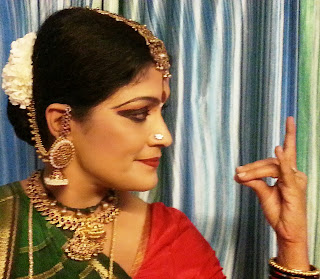 At heart she is a bhakt, and her dance reflects the inner devotion. Geeta Chandran performed at the Ayyappa temple in Delhi on the 7th of December, in a programme titled ‘Bhakti Manjari’ where she presented traditional items from her classical repertoire, that showcases the temple origins of Bharatnatyam.

Geeta is an exponent of Bharatnatyam who needs no introduction. Her sweating in the month of December shows how much an effort it takes to give a perfect performance, talking about which, she said, “The varnam has been with me for twenty years. I have visited it quite a few times and two years back, I performed it at the Kala Kshetra. It is a favourite of my guru. The raga Karahara Priya is a beautiful one. This varnam is a complete piece and has every single emotion that can be imagined of the nayika in love. Dance is an extension of one’s self and I always feel while revisiting this varnam that I encounter something that I have experienced. So many layers keep opening up. Anayas hi jo rehearsal mein kiya, uss se kuchh different hota hai. The musicians also say that it was so different from what has been rehearsed. You flow with the stage, the audience, the aura and the mood of that day. I would not have been able to fathom this when my guru said that you improvise on stage, but now I know how it happens.” 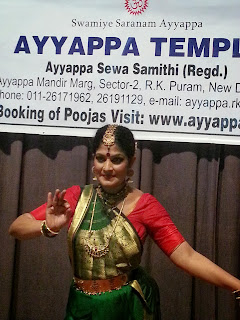 “The Thyagaraja composition that I performed, I do not do it on stage often since the poetry is heart wrenching. He is a vagyakara and he must have written it at a very poignant moment in his life when he must have reached a dead end, asking his Lord if He is ever going to give him a glimpse. A lengthy composition may not take so much of an effort as this one does as it just goes inside you and wrenches you. It feels as if you are talking to that divine spirit and asking for some kind of light on your path. So I do it at home but on the stage with so many other things going on, I don’t do it. This being a temple and a sacred space, I did it here. It is an intense piece coming from a very spiritual plane.”

The first piece was Ayyappa kirtanam in ragam Gawlai aditalam, composed by Vidvan N Krishnan. Next was a panchakshar stotram, a Shiv stuti, expanding on the five syllables – na, ma, shi, va and ya. She presented the philosophy hidden behind each of these syllables. Na is feet, ma is nabhi, shi is shoulder, va is face and ya is hair. It is composed by Adi Shankaracharya as an invocation. The stotram has been revisited by Geeta a few times. Lord Shiva is worshipped as Nagendraharaye, Trilochanaye, Maheshwaraye, Digamberaye, Neelkanthaye, Yakshaswaroopaye, Gangadharaye and Jatadharaye. Geeta portrayed all these attributes of the Lord with perfect abhinaya, gestures and balancing stances. The magnificence of the Lord was depicted. 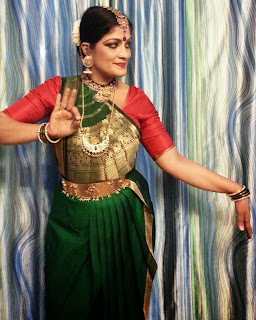 This was followed by a Devi stuti – Amba Shambhavi. Geeta portrayed the aspects of the divine feminine energy based on imagery from the Markandey Puran. The Goddess is the mother, sister, consort. She is the mother earth. On the one hand, she is attributed with beauty and karuna, and on the other, she is ferocious enough to fight evil. Amba, Shambhavi, Chandramouli, Abla, Aparna, Uma, Parvati, Kali, Hemvati, Shiva, Trinayani, Katyayani, Bhairavi, Savitri, Navayauvanai, Lakshmi, Raudrakarini, Jwalamukhi, Vaishnavi, Chamunda, Bhagwati and Rajrajeshwari – each of these names depicted in dance are diverse avatars of Devi in different forms, with opposing attributes.
Each was depicted by Geeta through flawless gestures and stances, having the desired effect of revering the Devi in her various roopas.

The following piece was a varnam. It was a beautiful blend of nritta with all its energy, and abhinaya with all its subtleties. The nayika, who is in love with Lord Shiva, tells her sakhi that her heart is overflowing with passion for Him. “Madana is tormenting me,” says the nayika, “My Lord, who is the great yogi at Chidambaram, whose yoga is the grand dance with one foot raised, will he come to serenade me today? Today the lovely moon, which was once witness to our love, is tormenting me with harsh fire-like rays. My heart is withering with longing, O friend, do go and bring my Ishta Devata to me. O sakhi, I have none to fear. I love Shiva and openly declare my love for Him.” The interspersed nritta had a lot of energy and technique. The nayika, who was depicted collecting flowers in the forest while she enjoys the rain and the song of the cuckoo, talks about her longing. The abhinaya ended with the heroine’s unabashed declaration of her love. The varnam was a composition of the Late KN Dandayudhapani Pillai. 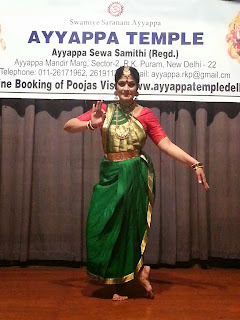 Geeta then danced a moving Thyagaraja composition in ragam Varali, Mishra chaputalam. The verse is about longing that a devotee experiences after years of prayer. “O Lord, what is the meaning of my life if I cannot see you and interact with you? My life is meaningless if I cannot gape at your lotus face, more radiant than a million cupids. I long to gaze at you afloat in the cosmic ocean of milk resting on Adisesha. My mind is in turmoil, O Rama, do not delay in revealing yourself to me.” Geeta did some awe-inspiring abhinaya to depict the emotion of yearning. Life is not about eating and sleeping. The bigger purpose is of worshipping the Lord Rama, who has meen nayan, a parrot-like nose and lips like bimba-phal. The reclining Lord was depicted by a balancing stance. The emotion portrayed was that of a devotee worshipping the Lord, not for any material gain, but only to have a glimpse of Him. But even after a lifetime of selfless praying, he does not get a glimpse of his Ishta devata. His heart is filled with sorrow and bleeds with viraha when out of his desperation, he speaks to his Lord. Geeta then concluded her performance with the sankirtan Vanamali vasudeva jagamohan radha ramana.
Email Post