Let your heart swell for the Yamuna 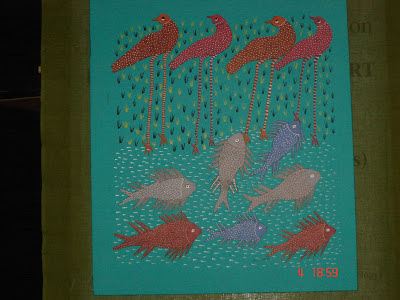 Justin McCarthy is an American-born noted Bharatnatyam dancer, instructor and choreographer. After performing as a soloist, he has been teaching Bharatnatyam at the Shri Ram Bhartiya Kala Kendra in Delhi for the past 20 years. While talking about the production – Naukacharitramu – Justin said, “I am very thankful to the musicians for the wonderful music and singing. I was initially inspired by the songs of Thyagaraja, to compose and choreograph this piece, but I did not stick to the original story and changed a few portions according to contemporary sensibilities. But I did retain the original songs. The part about the theft of the flute was inspired by Kangra miniature paintings.” The stage setting had a painting of gulls and fish in a river. Later on, an illuminated white boat was brought on the stage to depict ‘Naukacharitramu’. 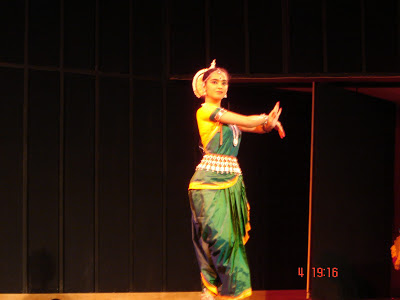 Supriya Nayak has trained in Odissi under the guidance of Padmashri Guru Kiran Sehgal at Pallavi Odissi Nritya Sangeet Vidyalaya. She has performed in India and abroad. Supriya, while talking about the conceptualization of the performance, said, “Justin asked me to work on a programme with Krishna, gopis and Yamuna. He left me free to work with any part of the theme. I was very comfortable working with a theme on Krishna, since that is a part of the Odissi repertoire. But gradually as the theme evolved, Yamuna became the focus of it all. So conceptually, I started thinking about pieces to connect Krishna and Yamuna. The last piece from ‘Yamunashtakam’ was done to take the programme to its completion. The ‘Ashtapadi’ was choreographed by my guru about 20 years back. I enjoy doing it because I try to figure out whether Radha is happy or sad or reminiscing.” 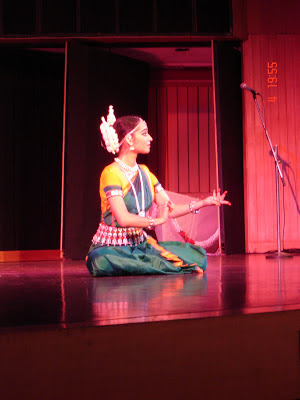 The performance began with Supriya doing a ‘pushpanjali’ and ‘bhumi-pranam’. Then came a ‘mangalacharan’ – an invocation to Lord Jagannath. After the chanting of the shloka –‘mangalam bhagwan Vishnu, mangalam Garudadhwaja, mangalam Pundarikaksha, mangalay tano Hari’ – Lord Krishna is depicted as one who plays on the flute on the banks of the river Kalindi, mesmerizing the lotus-faced gopis. Lord Jagannath is worshipped by Bramha, Shankar, Indra and Ganesh and is addressed as the ‘Nayanpathgami’. The mangalacharan act concluded with the ‘vikhandi pranam’ or three salutations to God, the Guru and the Rasika. The composition was in Raag Pahadi, taal ektaali, by Guru Mayadhar Raut. Supriya had very finished and crisp movements. The second piece was a pallavi, a pure nritta piece. The sculpture-like poses adopted in this dance were borrowed from the rich legacy of temple carvings in Orissa. The pallavi was in Raag Mohana, taal tripata, again a composition by Guru Mayadhar Raut. The technique of the dance was perfected by Supriya with some fluent moves and leaps.

The next rendering was an abhinaya piece based on a poem by the 18th century Odiya poet, Gopalakrishna Pattanayak - ‘Muhan Muhin Kisora’. Radha narrates an unexpected encounter with Krishna. She says that she came face to face with Krishna on the banks of river Yamuna while she had gone to fetch water. As she is sitting on a rock, leisurely washing her body, her hair open and in disarray, she is embarrassed when Krishna holds her hand and tries to hide in the river. But Lord Gopalakrishna comes to her rescue. The composition was in raga Bageshwari, taal jati and the choreography was by Supriya’s guru, Kiran Segal. Supriya did the abhinaya with excellence, enacting both Radha and Krishna.

The fourth piece was based on ‘ashtapadi’ by Shri Jayadev. ‘Ashtapadi celebrates the love of Radha and Krishna and is an integral part of the Odissi repertoire. In the ashtapadi –‘Raase Harimihe’- Radha is consumed with jealousy and walks away from Krishna as he is romancing the other gopis. Hiding in a grove of creepers, she confides in her sakhi that her mind remembers ‘Hari’ during the raas and talks about his ‘chhavi’ or beautiful looks. “The sound of his flute was like sweet nectar, an ear ornament swayed gently against his cheek, his hair surrounded by peacock feathers and his dark body akin to a monsoon cloud illuminated by a rainbow. His face marked by a tilak, shamed the beauty of the moon. He passionately embraced each gopi.” The composition was in raga Bairagi, taal jati and the choreography by Smt Kiran Segal. The depiction was about Radha- virahti vane, kunjan, gunjan madhup. ‘Raase hari vihit vilase, smarati manohar, adhar sudha madhur, mayur shikhi pichh, chandan tilak’. The entire abhinaya piece was done with beautiful expressions and grace. Supriya’s depiction of a forlorn Radha was commendable.

Finally, Moksha is the culmination of an Odissi presentation. The river goddesses Ganga and Yamuna are intrinsically related to Moksha or deliverance from the cycle of life. Ganga escorts the dead, Yamuna saves them from the netherworld, and both cleanse humans of impurity and sinfulness. It concluded with a shloka from Shankaracharya’s Yamunashtakum – ‘kalindanandini’, the daughter of Kalinda, who carries with her water the colour of Krishna, for whom all are equal, ‘trilokshokaharini’, who destroys the sorrows of the three worlds and who washes away impure thoughts from our minds. The entire performance was very impressive and since Odissi requires a lot of flexibility, Supriya showed a lot of grace and poise. The vocals by Shri Prashant Behera were quite strong. The bansuri by Vijay Kumar Surendra was very melodious, sitar by Riaz Ahmed Khan, and mardala by Surendra Maharana. 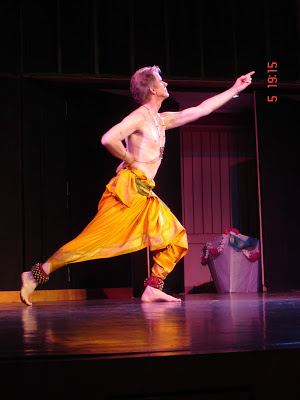 The next evening, Justin McCarthy gave a Bharatanatyam performance. The recital began with a Ganesh kauthuvam, an invocation of Lord Ganesha. A piece on Krishna and Yamuna followed, in raag Yamunakalyani. The opening melody of the kriti, Nandagopala by Dikshitar, was juxtaposed against salutations to Yamuna, the river goddess. These salutations were taken from Yamunasahasranama by Shivlata Misra Shastri, a composition of a thousand names for Yamuna devi. Krishna is worshipped as Nandagopal, Mukund, the one who does vihar on the banks of the Yamuna. He wears nupur in his feet and is the beloved of all gopis. He is also the makhanchor, stealing butter from the gopis. Yamuna is worshipped as aaradhyani Yamuna devi, ‘bhajami namami Yamuna vegam, vegavahini, pushpa pallav vahini, kalindi, shringarkarini, vrindavansundari, ramaniya devi, shrinarayan hriday raag tarangini’. 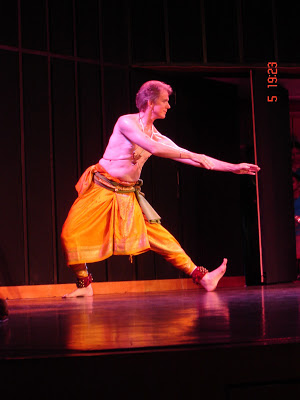 Justin is a dancer with great technique, footwork, balancing stances - all executed with excellence. The abhinaya was impressive, particularly the cows looking up to Krishna with innocent love in their gaze. The musicians appearing with him were Sudha Raghuraman on vocals, Shri G Raghuraman on flute - a couple who need no introduction - MV Chandrashekhar on mridangam, and Shri Diwan Singh on the tanpura. On both evenings, the solos were followed by a dance drama based on the Naukacharitramu, a set of songs written by Thyagaraja. 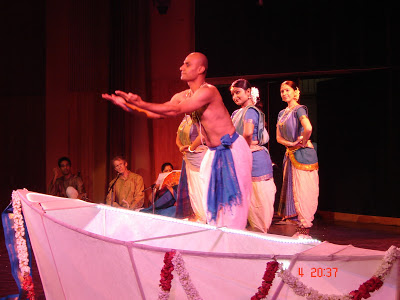 After praying to Ganesha and Saraswati, the poet-musician begins the Noukacharitramu, a charitram or leela that occurred on the boat. On a fine day in Vrindavan, the gopis describe the shining waters of River Yamuna. They sing, ‘O friends, look at the beauty of Yamuna devi’. The kokil sings at her banks and kusum or lotuses bloom in the river. Lord Vishnu, who is worshipped as chaturbhuj and resides on the sheshnag in Vaikunth, lives in the forests of Vrindavan in his avatar as Krishna. The gopis gather on the banks of Yamuna, all dressed up to play with Krishna. But they decide to go for a ride on the waters of Yamuna on a boat without Him. They say, we will ride the waters of Yamuna while Krishna watches us from the shore. Krishna requests the gopis to take him along on the boat. While they remind him of his mischief in the past, he reminds them of his good deeds, like ridding the waters of the Yamuna of the Kalianag. Finally, they agree to take Krishna with them. The gopis row the boat while singing and dancing with their beloved Krishna. The joyful and delirious gopis ask each other, what great penance and charity must have we performed in previous lives to deserve the privilege of being Krishna’s favourites in this life? Krishna, alarmed by the gopis’ swelling pride, tells them to row towards the west. The gopis think he’s playing a trick and scold him while continuing to flaunt their beauty. Intoxicated with pride, they tell Krishna that their beauty is unequalled, and have the audacity to tell him that he is caught in their net. The gopis steal Krishna’s flute. Krishna creates a storm on the river to teach them a lesson. As the boat begins to sink, the gopis pray to Yamuna devi to save them. Full of shame and fear, the gopis return the flute and pray to Krishna to show them the way. Krishna takes on his chaturbhuj form and tells them to close their eyes and meditate. As they meditate upon his lotus feet, the storm dissipates. The padarvinda that are worshipped by Sanakadi are in their thoughts. They worship Krishna with flowers and incense. The lesson learnt by the gopis, which is for all beings, is that your ‘aham’ or pride has to be given up to be one with your lord. 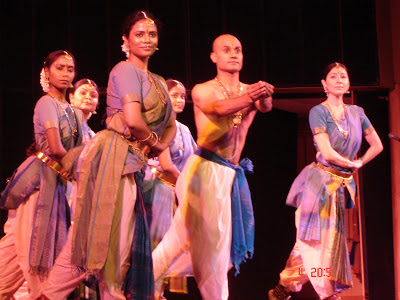 The dancers showed some excellent technique. The footwork, the stretches, the hands, the leaps – all were rendered with perfection. The abhinaya was riveting, they never fell out of sync and the expressions of the gopis were laudable. Plus, the voice of Sudha Raghuraman leant an excellent narration. On the flute was Shri G Raghuraman, natuvangam - Justin, tanpura - Diwan Singhji and mridangam - MV Chandrashekhar. The entire team’s effort collectively created an inspiring performance. The dancers were Lokesh Bhardwaj, Madhushree Datta, Abhinaya Penneswaran, Katrina Mogra, Veena Kumar, Ashwathy and Bharathi Penneswaran, all of whom have been or still are students of Shriram Bharatiya Kala Kendra. They were joined by Vishnupriya, Andrea and Brinda, who are students of Bharathi Penneswaran.