A season of love 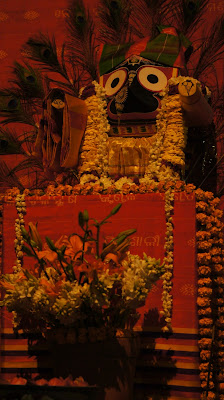 Jayadeva’s  ‘Geet Govinda’ is lyrical poetry divided into ‘prabandhas’ which contain couplets grouped into eights called ‘ashtapadis’. These have a very important place in Indian classical dance and music. ‘Ashtapadi’, the dance festival, explored this exquisite poetry in different genres of dance.

The 9th of March featured bharatnatyam recital by Sathyanarayan Raju and Odissi by Madhavi Mudgal at the Kamani Auditorium in Delhi. The idol of Lord Jagganath on the stage created an aura of ‘bhakti’.  Each of these dancers interpreted the excellent lyrics and description of divine love by Jayadev in their own style.

S Raju is a Bangalore based bharatnatyam dancer. He is a senior student of Late Guru Narmada. He has performed extensively and won many awards. This is what he had to say about the performance, “This is my first experience with Geet Govind in Delhi and it is an experimental one. I have been used to doing ‘javalis’ and ‘jatis’. This performance on the ‘Ashtapadis’ has been an eye opener. I have been thinking of going deeply into ‘Ashtapadis’.  I took help from my colleagues for the abhinaya and I expect to get more chances to work with Geet Govind.”

Madhavi Mudgal is a renowned Odissi dancer. She is the disciple of Guru Harekrishna Behera. Her Odissi skills were refined under the tutelage of the legendary guru Kelucharan Mahapatra. She is a recipient of the Padma Sheri (1990) and the Sanger Natak Academy Award 1996. She is a soloist as well as a choreographer. Madhavi Mudgal, when asked about the choreography, said, “For Oddisi, it is the ideal piece of literature since Jayadev is connected to Odissi. Jayadev wrote lyrics for his wife Padmavati to dance in the temple, so there is a deep connection. I am grateful to the festival to have given me an opportunity to dance and explore more and more about Ashtapadi, which is a very spiritual and philosophical piece of literature. As you go deeper and deeper, you discover many more layers. The abhinaya is about Radha and Krishna, their meeting, their separation and how they react to different situations.”

Sathyanarayana Raju began his performance with the Dashavatara stotra. The Dashavatara stotra is an invocation of the ten incarnations of Lord Krishna, who is worshippped as the avatari. The lord descends to the earth to vanquish evil. The music was composed in Raag Mallika in Adi Tala. ‘Jai Jagadish Hare’ is the refrain in the stotram. ‘Krishnaye tubhyam namaha’ is a shlokam to pay obeisance to the Lord.

The first of the ten incarnations of Lord Krishna  is the meena or the fish. At the time of pralaya, or flooding of the earth, the lord takes on the form of a fish to save the species and scriptures on the earth. Raju depicted the meena avatar with one leg stretching backwards and balancing on the other. The second is the kachchhap or tortoise avatar. At the time of amrit manthan, the demons and the devatas churn the seas for amrit or nectar. The Lord takes on the form of a tortoise to support the mountain used as a pivot. Raju almost bent over to form a tortoise.

Next it was the sukar avatar that was depicted. The fourth incarnation is the narasingh avatar. Raju depicted the child Prahlad chanting the name of the lord and being admonished repeatedly by his father. When the father tries to kill his son, the lord appears as the narasingh who tears apart the demon. He is then appeased by the pleading child. Raju has very expressive eyes. 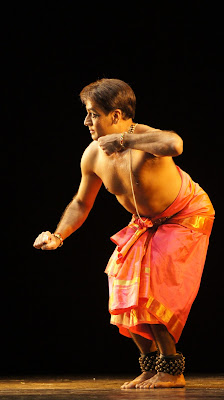 The fifth incarnation is the vamana avatar or the dwarf. While telling the tale, Raju shows the king Bali proudly distributing alms to all who come to him. Nobody leaves his door without his wishes being fulfilled. So when the lord appears as the dwarf and asks for three feet of earth, the kind readily grants it. The lord immediately becomes a giant and measures the entire universe in two strides. For the third stride, the king has to surrender himself.

The next incarnation depicted was Lord Parashurama, who took the oath of ridding the face of the earth of all Kshatriyas. The seventh incarnation is Lord Rama, who defeated Ravana in a war to vanquish the demon. The eighth avatar is Haldar or Balarama, who is the brother of Lord Krishna.

The next avatar depicted was that of Lord Buddha, who promoted non-violence, put an end to animal sacrifice and preached peace. Finally, Raju depicted the Kalki avatar, riding on a horse and the saviour of mankind in Kalyug. To end the piece, S Raju did a summation of all the incarnations. In the entire piece, the tempo, grace and energy were maintained with pure dance interludes. The abhinaya was an integral part of the piece.

His second piece was based on the 19th verse of the Ashtapadi. Krishna tries to assuage Radha, who is annoyed with him. He tells her to speak a few words to him so that he can see her teeth shining. He tells her to embrace him. He expresses his passion towards her and tells her that she is his jewel. ‘Priya charushile’ was based on Raag Janjhoti. The song is known as Sanjeevani since it can put life into the dead. Raju used a peacock feather to depict the teasing and romancing of Radha. Krishna calls Radha ‘sumukhi, tavavadana chandrama chakor, mukh kamal madhu paanam, twamasi mama bhushanam, mama jeevan’. Krishna makes her wear his ornaments, his morpankhi, and gives her his flute to play. 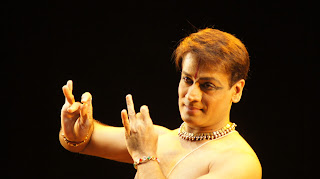 The next piece he performed was based on the 23rd Ashtapadi. The composition was based on Raag  Dwijavanthi. This was again a romantic piece with shringar rasa. Krishna invites Radha to a soft bed of leaves and asks her to put her feet on it so that he can massage her lotus feet. Raju, while dancing for the piece, shows Krishna preparing the bed of leaves (kisalaya). Radha’s feet are like petals which Krishna wants to take in his hands and massage (sevit charan). He wants to drink the amrit from her lips. The two pieces involved a lot of abhinaya, which was evocatively executed. It was Raju’s eyes that were doing all the talking between Radha and Krishna. Accompanying him were S Srivastava on vocals, V Shakuntala on natuvangam, SV Balakrishna on mridangam and Vidwan Raghuram on flute. 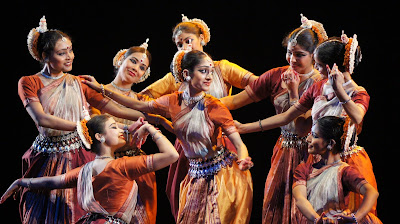 The second dancer to perform was Madhavi Mudgal. The first piece danced by her disciples was ‘Chandan charchita’ in Raag Adibasanta. The season of spring is characterized by blooming colourful flowers and the cuckoo singing on the branches of the trees. The lord’s neel kalevar is smeared with chandan. He is playfully hugging and kissing the gopis who are clinging to him. It was a performance done in group format. Aarushi Mudgal played Krishna. The flowers are in full bloom and the honey bees are hovering over them. The season evokes the feelings of romance, and the god of love, Kandharph, is inciting all – ‘kokil kujati kunj virahati hari saras vasanta’. Aarushi is quite a promising dancer and the piece had good pace, footwork and group coordination.

Madhavi Mudgal did a solo next on the 9th Ashtapadi based on Baageshwari. The sakhi related to Krishna the sufferings of Radha, who is frail without him - ‘Krish tana radhika tava viraha keshava’. Her eyes are constantly filed with tears and she does not perceive any pleasures because of the fire within her. She stands with her hands on her face, which looks like a 'bal shashi'. The following piece from the 13th Ashtapadi was based on Raag Shri, a composition by Madhup Mudgal. An anguished Radha waits for Krishna at the appointed time, but he does not make an appearance. Her navayauvana roop, she thinks then, is worthless. The manibhushan she wears are all a burden on her. She has been betrayed and arrows of sorrow hurt her. Both the pieces involved very intense emotions of viraha in Radha, which were portrayed with sensitivity by Madhavi Mudgal. Her accompanists were Pradipta Kumar Mehrana on pakhawaj, Kiran Kumar on flute, Yaar Mohd on sitar and vocals were by Manikuntala Bhoumik.