Rhyme and season : Footprints on water by Aditi Mangaldas

At times, you get to watch something that transcends reality. It transports you to a different realm, another world. At this performance by Aditi Mangaldas, the stage no longer felt like a stage, Aditi was not Aditi and I was not the audience. My mind became one with the dancer, swirling and dancing and relishing the various seasons that she was depicting. This is how I would describe the experience of this performance. 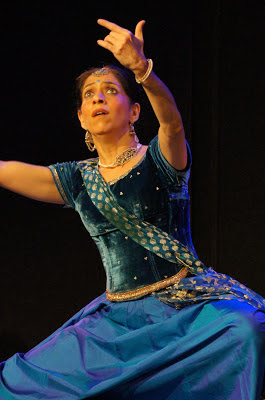 On Tuesday, 6th February, Aditi Mangaldas performed at the XI Jivan Pani Memorial Festival at IHC in Delhi. The scents of the upcoming spring season were already in the air and the flowers around were enhancing them. 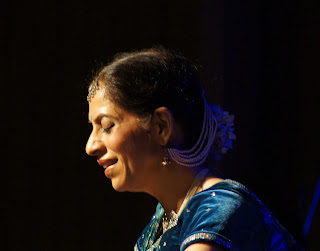 She performed to a composition titled Footprints On Water. It is a sojourn through the six seasons of the year, with their varied moods, colours and feelings. For the evening, she danced on the later three seasons – varsha, sharad and hemant. “Shri Jivan Pani was a mentor to me. He helped me immensely through his great understanding of various texts. I have chosen to perform a production in which his help was invaluable. One of the pieces is danced to a poem written by him.” 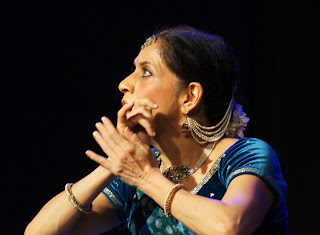 The lyrics of the verses on varsha were ‘saavan aayo sajani’. Aditi wore a blue-grey blouse and odhni. She depicted the rainy season by showing the thunder in the sky, the lightening and then the rain, dancing a traditional bandish with padhant. The raindrops fall on the nayika, wetting her face. She chides the clouds for wetting her. She closes all her windows and doors and draws the curtains and then sits in front of a slit in the window to enjoy the rain. Aditi showed the woman combing her hair and then tying them into a knot. The peacock dance was done beautifully by her. The craning of the neck at the sound of the thunder, the spreading of the wings and then the dance at the sight of the rains were all executed immaculately. The shivering birds perched on the trees were shown by her hands. She concluded the piece with chakkars. Her entire body spoke when she danced. Her feet thundered like the thunder, her hands flitted like the lightening, and her eyes followed the raindrops. 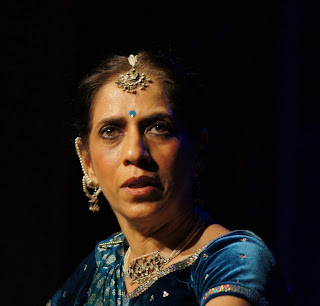 The next season is sharad or shishir. Shlokas from Ritusamhara were sung for the depiction. Aditi changed into a green blouse and a white odhni. She began with depicting the nayika dressing up and wearing her ornaments. The clouds float like white lotus buds and the ponds are covered with blooming lotuses. She depicted the swans that are swimming in these ponds. And finally, she carried the imagery forward to show that the nayika removes her bead ornaments and scatters them on the earth to give it that white and sparkling look. The actions left the audience awestruck. To me, it was a moment of pure ecstasy. 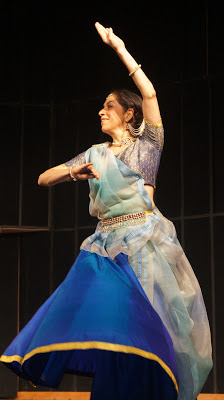 The verses for ‘hemant’ were also from Ritusamhara. The brief interval between the two seasons was filled in by some excellent playing on tabla and pakhawaj by Ashish and Mohit. Aditi re-emerged in an earthy rust odhni to depict the colour of fallen leaves. She danced to a poem by Dr Jivan Pani translated into Hindi by Dr Madan Gopal Singh. Gauri Diwakar recited the poetry. In this piece, she portrayed the falling leaves in the autumn. As the wind blows, the leaves keep falling one after the other, none knowing which leaf will be the first. Maybe it is the wind that knows – ‘pooche kyun hawa se’. The entire piece she did with intense abhinaya, sitting down and using her hands and expressions. The gist of the poem by Dr Jivan Pani was that the hills are covered by the fallen leaves and it is dried leaves that are covering the visible surface of the earth. This fall is unstoppable. Aditi then went on to collect these leaves. The parallels are drawn between the season and the nayika, who has been deserted by her lover. She says that when her lover left her, he took away all the seasons of her life and left her with fall or ‘hemant’. There is a haze of fog in her life. The falling leaves show the falling of all her desires. The zig-zag movement of her hands of fluttering fingers depicted the falling leaves. The pain of the nayika was brought alive by Aditi’s expressions.

How did she translate the texts and verses into dance? “The production was conceived in 1996. Here, the verses were not literally translated, but the essence of each season was taken and transformed into dance movements and abhinaya,” Aditi said. The text read out before each piece was written by Rachna Yadav and was a translation of some of the Sanskrit verses. The haiku poems in hemant were also translations. On being asked why it was called Footprints on Water, she said, “Footprints on Water is about six seasons. Seasons are transient, each season seems as though it’ll last, like a blooming flower, but very soon that will change. So nothing is permanent. Like footprints on water, one may want to have a footprint but can’t.”

Mohit Gangani on the tabla and Ashish Gangani on pakhawaj are youngsters whose talent is already showing. Vocals and harmonium by Faraz Ahmad and sarangi by Nasir Khan provided excellent accompaniment. 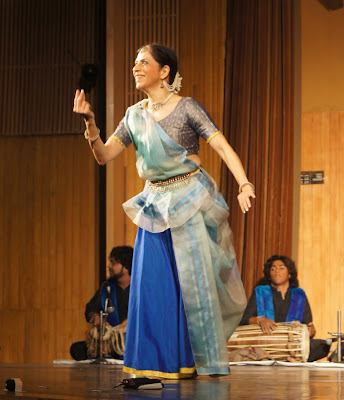