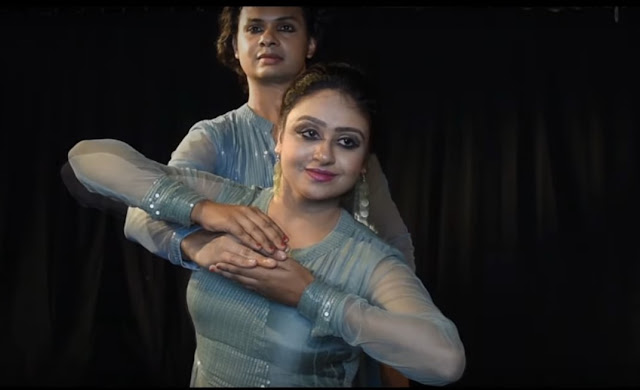 Kathak dancers Raina and Kadam Parikh are the disciples of gurus Ishira Parikh and Maulik Shah. These young choreographers are making their distinctive voice heard in Kathak. They lead dancers of the Aanart Dance Company, senior faculty members at Aanart School of Kathak Dance and visiting faculties for the Bachelors’ programme in performing arts at Gujarat University, Ahmedabad. They are also both the graded artists of Doordarshan. I watched a few of their performances on social media during the pandemic. The young couple has a very pleasant presence. They can set the stage on fire with their chemistry and romantic interludes. The first performance I watched was their duet for the Sangeet Sankalp Saptah 2021. The duo wore red and yellow complementing costumes. The first composition was a Krishna pad. The composition was about the various aspects of Lord Krishna and the various names that have been attributed to him: kunjabihari, murlidhari, giridhari, mayur pichchdharin. ‘Peet vasan dhari giridhari’: the lovable leelas of Krishna were elaborated through dance, including the maakhan chori leela, gagri phoran, Govardhan leela and the Kaliya daman leela. The duo depicted the torrential rains and the lifting of Govardhan by Krishna through nritya and bols, ending the piece in nritta. The formations and gestures were executed with ease and dexterity. 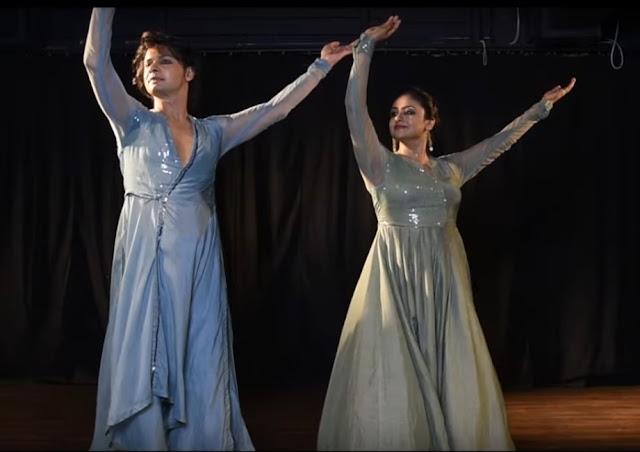 The next piece was a pure nritta piece called Yugm, or Yugal. Here, the lasya and tandava elements of dance were brought out by dancing to the bols and doing an interpretation and infusing energy at different levels according to tandava and lasya. Then they presented nrittpaksh in ektaal – bandish and uthaan – where they danced in opposite directions. They did the gaits of the vihang flying, sarp and hiran. For these, they took sarp postures, gestures of the birds flying and then did tisra mein uthan. They did a tihai with the bol ga di gin. They did tisra aur misra mein bol and then a 21 chakkar ka tukda. The precise footwork was neat; they crossed over and changed sides, and did so with perfection. 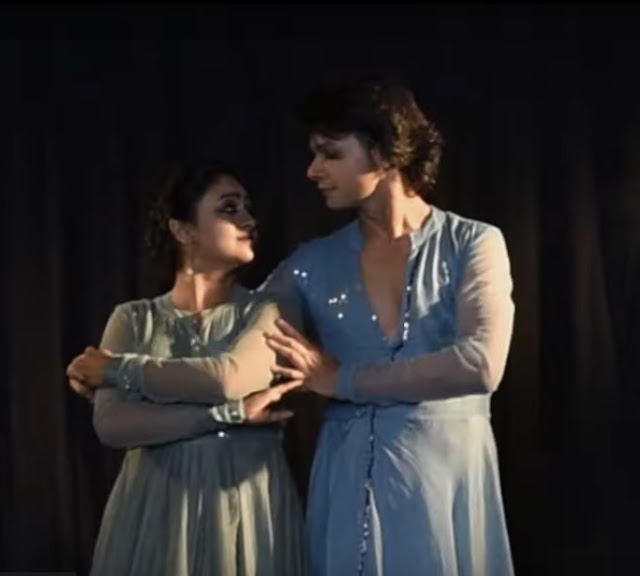 Next was a Shakti Aradhana, a Durga stuti (kavit) composed by their guru, Ishira Parikh, in raag Bhairavi. The composition, ‘Devi, jag janani bhavani, jaya jaya ho durge, tav charane mam sharane’ was an ode to Goddess Durga, showing her attributes and the vanquishing of Shumbh Nishumbh and Mahishasura. The fights were enacted by both through nritta and bols. In between, they included a few parans in jhaptal.

Though the performance was streamed online, it was performed physically on stage and the duo were accompanied by Sapan Anjaria on tabla, Prahar Vora on vocal/harmonium, Hriday Desai on sarod and Naisargi Gor on padhant. 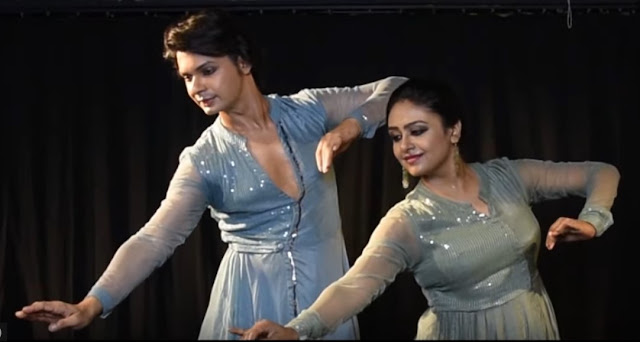 Another performance the couple did was ‘Tilak Kamod’ in collaboration with musician Nishant Mehta. The music had touches of contemporary and so did their Kathak. The costume they chose was in the subtle colours of blue and green. The composition was ‘Neer bharan kaise jaon sakhi ab’. Raina as the sakhi sits and reminisces about Krishna. He comes and gently touches her and disappears. He blows flowers at her, and adorns her hair with them. As she goes to fetch Jamuna jal he comes again and blocks her path. They enacted the chhed-chhad as Kadam appears to block her path. The concept and choreography for the video were by Raina and Kadam. Besides the music production and direction by Nishant, the composition featured Praher Vora on vocals, music arrangement by Nishant Mehta, Joby Joy and Mayank Panchal, rhythm arrangement by Joby Joy and Nishant Mehta, tabla by Joby Joy, flute by Shreyas Dave, and harmonium by Nilay Salvi. The beautiful sequinned costumes for this, which floated gauzily as they moved, were by Anuvi Desai. Raina and Kadam, like their gurus, have developed a very stylized Kathak without compromising on the form. Their technique is flawless. Their synchronization with each other, whether they move together or opposite, comes out flawlessly and is very aesthetic.