Bharatanatyam dancer and choreographer Divya Ravi has been producing some interesting content from her home during the lockdown. Along with her Carnatic vocalist husband Dr. Sharan Subramaniam, she has produced some made-for-camera pieces that explore the new medium to the fullest. She is among the dancers I have seen in the past year who are not simply filming stage presentations at home, but developing a new way of thinking about choreography amid restrictions that make stage presentations impossible.

One of her recent works is ‘Kanhopatra’, an abridged version of a potentially full-length work about the Marathi courtesan-turned-Varkari poetess Kanhopatra. I spoke to Divya about filming works like that, and dancing for the camera. 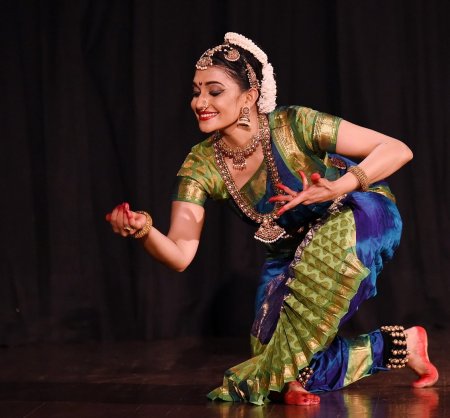 What happens to these short made-for-camera productions in a post-pandemic future?
Kanhopatra is a work in progress. And I do intend, at some point, to build it into a full-fledged work for the stage –about an hour and 15 minutes. Right now, it’s only a 30-minute work. I have all the material ready with me for the stage; because I had to do it in a digital format, I had trimmed a lot of the content, mainly to reduce the time, considering the digital attention spans of the audience. Even musically, when I take it to the stage, it will be a full-fledged orchestra. So far, we have only used the voice with no other instrument.

Most importantly, right now, it was dancing for the camera. So I have had to really tone down my abhinaya bit, keep it more lokadharmi, keep it as natural as possible. But of course, when it goes to the stage, there will be a lot more nritta, because the entire premise is Kanhopatra as a dancer. There is a lot more material, which I at this point had to trim a bit. But when I do it for stage, I think there will be a lot more coming in. As you said, I think now it is the hybrid age, where we are trying to showcase work digitally as well as physically. Even when we go back to stage . . . I’m sure the digital medium is here to stay.

It also provides accessibility. I create this work in the UK, but I have people from India to the US watching it. So even if they may not be able to make it for the physical event at a later time, there’s always the option of being able to watch it from wherever they are – at least an abridged version.

What do you think about the difference in the space of a stage and the space that you get on the camera?
Definitely, it’s a huge difference. When I performed this in my house, I had a limited space, so my movements have had to be tailored so that I can fit it all into the camera frame. And then we’ve had to take some close-up shots for abhinaya. So the choreography obviously, will be very, very different when it comes on stage, your entire being and the entire choreography will be largely different for stage. So even for me, it’s going to be interesting to see how this develops, at whatever point I want to take it on stage, how this develops from here choreographically. Although the idea is there, the thought is there, movement-wise, it’ll be quite a bit different.

When we are on stage, the entire feeling, the effect, is very different, both for the performer and the audience. It’s a three-dimensional effect, first of all, and then we are in that space, the space is so charged with the energy of the performance. It’s a musical, choreographic, spatial experience. But with the camera, all of that is not possible. First, it’s two-dimensional. Second, musically, they’re not able to experience that music as they would in the theatre, in the physical space. So then, in some way, you do have to make use of these technological bits, like the superimposing, layering, the subtitles – I mean, it’s an advantage as well. Like I’m able to give subtitles when it’s a full-on Marathi production and not many people know the language. I’ve been able to do all of that with the digital space, of course. Working with digital media had its advantages too.

Once it’s been digitally previewed, do you think you can travel with the production? Will it take away from its scope for a tour?
I don’t think it would because right now, at least the way I have devised Kanhopatra for the digital space, it’s only an abridged version. It’s a half-hour piece, but when I take it to stage, it will definitely be a longer one, it’ll be a more experiential one, there will be a lot more to it. While many people from across the globe might have seen it, what it will be when it goes on stage is something that only you can see if you are physically in that space. I do think it has the scope to tour because I’ve not put the full-length work out. Right now, it’s just a glimpse into her world, this digital premiere, so even all the people I know in Bengaluru who have watched it all said we have to see it on stage now. It will be so lovely to see how it is when it goes on stage.