Khidki Se . . . Seasons from my Windows was a film premiered on 5 June, 2021, by the Aditi Mangaldas Dance Company – Drishtikon Dance Foundation on the occasion of World Environment Day 2021. India was struck by the second wave of COVID which peaked during the third week of April 2021, and necessitated another lockdown in Delhi and in most parts of the country. The dancers of the Drishtikon Dance Company choreographed, performed and filmed this dance film, conceptualized by Aditi, about the changing seasons experienced by each dancer from the confines of their homes and from the limited prospect of their windows. They have presented their own interpretations of the seasons and how they felt during these times. The films have been shot by the artists themselves with the help of their friends and family and with whatever mobile phones or cameras they could get. So at times, in the movie, you do see the limitations of space and sound. The music for the pieces was composed by Faraz Ahmed and Ashish Gangani and was performed by Faraz, Ashish and Mohit. Gaurav Bhatti assisted with video editing and additional shots where required, while Drishtikon administrators Sangeeta Rana, Kusum Arora and Prajyolita Sarma coordinated the project.

The first piece presented was on sharad ritu, performed by Diksha Tripathi. The setting she chose was that of a terrace, possibly of her house, where there was a latticed parapet which she used as a ‘window’ to frame her face in the close-up shots. Diksha captured the mood of sharad by picking literature about sharad purnima. She started by dancing on the terrace as she catches a beam of moonlight. The video was taken while moving across the lattices in the parapet, and the setting where she is sitting under a jharokha where the moonlight falls directly on her was very aesthetically chosen. She went on to depict a deer coming for a drink in the moonlit night to a river, and watching the reflection of the moon in the river. The thaap of her feet on water in her balcony, near a vessel filled with water and flowers, was also a beautiful vision. As the poetry goes, ‘Aakul saurabh sameer chhal-chhal chal saras neer hridaya pranay se adheer jeevan unmalini’. 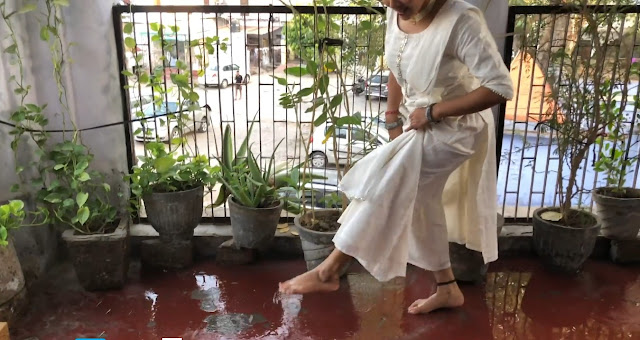 She depicted chandni with a shiver of her hand. The concept was very aesthetic and it was rendered in a very appealing manner by Diksha. The way the videography was done through the lattices of the parapet around the terrace added greatly to the feel of the video. The only technical drawback was the spoken vocals getting lost in some parts. It was a video shot very well with a strong sense of videography and Diksha’s technique came out perfectly in her nritta. The last scene was very touching, where she says ‘apalak drig ginte pal’ peeping through the lattices in the wall. The videography was done in a very natural, unpretentious way so that even when a monkey walked on to the parapet, it only added to the relaxed, natural feel of the video. For this piece, Diksha used the poetry of Sumitra Nandan Pant and was mentored by Dheerendra Tiwari. The music was edited by Minhaz Khan.

In the next piece, Gaurav Bhatti depicted hemant ritu, or patjhad, the dry season before the winters. The setting was appropriate, with glass panels all around, which showed the verdant foliage and the trees outside. He depicted, through chakkars, aamad, paran, the dead leaves falling, the wind blowing. For his conceptualization, he tried to incorporate the present situation, where hundreds of dead bodies have been found floating in the Ganga and buried in the sand on its banks. These were half-burnt bodies of what were probably COVID casualties who did not receive the proper last rites and were disposed of in the Ganga. The images were highly disturbing and Gaurav tried to incorporate this experience into his concept. Showing large, dry leaves fall from a dried twig, he depicted them as the dead bodies that he was lifting. 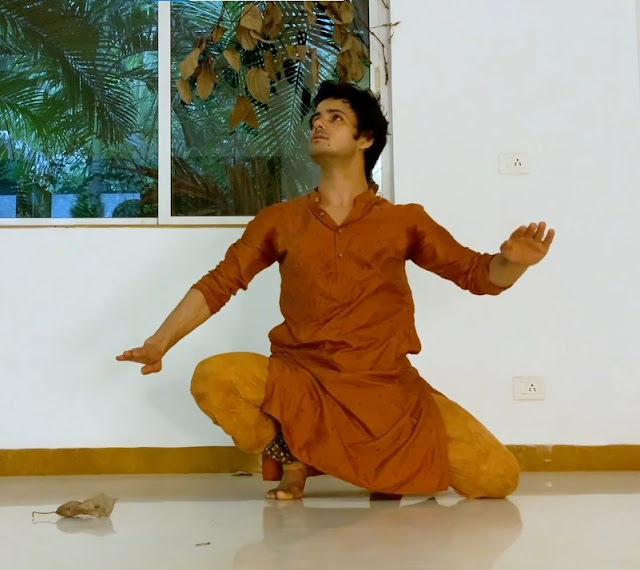 Finally, footwork on the dried leaves, crushing them into pieces, crushing the leaves in his hands, showing through his eyes and gestures the pain and disgust that he felt at that time. As the night falls, he closed his window with the moon shining outside. There were myriad emotions that were bottled up in individuals at this time. Why this era, why this pandemic, manmade or natural, why me and my loved ones and family, and then again, why not me instead of them? The revulsion of drinking a glass of water when you see images of dead bodies floating in the rivers brought the pathos, which was evoked by an aalaap by Faraz Ahmed at the end. I felt that maybe Gaurav could have worked a bit on his eyes to express himself better. For this piece, Gaurav used the poetry of Rachana Yadav and was mentored by Gauri Diwakar.

The next season was shishir, performed by Minhaz Khan. Minhaz started with arms moving in circles. It is still quite cold outside. As the literature says, as Minhaz acted it out, the pollen is being carried from the flowers and being blown into the eyes of the dancer. The dancer has tried to link the end of shishir and the beginning of summers with the help of poetry. ‘In my dreams, winter has worn spring’s clothing. Pollen dust is blowing in the air wearing a crown of thorns. Even the humble babool is glowing yellow. Spring, the king of all seasons, has arrived. Ah! But now that I am awake, alas! It is still winter.’ Minhaz used the backdrop of a room with a single window, with a latticed grill in front, and the videography was done mostly from outside the window. The room was totally dark with just a single light, hinting at the gloom of a winter night. 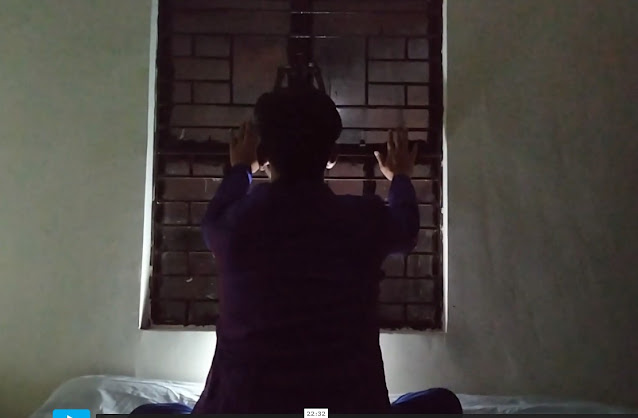 Minhaz did the piece sitting down, since he had just recovered from COVID. He is seen shielding his face from the pollen and then, he does the abhinaya for the humble babool tree, which is looked down upon, which is now wearing a kirit of thorns and is glowing in the spring sunlight. And as his dream shatters, he is seen standing outside alone in the dark. Minhaz’s concept and choreography effectively conveyed not only the gloom of a solitary winter night, but also the isolation and gloom that he probably felt during COVID. But of course, the footwork of Minhaz, a very agile dancer, was missed.

Sunny Shishodia performed the vasant ritu, which is the king of all seasons. He chose a room as the background and the videography was done from outside a window. The backdrop was a little dull for the season, though he chose to overlay that with stills of greenery, shrubbery and yellow flowers, but I thought it would have been better if he, instead of superimposing the images, had chosen to dance in a green patch instead. The season is full of life. He chose viraha for his poetry. The nayika opens the window and with a forlorn look, she waits for her lover. ‘Aavan keh gaye, beet gaye barso’. 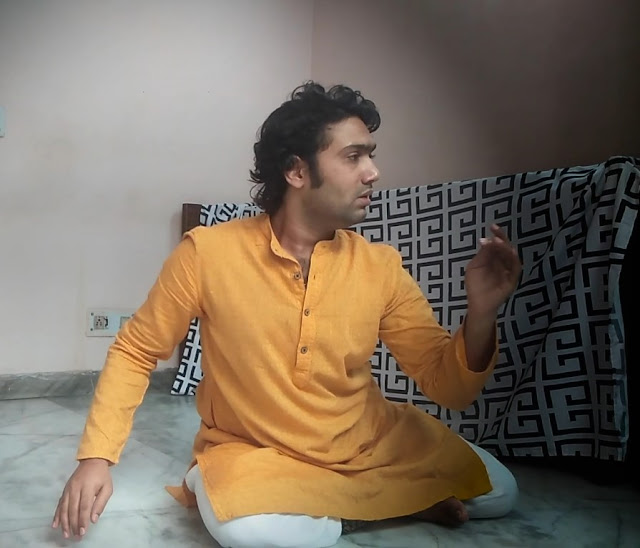 Here he went on to show the other aspects of the season where the sarson plants are blooming all around and the nayika decks herself up to meet the nayak. He was able to expressively get the emotions on his face and eyes and his nritta too was strong. The only thing missing I felt was that he could have done something innovative with the background. For this piece, Sunny used the poetry of Amir Khusrau, sourced by Gauri Diwakar, and Gauri also mentored him. The music was edited by Minhaz Khan.

Manoj Sonagra depicted grishma ritu. The setting that he chose for depicting the season was a landing with a mirror behind him, bright light shining directly on him, creating a reflection of the red colour of his kurta around him. He covers his face with his hands. The rising sun forms his shadow as the morning wind blows. 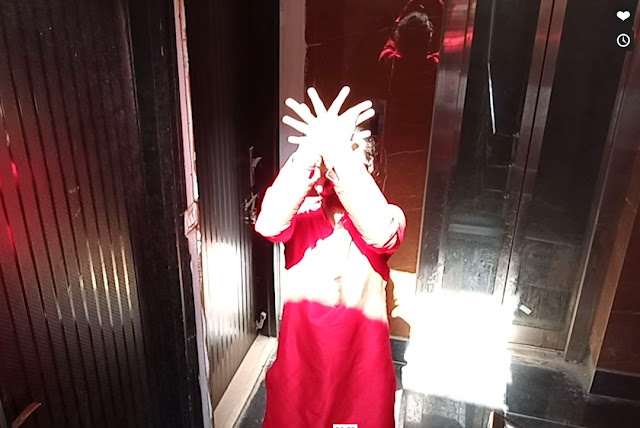 His nritta and footwork was very powerful as he danced on his terrace, depicting how the birds and the trees are being affected by the heat of the sun. Along with the sound of his footwork, the sound of the wind blowing was also captured during these scenes. For this piece, Manoj used the poetry of Nand Das, sourced by Gauri.

Varsha ritu was depicted by vocalist and composer Faraz Ahmed, tablavadak Mohit Gangani and pakhawaj vadak Ashish Gangani. If raindrops could get an award for dancing, then they would have certainly been awarded in this movie. For a parched and hot Delhi, the sound and visuals were a welcome sight. The sound of incessant rain, with aalaap by Faraz, was a welcome sound.

Mohit and Ashish followed, Mohit on his tabla seated in his balcony. As the literature said, the sound of thunder is music, the breeze blowing is heavenly, the smell of wet earth is pleasant. The movie starts with raindrops falling from rooftops and aalaap by Faraz, who is standing at a window with a grill, and the movie is being shot from outside. Ashish on his pakhawaj, sitting on his terrace, recited the bols and the composition ‘Badra barse umad ghumad ghan garje barse’. Mohit was on his balcony with his tabla and you can hear the sound of rain on the trees as a backdrop throughout the composition. Faraz in his very melodious voice sang the aalaap and the bols and Ashish and Mohit accompanied him on percussion. For this piece, the lyrics were inspired by Sanjeev Abhyankar and the music edited by Minhaz. 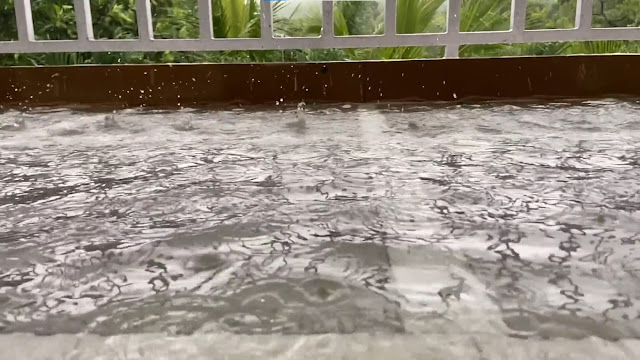 The last shot is that of water droplets falling on the terrace already filled with water and each drop, falling in slow motion, breaks into tiny droplets. That was the highlight of the very well-curated and executed dance movie. The entire movie is like an experience through dance and music of the various seasons, and also the present circumstances that have been created by the pandemic. The abhinaya and the nritta showed the creativity and prowess of the dancers. Gaurav Bhatti is a talented and perceptive dancer and choreographer. The use of the terrace by Disha, dead leaves by Gaurav, the solitary darkness and a mobile phone's torchlight by Minhaz, the mirror and the glare by Manoj, the sounds and visuals of rain by Faraz, Mohit and Ashish, made it a very relatable, almost visceral experience.