Once the stifling restrictions of the COVID-19 pandemic lockdown were relaxed, many performing artists began to hold online performances. Now, there is a veritable bouquet of performances being held online every day, though there are just as many debates and questions about the feasibility of carrying on digitally, the calibre of featured artists, the added expense of videography, the difficulties of income etc. However, one thing is indisputable – that artists are trying to bounce back and practice their arts with the full force of their creativity and with more motivation than before. Many arts warriors have organized professional, even paid performances and festivals to revive the arts after the shock of the initial lockdown.

Kathak dancer Sangita Chatterjee is one such artist who has reflected upon her art and the unprecedented situation of the lockdown and used it to fuel her performance. The production she put together single-handedly is titled Sant, Fakir and Lockdown Blues. This was preceded by a broadcast of Sangita's previous production Quest... A lockdown diary of a Dancer, which I have written about previously (you can watch it here).

The first piece she performed was a 16th century pad by Surdas, ‘Nayi barkha ritu aayi dekho mai’. In her depiction, she showed the play with the rainwater and getting drenched in the rain showers using expansive movements. The peacock gait was very graceful. The jhula was shown as strung up on a tree. Her red costume flowed around during her chakkars. She moved around the stage with jumps and leaps, depicting a koel in her hand. Later, she depicted the Kaliya daman leela, Govardhan leela and maakhan chori leela. The depiction brought the beauty and vivacious nature of saawan alive. Very expansive movements and footwork brought the piece to life. 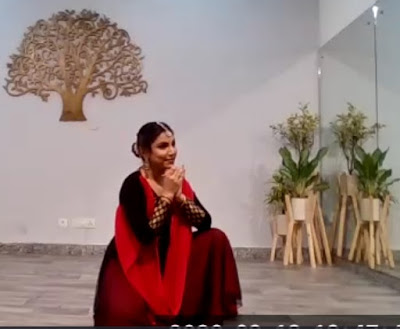 About this piece, Sangita said she realized that this poet-philosopher, initiated into the Vallabhacharya philosophy, had been blind since birth. So she asked herself, how could a person who has never seen the monsoon or the playfulness of a child and its mother write about it? And that when this poet lost his sight for outer objects, he developed an inner sight, an ability to see within himself what others saw outside, and this lockdown had a similar effect on the human senses. When the outer voices fade, as in the lockdown, when the senses become internalized, what comes out is very insightful. So in this, what we need to do is introspection.

The second composition was one by Rumi. The connection with your inner self is not always pleasant since it can give rise to despair and guilt. But the lockdown was a time to connect with the inner self. It was time to question your own preoccupations and it was then that Sangita connected to Rumi. Rumi is a 16th century Sufi poet. He said that you will have to break your heart to open it. As Sangita was trying to open herself up, she came across these verses from Rumi, which said the same, and she thought she would emerge stronger and realigned with the inner self. The composition selected was sung by the late Nusrat Fateh Ali Khan. The qawwali format of the composition was used to choreograph it into kathak. 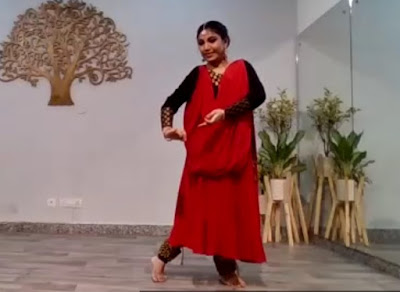 The third piece was a Meera Bhajan. When we seek happiness, we seek love, which can come to us in different ways. At times it is in a physical form and at times it is formless. Meera was married into a royal family in Mewar. She not only dropped her royalty, but also had to bear ostracism for her love of Krishna. What made her get through hardship was the strength of her love and devotion. For Meera, that devotion was in her love for Krishna. Sangita depicted Meera seated, doing pooja. The act of Meera leaving everything behind her was presented with attitude of abandon, showing the fearlessness of a bhakta. Even the vish pyala could not bring her to surrender.

The fourth piece was a composition by Kabir, and it was about formless love in every speck. Kabir was a weaver and connected the weaving process to that of the formation of the body. Chadariya is the sheet which covers the body and the body itself. The five tatvas are the five the elements and the ashta kamal are the energy chakras. Ram naam is the ra and ma of the breath. The poet says that nine months have been taken to weave this chadar, which is the gestation period, and the fools that we are, we spoil it. Sangita chose to refer to a red odni, spread out to show the chaddar, taking chakkars, stances and doing footwork. The odni then becomes an outer covering for our souls. She pirouetted with the red odni, with foot slides and stances. The lord is the Almighty and the one to cover everyone.

Sangita moved effortlessly with the mood and music of the compositions. Her choreography for each composition went along with the rhythm. I hope, in better times, she can put it up as a full production with live music and musicians. 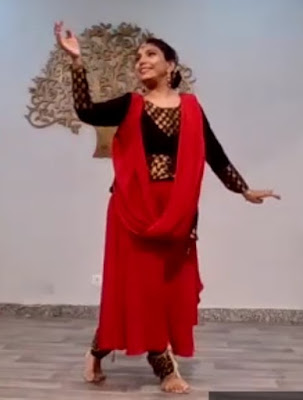 Later, I asked Sangita how she conceptualized the production. She said, ‘This was about my response to the lockdown initially, and then gradually revisiting the poetry of these poets and making the connection about the philosophy of a fakir. Who is a fakir? A fakir literally would mean a person who does not have any material possessions. But my interpretation at the end of this production would be that a fakir might or might not have had material possessions, but has a detachment to material things. During the lockdown, we had this realization that material possessions do not matter. What matters is that day, that hour and that moment. These philosophers were of the opinion that material possessions do not matter. Rumi was not a fakir. He was a maulana, but his heart was that of a fakir. I chose Surdas ji and a composition about monsoon since I wanted to highlight how someone who not seen the monsoons can describe them so well. It was because when you cannot hear the outer noises, it is your inner voices that become audible to you. It was the same with us during the course of the lockdown. When one of your senses are compromised, the others compensate and become sharper. Since he could not see outside, his inner instincts saw monsoon even better than what a person with normal vision could. 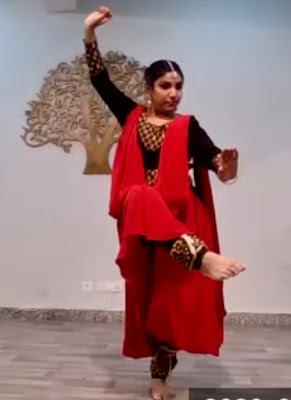 For the other saints also, it is the philosophy that is more important than the composition. Though our outward faculties were suppressed, the inner facilities were blossoming. I have already visited each of the compositions I have used, and they convey the same philosophy of detachment and internalization.’

Sangita’s thought process, forged during the COVID-19 lockdown, brings out a very pertinent point in these times, when possession and materialism means everything to our living. The choreography has been conceptualized well. She flows with ease to the rhythm of the music. I hope that sometime, she can put it up as a full stage production with live musicians.