Well into its third month, Vidha Lal’s curated series of performances by young Kathak dancers, Sankalp: The Journey Shall Continue, is gaining praise for its curation. Vidha is choosing some very strong young performers who will be a delight to see on stage whenever performances resume. Meanwhile, I am writing my impressions of the Sankalp digital performances at Vidha’s invitation.

For episode 10, Vidha presented Shivangi Mahajan, a disciple of Guru Mahua Shankar. Vidha emphasized the importance of padhant in Kathak and how it should be an integral part of riyaaz. She stressed on the need for the clarity of every syllable as it is recited.

Shivangi has done her Masters in Kathak and has been a disciple of Guru Santosh Vyas ji in the Jaipur gharana for many years. Mahua said that her wish to learn the nazakat of Kathak brought Shivangi to her, and that her performance would reflect the strengths of both Jaipur and Lucknow gharana.

Shivangi began her performance with a part of the Krishna Kripa Kataksh stotra, ‘Bhaje Vrajek Mandalam’. She depicted weaving a garland for the lord, performing pooja, aarti and dhyana very neatly with precision. She began her nritta section in teen taal, taking stances in thaat and subsequently thaat aamad, tez aamad, parans and tihais. She complemented her speed and stamina with complete movements.

Next was a thumri, ‘Mori gagri kahe ko todi re Shyam’, in which Shivangi displayed her progress with bhava. Next was a tarana in raag Gorakh Kalyan. For this piece, composition and sarangi were by Murad Ali Khan, sitar by Fateh Ali Khan, tabla by Abdul Rehman, vocals by Shuheb Hasan, pakhawaj by Rishi Shankar Upadhyay and padhant by Mahua Shankar. In vilambit laya, Shivangi took stances, and then proceeded to drut laya with footwork, ladi, aamad with 27 chakkars and footwork. Her precision at her hastas, footwork and chakkars showed her tayyari. With very neat footwork and a very fast pace, she gracefully took the final stance on sam. 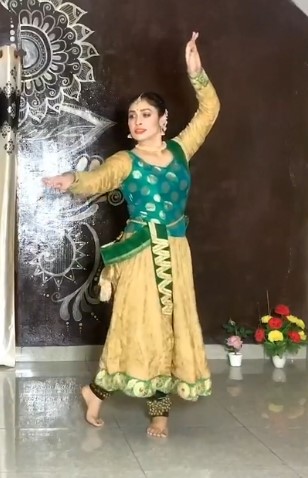 With emphasis on rhythm and grace both, the training of both gharanas showed in her dancing. You can watch her performance here: https://www.facebook.com/VidhaLalKathak/videos/646126752714053/