For three months now, week after week, Kathak dancer and teacher Vidha Lal has been presenting performances by talented young Kathak dancers from not only all over the country, but the world as well. She is also paying them an honorarium for these virtual performances staged despite the restrictions on public gatherings for performances. In the process, I have discovered one more dancer whom I will be keenly watching out for henceforth. I am writing my impressions of the Sankalp performances at Vidha’s invitation.

In the 13th episode, the dancer featured was Kadam Parikh of Ahmedabad. He is the disciple of Gurus Ishira Parikh and Maulik Shah. He often performs duets with his gurus’ disciple and fellow Kathak dancer Raina Parikh, who is also his wife and has performed solo for Sankalp a few weeks ago. Besides working professionally as a Kathak performer and teacher, Kadam has done his Master’s in Business Administration and is honing his skills in art.

His guru Maulik Shah said that he embodies the grace and masculinity in Kathak and Ishira Parikh added that he has shown the courage to take up a classical form of dance as his profession over his family business. The first piece he performed was ‘Gangadhar’, an ode to Lord Shiva. Kadam began the piece by showing the jata of Lord Shiva with Ma Ganga trickling down those locks: ‘sheesh dharan gange’. He depicted the mountains where the lord resides, the damru in his hand. The bols that were used for the damru beats and his jumps to them were both powerful. The rhythm was very catchy. In the nritta interlude, he performed a tukda. Finally, he depicted the knotted jatas of Shiva, the Ganga flowing down from his head, his steed Nandi and Shiva riding on his Nandi. A very interesting feature of his style were the leaps and the bending of the knees during movements, which is not a regular feature in Kathak, usually performed as more of a linear dance form. In this piece, Kadam displayed his impressive balance between soft grace, precision and masculine vigour, and between technical prowess and skilful bhava.

For his technical nritta portion, titled ‘Aakaar’, he chose jhaptaal dus matra. Here, you could see the impressive and powerful professional solo Kathak dancer who has the capacity to cover the entire stage with his movements. He displayed great force and speed while his hands moved in controlled, graceful swirls. His footwork was very neat and technically sound, with jumps, leaps, squatting and even turning around in a squatting position. The phrase that came to mind was ‘rockstar of Kathak’. Had it been a live audience, you would have heard ‘wah’ from every corner. His confidence was infectious, leaps high and well-balanced, and chakkars performed with great pace and control. 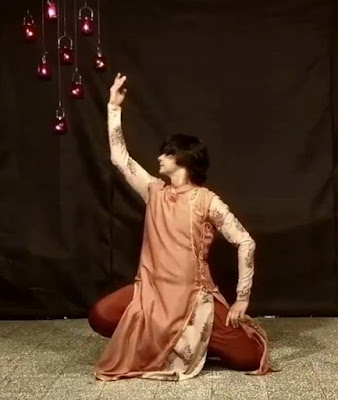 His first two pieces were fast-paced displays of technical skill, strength and his crowd-pleasing stage confidence, so his third piece was a surprise, a composition of his gurus which was a total contrast to the first two. For this bhava piece, he chose a poem by Ishira Parikh, danced by Maulik Shah, which was slow and sad, requiring him to subdue his technical proficiency and evoke viraha through his expressions. He depicted Krishna looking for Radha, waiting in the Nikunj. He is so consumed by anticipation that he mistakes the sound of a sprinting deer for that of Radha approaching. It was a very aesthetic depiction of Krishna as he waits for her, spreading out his pitambar, shaking the flowers of the trees and collecting them in it for her. He picks up a leaf and paints the image of Radha on it. This was depicted very subtly and the hand movements for the brush strokes showed that he is a painter. The sun rises, moves across the sky and sets, the moon rises and the night sets in, and yet Krishna is still waiting for her. He lights a lamp in anticipation that she will be there any minute. The flowers he had collected are wilting like his hopes. He is still waiting, with every sunset and moonrise and moonset and sunrise. The leaf that he had painted Radha’s image on is carried away by the wind. He gives away his bansuri and morpankhi. He is reminiscing about the time when they were both together, locked in an embrace, when Krishna would meet her at the panghat. They would proceed for a nauka vihar. As Krishna splashed water on her from the Yamuna, she would fake annoyance. Today, he sits alone, forlorn, on the banks of the Yamuna to which he has consigned his flute and morpankhi. 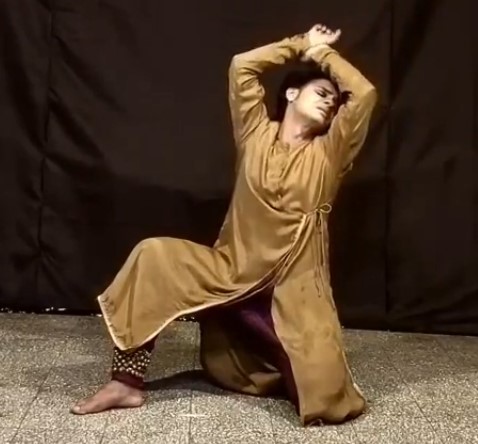 To end his performance, he presented the different types of bhramaris, along with ulte and seedhe chakkar. Lastly, he showed the function of a grinder – churning, mixing and grinding – while taking chakkars, raising his hands. Finally, he performed chakkars at great speed while moving around on the stage.

It is natural for gurus to praise their shishyas, but everything his gurus said was borne out in his outstanding recital. His multifaceted talent was evident in his combination of strength, speed and vigour with grace, precision and lyricality. His technical nritta had power, clarity and showmanship, while his bhava was sensitive, intelligent and mature. The mindfulness and attention to anga shuddhi his gurus mentioned was evident in the precision and consistency of his graceful movements, no matter how fast he was performing them. The action of painting in the bhava paksha was especially memorable. Hoping to see this powerhouse performer live on stage soon some day! 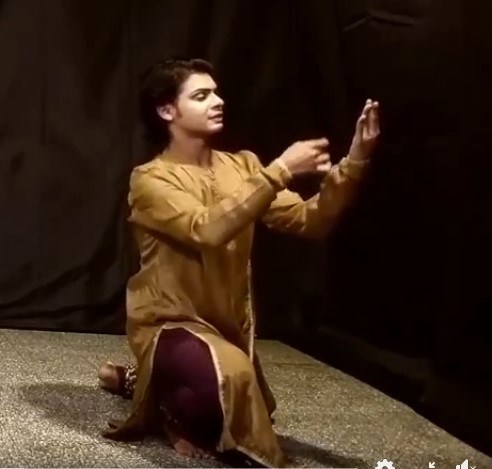 You can watch Kadam’s performance here: https://www.facebook.com/watch/live/?v=2783225695254713&ref=search. To contribute to Sankalp or to any particular featured performer, you can get in touch with Vidha Lal.