Rama Vaidyanathan’s masterful abhinaya animates many characters at once 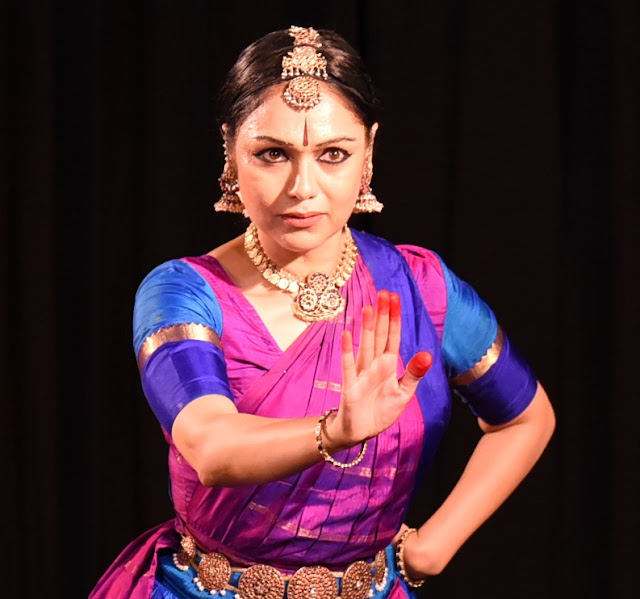 This performance left an indelible mark on the memory. As I watched, the stage and technicalities like lines and form disappeared – the abhinaya and the narrative were so strong that they transported me inside the piece. The performance was held for the Monsoon Festival by IIC Delhi. Rama Vaidyanathan presented abhinaya pieces for this event. 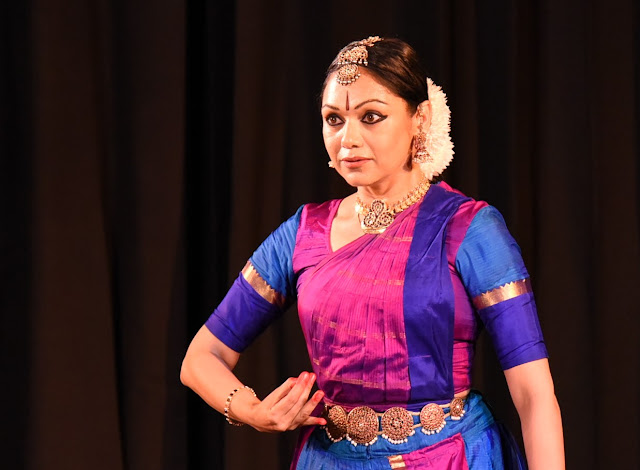 The first piece was to an abhanga by Janabai. Sant Janabai is a well-known Marathi religious poet who worked as domestic help in the household of another well-known Marathi religious poet, Namdev. In this abhanga, Janabai speaks to Panduranga as three different people – as her mother, as her fellow maidservant and then as her Supreme Lord. It is bhakti in three different perceptions. 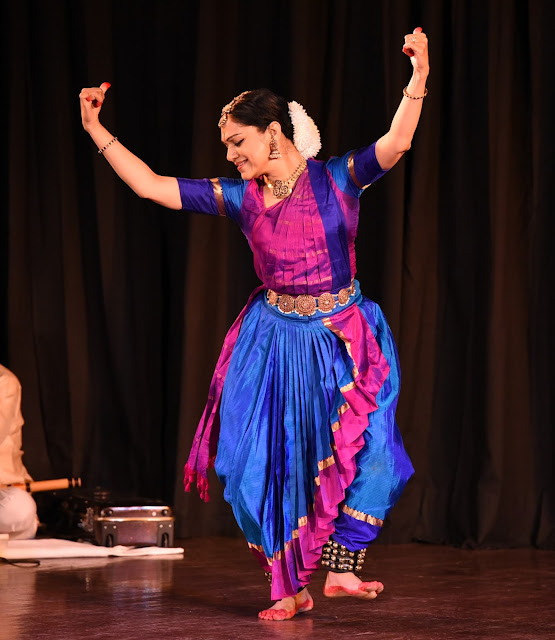 The vocals by Sudha were lilting and moving. Rama donned a blue and magenta aharyam, bringing brightness to the stage. Rama depicted both Janabai and the various ‘avatars’ of Panduranga she addressed. First, she portrayed a child and its mother, with the mother pacifying the crying child, feeding her, and then the antics of the child. 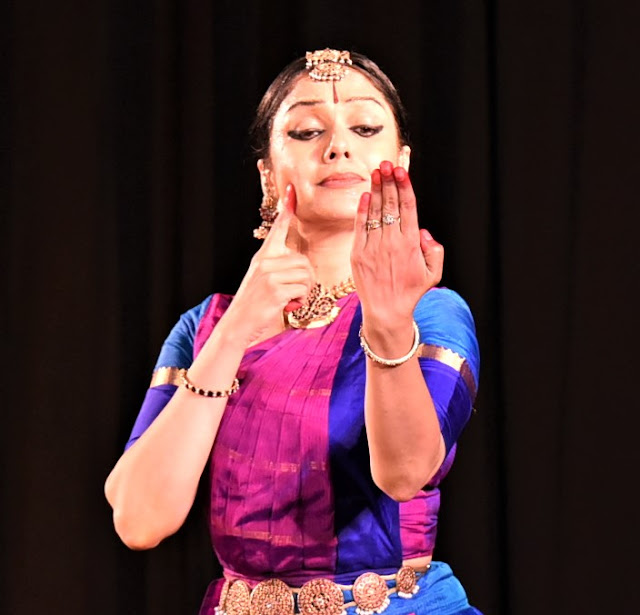 Second, she saw Panduranga as a fellow co-worker. She first berated her fellow maidservant, Panduranga, for some imagined slight, followed by a declaration of unswerving loyalty. Finally, Janabai sees him as her god, Panduranga, describing his beauty – kamala nayan, mukut, vanamala, peetambar – asking for mercy from dinanath. She says, you are my all – my mother, my friend, and my atmaram. Rama emotes very evocatively and her eyes are very expressive in her abhinaya. 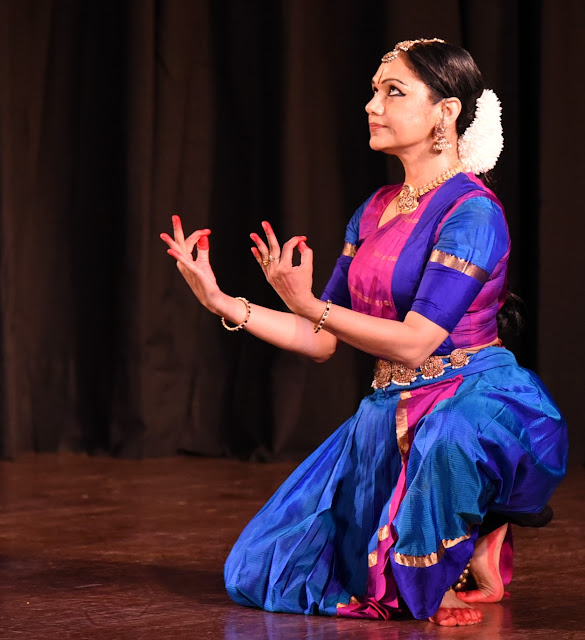 The second piece was a conversation between a sakhi and Alamelu Manga. Alamelu Manga is cross with Lord Venkatesh and her attitude irks the sakhi. The sakhi shows her exasperation at Alamelu Manga’s obduracy. In this padam, the sakhi persuades her to drop her pride and go to the lord. This is an Annamacharya padam in raag Chakravakam, mishrachapu talam. 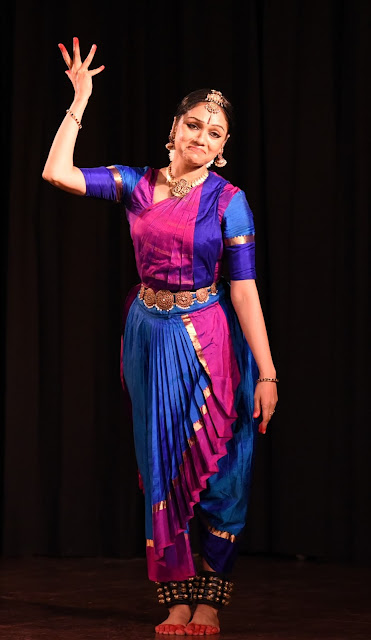 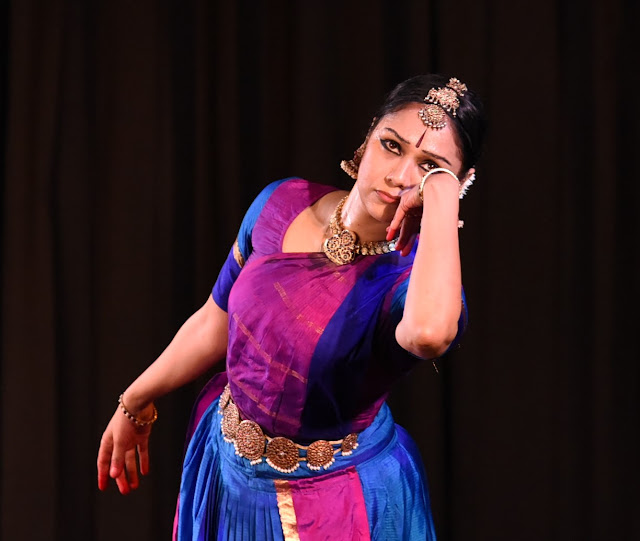 He gets lotuses for her, and she rejects them. He comes smiling, knocking at her door, but she turns away in disdain. As he comes in and shuts the door, she simply offers him water and walks off to sleep in her chambers. When he comes to kiss her, her cheeks are swollen with anger. He offers her a flower and she throws it away. The sakhi pleads with her to please walk towards him, accept the garland and take her position beside Lord Venkatesh. 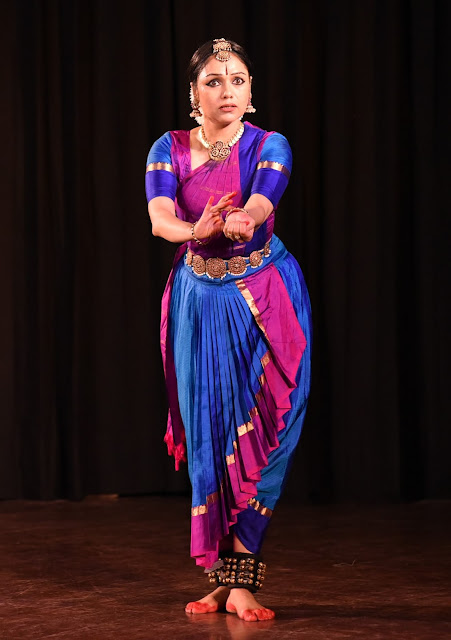 Here, we mostly see the sakhi cajoling, teasing and reprimanding Alamelu Manga. Rama’s expressions and eye movements were all very subtle but evocative, capturing the nuances of each character and sentiment, and bringing out the emotions of each one of them. 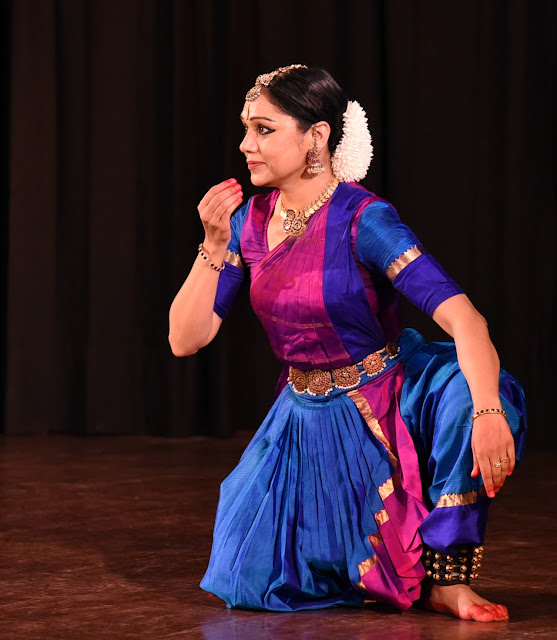 The third piece in aditalam was a Pattabiramayya composition. In this javali, the nayika is telling her sakhi, ‘Oh friend, how can I tolerate this behaviour? He is a great man but he walks into the house of that other woman. He is in a relationship with her. What use are these flowers, and my beauty?’ The nayika is distraught, waiting with flowers for him. She makes a gajra for her hair, which she wears to beautify herself. But when he does not appear, it gets all wilted and she pulls it off. She removes her other ornaments and sits despondently. 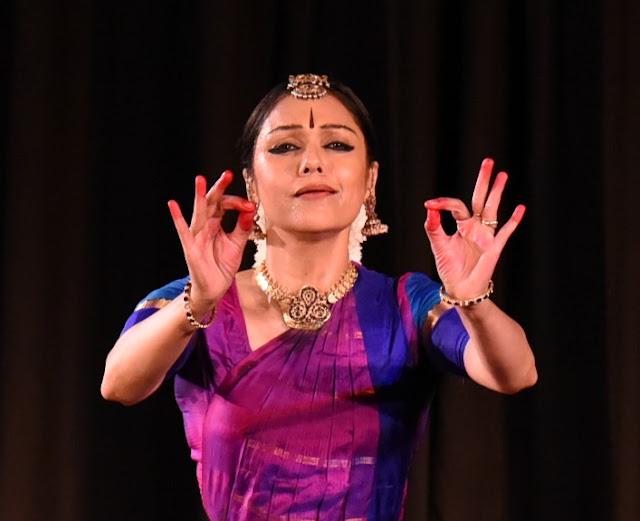 The fourth piece was a very special one. These were verses from the Kamban Ramayana. Ravana is on his way to defeat in his war with Rama. With one day to go, Rama has announced a break and told Ravana to go away, to come tomorrow. This episode becomes a moment of emotional upheaval for Ravana. He is totally devastated. 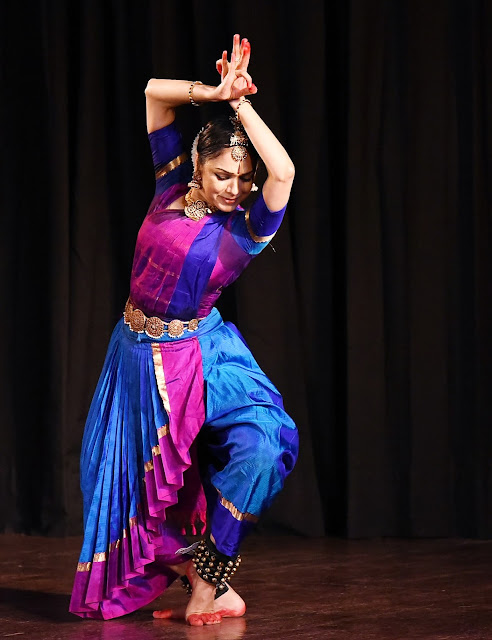 And on the last night that he lives, he walks into Sita’s chambers for the last time. Ravana laments, I am my own enemy. I thought I was consuming nectar or amrit, but actually, you have been poison to me. I feel consumed with both passion and hatred for you. I have become a slave and a victim to the circumstances that have made me a villain. What more will you do to destroy me? Today, my broad shoulders stoop before you. Nature conspires against me. The gods have turned their backs to me. I am my own enemy. The composition was in raag Mallika, mishrachaputalam, by Sudha Raghuraman. 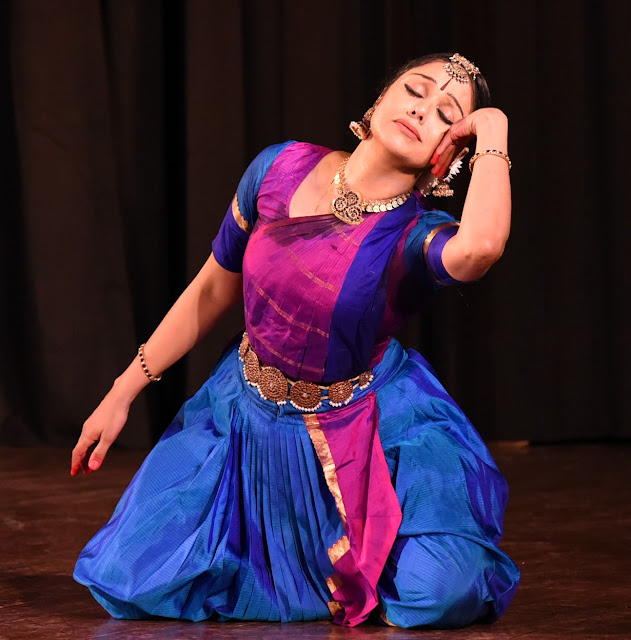 The flute created the mood for the piece. Rama started her depiction with Ravana walking with heavy steps to Sita’s chambers, pensive, his eyes lowered. As he sees Sita, he rues that she is the one who has divided him. That by pursuing her beauty, he has dug his own grave. She is the fire that has burnt him. 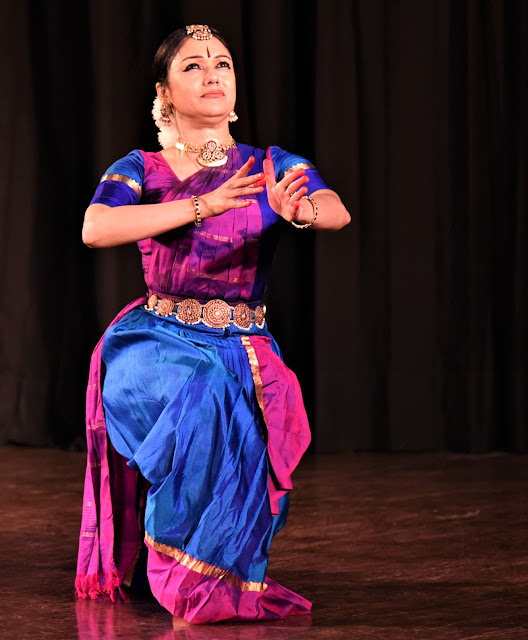 The fateful moment when he took her out from behind the Lakshman rekha and kidnapped her was the moment that his downfall started. He had brought her with him thinking that she would be his amrit, but she turned out to be his poison. All throughout this lamentation, Rama’s abhinaya brought out the personality of a defeated king aptly. 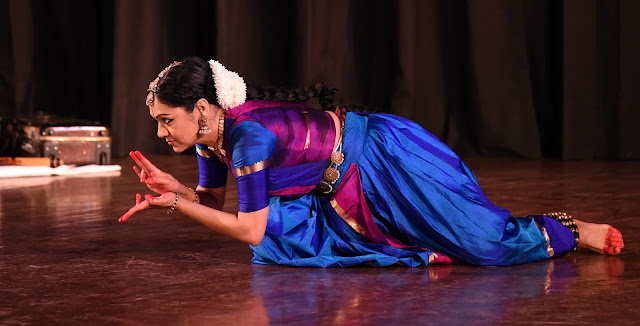 Ravana says that he had thought her to be a sweet-smelling flower but has been pricked by her thorns. He calls her the crocodile who’s going to pull him down and drown him while he has jumped into the river of his fate. The fleeting expressions of passion, fear, despondency and madness that crossed Rama’s face could move you to the core. 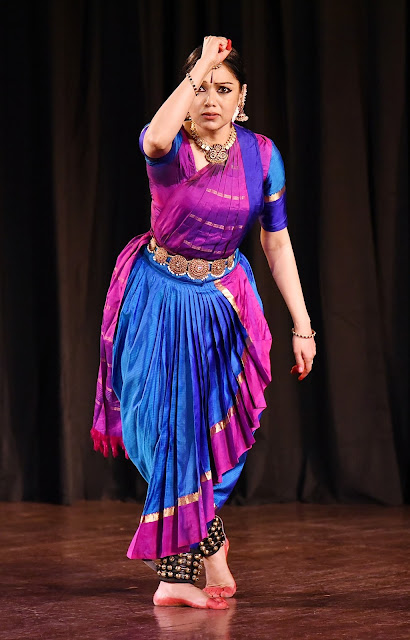 Finally, he bows at her feet, throws his ornaments and puts down his weapons in humiliation. If Ravana’s eyes were wet at this moment, so were Rama’s. Like a helpless person, he begs her to save him from Rama’s arrows. Aggrieved at the fate awaiting him the next day, he moves back again with heavy feet, a slow gait, a trembling voice laden with sorrow. If the dancer was emoting so successfully, it was the soulful singing of Sudha which expressed every emotion of Ravana. 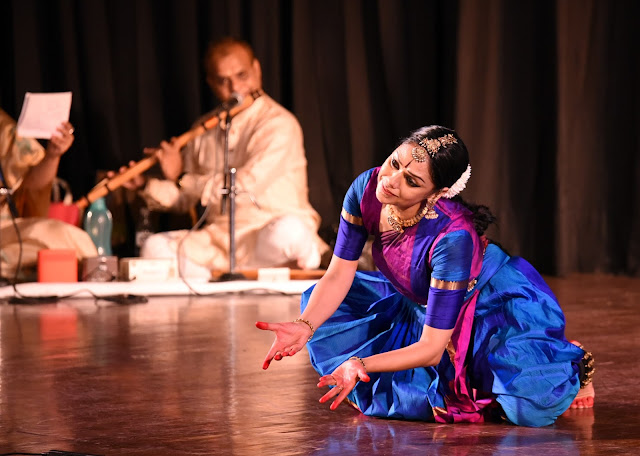 The Ramcharitmanas says, ‘Sita seet nisa sam aayi.’ Ravana experiences that dark period in his life where his glory diminished ever since he dared to abduct the jagatjanani and capture her. This has been one of the best pieces that I have seen Rama perform. It was neither the form nor the technique that was important – what stayed with you was the emotion. The composer’s interpretation, the dancer emoting, every little bhava that helped you get inside the skin of the character, and the vocals which brought out all the emotions so well. 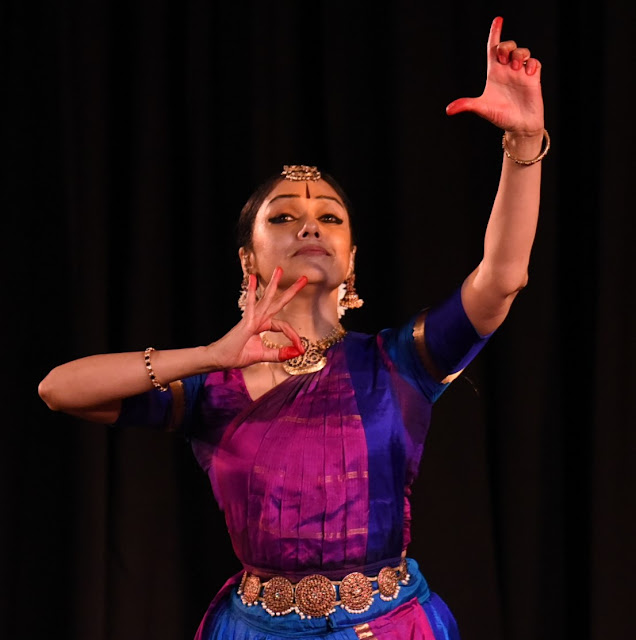 In fact, by the time the piece came to an end, I thought I already wanted to sympathize with Ravana for his miserable condition and despair. It is a victory of the dancer, an achievement if she can turn your thoughts away from the sensibilities that have been drilled into you and make you think like her. The entire team won huge applause for this piece. 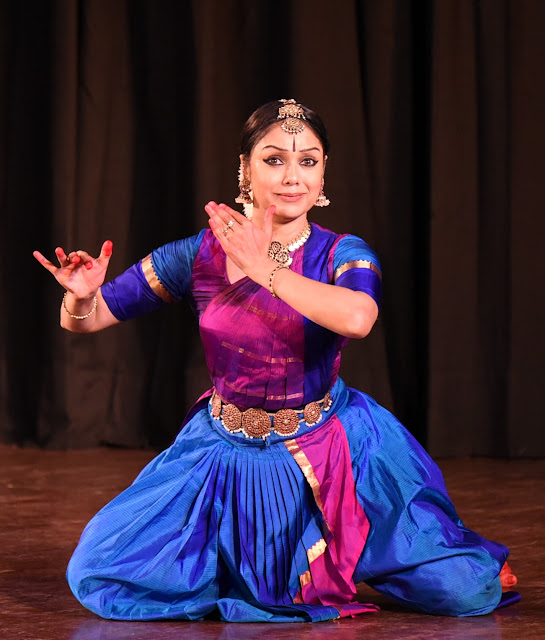 Next, Rama performed a Jayadev ashtapadi about Radha hiding in a bower and admiring Krishna’s beauty as he is involved in raas leela with the other gopis. Rama has performed this earlier as well, and I saw it during Samadrishti, where I have described it in detail - click here for the report.

The vocals and music composition were by Sudha Raghuraman, flute by G. Raghuraman and mridangam by M.V. Chandershekar.