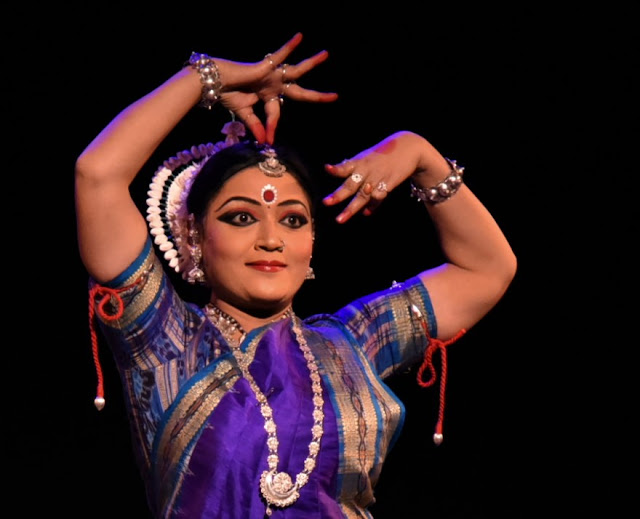 Earlier this year, Odissi dancer Kavita Dwibedi presented an Odissi recital at Meghdoot auditorium for the Sangeet Natak Akademi, in which she included a recent piece called Sati Brindavati. Kavita is the daughter and disciple of veteran Odissi maestro Guru Harekrishna Behera and is known for both her abhinaya and her technical skill. She has been practising Odissi for twenty years and is known for her solo and group choreographies. 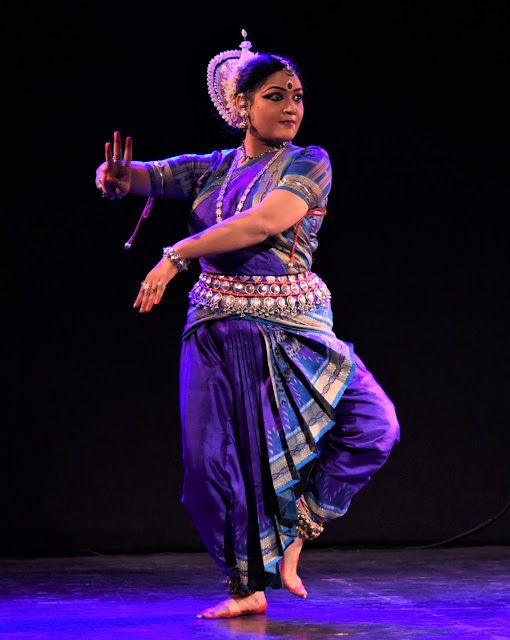 This was a very pleasing experience, with slow Odissi music and melody and a very graceful Kavita dancing to it. She began with a pushpanjali to lord Jagannath Swami. This was followed by the panchakshar stotram in praise of Lord Shiva. She depicted Shiva with the Ganga on his head, tilak and tripund on his forehead, the agni in his hand emerging from the sun, his scattered jata, the poison in his neelkantha, chandra on his forehead, trishul, pinakdharaaye. The nritta was very neat and precise, but also very graceful and lyrical. And the abhinaya, including the gestures and postures taken for Shiva, were very aesthetically done. Finally, to end the piece, she depicted the kundalini rising in the bhakta and the moment of epiphany when he sees Lord Shiva in the sahasrara chakra. 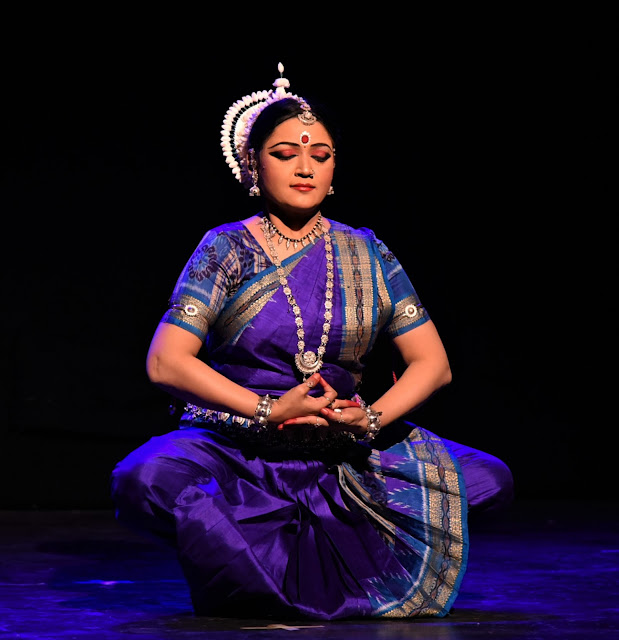 For the second piece, she did abhinaya to the Odiya song ‘Kali ki na aaye’. Beginning with the melodious notes of the flute played by Rajat Prasanna, the composition elaborated on a nayika waiting for Shyam. She is waiting for Krishna in her chamber, stringing flowers for her hair, with kohl in her eyes. She dresses herself and wears her ornaments. Kavita’s very sensitive abhinaya showed the nayika feeling dejected as she waits, and then she dozes off there. 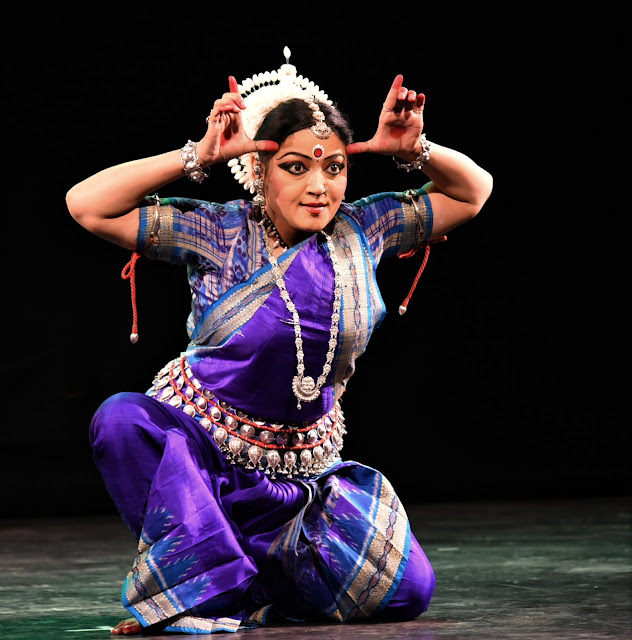 Finally, she hears the sound of Krishna’s anklets. She runs to the door and on seeing Krishna, is first pleased and then annoyed at his state. He has met another sakhi in the kunj the previous night. She shows him the mirror so that he too can see his dishevelled state. She then recounts the meeting with him for which she had to overcome many hurdles to reach him in the dark of the night, when all were asleep. She took off her anklets, put out the diya and left her house. There were snakes in her path, and her clothes kept getting stuck in the bushes. Kavita superbly depicted the untangling of the odhni. She rubs her hands in disappointment while He stands there, kajal on his lips and all the other tell-tale signs of a dalliance with another. She tells him not to speak a word and leave immediately. And then Kavita became the clever Krishna who knows how to appease Radha Rani: ‘Priye charusheele, tum mam praan bhushan.’ 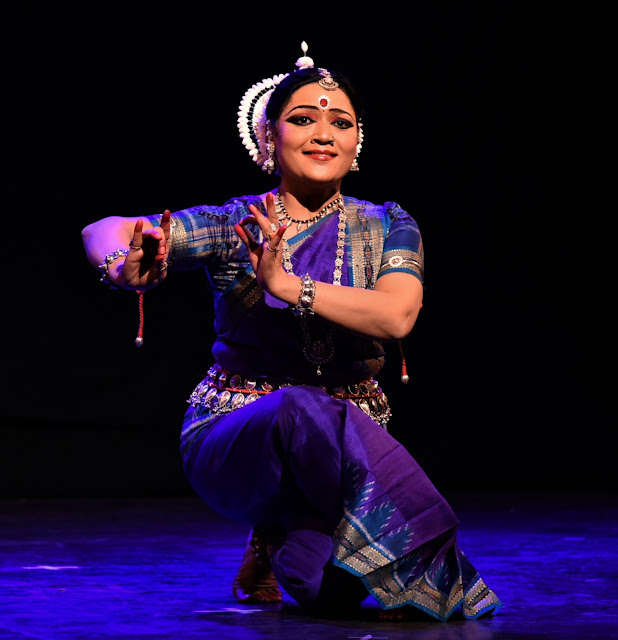 The piece was rendered with great proficiency. She ended with the Krishna Stuti, which was executed well, capturing every bhava and expression. This was a composition of Banamali Das. Kavita, a seasoned dancer, blended nritta and abhinaya to weave the narratives into a consummate recital, in which each emotion, each bhava was captured and expressed well. 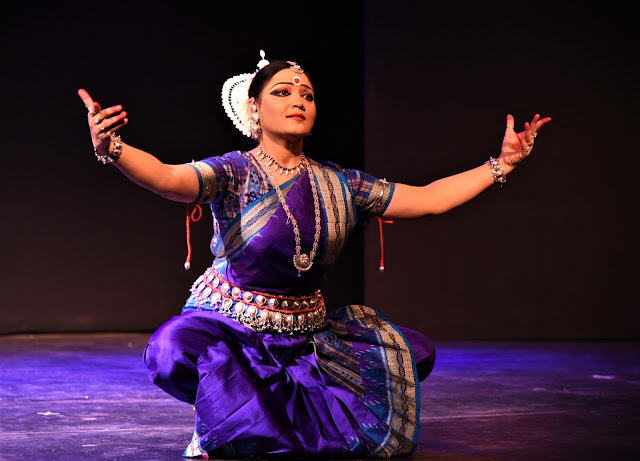 The next piece was the central piece, which revealed not only how Kavita has perfected her technique, but also that she emotes so well that the nritta and nritya together express the details of the story. The story she told was that of Tulsi or Brindavati, who was married to King Jalandhar, an asura. Jalandhar was on a rampage, waging war against all the kingdoms, since he was immortalized by the pativrata dharma of Brindavati. A tulsi plant was on the stage, ornamented as Brindavati. Kavita began her storytelling as a kathakar or a sutradhar with an ektara, singing the story. Here, in this storytelling, she acted various characters – Shiva, Krishna, Brindavati and Jalandhar. 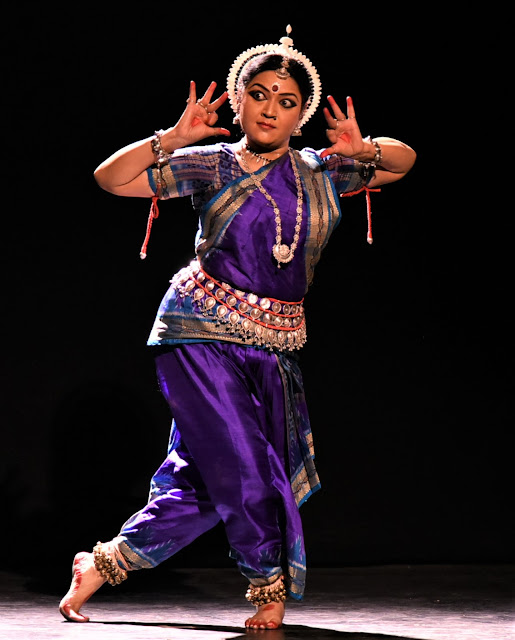 As Jalandhar, she walks in, one hand curling his moustache and the gait of a demon, announcing ‘naam mora Jalandhar’. The attitude and expressions were done well, with footwork and jumps in chauka and aggressive movements. Jalandhar had started eyeing Shiva’s Parvati and wanted to fight even Shiva for her. But Shiva knew of his immortality and went to Lord Krishna for help. Kavita as Shiva goes to pray to Vishnu, ‘Om namah narayane namah’, and begs him to destroy Jalandhar. Vishnu or Krishna sends Shiva to wage a war against Jalandhar. 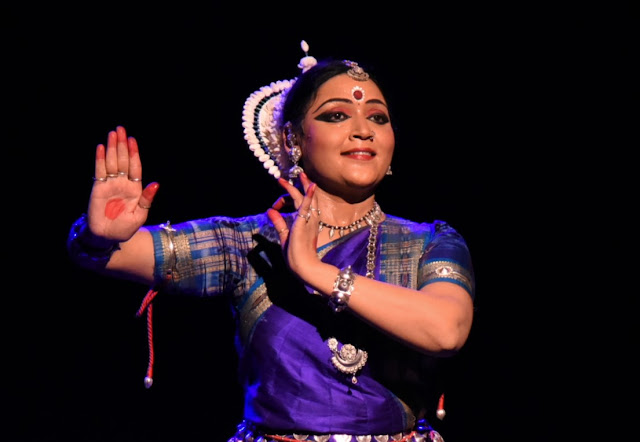 In the next act, Kavita as Krishna was a treat to watch. On the one hand, Brinda is collecting flowers. She weaves a gajra, wears it and ornaments herself. Vishnu comes in as Jalandhar and Brinda is taken aback when he expresses love for her, telling her that he has returned to be with her. The two lovers kiss and go to bed. This is when Brinda becomes restless in her sleep as she sees Vishnu beside her in the bed. ‘Kapata vesha,’ she cries out. 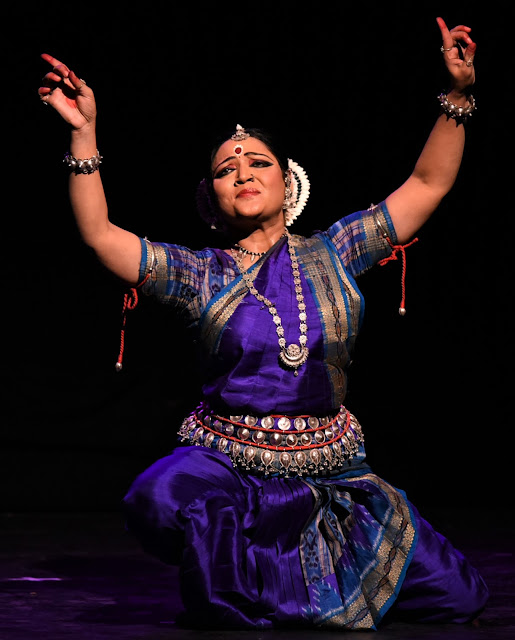 In the change of scene, as her satitva is broken, Jalandhar falls to Shiva’s weapons. Lord Krishna appears in front of Brinda in his chaturbhuj swaroop, with shankha chakra gada padma, and still she does not know what has happened. An agitated Brinda asks him, ‘ki payi tumi kapata kiye tumi.’ Her purity has  been tarnished. This is when she curses Krishna – she says that he will become a shila, the shaligram. She is furious and agonized, and immolates herself. Vishnu accepts her curse but gives her a boon in return – that she will become the tulsi, and that he will not have anything without the tulsipatra. He puts the tulsipatra on his head. 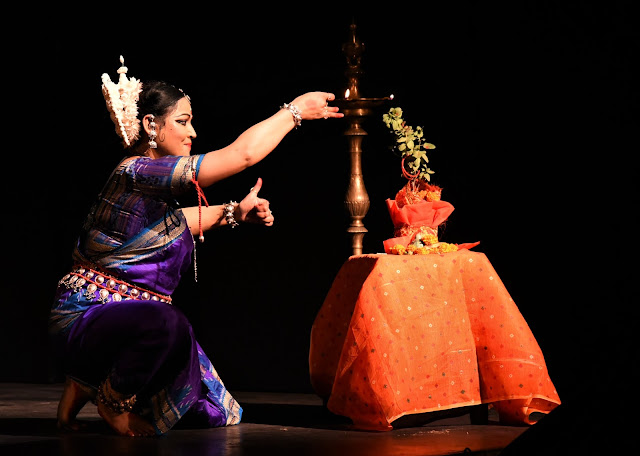 The culmination of this beautifully woven story was the puja that Kavita did on stage as the sutradhar of the tulsi plant, offering jal, chandan, tilak and aarti to the real plant on stage.

Kavita comes across as a very humble person, though she has achieved great proficiency in her technique. There is a lot of precision in her tribhanga, very exact hastas and very sharp footwork, which is very noticeable. But what really appeals to me is the sincerity in her abhinaya. Each character she portrays to the fullest, including the smallest details and nuances, and then relates these to the story. It is then that you feel like bowing to an artist of this calibre. 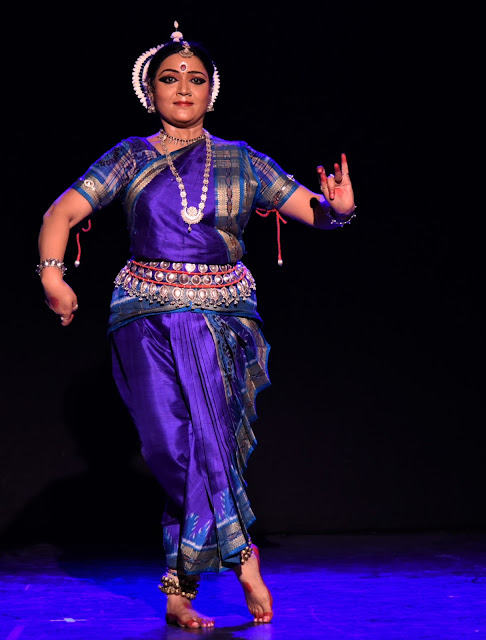 Later, she spoke to me about Tulsi Brindavati and some general aspects of her dance.

Q: How do you incorporate and choreograph nritta portions into your storytelling?

Kavita: In the Odissi repertoire, pallavi is the only nritta piece. When we do a thematic piece where storytelling and abhinaya are the main components, we do try to incorporate nritta portions as and when required. In the original composition, when Brindavati is waiting to meet Jalandhar, she adorns and beautifies herself. This we had as a pallavi or nritta segment. But because of the time constraints, we cut that portion and added a few musical notes, to which nritta was performed. In the beginning, it is just pure nritta, where she is beautifying herself, which added to the beauty of the overall dance. She is alone and adorns herself and is very happy. So it gave us the scope for nritta.

Nritta or pallavi can be in the form of a tarana, bols of na dir dina  or tat tari jhum. Here, I would like to mention a choreography we did on dashavatar. Each avatar was given a time of approximately 3-4 minutes. In the sukar avatar, he has to appease the dharti maa. We have used a bit of nritta or pallavi there, just to enhance the flavour of Odissi. The piece also demanded it – that mother earth is happy, there is peace, flowers are blossoming, trees are swaying, so we had a small section of nritta here which seemed appropriate. I put a small section with music swaras. It all depends on the dancer, the music director and the relevance of that portion at that point. After that, we sit together and experiment with the rhythm, music and choreography. And I strongly believe that if the theme demands it, all the segments of dance – pushpanjali, mangalacharan, pallavi, storytelling and abhinaya, bhakti and moksha, serenity – should all be incorporated in a thematic production.

That’s how I have woven the story of tulsi with all these segments. And I started with the sutradhar, bringing in the element of mangalacharan or invocation.

In Kathak, tarana is towards the end; in Bharatanatyam, the thillana is in the end; but in Odissi, the pallavi is in the beginning, so we put a bit of nritta section too in between to break the slow pace of abhinaya. There is another production we did about goddess Kalijai in chilika. In that production, it is not only nritta but also the postures that add to the beauty of the production. Nupur vadini, darpan, aalasya etc. are some of the nritta postures taken in the production. But the length, of course, varies from performance to performance, since we don’t always have the time to show them all.this production goes on to show how nritta and nritya are used to bring out the natya in dance.