The Madhavi festival, dedicated to Rama Vaidyanathan's mother Madhavi ji, was organized by the Kri Foundation and Rama in April this year and held at the India Habitat Centre. Dakshina Vaidyanathan Baghel and Vidya Subramaniam were the two featured dancers, and Dakshina performed an unforgettable piece on Shurpanakha. 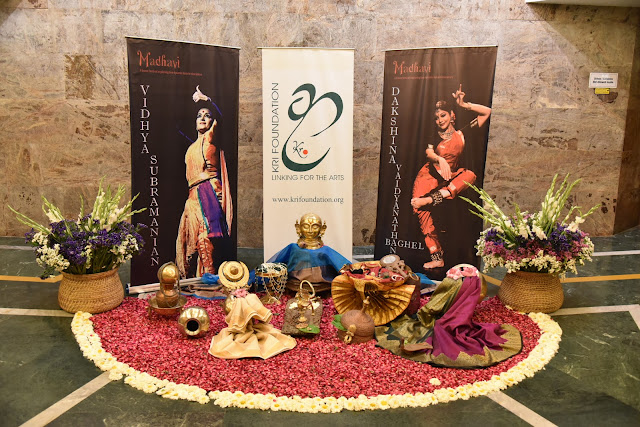 In the foyer outside the auditorium, there was an installation by Himanshu Shrivastava. The devi’s bust was placed on a blue saree with brass urns and ornaments, all of it on a flower rangoli. A paandan and a wooden box in the shape of a peacock, and sarees draped around an urn. 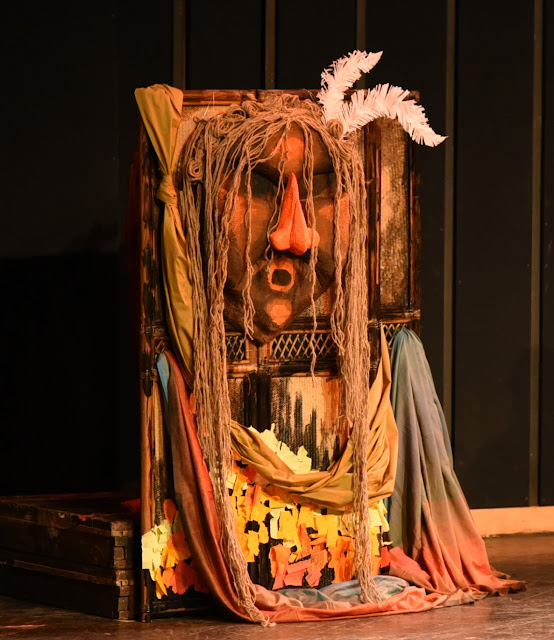 Inside, Madhavi Ji’s portrait was on the stage and in the other corner, there was an art installation by Himanshu which showed an ugly face with a large red nose and feathers in the hair. The nose was slashed and was the highlight of the installation. The hair was strands of ropes hanging down and then there was a cotton saree in dark, subdued colours draped around it. Beneath this were colourful tatters stuck on to the installation. 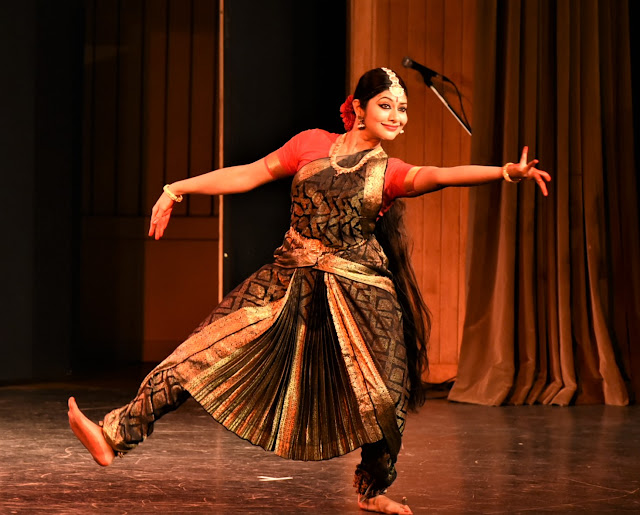 At the Madhavi festival this year, Dakshina presented Shurpanakha: the story only she nose. This performance has left a mark on my memory that can only be displaced when Dakshina herself presents something better. This performance I would like to report under my series of reports which highlight some aspect of dance. This was a performance in which Dakshina strung her skills in nritya, abhinaya and nritta into a thread to tell a story and bring out the natya aspect.

Dakshina’s costuming also stood out. It was a black saree and a red blouse, her long hair loose, tied with only a red gajra. Her big kohled eyes were complementing the costume. She looked every bit a beautiful woman with a hint of evil. 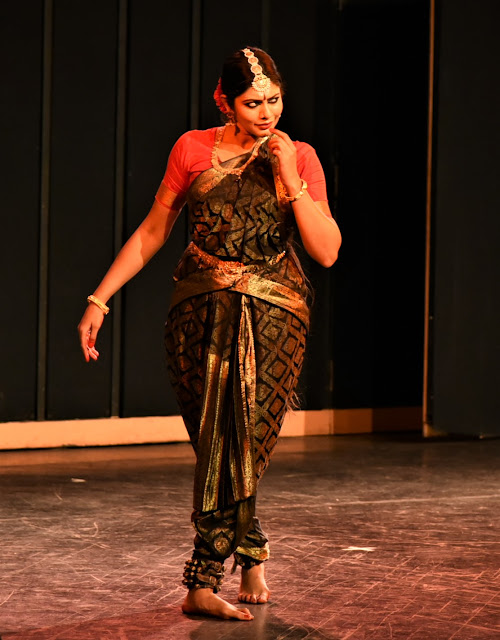 A summary of the story of Shurpanakha as told by Dakshina: she was the sister of Ravana but very beautiful, like her mother, and was called Meenakshi. Shurpanakha fell in love with Dushtabuddhi and married him, but her husband was killed by Ravana since Dushtabuddhi was a minister in Ravana’s court and was very intelligent. Ravana saw him as a threat and as competition, and killed him. She could not accept this fact and ran away from Lanka.

She roams the forests of India and this is where she sees Rama. As she sees Rama, she realises that he is the person who could kill Ravana and take her revenge. She knows Rama from Sita’s swayamvar, but Rama is a man of principle, of dharmagya, and he will not kill Ravana without reason. Hence, she contemplates on ways to incite him to kill Ravana.

In the first scene, we see the present of the story, where Shurpanakha is already a demoness. Dakshina as Shurpanakha makes an unforgettable entry, trampling on flowers, uprooting trees in the forest and moving around in her evil way. It is at this point that she sees Rama from far off and is taken aback by his looks – ‘purushaha mohana’. The very sight of him jolts her back into her memories as she feels the goosebumps and takes the padaraj of Rama and puts it on her head. The jatis and nritta that were taken here were very expansive, depicting the persona of Shurpanakha. 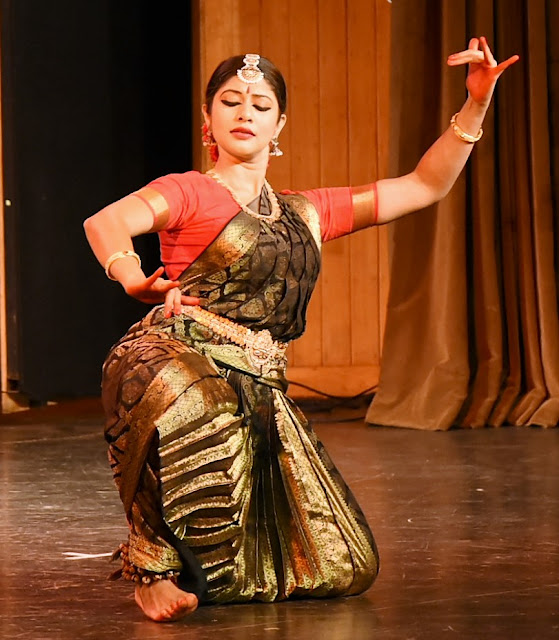 She reminisces about how she stayed in the Jambudweep and was a beautiful woman, Meenakshi, like her mother. She depicts putting tilak on all ten foreheads of her brother Ravana, which added a slight touch of humour. Dakshina showed the love and the vivaha between Shurpanakha and Dushtabuddhi. She takes a dip in the river and adorns herself with her shringar, wearing her ornaments, kajal in her eyes and kasturi in the parting in her hair. Her husband is not only good-looking but also learned or nipuna. She beckons him as he is busy working. She plays on the veena and is totally lost in the thoughts and love of her husband. Se enjoys the bliss of her married life as she wears her mangalsutra, and they kiss and make love. Dakshina shows the smugness that she has about her beauty as she looks in the mirror and finally, she and Dushtabuddhi enjoy time together on the swing. She is happy in her surroundings, the sukham that she gets with her husband. The intervening jatis and nritta again suited the mood of the situation. 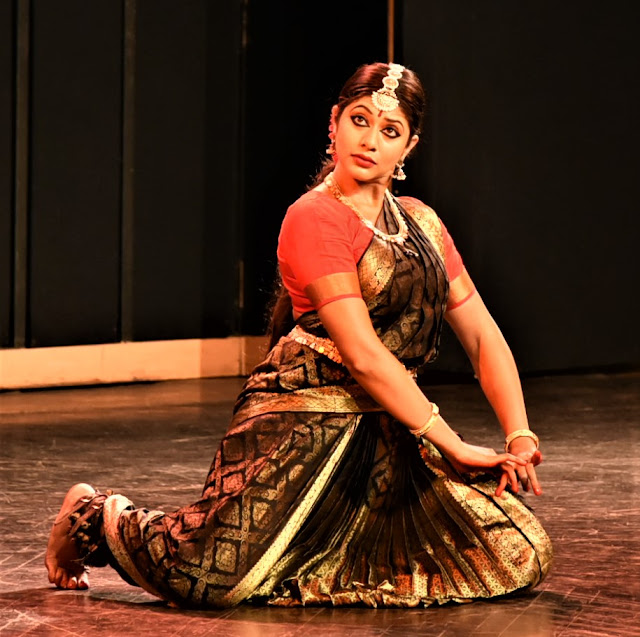 And then suddenly, things change for her as she finds out that her husband has been killed by Ravana due to his jealousy. The portrayal of her grief, her sorrow was very aptly done by Dakshina, pleading with her dead husband to look at her once, open his eyes for one last time. Very poignantly executed. 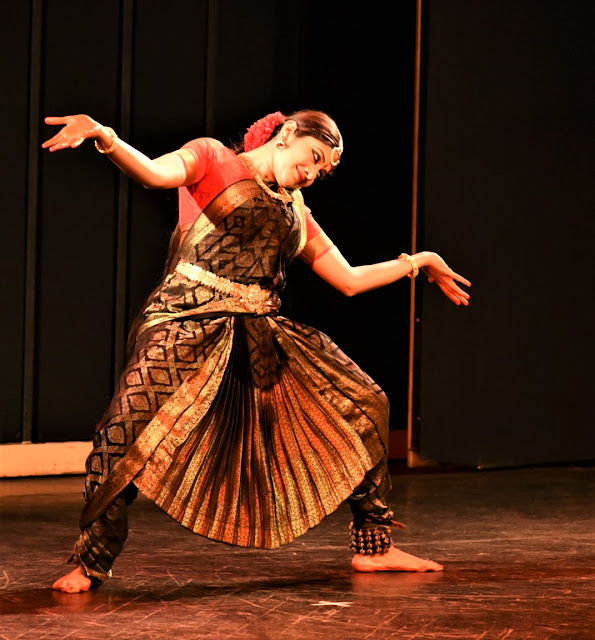 Then comes the transformation of that abject grief into red-hot fury and a desire for revenge. Dakshina’s transformation of body language and expression showed how deeply versatile she is at abhinaya. She went into a broad plie, swaying her head from side to side, the evil of a demoness descending on her and then her nails growing longer, eyes becoming wider. She throws her ornaments around and becomes what she is in the present, as Shurpanakha. It was just chance that Dakshina’s bangle had come loose and was falling and at this moment, she kicked it away in order to enhance the scene. The music, which was so aptly composed, added to the moment. Pratishodh is her motto now. 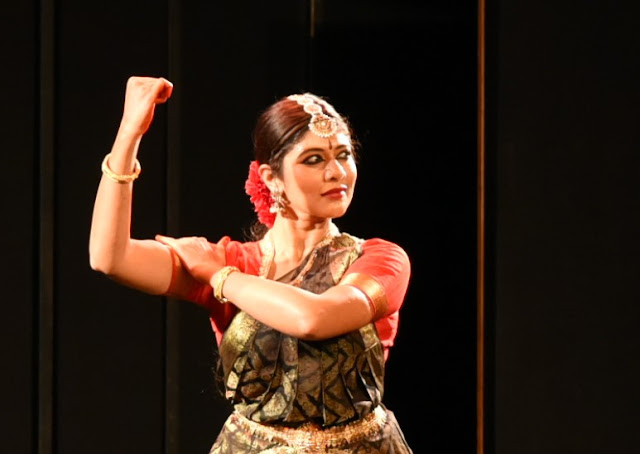 Here, she remembers the boon that Shiva has granted to her brother. She then loses herself in thoughts of taking revenge on her brother. As Dakshina has narrated, Shurpanakha’s first strategy is to go and confess her love to Rama and then, as he tries to harm her, show Ravana her mutilated body and ask for vengeance, since Ravana would never take the humiliation meted out to his sister. Here, you suddenly see the transformation of Dakshina from a demoness to a beautiful maiden holding her ghoonghat, her mannerisms, gait, all totally feminine. And then she thinks further, changing the mood back to Shurpanakha, who is walking around with aplomb and planning. 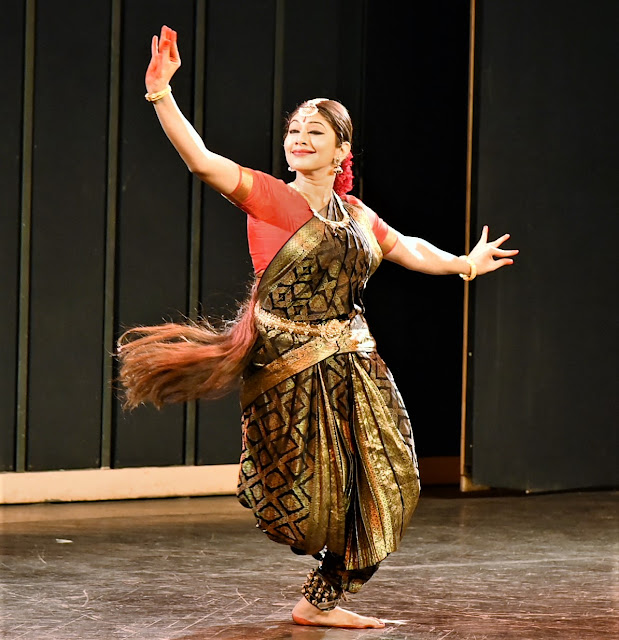 The plan now is to express her love to Rama and tell him that Sita is not good enough for him. I am the better one, she says, and then he would definitely hurt her as she coyly asks for love, he would even shoot arrows, and then she would lament in front of Ravana. The jatis in this piece showed a lot of attitude and a smirk on her face. 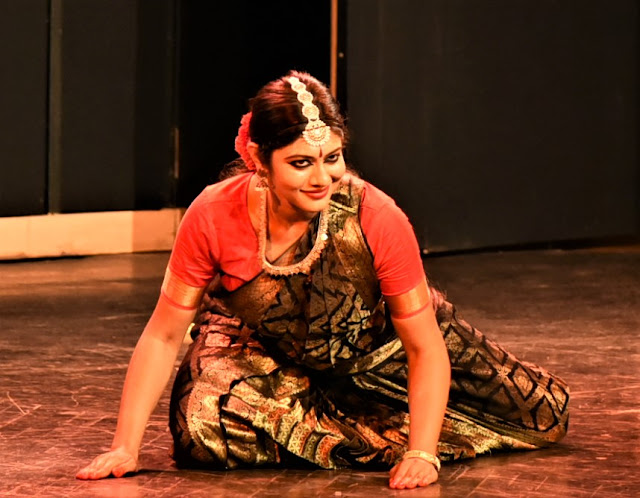 Finally, it strikes her that Ravana’s weak spot is women. She would extol the beauty of Sita to him, giving him two reasons for a war. She, in her heart, asks for Rama’s forgiveness for this act of hers, but she knows in her heart that Rama will win. The fire on the pyre of her husband becomes the fire of revenge inside her. And here, once her plan is finalised, she walks towards Rama. As Dakshina said, Rama was always on the opposite side of the stage and that’s where she walked from the stage, breaking the fourth wall, walking into the light that followed her off the stage. 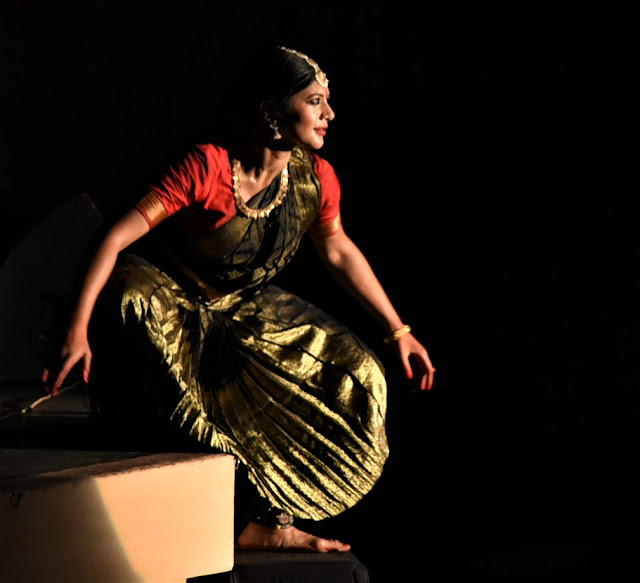 Concept and choreography were by Dakshina, lyrics by Divyananda Jha and Dr. S. Vasudevan, music by Dr. Vasudevan, nattuvangam by Rama ji, vocals by K. Venkateshwaran, mridangam by Arun Kumar, violin by Viju Sivanand and flute by Rajat Prasanna. This was originally choreographed by Patra Parichay festival curated by Usha R.K. in 2014.

The story was interesting, well-researched, less visited, the music and the vocals complemented the story and the choreography was such that you could see how proficient this dancer is. After the performance, I met a very proud guru and grandmother, Saroja Vaidyanathan, who said with a twinkle in her eyes that ‘this child has always been special to her’. 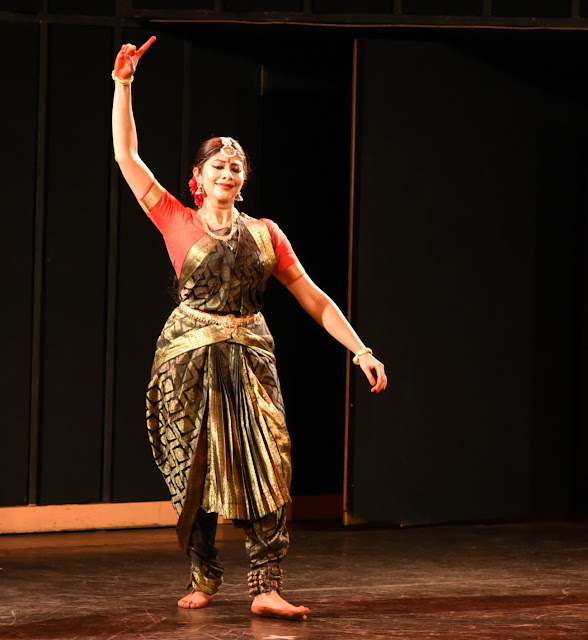 Excerpts from a chat with Dakshina about the piece:

What was the process of choreographing this piece? The nritta portions matched the mood and the expressions were either of contemplating or anticipating revenge.
A: I pictured the entire thing and brought it together. She is contemplating all the time, and the nritta portions were brought in to break the monotony of that abhinaya, adding a little more energy and spunk. Since she is a powerful character, the nritta helped me convey that power. I did try to keep the nritta within the stature of the character, and each interlude of nritta was followed by coming back to the character. The expressions and moods were whatever was required at that moment. For the expressions, I needed that clarity of thought. What the mood for each portion was going to be and what emotions it required. I stood in front of the mirror and came upon certain expressions, went back to my gurus several times for their feedback, and then changed things according to what they said. That is how the process went.


About the music…
A: I got the lyrics in English, got them translated to Sanskrit and got the music done later (with Dr. S. Vasudevan).

Do you ever go out of your idiom of Bharatnatyam for a choreography of this kind?
A: No, I don’t. When I present a traditional margam, the abhinaya is very subtle and sensitive. But when you do a characterisation, there  is a lot of dramatisation involved. The expressions have to be enhanced. Like in this production, Shurpanakha is a rakshasi. And the emotions that she portrays cannot be normal. She is a little crass and she is not someone who would have a behavioural code, so you have to delve into the character and decide how it has to be portrayed. It is one thing to do character dramatisation and another to perform traditional Bharatnatyam as far as the expressions are concerned. In dramatisation, you have to be a little louder with your movement and emotions.


What about the jatis? Do you have to walk out of your training?
A: Not really go out of my training, since everything is there in Bharatnatyam. But I might try a few elements here and there. Bharatnatyam is my comfort zone and the rest is all done according to the character – the movements have to be tweaked a little.