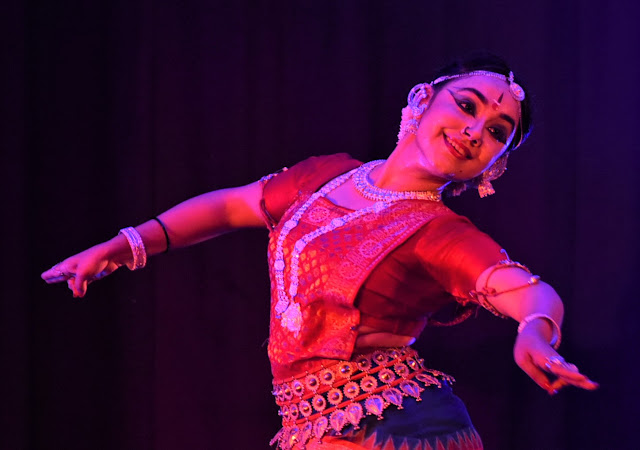 On 7th March, Guru Ranjana Gauhar and her troupe presented ‘Chitrangada’ at the IGNCA in Delhi. It was an enthralling experience to watch such an aesthetically complete performance.
Shri Rabindranath Tagore wrote the story of Chitrangada, inspired by this brave character. In 1892, he set the story into a dance drama. Princess Chitrangada gets a mention in the epic Mahabharata as a warrior princess of Manipur in love with Arjuna.

The story says that brave Arjuna, during his period of exile, went to the hills to meditate. That is how he came to be in Chitrangada’s kingdom. She saw him on one of her hunting trips and fell in love with him. I missed a small part of this act. 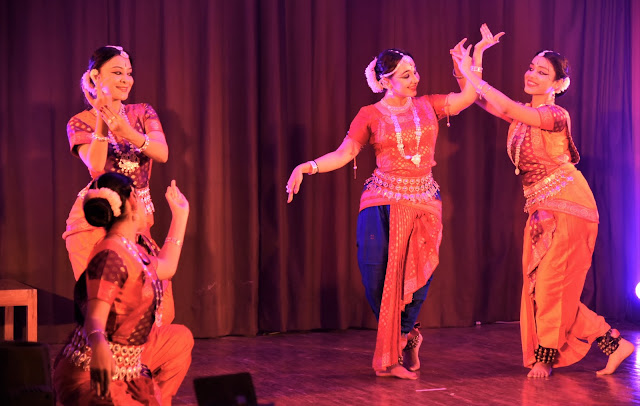 Ranjana ji’s young and talented disciple Vrinda Chaddha essayed the role of Chitrangada. She looked stunning in her red turban and blue costume. In the next act, the princess comes to the river with her sakhis for bathing; they play and frolic in the water. The group of dancers recreated the scene in the river and the waves with the sound of water in the background. This was followed by the depiction of the princess dressing up in ornaments. Arjuna is sitting nearby in tapasya, chanting ‘Om’. Vinod Kevin Bachan, another talented disciple, danced as Arjuna. 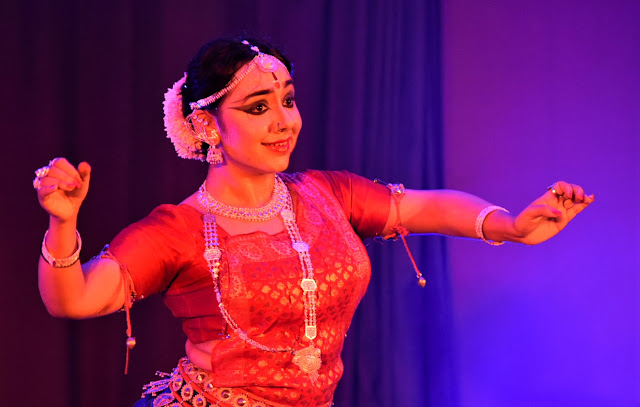 Vrinda as the princess looked beautiful. She sways with the dexterity of a seasoned dancer. The princess looks at nature around her – the lotuses with bees hovering over them, the deer frolicking – and she offers flowers to Arjuna, touching him. He gets up with a start; ‘brahmachari, vratadhari’ he calls himself – sworn to celibacy. He rudely rejects her advances. She is completely shattered by this rejection. Vrinda presented a moving portrayal this scene, looking totally broken, her pride shattered. The nayika questions her femininity, thinking that all these years, being a warrior, she has become more like a man rather than a woman. A very poignant depiction. 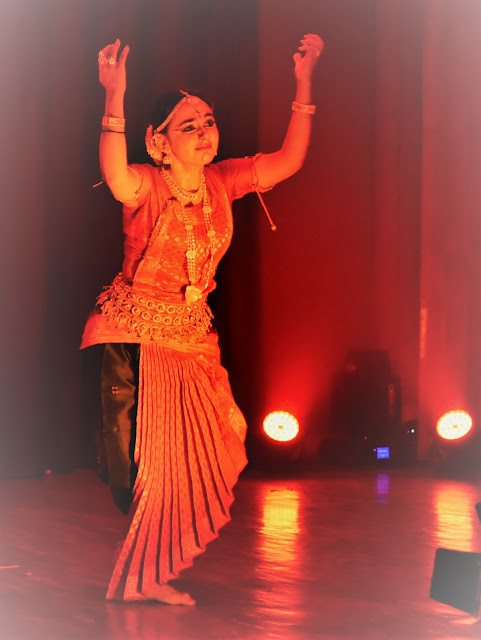 In the next act, Chitrangada is seen performing tapasya, praying to Lord Manmatha for beauty and feminine grace to win Arjuna’s heart. Manmatha (a dancer who walked on stage in a yellow costume and flowers) takes stances with the bow and arrow. He grants her the boon of beauty for one year. Sanchita appears as ‘Chitrangada 2’, as Ranjana ji described her. She looked very beautiful in a red costume with stunningly beautiful and expressive eyes. She introduced herself with the song ‘Baaje bansi’. Her fragrance is that of flowers. She adorns her home with toran and diyas which she places at the entrance, and her heart is full of hope for her beloved’s coming. 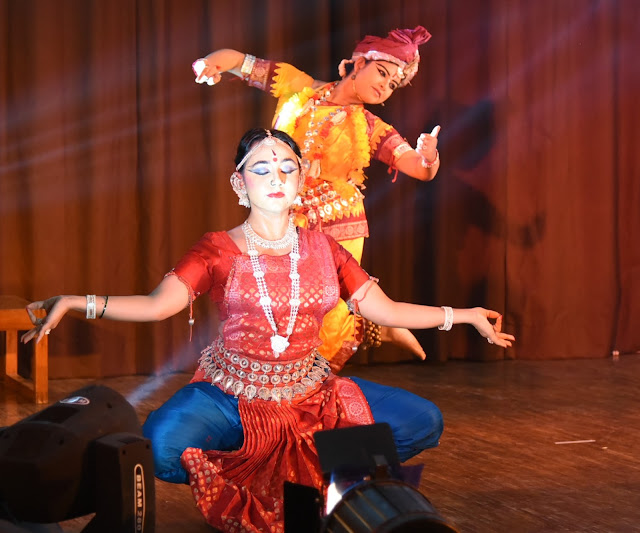 Arjuna, when he comes, is totally enamoured by her beauty, and Madana strikes. She extends her hospitality to him. He is taken in by her, wondering if it’s all a dream, and his vow of celibacy dissolves like dew on a petal. The two embrace – the dance of courtship by the two dancers was very aesthetically presented. 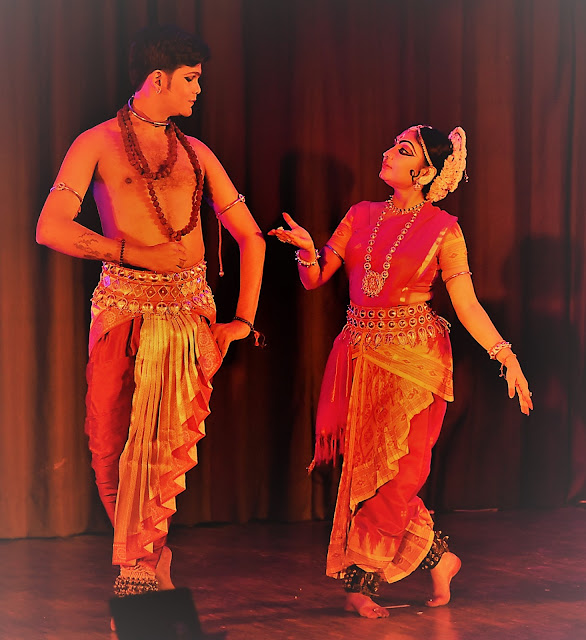 Vrinda in the background as the alter ego or conscience of Chitrangada is telling her other self that this is deceit and illusion, that this is not her true self. But her true body is her enemy while her present form and Arjuna express love for each other. They depicted the flower and the bee, taking stances to show their love through synchronized head and hand movements. Vrinda, again in the background, talks about the duplicity of this avatar, and warns that the cup will be snatched from her lips as the year draws to an end. Manmatha tells her to enjoy Arjuna’s love while it lasts.

A group of dancers, depicting sakhis, play around them with flowers as Arjuna and Chitrangada sit on one side, stringing flowers and romancing. The dancers here depict the birds and peacocks around them, but as the boon is coming to an end, Arjuna feels restless and tired. He expresses klanti. 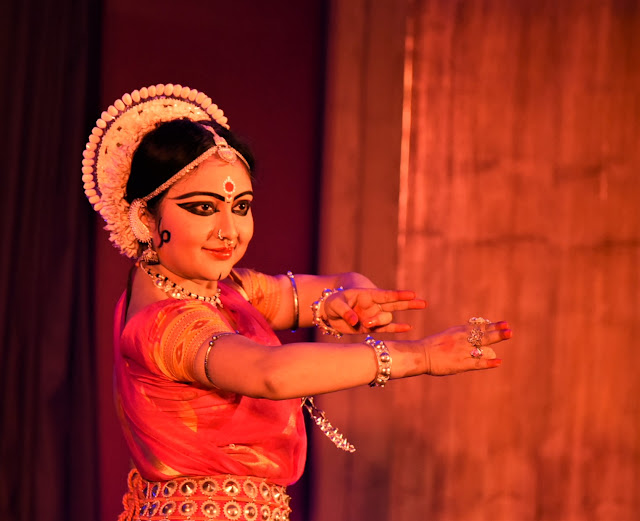 Here, the scene changes and dancers in Manipuri costumes depict villagers trying to defend themselves against the attacks of dacoits. They are dejected as Chitrangada, their protector, is on a supposed pilgrimage. Chitrangada cannot keep herself away any longer and, taking on her original form of a warrior, heads off to protect her kingdom. Again, the costuming of Chitrangada was very appropriate, with the head ornament or mukut a very fascinating piece. She repels the attack and saves her subjects. 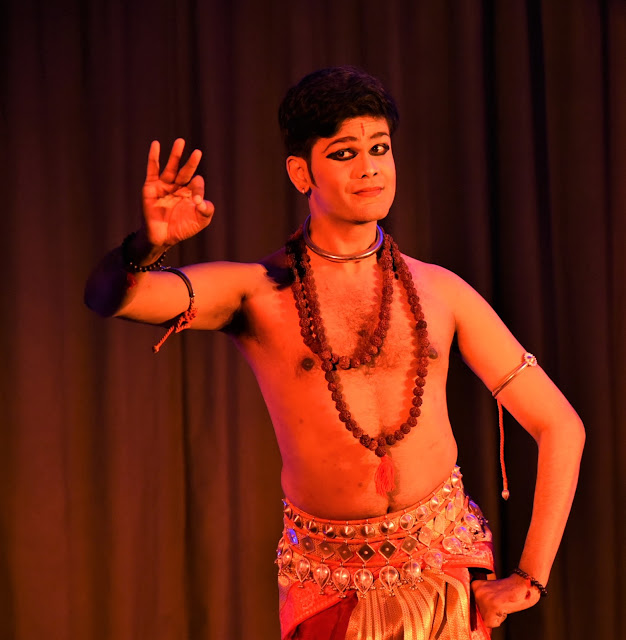 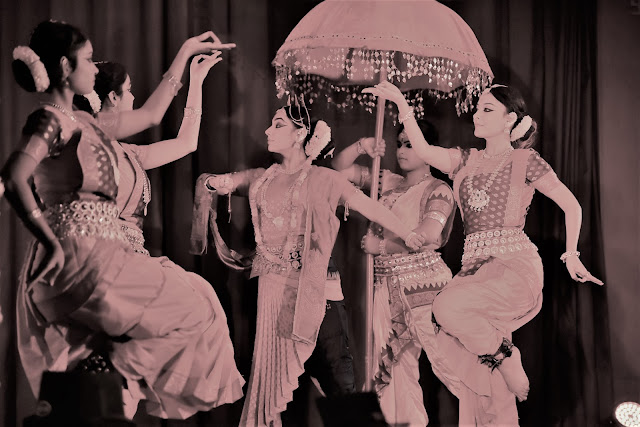 Arjuna, when he hears of this, is keen to meet her. Chitrangada 2, the alter ego, dissuades Arjuna from meeting Chitrangada 1, telling him that she is ugly. But when he sees the original, she tells him the truth – that she is not an ordinary woman. ‘Ami Rajendranandini,’ she says as she appears with a chhatra on her head. This was a very powerful act by Vrinda. Arjuna is totally in awe of her beauty and her courage. ‘Dhanya dhanya,’ he says and asks for her hand in marriage. The dancers shower them with flowers as they move together, Chitrangada in front and Arjuna behind. 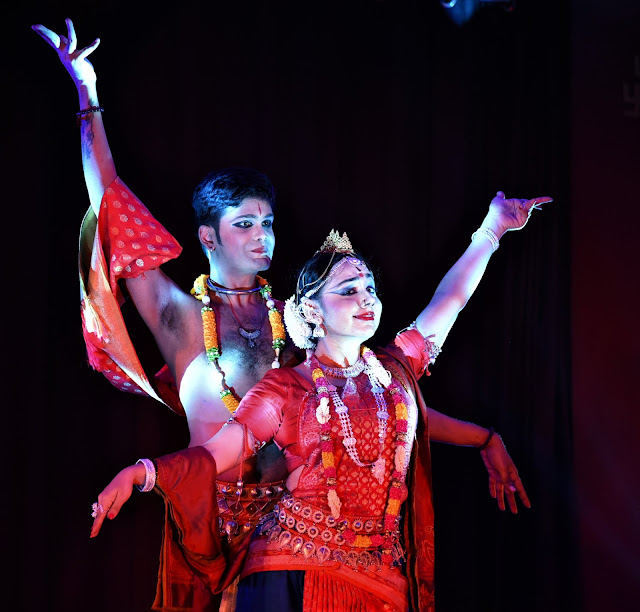 The performance was a very lyrical ballet rendered in a very poetic style. The story by Tagore is enticing and as always, centred on a woman as the lead. The music was very melodious and very aptly composed, getting into the soul of the story, the narrative and also the dance form. The choreography by Ranjana ji, as always, was consummate. Each one of her dancers has been groomed to bring out the nuances of the dance form and the character. The lights enhanced the story as it was narrated in layers. Finally, a special mention for the three lead dancers – Vrinda, Kevin and Sanchita. All three of them are very versatile and dexterous, doing full justice to their form and its technicalities.

Concept, script and direction were by Ranjana ji, music composition by Saroj Mohanty, the voices were of Avery Chaurey, Sangeeta Bahadur and Punendu, and the technical director was Sandeep Dutta.

Ranjana ji, who was a very proud guru after a successful presentation by her disciples, said that she was very happy to present this work on the eve of International Women’s Day. She said that in the dance-drama, Gurudev chose to call his characters Kuroopa and Suroopa, but she thinks that all women are beautiful and so chose to call her characters Chitrangada 1 and Chitrangada 2. About the choreography, she said that the first hurdle was the language, which was originally Bengali and had to be translated. Then it was the hurdle of music, which was Rabindra sangeet. 'It was difficult to dance to that, and I asked my music composer to increase the rhythm without tampering the melody so that it takes the beats of odissi. Bengalis everywhere were very pleased with the music since the original was retained. My effort to amalgamate the taalas in the melody worked magic with the pulse of the audience. We also added some Chhau movements keeping in mind the warrior princes and the martial aspect. Since Chhau is also from Odisha, we did not have to move too far away from our idiom.'


I asked her about the costuming, which was not only appropriate but also aesthetically done. Ranjana ji replied that it was all her design. The Manipuri pagdi had to be made on order, and the rest were all her designs.