Indian-American dancer Sonali Skandan presented a Bharatnatyam performance at Sandhya Raman’s Atelier on the 21st of December in Delhi. Sandhya’s cosy space at Atelier gives a feeling of intimacy to the performance. 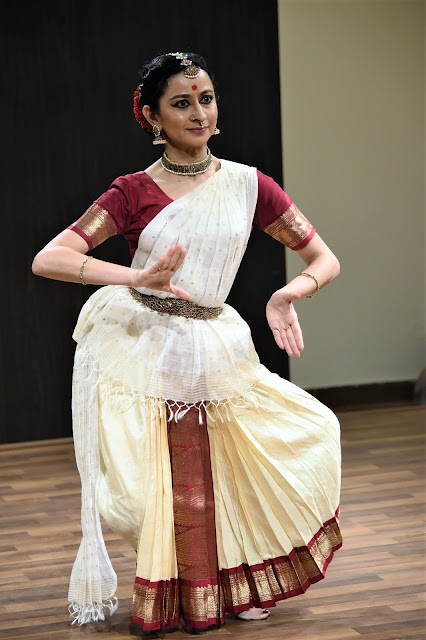 Sonali has been a student of C.V. Chandrasekhar and Bragha Bessell, and is receiving creative mentorship with Maya Kulkarni. She is the Artistic Director of Jiva Performing Arts in the US. 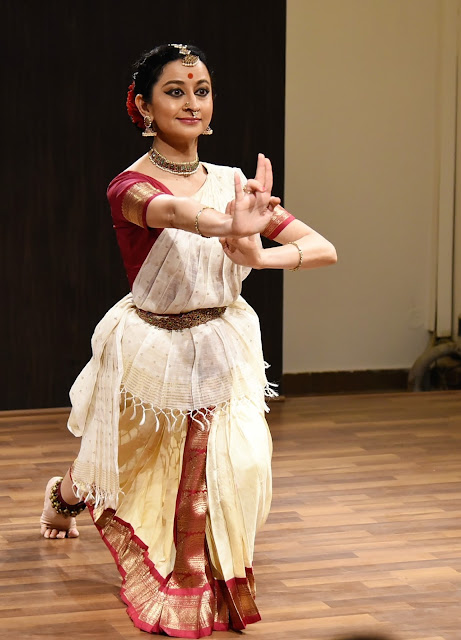 That evening, Sonali looked radiant in the well-lit space, wearing a white and red costume. The performance started with a virutham in praise of Goddess Meenakshi – ‘udaybhanu sahastrakoti sadrisha’. She started squatting, with one hand raised in the varad hasta. She depicted the radiance of a hundred suns being equivalent to the goddess’ brilliance, her bimbaphal lips and her yellow sari through stances and gestures with very expansive movements. She rendered the daaru varnam ‘Maate’, a composition by Harikeshanallur Bhagwatar. She is known as Matangi because she is the mother of the elephant-faced Ganesha. The piece had been choreographed by C.V. Chandrasekhar, with sancharis created by Sonali and Maya Kulkarni. 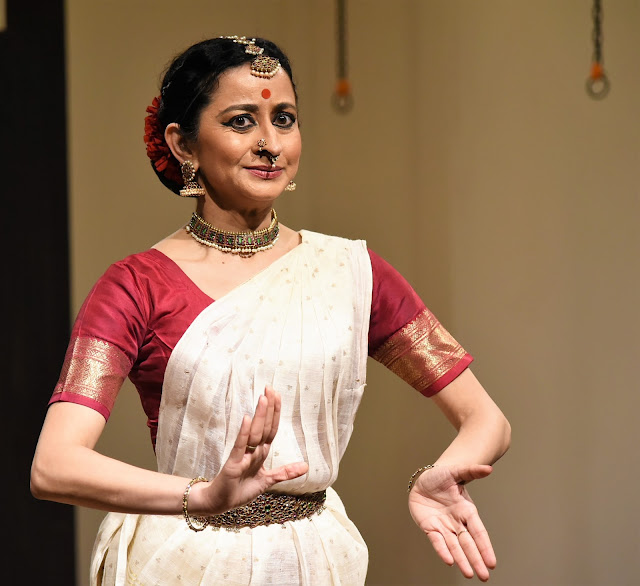 The birth of Meenkshi Amma was depicted in the pallavi. The king Malayathdwaja performed a yagya and from the agni was born a little girl. But she is three-breasted, and the king accepts it as the ill fate of the girl, who grows up to be a fine warrior. This was shown by Sonali through movements depicting chariot-riding and shooting arrows, followed by jatis which had expansive stretches and leaps. But when the goddess meets her soulmate Shiva, her third breast falls off and she assumes the form of goddess Meenakshi. Sonali expressively depicted the changes that occur within her as she sees Shiva. Finally, she took the stance of goddess Meenakshi with the parrot. 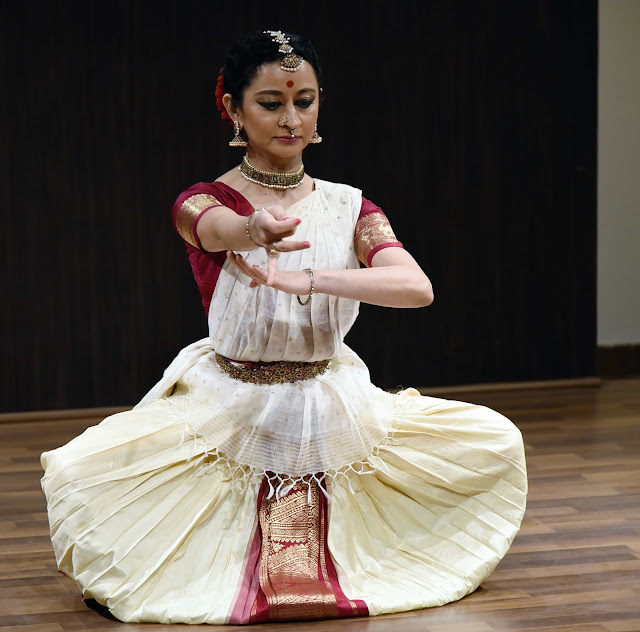 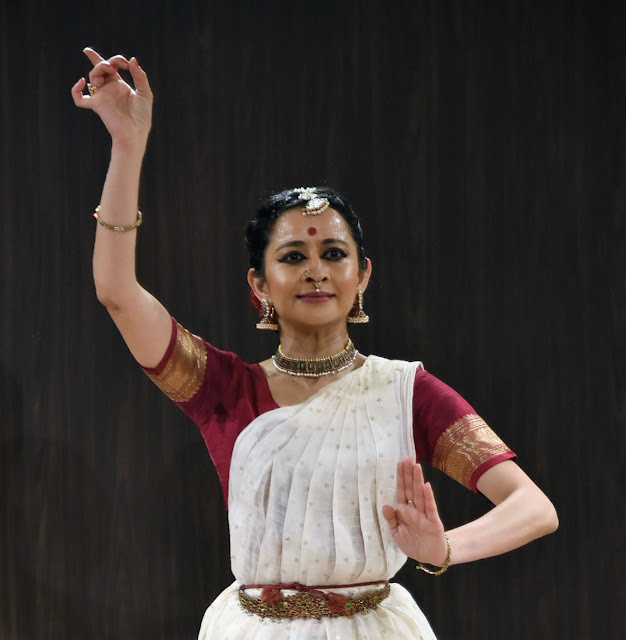 In the anupallavi, Sonali depicted the creation of goddess Durga, who becomes the supreme goddess. She is addressed as Gauri, Shankari, Chamundeshwari, Chandrakala. Mahishasura was difficult to defeat, and all the devatas merged their strengths and weapons to create Durga. Brahma gave his wisdom, Vishnu his chakra, Indra his vajra, Shiva his trishul, and so on. Each devata was shown to emerge with their respective energy and strength, that power bestowed on Durga, and Durga accepting it with grace. The chakra was shown through rotations of the hand, Shiva riding on Nandi and endowing her with his trishul had jatis with powerful movements of trishul. 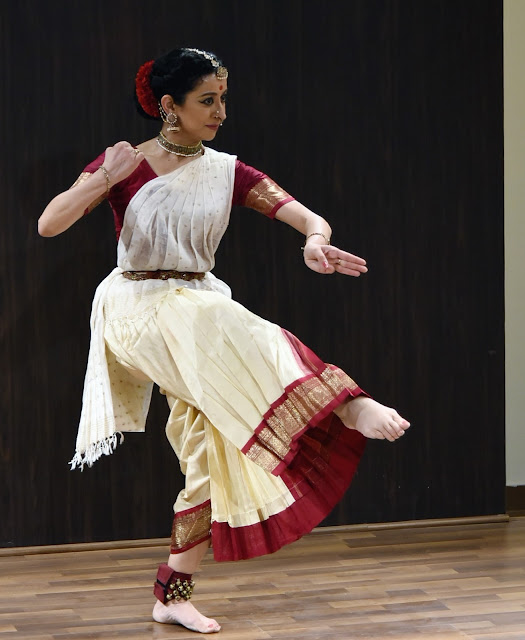 Finally, the fight between Durga and Mahishasura – Durga rides in to urgent, powerful beats, beheads the asura and drinks his blood. The act was done with a lot of energy and pace. Sonali came across as a dancer with a lot of technique, and her expressive eyes easily portrayed the emotional transition of Meenakshi amma on seeing Shiva. The making of Durga was elaborated with nritta and abhinaya. 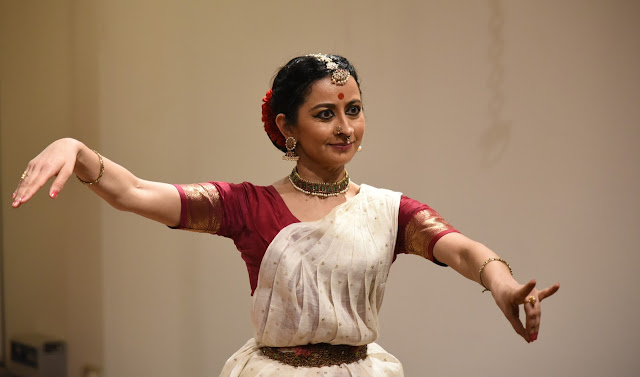 The next piece by Sonali was impressive due to its abhinaya and innovations. It was an excerpt called The Red Horse, from an original composition, The Four Horsemen. Sonali’s note explained that ‘The Four Horsemen is a unique Indian classical dance production based on the prophetic myth of the apocalypse. The work stresses the secular, and purely symbolic, nature of the horsemen and relates this symbolism to the cycle of human life, where suffering and hope are intrinsic to our lives. The work tells the story of four female protagonists who exemplify resilience, courage strength and hope. This excerpt, The Red Horse, or war, uses the metaphor of two lovers on the eve of battle, and juxtaposes war alongside love, showing the brutal effects of war on love.’ 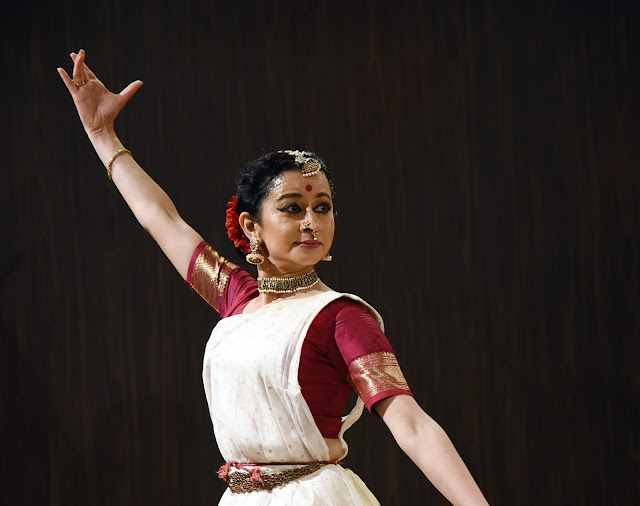 Sonali’s very emotive depiction showed a woman going through the pangs of separation from her husband, who is on the war front. She reminisces about the night before, when they were together. She thinks of the war and looks out, only to see the mayhem of chariots and horses. As a prelude, Sonali went around the stage trotting like a horse, occasionally stopping to paw at the ground with hooves, the way horses do. When asked if that movement was improvised, Sonali said, ‘Yes, that movement was created to represent the movement of a horse as he prepares to charge (in battle), and I haven’t seen it in classical repertoire.’ Her expressions in the war scene while shooting the arrows was quite apt. 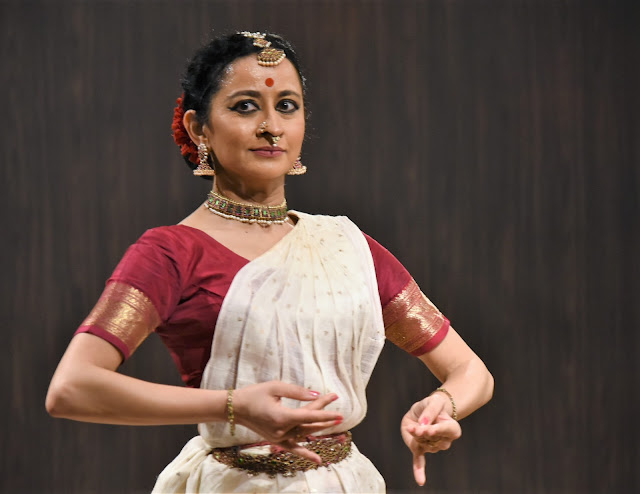 And then, amidst the sound of the flute, the scene changes to the lovelorn woman sitting in pain, trying to compose herself. She hears voices and runs to the door, expecting to see him back. She’s elated to see him alive. The hero walks in, and the depiction and rendering of the emotions of the hero were very touching. He walks in, caresses her, and pulls her into an embrace. The shy heroine pulls herself a little away. The soulful music was very appropriate. They make love and sleep. And as the morning breaks, the call for war is announced again. He prepares to leave as she gets her puja thali and applies the tilak. As a memento, he gives her his ring, which she wears on a thread around her neck. The entire scene with two characters and the varying expressions was emoted very well. In the morning, the nayika is awakened by the sound of violence, with war coming to her town again. She sees injured soldiers moving towards her house and in her anguish, she shuts the door. As a prayer, she touches the ring to her eyes. The piece ended with the sound of galloping horses.


This piece was a difficult one to explore in dance. The nritta interludes were very appropriate, but her expressions were the high point of her abhinaya. She has beautiful eyes which can express a lot. She left the story without an ending, leaving it to the audience to decide what the end would be – of the performance and of the war. 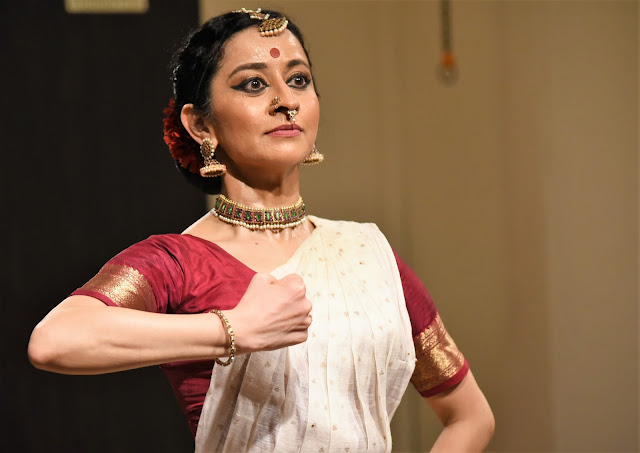 The costumes were by Sonali herself, and the concept and choreography were by her and Maya Kulkarni unless otherwise mentioned. The music was by Rajkumar Bharathi, with rhythmic jathis by Sonali’s husband Bala Skandan. Sound design was by Sai Shravanam of Resound India, script by Shiv Subramanian and Sonali, and dramaturgy by Kate Farrington. 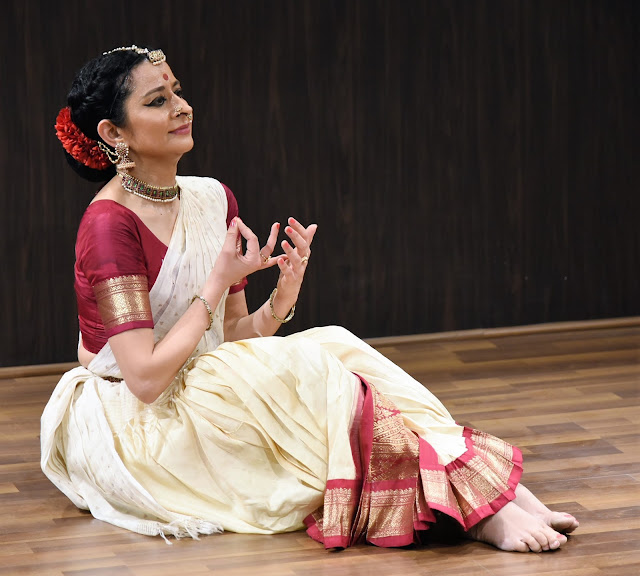 Later, talking over tea in an informal chat, Sonali said, ‘In the first piece, Goddess Meenakshi is going through confusion as her body changes. As she experiences this change in her body and looks at Shiva, her soulmate, she goes back to her divine self, which has a feminine aspect. That is what I have tried to show. For the second piece, the story conceptualization and the choreography were by my mentor Maya Kulkarni and me. It is not about any religion or country. The story is universal and what the heroine is going through, all the women whose men are at war go through. In the end, I left it to the audience to decide whether they want a happy end or a sad one. And actually, when the men come back alive from a war, how much of them is alive, that is the poignant question.’ 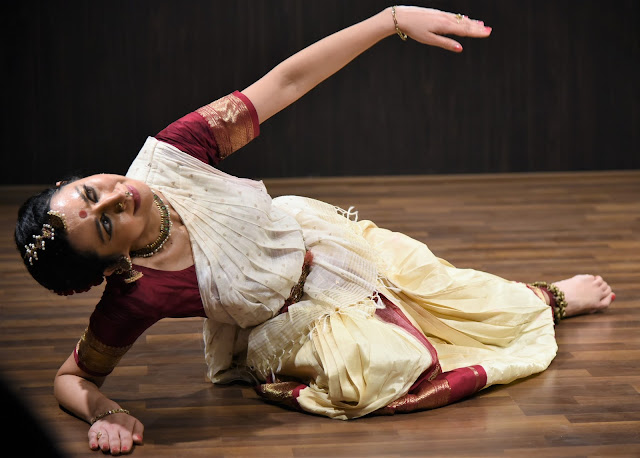