Building Blocks - The psychological process of getting into character starts while you put on your makeup, comb your hair, do your eyes: Streevesham dancer Abdul Khalid

I once watched a performance by Ajay Kumar and Sathyanarayana Raju. Here, Ajay Kumar was portraying Satyabhama in the Kuchipudi repertoire, and I can swear that if I had not known that he’s a man, I would have thought he was a tall woman. It was not only his costume, but his entire face makeup, his expressions, his dance that exuded femininity. So while talking of makeup for a dancer, I think it’s very important because it can transform the dancer totally.

Shringara is, hence, not only classical dance’s favourite rasa, it’s also a very real prelude to the dance performance. The process of donning the traditional dance costume, wearing the many pieces of distinctive jewellery, doing the hair and applying makeup is an integral and intimate ritual that transforms the performer into a nayak or nayika. I recently interviewed well-known makeup artist Brij Mohan Gupta on the nuances of doing makeup for classical dance, and he explained what the stylist/makeup artist focuses on.

But for a view from the inside, I also interviewed Abdul Khalid, a Kuchipudi and Bharatnatyam dancer in Delhi who does streevesham, and applies his own makeup for it. And hence, for the next in the Building Blocks series of interviews, this one is about how a dancer transforms with and during their shringara.

Abdul Khalid is a disciple of Gurus Raja, Radha and Kaushalya Reddy. His tutelage started with him learning Bharatnatyam under Guru Sonal Mansingh. Fascinated by Bhamakalapam, he decided to learn Kuchipudi as well. 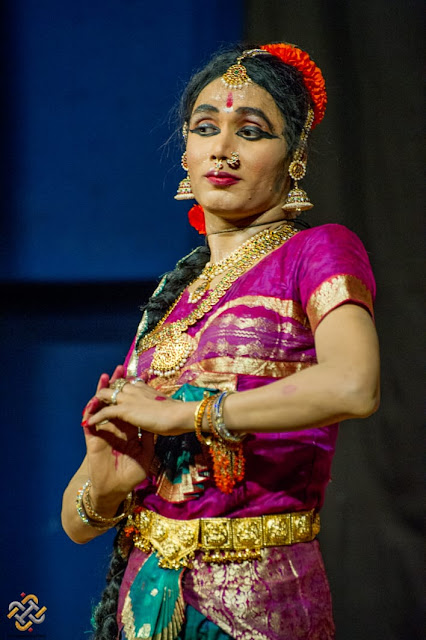 How did you start doing streevesham?

A: During my Bharatnatyam training, I saw a Kuchipudi performance of Bhamakalapam, and it fascinated me, plus, I always to play different characters. The character of Satyabhama suited my own personal nature too, and I thought I would be able to express it comfortably. I took up the challenge, researched streevesham, and saw some documentaries on great gurus like Vedantam Satyanarayana Sarma, the legend of streevesham, how he dressed up, what makeup was required, the training needed etc. After a lot of research, when I was ready to present it, I presented myself in streevesham, first in Delhi.
Kuchipudi developed as a dance-drama tradition. At the time, only Brahmin boys were allowed to learn Kuchipudi. Gurus used to take only slim boys with attractive faces so that they could also perform the female characters, as women were not allowed to dance in public spaces at the time, and there was also the difficulty of travelling with the team. And so young Brahmin boys would present various characters such as Satyabhama, Usha, Rukmini etc.
The story of Satyabhama attracted me to streevesham. Somehow, I could relate it to myself, the nature of Satyabhama, somehow I could understand her sensibilities, and also how I would present it. Also, Bhamakalapam is a beautiful dance drama with lots of romanticism, the anxiety of a woman, doubt, jealousy – Satyabhama is the character of a woman of a higher order. I have discussed this with many gurus, and Yamini (Krishnamurthy) guruji even said, a woman should be like Satyabhama. A woman should be proud of her beauty. That’s particularly what attracted me to streevesham – Satyabhama’s beauty, her love for Lord Krishna. She doesn’t want to share Krishna’s love, and I also think that any woman would be very possessive of her lover. I thought I could relate it to myself. 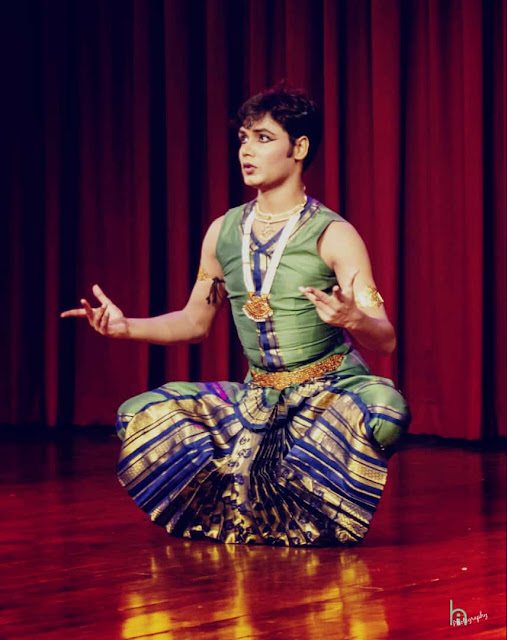 Besides the body language, and the emotional part of it, how do you get into character?

A: I think with any character, you have to go into the psychological part of it. You have to understand it, feel it deeply in you. If you’re presenting Krishna, then you have to feel Krishna. That is the motive of our classical dance style – you have to be that character. When I’m portraying Satyabhama, I have to be Satyabhama – I can’t be Abdul Khalid any more. When I’m Krishna, I have to feel like Krishna. When I’m Shiva, I have to be Shiva. I love to play different characters. This is also why I thought, why can I not do a female character? That was a challenge for me. I tried, did some makeup, checked whether it suited me or not, and I asked a few people, they said it’s coming out well, so I thought, why not try?

How do you go about the makeup in streevesham?

Which part of your face would you highlight most when portraying a woman?

A: I think the eyes are the most important to express any emotions, so for me, the eyes play the primary role. Kuchipudi has a lot of facial expressions, some overly exaggerated expressions, because it’s lokadharmi also, not just natyadharmi. We have to reach out to the audience. If we do not connect, there is no point. It was performed in the villages earlier, and the expressions were such that anybody could relate to them. But I thought that the expressions were overdone at times, so I mellowed the expressions to make them look natural.
We paint the eyes, lips, nose – your nose must be beautiful if you want to portray a beautiful character. 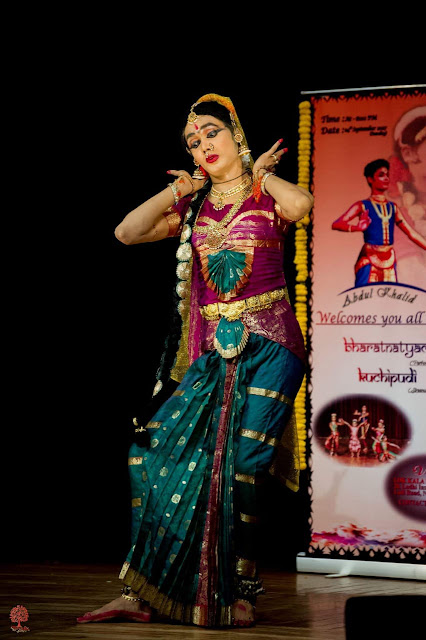 How do you do your makeup differently for streevesham and for a regular performance?

A: For streevesham, I have to use a lot of makeup, but otherwise, not as much. For a regular performance, I highlight only the eyes and use a touch of base makeup, eyebrows, teeka on forehead and a touch of lipstick. But for streevesham, I use the full base, plus eye shadow, eyeliner, we make up our eyebrows, the lipstick must be dark, and little bit of nose makeup also. On the hands and feet, we apply alta. We wax our body hair off and then apply makeup base on the hands and feet. The effect is brought out by nailpolish, rings and bangles and other stone jewellery, only temple jewellery. We wear ghunghroo and payal. For Bhamakalapam, you can wear a lot of jewellery since she is rich and fond of ornamentation. She was the daughter of King Satrajit, so everything has to be proper.

You have been talking of doing subdued makeup, rather than the pronounced traditional style of makeup.

A: Earlier, a lot of facilities were not there, like stitched costumes, but now we have stylized costumes. You should look attractive on stage. For a male dancer, it’s a big challenge, because as a male body, if you’re awkward on stage when portraying a beautiful character, it will look awkward. You have to feel that you are not Abdul Khalid or etc, you have to be that character. So whatever (trick of) imagination takes you to what Satyabhama would look like, I think I go with that – whatever makes Satyabhama looks beautiful. Like the women in old paintings. I’m fascinated by and am a great fan of Yamini Krishnamurthiji. Whatever she did, it was so beautiful, so perfect, I think I follow her makeup style, costume style, hairstyle, which is a little subdued from what it used to be traditionally. Traditionally, they used a lot of hair ornamentation, flowers, overdone makeup. I thought it should be appropriate, not too much, because we have to be relatable for the modern audience too. 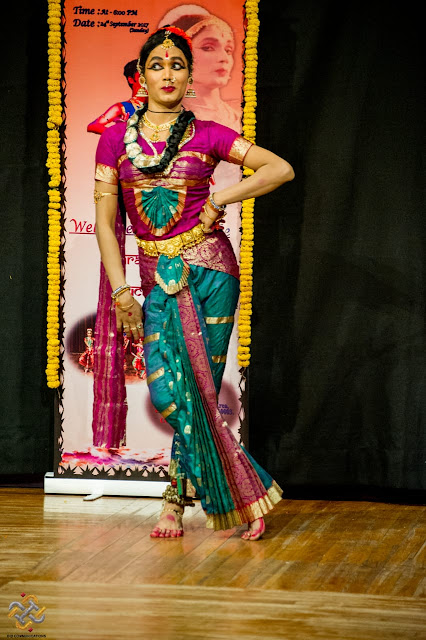 Do you take care of the other aspects of makeup, like waterproofing?

A: Yes, I use waterproof pancake etc. I do my face myself, and I instruct the hairstylists in how I want my hair done. Whatever the vision, you’re able to bring it out (when doing the makeup yourself) – and if you’re able to do makeup in the first place, of course. When portraying a female character, because the imagination is in your head, you know exactly what you want. So the best way to do the face makeup is to at least try to do it on your own. For the rest you need help, because you have to put on a wig.
While you are getting dressed, doing makeup, wearing jewellery, you have to start feeling that character in you, that woman, that beautiful girl. You have to feel it — our classical dance is all about feeling, observing. Unless you it comes from inside, you will not be able to portray it. You have to feel it psychologically in you. I have seen some documentaries – the psychological process starts while you do your makeup, you comb your hair, do your eyes. You have to feel that process. I have read that some young boys offered V Satyanarayana Sarma marriage when he was on stage! That’s why he was the legend of that art.