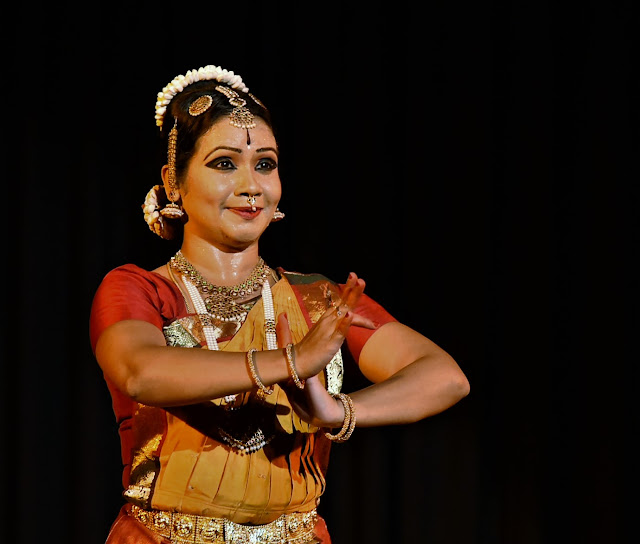 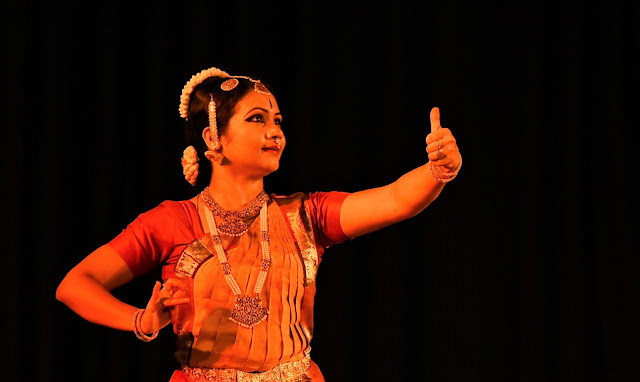 Geeta began her performance with an ode to the three devis – Goddess Saraswati, Goddess Lakshmi and Parvati. Enumerating and describing the attributes of each goddess, the bhakta bows at their feet.
The varnam, the central piece, was a pada varnam by Bangalore’s famous flautist Shri Mahesh Swami. Sita is held captive by Ravana in the Ashoka Vatika in Lanka. Here, she is pining and calling out to Rama to come and rescue her. While lamenting, she narrates the memories that are keeping her alive. Pleading to ‘Raghuvansh chandrane, Kaushalya sutane Rama’, she says, please come. Going through the life of Rama as Sita’s reminiscences, Geeta depicted the yagya conducted by Dashratha, the fruit given to the three queens, and the birth of the four sons. Kaushik rishi performed the yagya in the forest, and Rama protected them from the demons. Here, special mention must be made of the expression for the demons. Rama weds Sita after breaking the Shiva Dhanush in the swayamvar, and to pacify the angry Parashurama, he strings the dhanush again. Parashurama bows at his feet and leaves. Rama delivers Ahalya from the curse of being a stone and turns her into a woman by touching her with his revered feet. 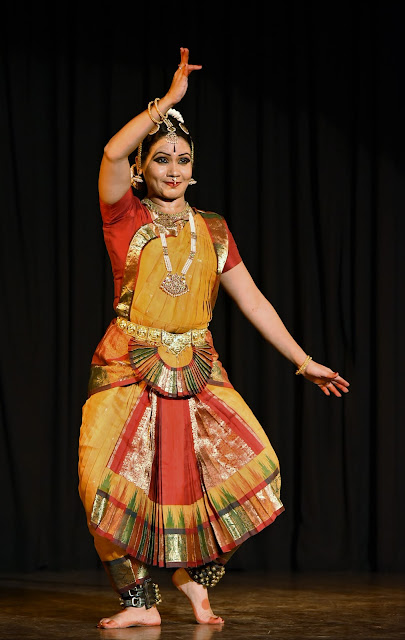 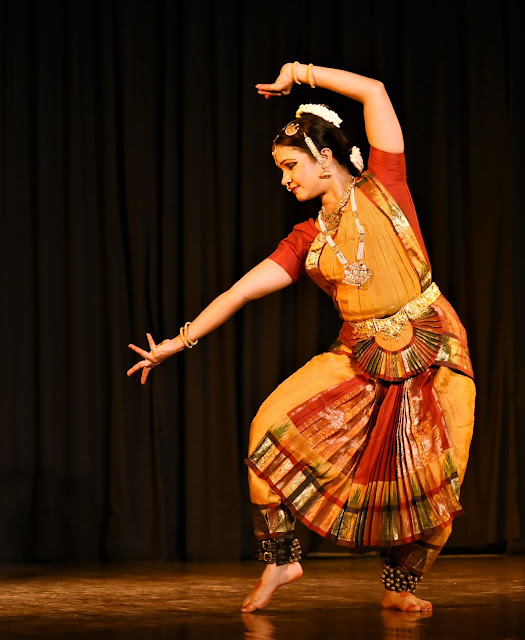 In the second half, as Rama is worshipped as ‘Dashratha nandan, dashabhujavinashaye, shivadhanubhanjesi’, Geeta again depicted the swayamwar, kings coming to lift the Shiva dhanush, and leaving despondent. Rama breaks the Shiva dhanush with poise. Sita, who is then wedded to him, tearfully requests him to come and get her once again. They  together leave for the 14-year exile, in which Surpanakha comes to flirt with Rama and Lakshman chops off her nose. The abhinaya for this sequence again deserves particular mention. The following sequence of events was the coming of the mayamriga or Marich, and finally, Sita being kidnapped by Ravana. Jatayu comes to her rescue, but to no avail. Rama sends Hanuman with the ring to Lanka, and Sita sends her choodamani back. The stances for Hanuman were elaborate, with monkey-like expressions, and Sita again, at this point, beseeches Rama to come to her rescue. The composition was in raag Ramapriya, aditala. The abhinaya was done aesthetically, and the interludes of nritta had leg stretches, leaps, stage coverage, movements with pace, jumps, and footwork. Geeta’s agility is worthy of praise. According to Geeta, though it was a piece to show the grief of Sita, at times she had to hold back the expressions of malencholy to make the performance not very mournful. 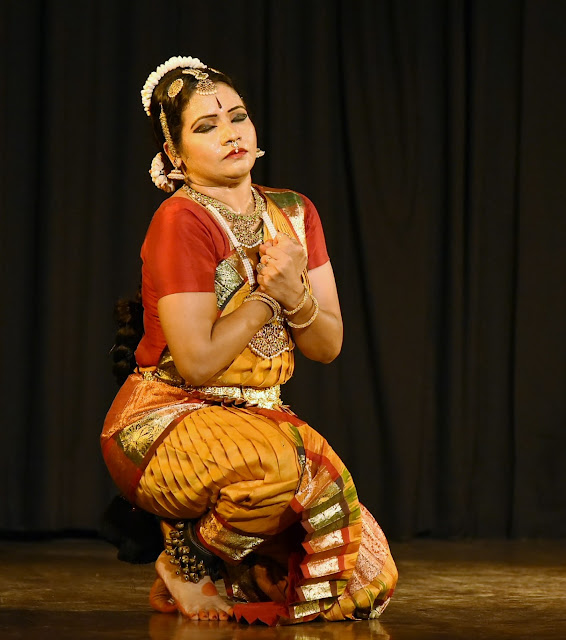 The next piece was a padam. Three nayikas are pleading to Krishna to marry them. The first nayika is 12-13 years of age; she is still young and is the mugdha nayika. She is infatuated by him. ‘Even before I came of age, you showed me the taste of love, so marry me,’ she says. The second nayika , who is around 17 years of age, is the madhya nayika. She says, ‘You took me under the bough and we kissed, so you should marry me.’ The third nayika, praudha says, ‘Since childhood you have known me, we have made love many times, so you should marry me.’ Cornered, the ever mischievous Krishna picks up his flute and escapes. The composition ‘Nanne pendladu hari’ was in raga Mallika, aditala. The padam was an interesting one and the abhinaya was expressive and playful. Each of the nayikas dress up and beckon him, come to me, hold my hand, kiss me and marry me. Krishna comes and plays hide-and-seek with them, playfully embraces and kisses them, and finally, cleverly walks out of the trap. Sirisha adeptly brought out the fun in the composition. 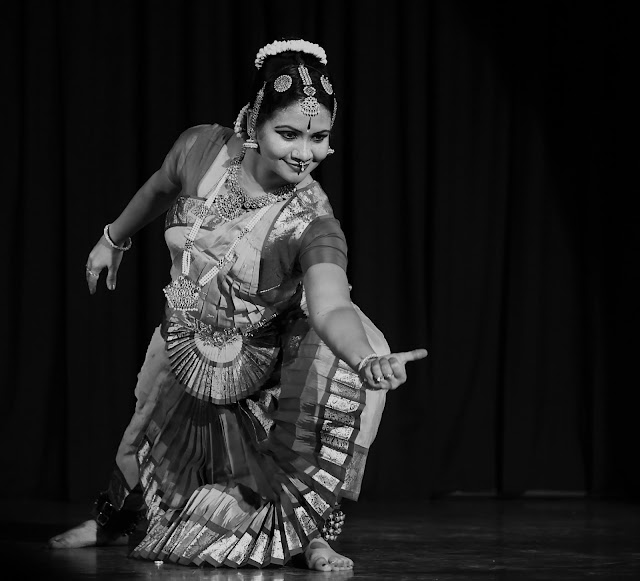 The final javali was a light-hearted composition, and so was the abhinaya. The nayika is lamenting to her friends that she has become the centre of gossip in the whole village, where folks are making up associations between her and a particular boy. She thinks somebody is jealous of her and is spreading this rumour. He is a long-time acquaintance and she had gone to his house to see fireworks, she says. Due to the noise, she had shut the door, and now people are making accusations about her character, whereas there is no truth to them. Sirisha’s abhinaya brought out the misery in the nayika’s act, and yet, the end had an interesting twist. As the nayika is engrossed in this lament, the boy in question passes by. They exchange frantic glances, smile and wave at each other. 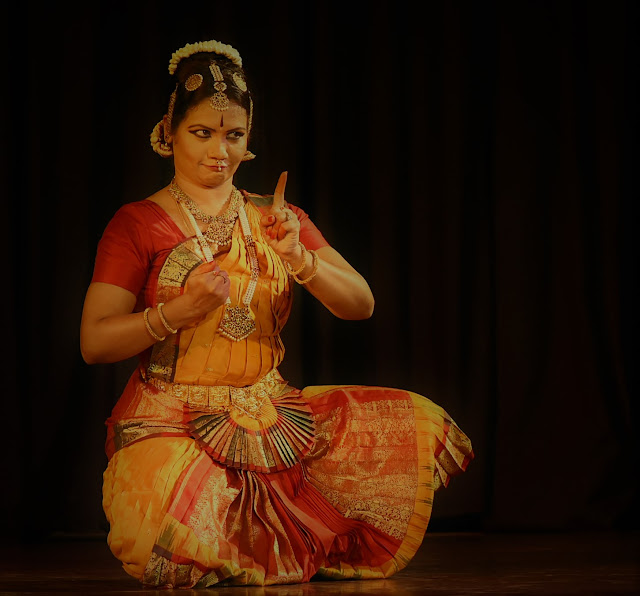 Geeta Sirisha has the poise of a graceful dancer. Her nritta technique is noteworthy and abhinaya is her strong point, with her unusually eloquent eyes.