Shivani Varma performed at the IHC on the 6th of March. The performance was titled ‘Champaran Se Bapu’. Shivani, a lawyer by education, has learnt Kathak from Uma Sharma’s academy and is a disciple of Shovana Narayan. She has performed in several solo and group presentations to critical acclaim. ‘Champaran Se Bapu’ is an original production by Shivani. 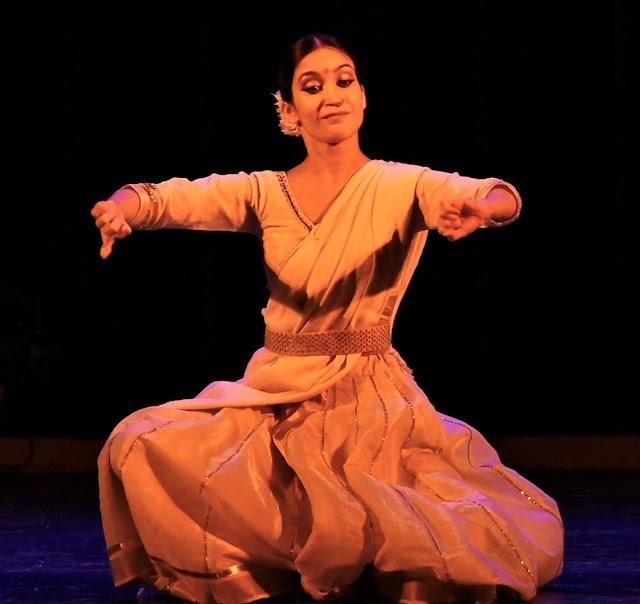 The evening started with a documentary by the National Gandhi Museum about the time when Gandhiji came to Champaran, following his journey from there right up to his death. The documentary was made by A.K. Chettiyar. It was the first documentary on his life, made in 1940. It showed extensive coverage of Gandhiji’s life and his struggle for freedom in India. Champaran was a land of extreme poverty. There was immense suffering and helplessness among the farmers under the oppressive rule of the British. 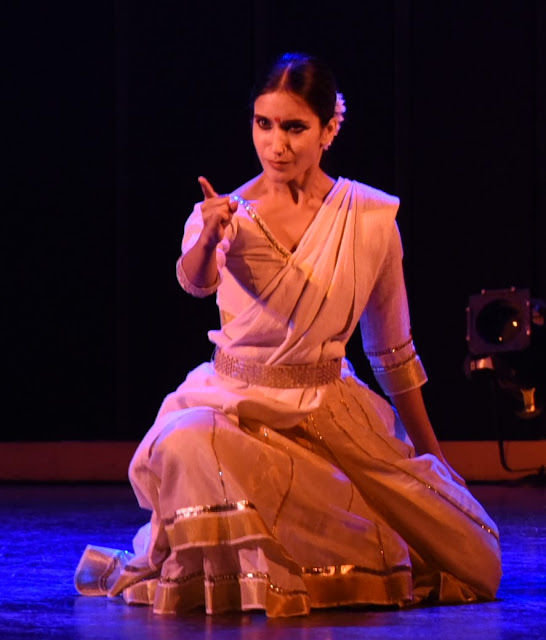 The coming of Bapu was seen as a good omen by the people of Champaran, and so was heralded by a shehnai in the presentation. Shivani showed the train and the throng at his arrival, people calling out to each other, using footwork and uppaj. The idea of truth was woven into the composition ‘Vaishnav Jan To Tene Kahiye…’, written in the 15th century by Gujarati bhakta poet Narsingh Mehta. It was a part of Bapu’s daily prayers. The abhinaya portrayed the puja by the upper castes, which the lower castes are forbidden to attend. Their ‘impurities’ and their touch are washed off. The three monkeys, whose sculpture Gandhiji possessed, were depicted through dance – ‘bura mat suno, bura mat kaho, bura mat dekho (hear no evil, say no evil, see no evil)’. Here, she depicted violence, abuse of women as in the Nirbhaya case, and Gandhiji’s principles of honesty. 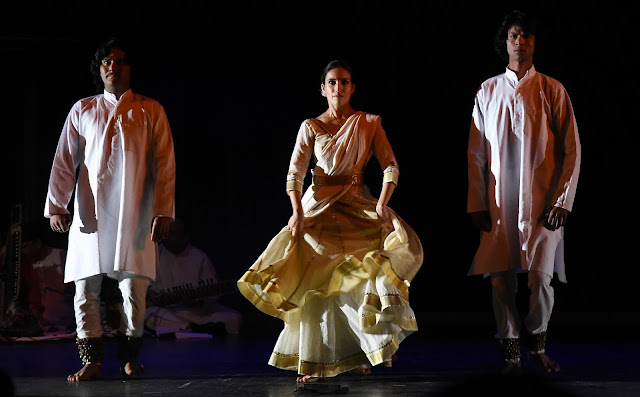 It was at Champaran that Mahatma Gandhi successfully put his experiment of satyagraha to the test. The gallant warrior showed his mantle. Non-violence and ahimsa were his weapons, and satyagraha his path. Here, during the abhinaya, Shivani recited from the old Hindi film song ‘Sabarmati ke sant tune kar diya kamal’ – “Dharti pe ladi tune ajab dhang ki ladai, daagi na koi top na bandook chalai, dushman ke qile par bhi na ki tune chadhai, wah re fakir kya karamaat dikhai… Chutki mein diya dushmanon ko desh se nikaal.” In a gentle way, you can shake the world. If slapped on one cheek, offer the other. This was depicted through nritta, chakkars and clapping, the music comprising the drums, ending in a crescendo, partly to represent the struggle with the Britishers. 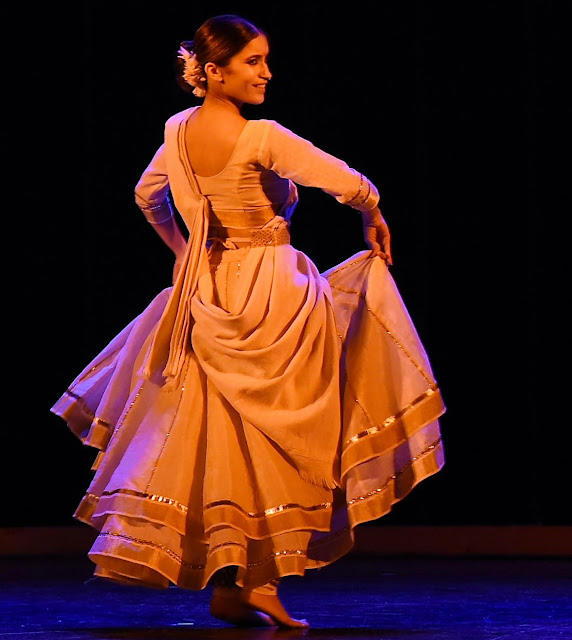 ‘Ekla chalo re’, Rabindranath Tagore’s poetry, has been immortalized by Gandhiji by making it his life mantra. If no one heeds your call, then march on alone. The recitation in Shivani’s presentation started on a soft note, building up the pitch gradually, till it shook you, giving you goosebumps. The two male dancers joined her here, and the nritta and footwork were done with the flair of a determined man who is moving on, come what may. The dramatic effects were given by beats, footwork and claps, and also with the lighting. 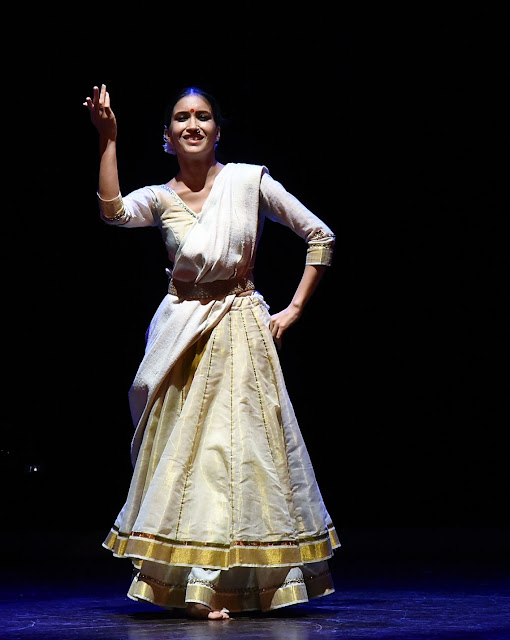 ‘Jag mein koi jiya hai to bapu tu hi jiya, toone watan ki raah mein sab kuch luta diya, maanga na koi takht na to taj hi liya, amrit diya sabhi ko magar khud zeher piya’ – with these lines from the film song again, visuals of Gandhiji were shown in the background. Gandhiji was put in a very difficult position during the Partition. He was very demoralized by the policies that governed it, which were shown by alaap, beats, rhythm and the bol of Kathak. When the rhythm picked up, gat, tihai and chakkars were used. The tying and untying motion while twirling a ribbon was used by Shivani to show how, during Partition, Gandhiji felt he was being cut into pieces. His distress was shown through shehnai, parans and chakkars. 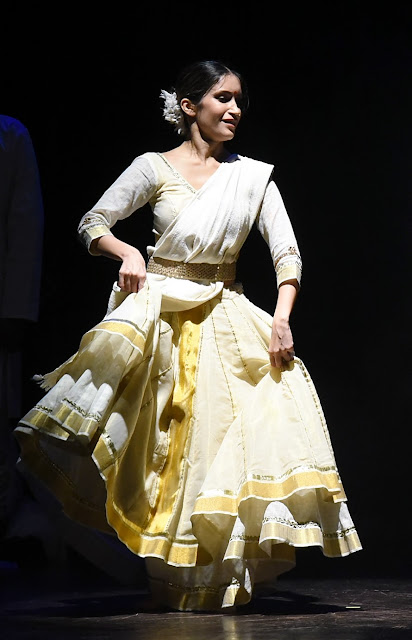 ‘Jis din teri chitta jali roya tha mahakaal , aandhi mein bhi jalti rahi Gandhi teri mashaal’ – with these lines from the same song, twisting feet and expressions were used to show pain, with ‘Raghupati Raghav Raja Ram’ being hummed in a soft music in the background. This was followed by the recitation of ‘Lead Kindly Light’ by Shivani, where candles were brought in by the dancers as well as the audience. 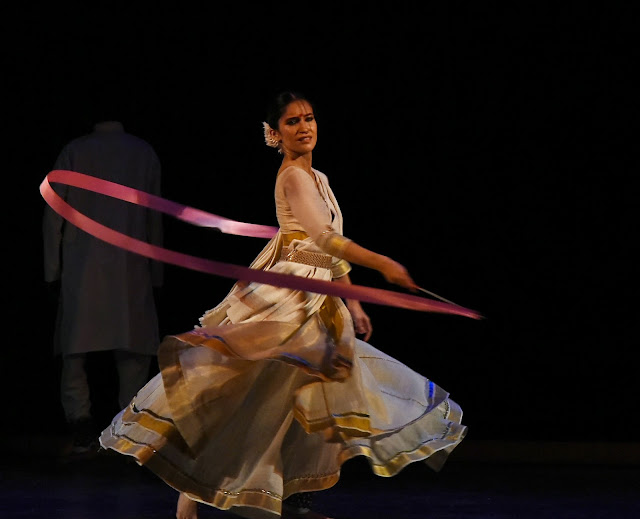 Finally, the two songs – ‘Saare Jahan Se Achha’ and ‘Vande Mataram’ – were enacted and danced. ‘Hindi hain hum’ was used as a chant. The final stance brought in Gandhiji with his charkha.
The music was given by Shri Jwala Prasad ji, who put me totally at ease while talking to him. He said, “Shivani gave me the idea. A long piece or theme is easier to compose for, but short pieces with changeovers – change of raag, change of instrument, the pitch between the male and female voices – are difficult to compose. Suppose one has to leave at dehvat – dha – and the other one has to pick at sa – we have to make a bridge. So we make a little change in the colour of the music. My guru helped me in these difficulties.” He had highlighted one instrument in some piece, and another in others. About that, he said, ‘This is what orchestration is about, because you decide the swaras according to the mood of the piece. Israj par kuch pieces bahut achhe lagte hain. Sitar par jhala bahut achha lagta hai. And there are many other moods like bhakti, deshbhakti, sadness, elation – har piece ki ek maryada hoti hai, aur hume uss maryada ka dhyaan rakhna padta hai.” Talking about the many crests and troughs in the music, he said, “Vaishnav Jan jaise ek composition hai, uski maryada ko hum change nahin kar sakte, badal nahin sakte. Uski dhun ko hume wahi rakhna hoga. But still we have to create music to which she can dance.” 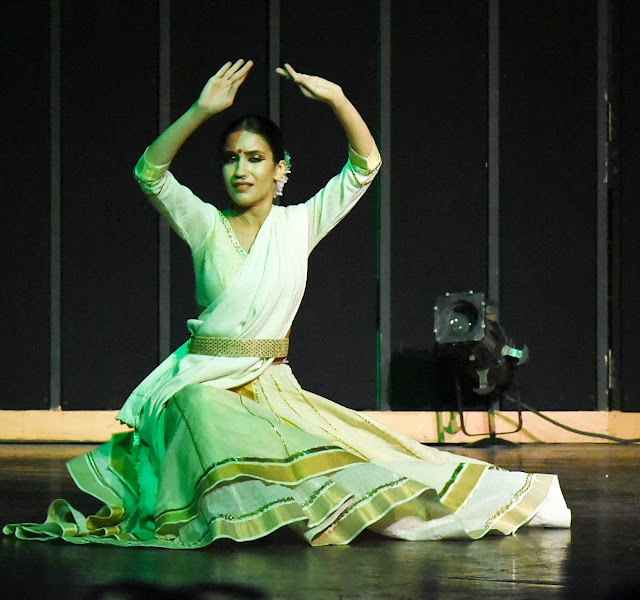 About his music, Shivani said, “I gave the outlines and asked them to work on them. Like I tell him, this is my emotion, and he says Madhuvanti play karo, which appeals to me immediately. He has to choose the raga, I can just tell him my emotion or outline for the piece. When he sings the alaap, it touches me so much, I tell him to go on and on since it really moves me.” Jwalaji replied, “Jab hume kisi ka sangat karna hai toh hume usko follow karna hai. Solo nahin karna hai. If she is like Radha, hume bhi Radha mein hi dhalna padta hai.” 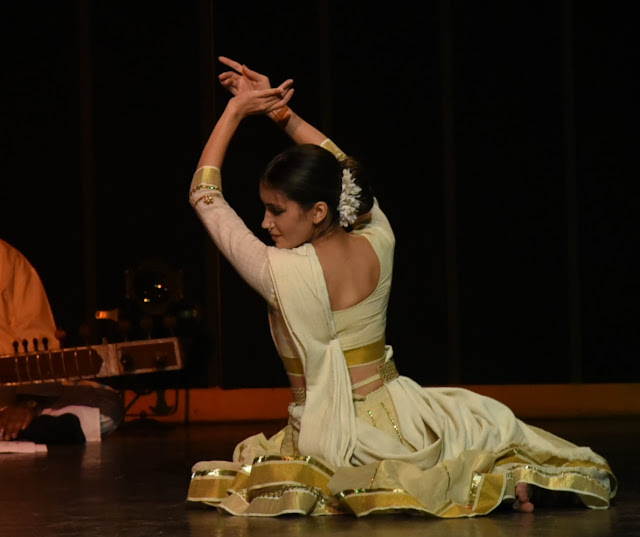 Shivani was approached by Sukanya Bharat Ram, Gandhuji’s great-granddaughter, to do the production, and provided the idea and guidance for it. Shivani gave special thanks to IHC’s Vidyun Singh and to A. Annamalai, the director of the National Gandhi Museum, from which the images were sourced. The technical direction was by Nitin Jain. In the musical credits, tabla was by Yogesh Gangani, pakhawaj by Mahaveer Gangani, sitar by Khaled Mustafa, israj by Arshad Khan, shehnai and flute by Vikas Babu and vocals by Jwalaji and Ranjani Sanyal. The narration and compering were by the excellent-as-always Sadhana Shrivastav.