The evolution and delightful tradition of good Odissi 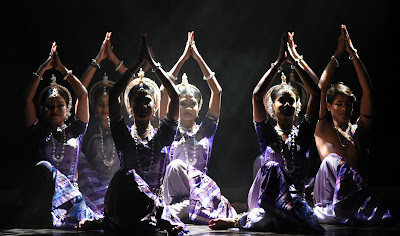 Antardrishti was held on January 9 and 10 at the Stein Auditorium in Delhi. The foyer had a flower rangoli in front of a panel of Guru Kelucharan Mohapatra’s photographs. These pictures still move you – you can see the emotions behind them. The festival was held to celebrate the 91st birth anniversary of Guru Kelucharan Mohapatra, and the performances were by Srjan, now run by his son Ratikant. The legendary Kelu babu, a Padma Shri, a Padma Bhushan and a Padma Vibhushan awardee, the foremost name in Odissi dance, had many students from all over the world, and a prolific body of work, including 200 solo compositions and about 100 dance dramas. 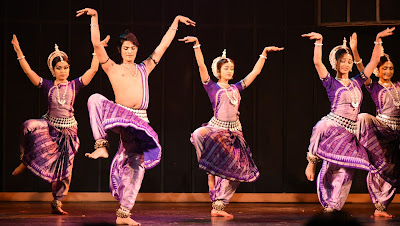 On the 9th, there were innovative group dance recitals. The first piece presented by the group was Ardhanarishwara. It is based on a composition by Adi Guru Shankaracharya, and describes the fusion of Shiva and Shakti. Opposites always attract – the right half is Shiva, adorned with ash, snakes and matted locks, and the feminine left half has turmeric and sandal paste, flowers and jewels. The composition is in raga Mallika, tala Mallika – ‘Om Namah Shivay’. The dancers used freezes and stances to depict the attributes of ardhanarishwara, standing one behind the other to portray the dual form. ‘Karpoorakaye’ or pale as camphor is Shiva, and Parvati is fair, or ‘Gauri’. Shiva has matted locks, wears ‘baagambar’ or lion skin, with agni and damru in his hand, snakes as his ornaments and a garland of skulls. Parvati is the opposite – wearing a garland of flowers and jewellery. One is the destroyer, the other the mother of all creation. The dancers showed excellent coordination – some steps which were really worth watching were the dancers sitting and crossing one leg over the other as they slid forward, and rolling together in coordination. Choreography was by Ratikant Mohapatra, music by Pt. Raghunath Panigrahi, and the lead dancers for this piece were Rajashri Praharaj and Preetisha Mohapatra, performing with the entire troupe.

The second piece was Samakaala. It was an attempt to highlight unusual elements of body language and new and unexpected aspects. The composition was a musical fusion set to aditala, with no specific raga, and provided musical novelty. Some new movements had also been incorporated to allow the dancers to add energy to the movements and geometry to the grammar of Odissi. The footwork in chauka position was well-executed. Odissi, a slow and lyrical dance form, has been totally changed. The dancers executed footwork in rapid nritta to a cycle of 16 beats. This was a very well-coordinated group choreography in which there was no let-up in the energy and pace. Choreography was by Ratikant Mohapatra, music by Agnimitra Behera and Srinibas Satapathy, and the dancers were Rajashri Praharaj, Manosmita Panda, Arpita Swain, Aishwariya Singhdev, Sipra Swain, Preetisha Mohapatra, Riyanka Chakrabarty, Pragna Parimita Das and Sanjay Kumar Behera. 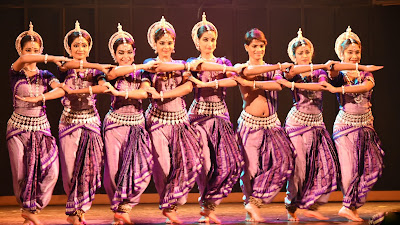 ‘Yei ho Vitthala bhaktajana vatsala’ is a composition by Marathi bhakti poet Namdev. The poet, in deep devotion, refers to the lord as a mother figure. ‘Your complexion is like that of a cloud laden with moisture, you wear a yellow pitambar; come for your devotees, please shower your mercy,’ says the poet – ‘Pandurange karuna karo he, vishwaji janani’. The piece was sung beautifully and choreographed impeccably. It was in raga Megh, aditala. The choreography was by Ratikant Mohapatra, and music by Sridhar Phadake. 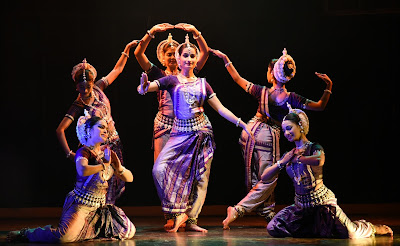 The next piece, the fourth one, was Vishwas. It addressed the social circumstances of the present day. Many religions and faiths are followed – images of worship were shown depicting Hinduism, Christianity, Islam and Sikhism. It was like a dialogue between the devotee and the divine - text from the Sikh Gurbani represented the devotee, and the Sufi poetry of Kabir represented the words of God. The choreography was described as ‘neo-classical, in which various elements have been incorporated into the Odissi idiom’ – elements of Sufi dance were included, ‘Tu hi Ram hai, tu Rahim, tu karim, tu wahe guru’. Jesus carrying his cross and the crucifixion were shown in dance, as was the Kabir bhajan, ‘Moko kahan dhoonde re bande, main toh tere paas mein; bhakt mujhko bula raha hai, main toh hoon vishwas mein’. The music composition by Lakshmikant Palit left the audience rapt, and the choreography by Ratikant was very expressive and well-coordinated, with postures to depict all the gods – a moving piece. 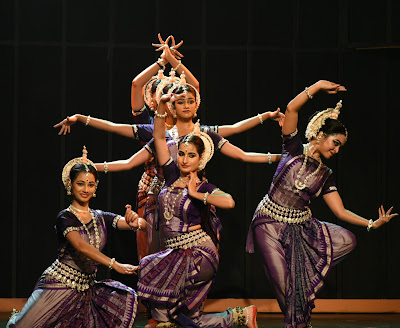 The next piece was Vande Mataram. Bankim Chandra Chattopadhyay’s memorable song, our national song Vande Mataram, describes the rich and varied landscapes of India and its refined consciousness. It was in raga Desh, aditala, with the dancers, through postures and group dancing, exhibited the variety of fauna – deer, peacocks, birds – the flowers and fruits, and the rivers of India – ‘sukhadam, varadam mataram’. The final posture had one dancer posing as Mother India and another dancer forming a pole, while a third depicted the fluttering flag. In a dance choreography like that, the audience gets so drawn in and focussed on the concept that the dance form dissolves, because that is the purpose of the choreographer. In this case, that was Guru Kelucharan Mohapatra himself. The music were by Ramesh Chandra Das and Bijay Kumar Jena. 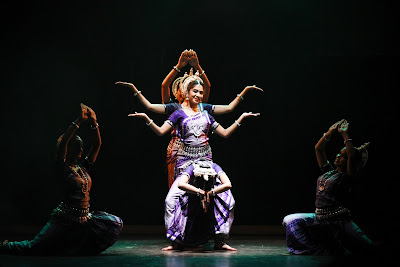 On the 10th, the second day of the festival, I’d first like to describe Namami Gange, a group dance by the troupe. It described Ganga as a vast and sacred river, and depicted its origin. Mythology says that King Sagar performed the Ashwamedha yagya with a lot of rigour and then released the horse. The horse was captured by the jealous Indra, and as a result of a resultant curse, numerous sons of the king were cursed to extinction by the sage Kapila. Ganga, which flowed in all its splendour in the heavens, had to be brought to earth to purify the souls of the dead. The tapasya of Bhagiratha, the descendant of Sagar, brought Ganga to the earth, and her flow was contained by the locks of Shiva. Ganga finally liberated the souls of Bhagiratha’s ancestors. The river, from its origin in Gomukh and Gangotri, descends to Rishikesh and Haridwar, and finally, comes to a slow confluence at Prayag, to meet its sisters at the Manikarnika Ghat. Coming to the present, the narrative expressed distress at the destruction and desecration that Ganga mata is going through. Its medicinal waters and rich silt has given life to man through the ages, but man has polluted the river and ravaged it by releasing waste into it. Human and animal remains are contaminating the water, and the river has been poisoned. We are now facing the consequences of polluting our mother Ganga. Wake up, act urgently now, pledge to restore the divine water, said the presentation. 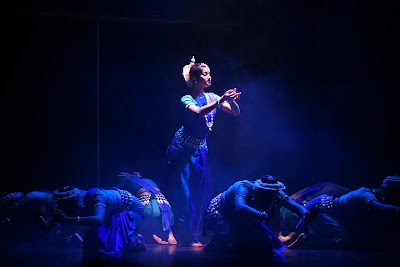 The costumes for the dancers were blue, and Ganga was depicted as flowing freely in the heavens as the ‘supujita Shankara ramane’. The entire sequence of events was portrayed, with the Ganga descending on the locks of Shiva – Shiva is described as the ‘chandra shekhar, maheshwar, parameshwar, jatadhara’, and Ganga as ‘har har bhagwati tarange’, followed by the very famous aarti on the ghats of Rishikesh and Haridwar. Finally, the grim part depicted a boy being carried to the pyre at Kashi, and his remains being immersed in the Ganga. The lighting and the music were the high point of the performance. The technique, coordination, footwork and hastas never faltered. The formations were executed with a lot of imagination, particularly the one depicting a tree with its roots going down, branches going up and animals and birds frolicking around it. It ended on the note of ‘Pranamami gange, namami gange’ (I bow before you, I worship you, Ganga). As has been said before, it was very well rehearsed by the dancers - Rajashri Praharaj, Aishwariya Singhdev, Sipra Swain, Preetisha Mohapatra, Riyanka Chakrabarty, Pragna Parimita Das, Ritu Sengupta and Sanjaya Kumar Behera. The light design and operation were by Debiprasad Mishra. 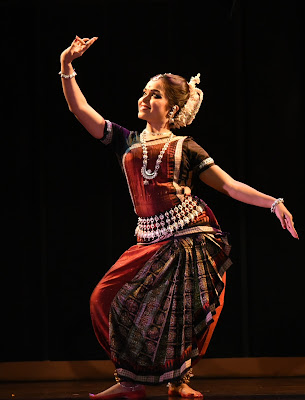 Reserving the best for last, I’m now describing the first part, which requires a special mention – a solo by Rajashri Praharaj. She is a disciple of Ratikant Mohapatra and a senior member of the faculty at Srjan in Bhubaneswar. She’s been awarded the Shringara Mani, and the Bismillah Khan Yuva Puraskar by the Sangeet Natak Akademi. The music and poetry she performed to was based on an extract from Tulsidas’ Ramcharit Manas. 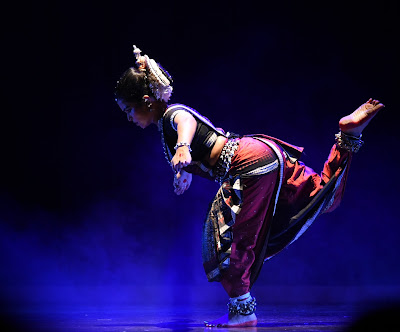 The tale is the oft-visited one, where Ram, Sita and Lakshman are staying at the Panchavati during their exile. Sita is enamoured by a golden deer. This deer is the demon Maricha in disguise. Sita pleads with Rama to get the deer, Rama pursues the deer and shoots it, and the deer calls out for Lakshman for help. Sita urges Lakshman to go and look for Rama, and he is forced into leaving Sita alone, but only after putting her in the safety of a Lakshman rekha. Ravana comes in the disguise of a sage asking for alms and forces Sita to come out. She is kidnapped and Jatayu comes to her aid. He fights valiantly, and is finally dismembered by Ravana. The musical track was very lyrical. The dance involved a soloist essaying many roles together. 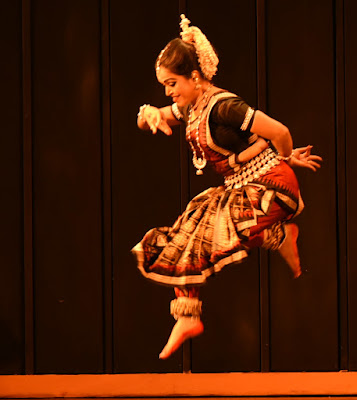 Rajashri’s depiction began with her as Sita outside her hut, where she is picking and stringing flowers, enjoying the tranquillity of nature, when she sees the golden deer. She tries to feed it and catch it, but fails and finally calls Rama to go after it. Rajashri’s act of the deer prancing and running away, and then Rama running after it, had immense energy and action. The depiction of Lakshman had a lot of the attitude associated with that character, leaving Sita with a lot of reluctance and drawing a rekha around her. Ravana’s role was essayed with a lot of ferocity. Both the acts – of Lakshman, caught in a dilemma, and a cunning and cruel Ravana – were executed with a great deal of energy and expression. The fight between Jatayu and Ravana too was rendered very well. Jatayu injures Ravana with his sharp beak, but Ravana cuts off his wing and Jatayu falls with a cry of ‘he Ram’. Altogether, a very riveting piece, interpreting each character and executing each with a lot of expression and energy. The natya part was the highlight. 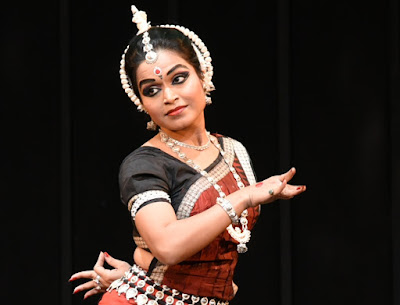 On the two days’s programme, Ratikant remarked, “I always wanted to revive the legacy of my father, but not copy and paste. So I created some new movements in Odissi which the dancers are using now. Though I do not go out of the grammar and tradition of Odissi, its costumes and accompanying instruments, particularly the mardala, I do innovate with the lighting, the stagecraft and music. I do not use any props; I try use the dancers’ bodies to create them on the stage, which is a challenge. Today, it was not a margam performance (on the 9th). Usually, people think that classical dance is very slow and monotonous, but Baba has created wonders. I portray them through my idiom. For 30 years, I have seen the journey of Odissi and its evolution. With the experience of all these years, I had concluded that 80% of the audience does not understand the grammar of the dance. The 20% who understand would as it is come to watch, but the effort is to appeal to those with speed and pace, without going out of the shastra.”