On the 23rd of October, Triveni Kala Sangam in Delhi was bedecked in beautiful flower rangolis all over the foyer, when Sujata Mohapatra and her disciple Soumya Das put up a performance under the Parampara series. Sujata is a renowned Odissi dancer, and the daughter-in-law and disciple of Padma Bhushan Dr Kelucharan Mohapatra. On one hand, you saw the fluidity and lyricism in her dance, and on the other, she has mastered the technique of her guru. She is a devoted disciple and adheres strictly to his style. 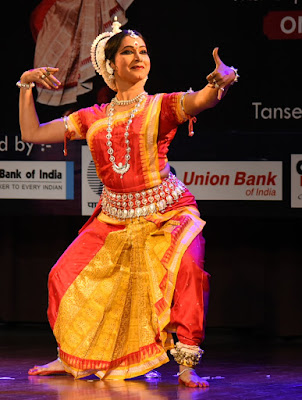 The first piece Sujata presented was a mangalacharan, an invocatory piece in raga Megha and Kedar, taal ektali. The performance started with a pushpanjali to Lord Jagannath, ‘Jagannath swami nayan path gami’. This was followed by a Ramastuti – the lord is neelam, or blue-coloured, like the peacock feathers, and has lotus feet. He wears the peeta vastram or the yellow dhoti, is sarasij nayan – lotus-eyed – and holds the dhanush as a weapon. Lord Rama in the Sita swayamvara strung the Shiva dhanush and broke it. Rama has been helped by Hanuman in his war on Lanka. Hanuman brought the Sanjeevani buti and the monkeys are his warriors. The abhinaya was perfect, with interpretations and depictions through gestures and stances. The dance to depict the monkeys was especially well done and in the nritta part, each action was complete and consummate. The footwork was excellent, with balancing stances and leaps. The choreography for the piece was by Guru Kelucharan Mohapatra and music by Pandit Raghunath Panigrahi. 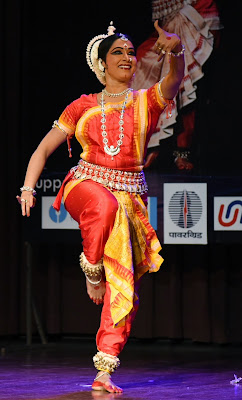 The second piece was a pallavi, a pure dance piece in raga Megha and taal ardhajhampa. The piece is characterised by movements of eyes, neck, hands, torso and feet, and culminates in fast-paced nritta. Sujata executed some flawless technical dance with chauka and slow lyrical movements. Her footwork and leg lifts were flawless. The choreography was by Ratikant Mohapatra and music by Pradeep K Das. 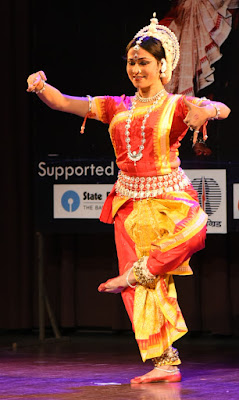 The third piece was ‘Kedechhanda jaanila sahi’, written by the Odiya bhakta poet Banamali. The composition depicts the leelas of the bala, or child, Krishna. Mother Yashoda puts her child to sleep in a palana. The demoness Putana picks the child up and starts to suckle him. But Krishna bites her so hard that she cries in pain and dies. The depiction of the demoness by Sujata was very evocative. Krishna, while roaming the woods of Vrindavan, is attacked by Dhenukasura. Krishna holds him by his horns and after a battle, kills him. He also vanquishes Bakasura by holding his beak and tearing it apart. He is the one who drinks the agni in the woods and prevents it from spreading. When Indradeva is annoyed and there is incessant rain in Brajabhumi, Krishna lifts Giriraj on his little finger and saves the cattle and people of Vrindavan from the wrath of Indra. When the waters of the Yamuna become poisonous due to the Kaliya naga, Krishna goes there to play with the ball and jumps into the water. He vanquishes the serpent king. Finally, the last leela portrayed is that of little Krishna eating mud. Mother Yashoda hits him for doing so and insists that he open his mouth. When he opens his mouth, she sees the entire universe inside it. The nritta part was again meticulously executed, taking stances. The footwork was flawless and it was the abhinaya that was commendable. Special mention for the expressions of a mother who is annoyed and then shocked and then overawed, and yet lovingly hugs her child, kisses him and puts him to sleep. The choreography was by Guru Kelucharan Mohapatra and music by Pt Bhubaneshwar Mishra.

The final piece was Ardhanarishwara, which was presented by Sujata and her disciple Soumya Bose, who holds a Master’s degree in Odissi dance. The piece depicts the relationship of Lord Shiva and Parvati as two halves making a whole. Parvati is the left or the female energy, and Shiva is the right or the male energy. The dance presented both the lasya and tandava aspects. The composition was in taal Mallika, raag Mallika. 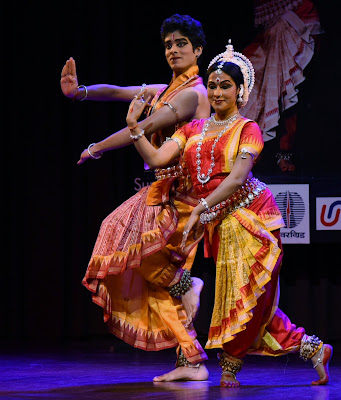 The two dancers compared the attributes of Shiva-Shakti through interpretive dance and stances. Parvati is gauri, or fair, and Shiva is karpoor gaur, the whiteness of camphor. Parvati is adorned with ornaments, and Shiva has snakes entwined as ornaments. They bear the moon on their forehead. Parvati is the jagat janani, whereas Shiva is the god of destruction when he opens his third eye. Both have the trishul as their weapon. The freezes and stances were commendable, the footwork, hastas, abhinaya done with a lot of exactitude and great coordination and companionship. 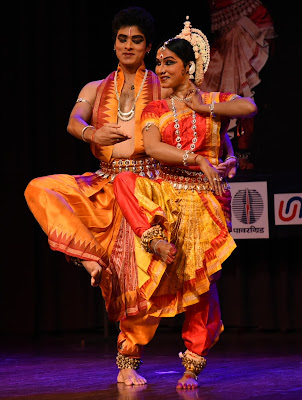 Sujata said that the choreography was initially a solo, “but when there is a male dancer available, we always bring in the male energy to the dance. It was Guruji’s favourite choreography, done for Sanjukta Panigrahi, and it was done for her tall frame and her energy. But for me, Guruji changed the choreography for my height and ability.”