Many nayikas, one young narthaki

Young dancer Tanya Saxena performed at the IIC in Delhi recently, and left the audience greatly impressed by both her talent and her training. Tanya is a disciple of Guru Saroja Vaidyanathan and Rama Vaidyanathan. She is an active performer with Spic Macay, and a promising young dancer with many performances to her credit. 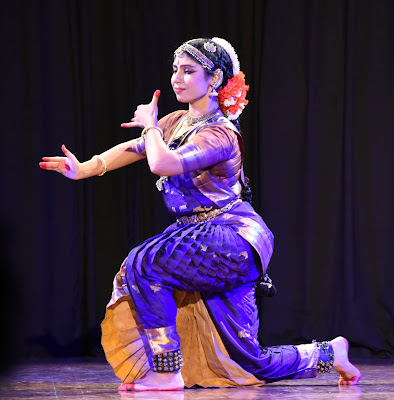 The first piece for the evening was Madhurashtakam, composed by bhakti poet Shri Vallabhacharya. Madhuram is beauty with sweetness, which is attributed to all aspects of Lord Krishna by the poet. His lips, his body, his eyes, his heart, and all associated with Him – his cows, the Yamuna, gopis, lotuses… all are pleasure-giving. It was interspersed by a shloka by Kalidasa, which says that Krishna’s footprints are still in Vrindavan. The composition was set to raag Tilang, choreography by Rama Vaidyanathan, music by Karaikudi Sivakumar. 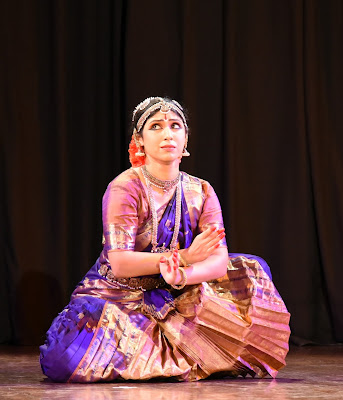 The next piece was a varnam by the Tanjore Quartet. The varnam depicted the virahotkhandita nayika pining for Lord Vishnu. The composition was set in Reetigowla ragaam and adatalaam. The choreography was done by Rama Vaidynathan, with jathis and rhythmic patterns composed by Karaikudi Sivakumar. The bhakta says that her faith in him grows each day, from a small seed into a big tree. The nayika feels the presence of the Lord everywhere – in the mirror, while getting dressed; she hears him, feels him pull at her sari, and embrace her. The piece was beautifully depicted by Tanya through expressions and gestures. The Lord is addressed as the one who has fathered Kamadeva, and the nayika is struck by the arrows of the god of love. The nritta interludes had lifts, leaps and balancing moves. The nayika further pleads herself as a servant to the lord. He alone is the cause of her existence, like a fish in water. He is like the Sun to the lotus of her life. The Lord is depicted with his shankha chakra, reclining on the shesha shaiyya. The nayika is serving him by pressing his feet, in a varnam executed with a lot of impressive abhinaya and a lot of energy and stamina. Tanya said that the varnam was a rare one, in the format of a pallavi. 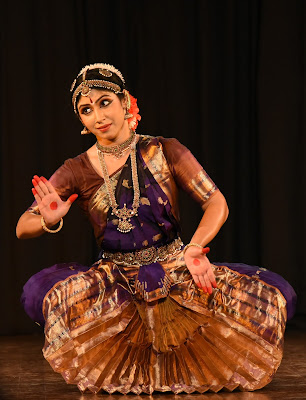 The next composition was a padam, composed by Shri Balamuralikrishnan, set in raagam Murali, mishra chapu taalam. Tanya’s abhinaya for this piece had distinct imprints of her guru, Rama Vaidyanathan. The piece depicts the khandita nayika. She is jealous, and annoyed with Krishna for visiting the other sakhis. Here, the nayika tells him that he is the height of drama, for he can disguise his cheating from her. She says, “Do you visit them for their snake-like hair, or swan-like walk, or their fish-like eyes? Stay on the threshold of my house (and do not enter)!” It was an interesting piece with a lot of scope for emotions, and Tanya did justice to the myriad emotions – the anger, the underlying love, the jealousy with a bit of craving, and the arrogance disguising her vulnerability. The entire presentation was well-rendered. Tanya said, “I have struggled with this padam. The khandita nayika here does not appear to be very young. She is mature, so she does not lose it outright.” She said she found it difficult to switch the mood of the nayika from virahotkhandita in the varnam to a very composed khandita in the padam. 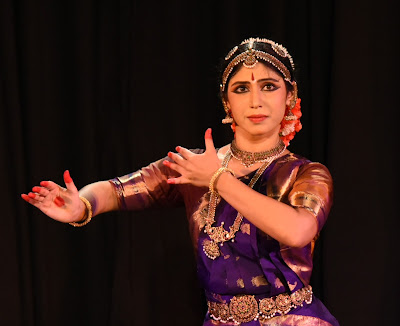 The next composition was written by Ambujam Krishna in raagam Kamaranjini and khanda chapu taalam. This composition describes the story of Bhattatheri as he writes the Narayaneeyam. The procession of the Lord Guruvayoor proceeds with elephants, drums and manjira. The bhakta is writing about the Lord but finds himself incapable of it. With divine blessings, he has a vision of the raas of Krishna with gopis. He sees the raaskeli, the anklets of the gopis, the vanamala of the Lord, the tinkling of the waistbands. He has written his composition of the raas, but when he awakens from the trance, he has no memory of doing so. The entire composition was a vision of the raas – such is the kripa or kindness of the Lord. This particular piece was rendered by Tanya with a lot of emotion. The expressions of the bhakta were gripping. The choreography was again by Rama. 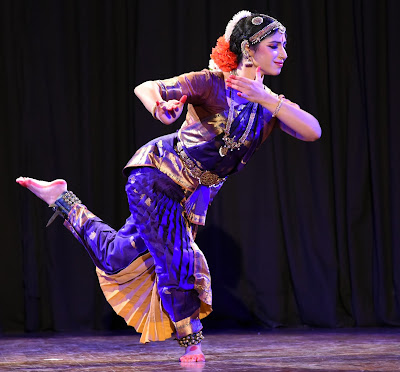 Lastly, Tanya performed the thillana in ragam Varamu and aditalam, composed by G. S. Rajan. It has a shloka about the Devi burning with desire for Lord Shiva. The nritta had tempo, energy and technique. The choreography was again by Rama, and rhythmic composition by Karaikudi Sivakumar. 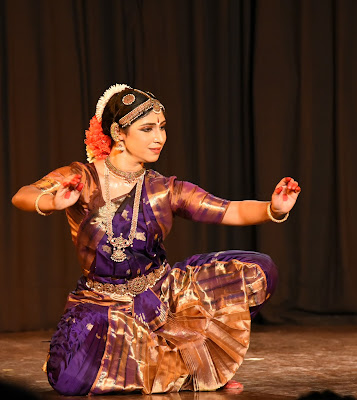 The accompanists were - Dr. Vasudevan Iyengar on nattuvangam, K. Venkateshwaran on vocal and Sumod Sreedhar on the mridangam with the brilliant-as-usual Rajat Prasanna on the flute. 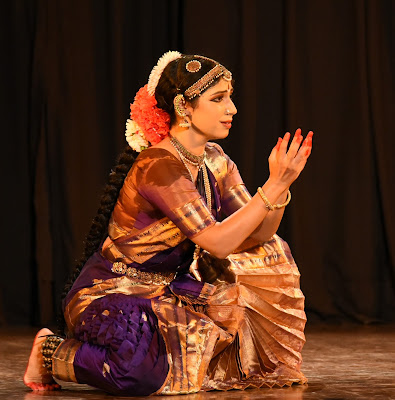