A nayak dancer to watch over and over


It was an evening of dance organized by the IHC for promoting young dancers in Delhi, but the turnout seemed unfair to Pavitra Bhat, the very skilled young man who performed. The ceremonial lamp for the event was lit by Dr Leela Venkatraman. 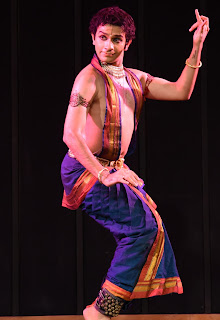 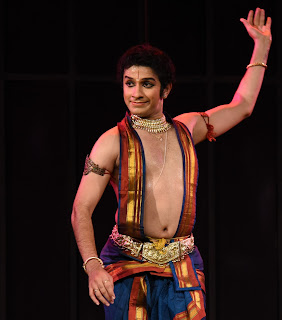 He began the evening’s performance with a pushpanjali to Lord Nataraja - a melaprapti with Konnakol verse. This was followed by an alaripu in Khandachapu, a composition by Oothukkadu Venkata Kavi. It was an ode to Lord Ganesha – ‘Vighnarajam bhaje’. Pavitra depicted Ganesha as the son of Shiva, with a trunk and elephant ears, his steed the mouse. 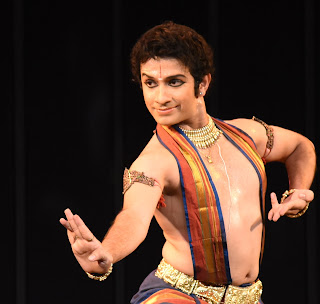 Next, he performed a varnam, ‘Shri Krishna Kamlanathu’, in Reethigowla in aditalam, elaborating on the leelas of Shri Krishna from his birth to the Gita upadesh. In his portrayal, Pavitra started the tale from when Vasudev and Devaki are taken prisoners by Kansa. When they see the chaturbhuj form of Krishna, their shackles are broken and the gates of the prison open. Baby Krishna is carried by Vasudev on his head in torrential rains, covered by the hood of Shesha, and so He is called the Vaasudev. 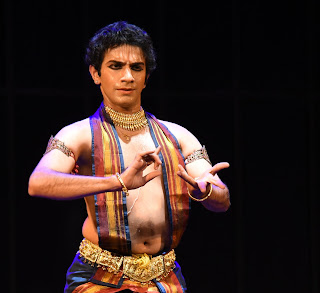 The next incident was that of Pootana, who lifts baby Krishna from his cradle and tries to feed him poison , but is killed by the little one. The act was done quite well - Krishna was depicted as one with the glow of thousands of suns (suryakoti samaprabha). The story of Govardhan puja followed - how Krishna saves the people and cows of Vraj from the wrath of Indra, who sends torrential rains to drown them, by lifting the parvat (mountain) on his little finger. Krishna then vanquishes the serpent Kaliya and dances on its hood holding its tail. And finally, a disheartened Arjuna is enlightened and shown the path of righteousness by Krishna, who is also his charioteer. It was a long composition and Pavitra executed it with immense stamina. Finally, he ended the performance with a thillana set to Vrindavan Sarang in aditalam. It was an ode to Lord Krishna, depicting leelas like jhoolan on the shores of the Yamuna. 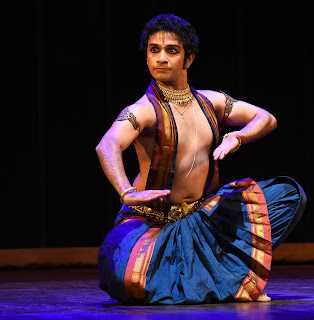 Pavitra has a very tall frame, and all throughout these pieces, he performed with great poise, grace and energy. The footwork was quick with many leaps - he would come right to the front of the stage and you could hear the exactitude of the footwork on the mic. His hastas again had a perfection and sharpness of movement. The interpretative dance had good mukhabhinaya, stances and gestures to depict the tale, which was presented with great proficiency. 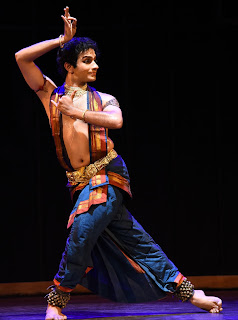 In between these pieces, he also did a shringara padam set to Senchurti Raagam, taal mishrachapu, a composition by Balamuralikrishna. It was a rare padam by the hero or nayak. The nayak tells the nayika that she should not make an excuse and go away on that night. He gathers lotuses and makes a bed for her, and shows her the bee hovering over a flower. In his passion, he embraces her and finally, she consents. That a dancer with so much energy in his nritta could infuse so much emotion and sensuousness into a piece was amazing. The performance was brimming over with an abundance of talent.