A festival of Indian classical music and dance was held at the Ravi Shankar Centre in Delhi to celebrate the 96th birth anniversary of Panditji, just like it is every year. On the second day, the 5th of February, Abhishek Lahiri gave a sarod recital, and Abhimanyu and Vidha Lal performed Kathak. The centre looked like a shrine, a temple of music. As you enter the place, you do feel the ambience and vibrations. On one side is a statue of Pt Ravi Shankar with a sitar in his hands. Below is written his title, ‘Nada Brahman, Vishwa Ratna’. Inside, in the amphitheatre, are lattices and stone statues. The entire place had flower rangolis and diyas flickering - very beautiful indeed. However, what I most prominently remember about the evening was that it was extreemly cold! The dancers were sitting and dancing on a very cold stone floor, with the winter Delhi sky starless and grey-black as usual.


Abhishek Lahiri is the son and disciple of the sarod maestro Pandit Alok Lahiri. He has many awards and accolades to his credit. He gave a sarod recital with Akram Khan on the tabla. They played a composition in raag Yaman, aalap and jor jhala, a bandish in roopak teen taal and lastly, in Mishra Pilu. It is amazing how, using just your fingers, you can make an instrument play so many sounds that it sounds complete. Akram Khan was excellent on the table as well.


Abhimanyu and Vidha Lal are disciples and the son and daughter-in-law of Guru Shreemati Geetanjali Lal of the Jaipur gharana of Kathak. They have performed extensively and have many awards to their credit. The first composition was ‘Hari Hara’. The stage was lit with a blue light in which their yellow costumes became florescent. The composition is about a comparison between Hari (Vishnu) and Hara (Shiva). Vidha said that since Lord Shiva represents the taandav roop and Vishnu shows the lasya roop, that is why they used the male and the female counterpart. “This is a bandish composed by Baiju Banwra. The music was given by Guru Geetanjali Lal, set to a cycle of nine beats,” she said. 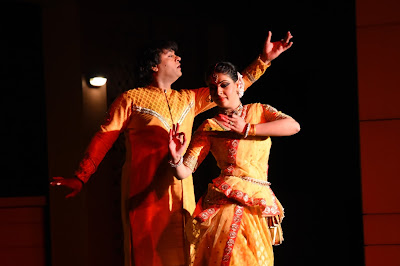 
In the technical part, Abhimanyu began in vilambit laya, doing the upaj, gat, shifting of feet, footwork, uthan, bandish, thaat, aamad, paran and lamjhad paran. He did a paran that he said was like the tail of a cow because of its shape – thick in the beginning and tapering in the end. He did it again using leaps and footwork. These were all special compositions of Jaipur gharana. Next it was a tukda, a kayda on footwork. The technical part had a lot of pace, percussion and expertise.


The next composition was an abhinaya piece written by Raskhanji. Vidha described her abhinaya in the piece, saying that Radha sees the bansuri as the other woman in Krishna’s life. She tells him that she loves him so much that she is ready to become just like him, to do what he does, but never put the bansuri to her lips. The poetry says that Radha is so jealous of the flute on Krishna’s lips that she would wear the peacock feather on her head, the flower garland around her neck and repeat Krishna’s leelas in Vrindavana – anything but put the flute to her lips. 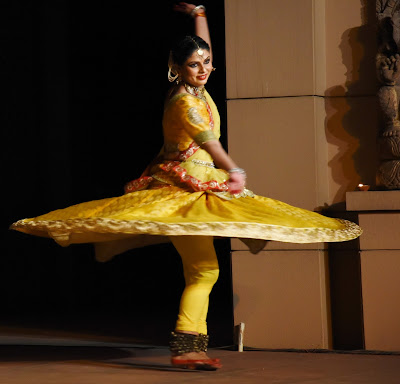 In the depiction of the poetry, Vidha showed Radha going to the shores of the Yamuna to fetch water, when she hears the flute and goes out to look for Krishna. When she finds him sitting in a trance with the flute on his lips, she gets jealous and snatches it from him, runs away and tucks it in her waistband. Then she goes out after the peacocks to get its feathers. The movements of the peacock were beautifully done by Vidha while cocking her neck and shoulder movements. 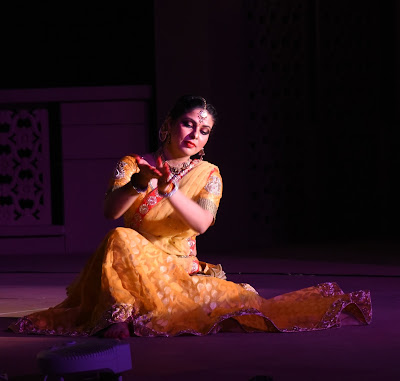 She emulated Krishna as the one who throws stones to break the pots on the heads of the gopis, steals their clothes while they bathe in the river and steals their butter too. Vidha did a very elaborate act as Krishna, showing him calling his friends, climbing on their backs and shoulders to reach the pot of butter, breaking it and eating the contents. Vidha was flawless with her abhinaya. 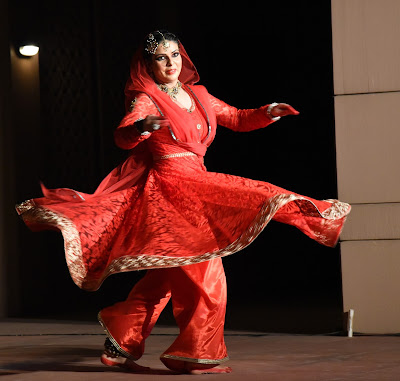 Then, with a costume change, Abhimanyu did layakari with aaroh and avaroh, paran, tukda, ulte seedhe chakkar and ginti ki tihai. This was in dhrut laya, jaati, two to eight  and then coming back. They performed chakkardar paran, chakkardar tukde, tihaiyan and finally, ended with a jugalbandi in which they had a sequence of the audience clapping and them keeping time with their footwork. Both the dancers have immaculate technique. Vidha and Abhimanyu are like beauty and bhava married to technique and chakkars to footwork with slight romancing on the stage.

The artists accompanying them were Akhilesh Bhatt on the tabla, Salim Kumar on the sitar, Mahavir Gangani on the pakhawaj and Amjad Ali on vocals and harmonium.