Devotion to dance, devotion through dance


Under the HCL concert series, Nehha Bhatnagar, Himanshu Srivastava and Amrit Sinha performed at the IHC, Delhi on the 24th of July. In the foyer leading into the auditorium, a figurine of the devi was very creatively arranged, wrapped in a red sari, surrounded by flower petals. 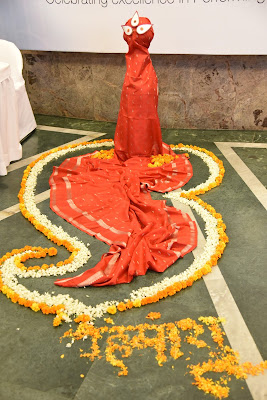 Nehha Bhatnagar is a young classical dancer, a senior disciple of Padma Bhushan Dr Saroja Vaidyanathan and Guru Rama Vaidyanathan. She has performed widely in India and abroad as a group artist and as a soloist. She is an empanelled artist with the ICCR, and is the curator and licensee of TedX Tughlak Road. 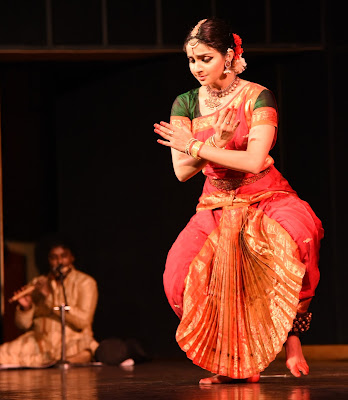 She is the founder president of Sarvam Foundation. Sarvam is an endeavour to celebrate the Indian performing arts through unique collaborations and festivals. That is also the thought behind them organizing charitable classes in Bharatnatyam for underprivileged children in government schools. Six girls from among these children from the slums were selected in June 2015 for a three week international performing arts festival in Poland, where they taught children from 20 countries Bharatnatyam and Yoga. This gave these underprivileged girls a sense of confidence and pride.
Himanshu Srivastava is a promising Bharatnatyam dancer under Guru Saroja Vaidyanathan and Guru Rama Vaidyanathan. Amrit Sinha is also their disciple and runs a school of his own in Lucknow.
The entire performance had an abundance of energy of youth and yet a maturity in abhinaya. Nehha began her performance with a devi stuti. The goddess holds a lotus and a veena in either hand, as also many weapons in her other hands. Her vahan or vehicle is the lion. She is the destroyer of evil. In her interpretation of this piece, Nehha shows the ‘raudraroopini’ or the angry side of the devi. She holds the trishul in her hand and is the destroyer of the demon Mahishasur. She wears a necklace of the skulls of demons. But at the same time, she is the mother and blesses her devotees. This piece was choreographed by Rama Vaidyanathan. The verses were from Durga Saptashati and music was composed by G S Rajan, in ragam Gowlai, Suruthi and Hamsanandi, aditalam. 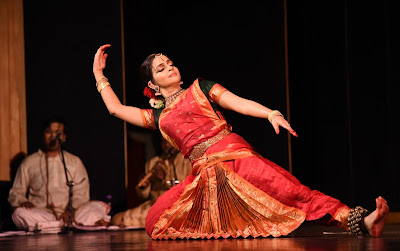 Nehha’s interpretative nritya expressing the attributes of shakti and nritta were powerful. She had perfect hand and feet movements, with a very expressive face. The high point of the piece was the stance taken for riding the lion, the pace of it and the energy of the leaps. 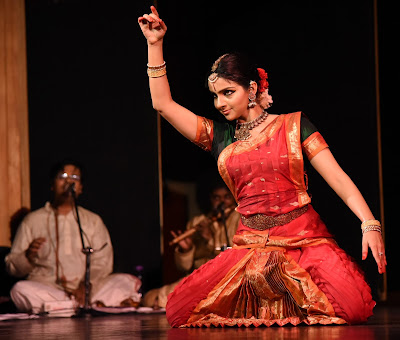 The second piece, Pannagendrashayana, is an ode to Lord Padmanabha. The Lord reclines on Adishesha (serpent) in the ocean of milk, for which Nehha did the reclining stance in many ways, at one point squatting and bending backwards. The bhakta pleads with the Lord to open his lotus eyes. Her pleading, full of pain, and expressions were brought out very emotively. The bhakta goes on to say that the wind too stings her. The fragrance of the Lord drives her pain. The Lord has teeth like the pearls from an oyster, the sound of the birds heighten her pain. People laugh at her and make fun of her. The arrows of Kamadeva shower her. The Lord’s lips are red like the fruit of the bimba tree. The bhakta’s eyes hover on his lips like the bee on the flower, drinking the nectar. The pitambara or the yellow cloth of the Lord looks strikingly awesome on him. Finally, the pleading devotee says, “You have four arms and yet you do not embrace and hold me.” This again was a piece of intense abhinaya to show the emotions of the devotee. Nehha depicted the Lord with a gait like an elephant’s and feet like lotuses. Her eyes expressed the pain of the bhakta, the pining, the craving that she experiences. For this piece by Maharaja Swathi Thirunal in ragam Shankarabharanam, Kamoji, Neelambar, Bhairavi, Todi, suruthi, Mayamalagowlai and Bhoopalam, taalam Roopakam, the choreography was done by Rama Vaidyanathan. 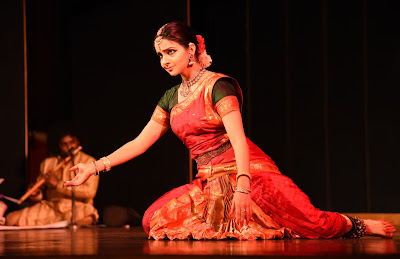 The third piece, composed by Gopalakrishna Bharati in ragam Sindhubhairavi, aditalam, was an ode to Lord Nataraja, the god of dancing. When he dances at the Chitasabha at the Chidambaram temple with his left foot lifted, the entire universe trembles with his moves. The adishesha who balances the earth on his head is also forced to regain balance. Amrit and Himanshu’s interpretation depicted the damru and agni in the Lord’s hand, Ganga flowing from his head, Shiva riding on the bull, the half moon on his head. The pace, the leg lifts, the leaps, the footwork were all perfect. The stances taken by the duo in their depiction were amazing. This piece was choreographed by Guru Saroja Vaidyanathan.
Next, Nehha performed a nritya piece on a Meera Bai bhajan. As the lyrics were beautiful, so was the music and the abhinaya. ‘Kunjan van chhadi, he Madho, kahan jaaun, gun gaaun’ (Where shall I go after I leave you). Meera as a devotee pleads with Krishna to keep her with him constantly. If she were to be a fish , she could caress his feet when he bathes. As a cuckoo she would sing to him when he grazes his cows, as a pearl she would adorn his neck. The depiction of the emotions was done with a lot of expressions, yet not taking away from the pace of the movement  and stances, some taken in broad plie . The song by Meera Bai was choreographed by Guru Saroja Vaidyanathan . The composition was in Raag Yamuna Kalyani, Aditalam. 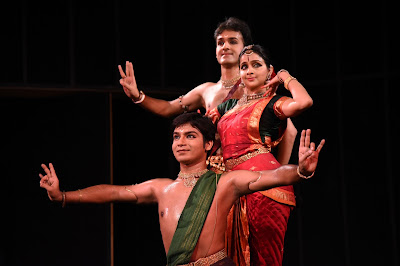 Finally, the trio presented a thillana, an aarti to Lord Murugan. The Lord holds a trident and rides a peacock. It was a fast-paced thillana and the dancers depicted the playing of the musical instruments and the attributes of the Lord as an ode to him. The performance ended with a mesmerizing nritya on ‘Vande Mataram’, our national song. The depiction of the lyrics was done through stances by the three dancers. The choreographer and composer of the piece was Guru Saroja Vaidyanathan. The composition was in ragam Bihaag, aditalam.