If you want to see a performance that is perfect to the hilt, this one was for you. Effects, sound, music, choreography, dancers - everything was just perfect. No wonder Kamani Auditorium in Delhi was full to capacity with a very enthusiastic crowd on the 26th of October, when 'Brahmakalpa' was performed by Rama Vaidyanathan and Ajit Bhaskaran Dass from Malaysia. The evening was sponsored by Sarvam Foundation, partnered by Kri Foundation.


Rama Vaidyanathan is the disciple of legendary dancer Yamini Krishnamurthy; she has also been under the guidance of the eminent guru Saroja Vaidyanathan. She has been awarded the National Excellence Award in Delhi, the Great Indian Women Achiever award in Mumbai and many other prestigious awards.

Talking about the performance, Rama said, ”Brahmakalpa is a unit of time for supreme consciousness or Brahma. I got good Sanskrit text from the Vedas about the subject and so it was not difficult to translate into dance. I very religiously used the grammar of Bharatanatyam for the pure dance sequences and abhinaya." 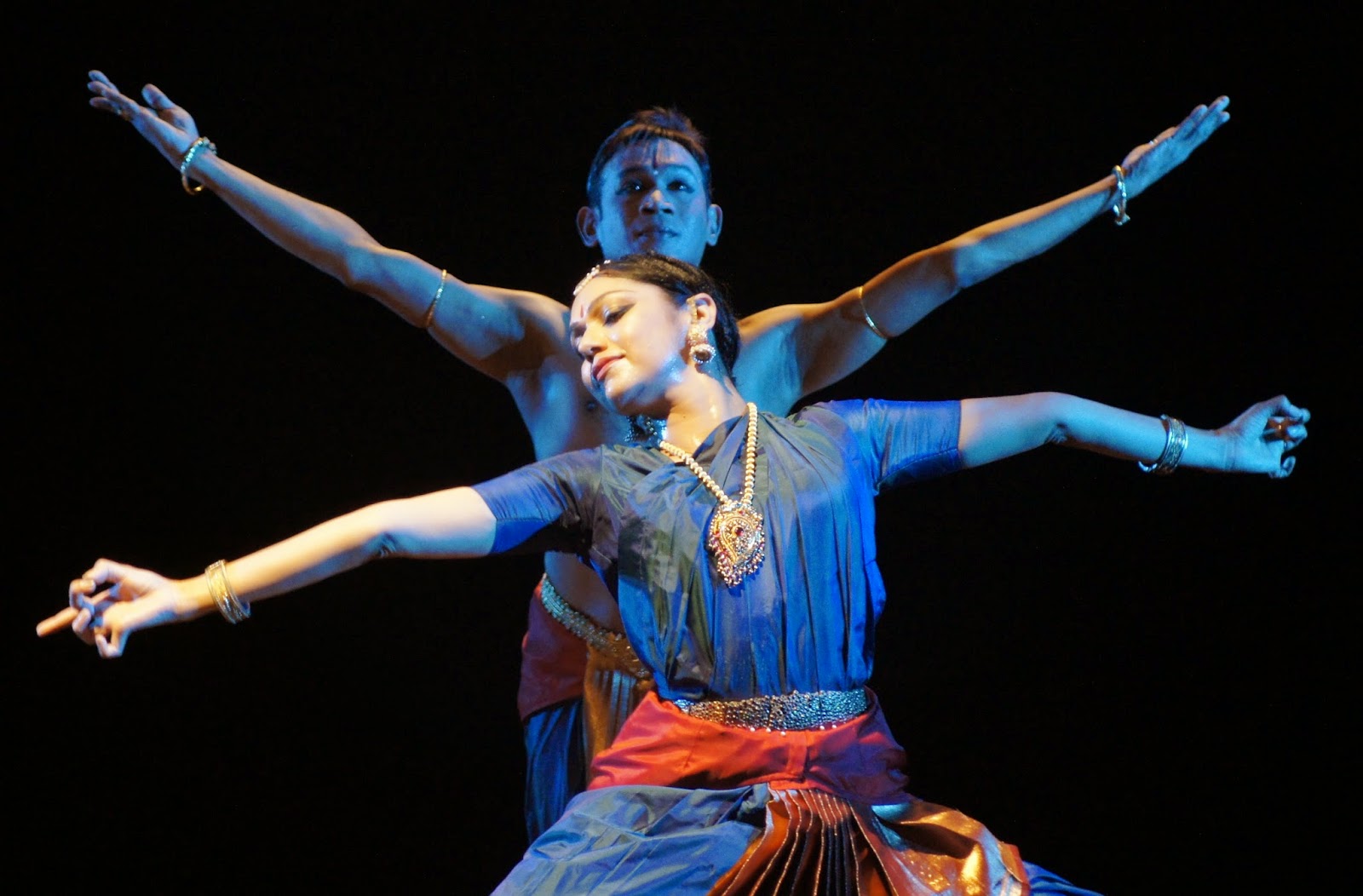 The entire production was divided into four acts. The production was about the origin of the universe and at the same time, drawing parallels with time. Kalpa is an aeon and Brahmakalpa is a day in the life of Brahma. The first piece depicted how a small speck or dot of energy expanded and exploded to form the present universe. This is what has been presented as the Big Bang Theory by modern science. Prakriti Urjaya Mahaaspotavadaha (natural energy exploded). The dancers wore red fans on their costumes for this piece. The footwork and formations were energetic and aesthetic. The music with the kanjira was catchy.  The cosmic energy manifests as the sun. Soorya Moortay Namastute (salutation to the lifegiver, Sun). The dancers did the Soorya Namaskar, a yogic exercise. Ajit depicted the Sun. The earth, which was born subsequently, is seen as the mother to all (Mata Bhoomi Putroham Prithviyaha - Earth is our mother and we her progeny). Rama depicted the earth. Again, it was the interplay of the music and dance that made the piece captivating. And then, while the sun (Ajit) moves, the earth (Rama) revolves around it while rotating on its axis. Ajit depicted the sun while Rama in a slow dance, depicted the revolutions of the earth. The sequence left an impact on the audience. 'Eta utya ushasah ketu makrat poorve rajaso bhanu manjat' (The rays of the sun at one time fill only half the globe with light while the other half remains in darkness). 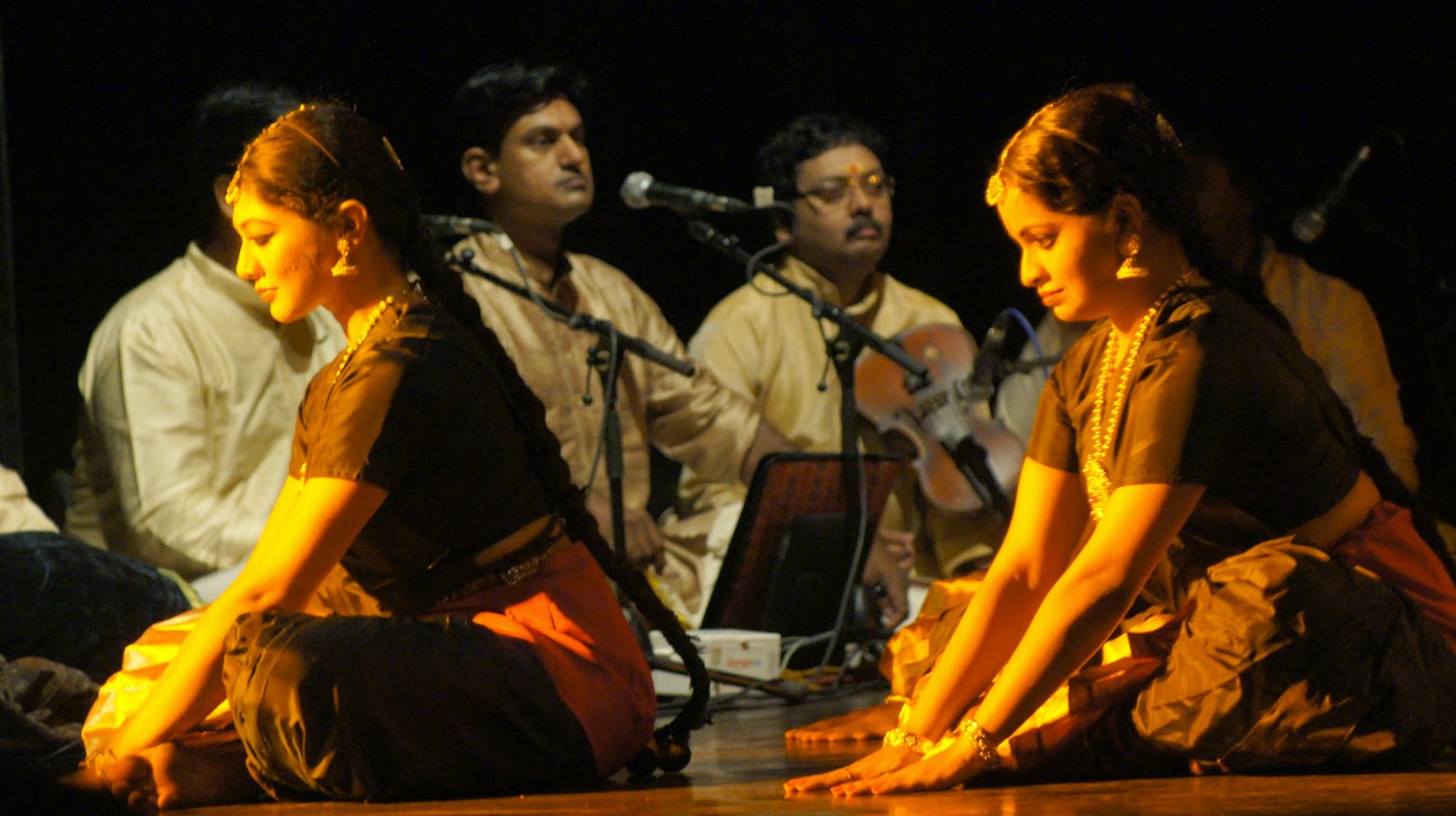 Once the srishti or the universe was created, it fell into a rhythm or pattern. Matter can neither be created nor destroyed. What takes birth has to die and then re-emerge. Day and night, good and evil and the seasons, all follow a rhythm. This is an incessant cycle of creation, preservation and dissolution. Srishti, sthiti, laya represented creation, preservation and dissolution. The trinity of Brahma, Vishnu and Mahesh are each responsible for these three processes in the universe. Brahma takes the onus of creation, Vishnu preserves and Shiva is the destroyer. The dancers did various formations to depict the three Gods. Brahmanaspateya, Bhushapateya, Prajapateya, Vakpateya Namah (this World came into existence from you) - this was a chant for Brahma. Om Namo Vishnavay Prabhavishnavay (The rhythm of the Universe is maintained by you). The group depicted the reclining posture of Vishnu on the shesha-shaiya. They showed the dashavatar of Vishnu through classic postures for each avatar. The chant for Shiva was Samasta Samharaka Tandavaya Namashivaya (The earth evolves because you dissolve to renew). They depicted Shiva with the damru and agni. The dancers depicted the creation of animals, fish, birds, rain, water, flowers, winter and summer. They wore green fans on their costumes for this piece. The high point of this piece was the vocals. Srishti, sthiti, laya were sung as a chant, taking the ‘laya’ to higher notes. 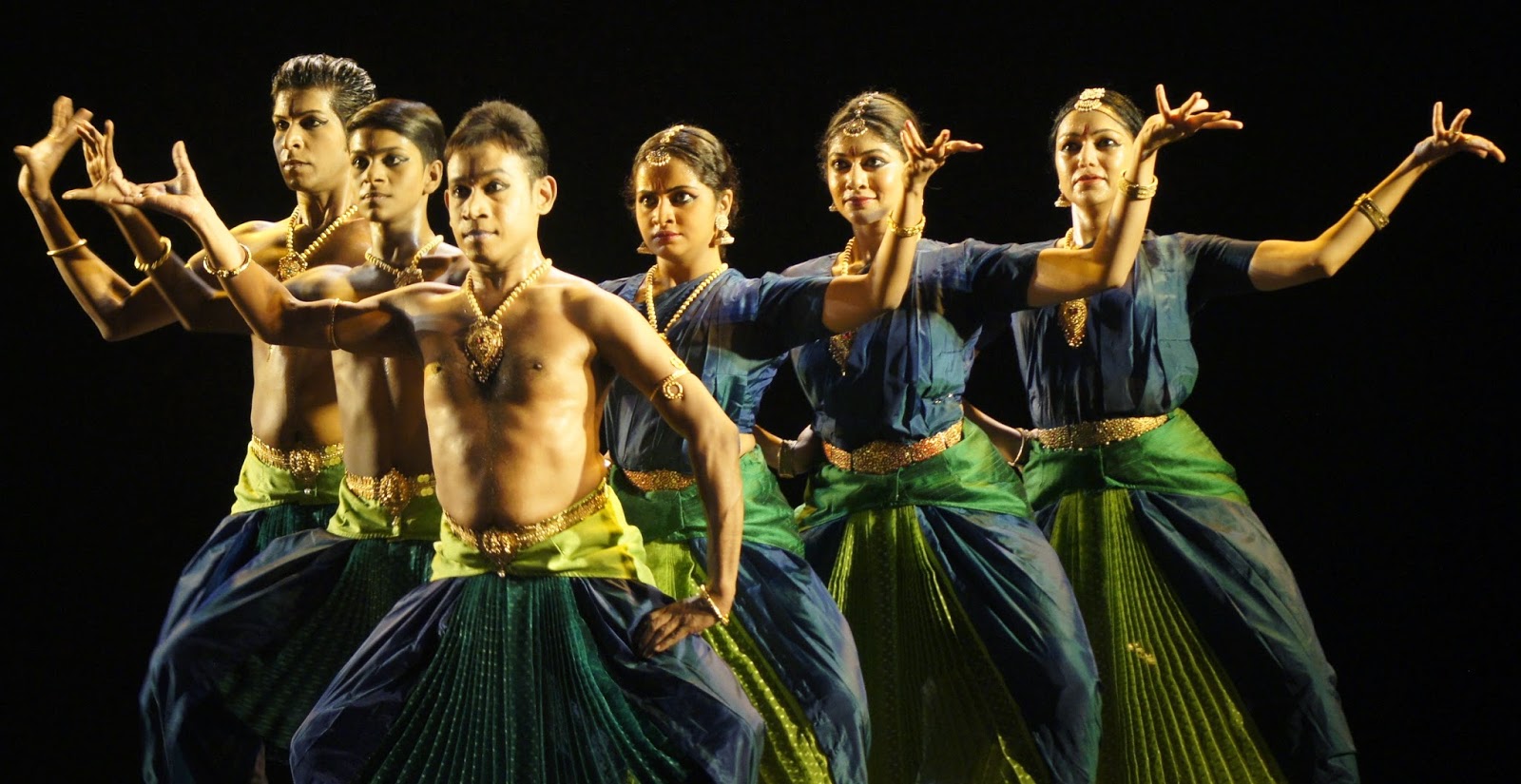 For the next section, the dancers changed into yellow and blue fans on their costumes. The human soul is a part of the Supreme, and each soul yearns to become one with the parmatma. However, the presence of the Supreme can be felt all around us in his creations - the heat within the fire, the scent in their flowers, the gem within the stone, the truth within the word, the mercy within justice, the might behind valour. In fact, without the Supreme, all creation is nothing; He is the essence of it all. So the craving for the union becomes the ultimate goal of all creation. This yearning has sometimes been seen as that between two lovers, to the extent of becoming amorous. It is sensual as well as spiritual. Rama and Ajit, in their nritya, showed the viraha or the longing. They portrayed the presence of the Omnipresent in the entire creation.

For the last piece, Footsteps of Time, the fans and the costumes were striped and colourful. ‘Kaalo ashwo vahati’ – time runs past us like a swift horse. There is no stopping or controlling of this horse-like time. ‘Kaalo kridati gachhattyaudaha’ – time plays and life ebbs. The dancers kept running across the stage, making quick entries and exits. The play of time was portrayed by each one of them performing very fast-paced nritta. The agility and energy of the piece was immense. The movement of time was essayed by the movement of hands like a clock. The performance ended with a recital of chants (Om Tat Sat Ekam Brahma /Om Eim Hrim Shrim Klim Sau Satchit Ekam Brahma).

In the final formation, one male dancer lifted the other, Dakshina did a leg spilt and Uma bent backwards. To me, it looked something like a watch, without its casing, when you see the individual parts of machinery moving uninterrupted. According to Rama, it denoted the fact that time is passing, and everybody has a different relationship with it. Each one has a different equation with it. Time is there for each one of us, and it is for each one of us to interpret it. 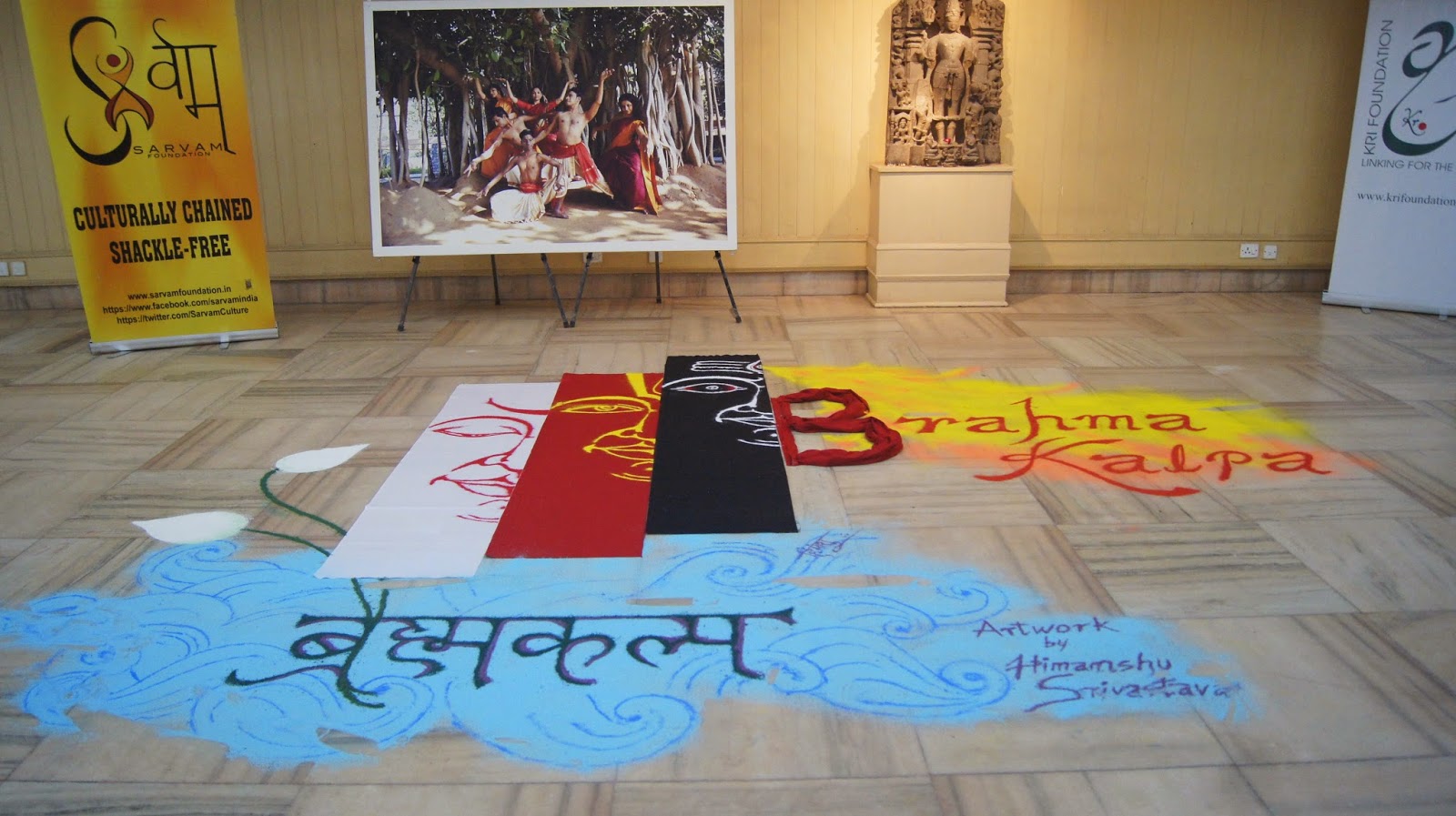 Here, I’d like to mention the rangoli in the foyer by Himanshu. It showed Brahma, Vishnu and Mahesh – white, red and black, respectively – the fire emanating at one end on the top, and clouds of space below the three faces, showing the Universe.