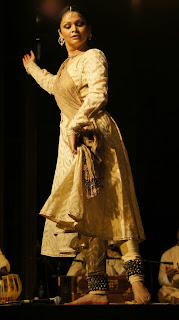 Gauri Diwakar was trained under Sumita Chowdhary in Jamshedpur. She has been further groomed by Pt. Birju Maharaj and Jai Kishan Maharaj. Presently, she is a senior member of the dance repertory of the Drishtikon Dance Foundation headed by Aditi Mangaldas, from whom she is also receiving training. She has performed extensively in India and abroad. She was awarded the Ustad Bismillah Khan Yuva Puraskar for the year 2008. She is an ‘A’ grade artist of Doordarshan and an empanelled artist of the ICCR. 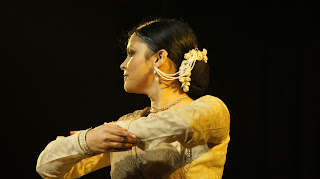 The sarod recital by Pt. Biswajit Roy Choudhary left the audience swaying to the music. Gauri took to the stage starting with vilambit, going on to some neat nritta in teen taal. She presented a gat and went on to some tukras. She did an amad and paran and ended the piece with a bandish by Gulam Sabir Khan Ek chhabili naar, muskaat jaat niharati, karat solah shringar. Gauri enacted wearing all the ornaments – necklace, bangles, earrings and head ornament with perfect technique. The next composition was Sab ban than aayi shyam pyari re. Describing Radha’s beauty, the Bindadin thumri says, chandravadani, mrignayani odhe saari malti gunthaye kesh pyare ghunghrare, maang moti savari. Meeting Krishna, they are both locked in an embrace. The abhinaya was impressive. 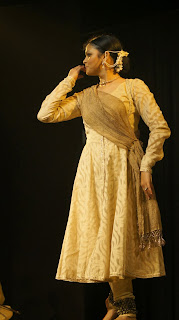 This was followed by dance in terah maatra and an extract from her previous performance Main to kar aayi piya sang rang raliyan by Gulam Sabir Khan. Her dance caught the romance and subtle eroticism of the composition, especially in the end, when she intertwined and overlapped her hands. Then she performed a bandish in teen taal - permelu, paran and footwork. The performance ended with a group nritta by Gauri’s disciples.

Her accompanying artistes were Pt Ambika Mishra on tabla, Samiullah Khan on vocals and Ustad Ayub Khan on sarangi. They provided powerful accompaniment to the dance.