Melodies of devotion by Priya Kanungo 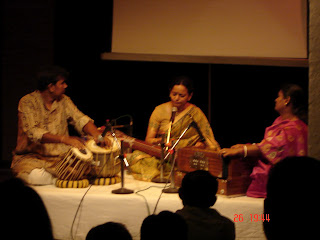 Devotional songs have been an integral part of Indian classical music, especially those sung by the saints of yore. Priya Kanungo held a concert of devotional songs at the Attic on the 25th of May 2012. The Attic is a small cozy place with rustic interiors and a very informal setting.
Priya Kanungo has trained under Pandit Amarnath of the Indore gharana and Shubha Mudgal. She has also trainer under Deepak Chatterjee and Rajan and Sajan Mishra. For the concert, she sang devotional songs originally sung by various renowned singers. About her repertoire, she said, “These bhajans I had heard, liked and had been singing over the years. Today, we have coordinated them with the video clips that we showed during the concert.” The idea was very interesting and novel.
From where I caught the performance, Priya sang a bhajan from ‘Kabir Vani’ sung by Abida Parveen. According to Priya, “Abida Parveen Sufi gaate gaate khud Sufi ho gayi hain.” Her voice is the voice of devotion (ibadat). Kabir was born in the 15th century and was raised by a Muslim family in Varanasi. Kabir has asked some very sharp questions in his verses about the material world and its attachments. The bhajan that Priya sang was a slightly altered version of the one sang by Abida. It was composed in ‘Rag Kalingara’ - ‘Man laago re yaar fakiri mein, jo such paayo Ram bhajan mein, so such nahin amiri mein’. The song expresses the detachment of the poet from the material world.
The next clip was from the 1945 movie ‘Meera’ featuring MS Subbalakshmi, looking very young and beautiful - ‘Janam janam ki dasi’ - shows surrender in Meera’s bhakti. Priya sang it with a lot of emotion and the high notes at the end came out strong and powerful.
The last bhajan was again from the movie ‘Meera’. ‘Pag ghungroo re’ embodies the defiance of the poetess. Priya rendered the refrain in various forms in her powerful and melodious voice. She handled the different modulations with a lot of ease. 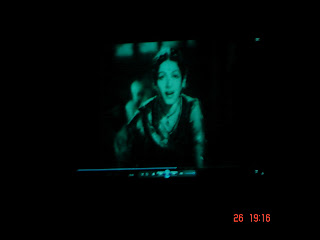 The performance was a ‘heavenly’ experience on the whole.
Email Post