On the 16th of May 2012, under the aegis of Rays of Wisdom Society, an International Ancient Arts festival was held at the Kamani auditorium. The foyer of Kamani had an exhibition of amazing paintings by Manisha Khanna. On the floor was a welcoming rangoli made of green foliage. 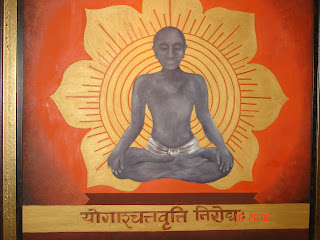 On day one, a dance was performed on the spiritual significance of Rabindranath Tagore’s poetry. The performance was titled Rabindra Abhivyakti. It was a spiritual interpretation of Tagore’s poetry. The dancers were Reela Hota (Odissi), Vidha Lal (Kathak), Naresh Kumar (creative dance), Gaudiya Nritya (Gaudiya Nritya Bharati) and Manipuri dancers (Pung Cholum and Ras Leela). 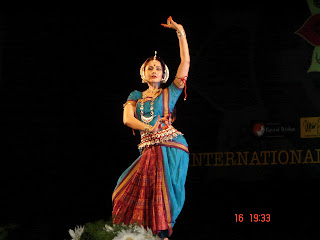 Reela Hota is a dedicated Odissi dancer. She started her training at the age of eight from Guru Gangadhar Pradhan. She was then trained by Shrimati Madhavi Mudgal and was also under the guidance of the Late Guru Keluchandra Mahapatra. She has performed extensively and has won numerous accolades for her dance.

The theme for the performance was ‘Spiritual significance of Rabindranath Tagore’s poems’. Reela, when asked to comment on the theme, said, “Spirituality, as my guru taught me to see it, is a way of life, not anything that is superimposed. It’s the way we handle ourselves and react to situations. Spirituality gives us a kind of energy or aura which I feel whenever I visit my Guru’s ashram. It is not only the Indian culture which is ancient and evolved and lends itself to spirituality. In my experience, there are other cultures as well, like the African, Chinese and parts of Europe and what we call the US, which have evolved their values as a part of their daily lives. It has been researched that students who listen to Mozart’s music develop a better IQ. There has been extensive research on this subject since the 70s. Art was initially a part of life and not a performing art. Its influence was seen on every aspect of life and subconsciously, this knowledge provokes an urgency to go back to our roots. So, personally, I have loved performing to this subject.” 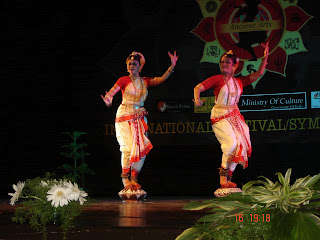 The performance began with a saraswati vandana by Reela. The various attributes of the Goddess Padmanakshi, padmavakraye, mahabalaye, mahabhujaye were portrayed beautifully by Reela with sharp hand and feet movements. The purpose of the performance was to give a new dimension to the poems. The poems presented the truth behind the spiritual evolution of an individual on this earth. Every soul is destined to merge with the creator following varied paths. The nada yogis follow the subtle sounds of musical instruments which they hear during the nada yoga which is depicted in Tagore’s poem Tomar. The Odissi dancers danced with a lot of grace and did some difficult steps on inverted earthen pots. 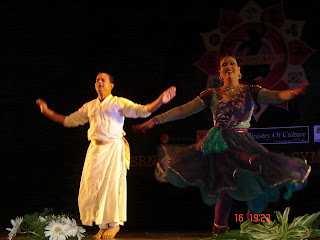 The second poem ‘Due pakhi’, was done by Vidha Lal in Kathak with Naresh Kumar, a creative dancer. Here, the poet gives an insight into the human mind; the higher spiritual mind which is constantly urging the lower material mind to let go of its bondage and soar upwards. This eternal tussle between the two minds is depicted beautifully by Tagore through a dialogue between a caged bird and a free bird. The music was scintillating with the sounds of birds. Vidha Lal did an amazing portrayal of the free bird and Naresh Kumar of the caged bird. The ‘bhavas’ of both the dancers were touching and they conveyed a lot through the language of dance.

The next piece was a poem ‘ nirjhare swapna bhanga’. It narrates the experience and emotions of a soul on awakening. Water trapped in a cave is let loose and becomes aware of its destination. It is enraged at being imprisoned, breaks its barriers and awaits its impending freedom. ‘Kundalini’, the dormant energy undergoes the same experience, when awakened. Reela Hota did it in Odissi with lot of ‘mukhabhinaya’. 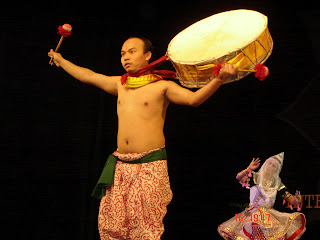 Following this was ‘Rath Yatra’, which went on to reflect ‘upanishadic’ philosophy, that man and God are one and it is ego that prevents us from reaching a higher state of evolution. The ‘Gaudiya’ dancers danced with pace and agility. The swirling and jumping of the drummers was mesmerizing. Reela did the swaying moves of Lord Jagannath on the ‘Rath’. Finally through ‘Sundara’, the concluding poem, Tagore depicts the blissful state and emotions of an individual after attaining the ultimate transcendental state. Vidha Lal did this piece in Kathak and her dance moves, costume and pace really left the audience awestruck. Finally all the dancers took the stage together. 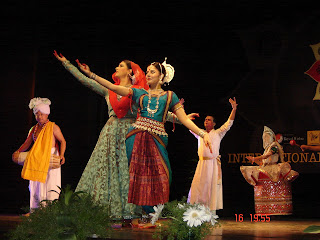