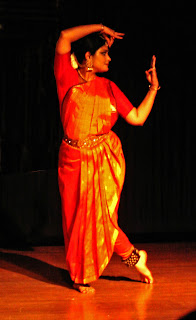 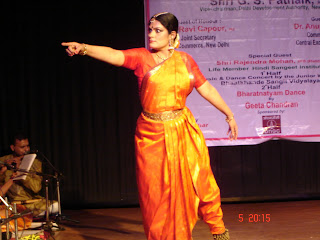 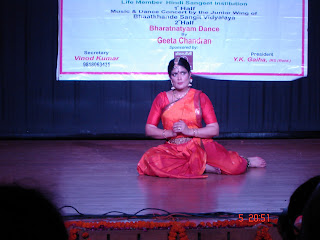 Geeta Chandran is a doyen of Bharatnatyam dance in India. Bharatnatyam stands for ‘bhav’, ‘raag’, and ‘taal’, and Geeta personifies all three. She has been awarded numerous national and international awards, including the ‘Padmashri’.
Geeta recently performed at The Bhatkhande Music festival at Alliance Francoise Auditorium on the evening of
December 5th.

The evening began with ‘Ganpati Vandana’ sung by Sudha Raghuraman. The first piece was ‘Pushpanjali’, which was to worship and sanctify the stage. This was followed by ‘Amba-Shambhavi’, which was an invocation of ‘Maa Durga’. ‘Shakti’ is the epitome of beauty, kindness and benevolence because she is the mother of the universe. On the other hand, she vanquishes evil from the face of the earth. For that, she takes on an angry incarnation. ‘Amba, ‘Shambhavi’, ‘Chandramouli’, ‘Uma’, ‘Parvati’, ‘Kali’, ‘Hemvati’, ‘Shiva’, ‘Katyayani’, ‘Navyauvani’, ‘Shubhkari’, ‘Lakshmi’, ‘Bhadrakali’, ‘Jwalamukhi’, ‘Vaishnavi’, ‘Chamunda’, ‘Bhagwati’, ‘Rajrajeshwari’ – this ‘stuti’ portrayed the various avatars of the goddess, sometimes showering her love as a mother, at other times portraying the stateliness of ‘Rajrajeshwari’, and sometimes the anger of ‘Chamunda’. Geetachanged her facial expressions, the expressions of her eyes and ‘bhangimas’ to represent the various aspects of each avatar.

Geeta pointed out that there has been a lot of give and take between Hindustani and Carnatic music. Her upbringing in north India has made her familiar with the north Indian poets. Her next composition was an ‘abhinaya’ on the Meera bhajan ‘Sham mohe chakar rakho ji’. She said that this ‘bhajan’ had the flavour of Meera’s ‘bhakti and ‘unmaad’. It is a plea to your Lord to keep you as a servant and then the feeling of final union with him, which is indescribable. Geeta moved with that ecstasy in her dance. She said that dance transcends the barrier of language. Whether it is the poetry of the Tamil scholars or the verses of Hindi poets, the translation into the universal language of dance is an exhilarating experience.

The next composition had its roots in Banaras, in the ‘Panchakshar Mantra’, which embodies Lord Shiva. He is the Lord of procreation and destruction. He is also the Lord of dance and is worshipped as the ‘Nagendra-haraye’, ‘Trilochanaya’, ‘Maheshwaraya’, ‘Digambaraya’, ‘Nandeeshwaraya’, ‘Neelkanthaya’, ‘Jatadharaya’, ‘Gangadharaya’. He is known by his various attributes. The magnificence of Lord Shiva was portrayed by Geeta in her stances and expressions. It is customary to believe that the person impersonating the Lord comes to embody Him. The sparkle in Geeta’s eyes that evening truly did have a divine grace.

‘Padmajavali’ is a narrative of ‘bhav’. The next piece was based on poetry by Surdas, ‘Suni sut kaho pyari’. Lord Krishna is refusing to sleep and Maa Yashoda is desperately trying to put him to sleep by telling him the story of ‘Ramayana’. Geeta chose this composition for the performance because the audience and the stage were small and that would make it a more intimate experience. The performance involves ‘bhav nritya’ while sitting down and that would have lost its impact in a larger space. The narrative covers the various aspects of Lord Rama’s life from his birth in Ayodhya, ‘dhanush bhanjan’ in Janakpur, his vivah to Sita, exile to the forest, Bharat milap, the killing of the kanak mrig and the kidnapping of Sita. It is at this moment that the almost asleep Krishna leaps up and asks Lakshman to hand him his bow and arrow. He exhibits the ‘aavesh’ of Lord Rama and Maa Yashoda is left spellbound. She cuddles her son and puts him to sleep. ‘Bhav Nritya’ is very difficult to perform because it requires just the right kind of emotions and expressions, butGeeta did it flawlessly.

The final piece was an ode to Lord Krishna, he who is ‘Radharamana’, ‘Vanamali’, ‘Vasudev’, ‘Jagmohan’, ‘Shashivadana’ and ‘Sarsijnayana’. Geeta said that the mood of the performance was a continuation of the previous day’s dance in ‘Vrindavan’, where she danced in a temple, only for the Lord, and her last performance of the evening was her final offering to her Lord.