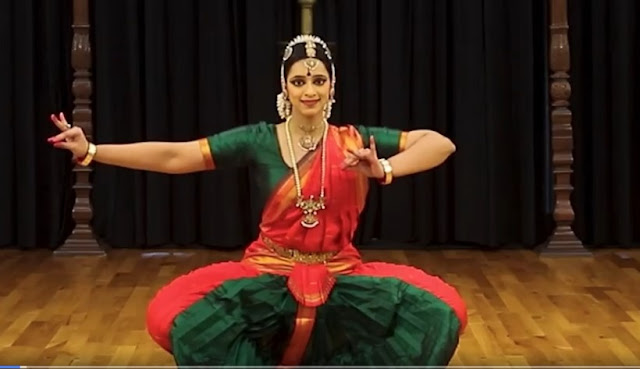 Radhika Kathal is a Bharatanatyam dancer training under Guru Geeta Chandran and a Hindustani classical vocalist training under Dr. Soma Singh. She is one of the senior members of the Natya Vriksha dance company. Her talent has been honed and polished in the over 15 years of her tutelage under Geeta ji. She performed online in a virtual event for Navapallava in January this year. The Navapallava initiative is intended to stop the exploitative practice of ‘pay to perform’. She wore a red and a green costume for the first two pieces. The first piece was a mallari in ragam Natai, ata talam. The choreography and nattuvangam were by Geeta ji, vocals and music by Sudha Raghuraman, mridangam by R. Sriganesh, flute by G. Raghuraman and violin by C.S. Anuroop. The presiding deity is taken out in a procession in a palki around the temple. Radhika began with one leg stretched behind her in pranam mudra. Her hastas and footwork for the nritta were neat and she moved effortlessly on the stage. 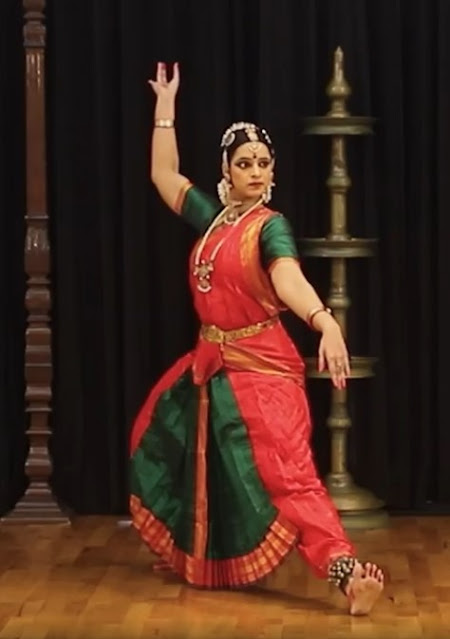 The next piece was ‘Bho Shambho’, an ode to Lord Nataraja, written by Swami Dayanand Saraswati. The choreography and nattuvangam were by Geeta ji, vocals and music by Sudha Raghuraman, mridangam by R. Sriganesh and flute by G. Raghuraman. The piece describes and depicts the various aspects of Shiva. He has the matted locks, through which flows the Ganga. He is infinite and is always dancing. He rules the stage. ‘Bho shambho’ was in ragam Revati, talam adi. Radhika began the performance in a squat in dhyan mudra. She took the stances for Shiva in perfect balance and assumed a different posture and gestures each time: the damru movements, pinakinae, shashishekhara, trishool dharine, ambika nathaye, ganga dharaye, saam priyae, sada shivayae. Shiva and his consort Ambika were depicted as the eternal couple. Radhika did the hastas for the shivalinga. Further, she depicted his karuna for his bhaktas – karunakaraye, bhavasagar taraye, nirgun parbrahm, nitant ananta. She concluded his attributes with matang munivar vandit, sarv digambar vesh, suresha, taking postures and an impressive movement in a squat with hastas for damru. She concluded the piece with the dhyana mudra in squat and then the kundalini rising to the sahasrara chakra and the snake moving back and forth in the chakra. The piece displayed her expertise in nritya. 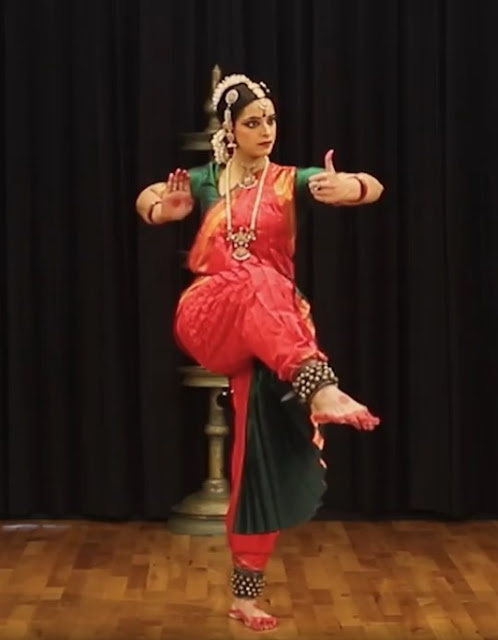 The concluding piece was a thillana in raag Yamunakalyani, taal mishrachapu. The composition was by Lalgudi G. Jayaraman, with rhythmic inputs by the late Karaikudi Sivakumar and choreography by Geeta ji. Nattuvangam for this piece was by Sharanya Chandran, vocals and music by K. Venkateshwaran, mridangam by M.V. Chandershekar and flute by Rajat Prasanna. Her costume for the piece was red and yellow. The thillana was executed with impressive technical prowess, with neat footwork, clean and complete movements, graceful hastas, leg lifts, and backwards, forwards and sideways movements that covered the stage. It was an ode to Gopal Krishna with lakuti, with the bhakta watching him in admiration and awe. You can watch the entire presentation, including the second performer in this double bill event, Kathak dancer Manaswini Sharma, here. 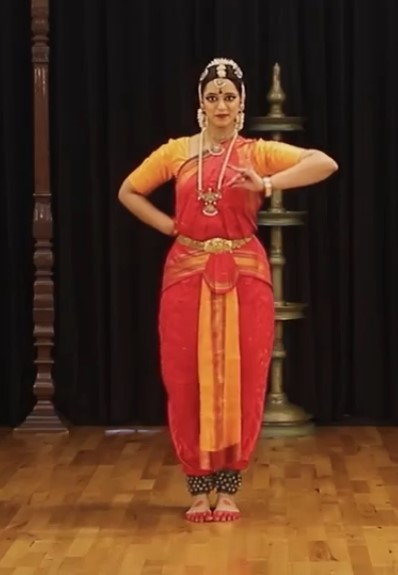