Powerful depiction of feminist anger through Draupadi by Vidhya Subramanian

I have recently reported the performance of Shoorpanakha – The Story Only She Nose by Dakshina Vaidyanathan Baghel (link) at the Madhavi festival organized by Rama Vaidyanathan and Kri Foundation. The second performance that same evening at the Stein Auditorium was by Vidhya Subramanian. Vidhya is a well-known performer and teacher of Bharatnatyam who has been trained in the Vazhuvoor bani by Guru S.K. Rajarathnam and abhinaya exponent Smt. Kalanidhi Narayanan. She has a Masters in theatre arts and also works in the fields of theatre and film.

This performance was again an outstanding example of how nritta, nritya and abhinaya are very carefully strung together to unlock the natya element in dance. It was called a ‘dance theatre work’ since it used arts like Bharatnatyam, spoken word or poetry and expression to tell the story of ‘Draupadi: Still I Rise’. The presentation was a first person perspective of the events of her life.

The story has been narrated in the past, but was brought forward into a contemporary context by the issue raised in a very dramatic manner. Draupadi, as we know, was the daughter of Drupad and the wife of the Pandavas. But she was the sakhi of Lord Krishna and a dear bhakta. And as I have heard, the Kali in the Mahabharat yudh.

For this production, the concept and choreography were by Vidhya, music composition by Rajkumar Bharati, script by Priya Das, Vidhya and Shikha Saklani Malaviya, sound and music production by Sai Shravanam and Resound India, vocals by Savita Narasimha, Srikanth Gopalakrishnan and Rajkumar Bharati, mridangam by Karthikeyan Ramanathan, violin by Embar Kannan, percussion by Ganapathi Venkatasubramanian, sitar by Kishore Kumar, flute by Vishnu Vijay, keyboard by Navneeth and voiceovers by P.C. Ramakrishna.

As I report the acts of the production, I would like to mention the constant use of the element of fire in this story and how remarkably it was used at different stages. Vidhya’s poise and expressions were perfectly suited to enact the character of a brave woman like Draupadi. 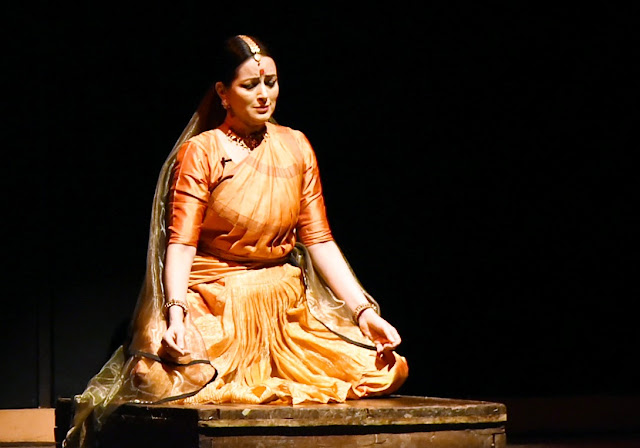 Act I: Ashes. Language: Hindi, lyrics: Priya Das. Here, Draupadi mourns the death of her young sons. Vidhya started by kneeling and writhing in pain. As she rubs her head on the floor, her bindi gets smudged. As the music and the mournful aalap begins, she embraces the ashes of her five warrior sons – ‘Tumhari niyati badal sakti, rah ka mod seedha kar sakti.’ As she grieves and agonizes, she imagines herself rocking her sons. Puts kajal in their eyes. Imagines playing with them and feeding them. Follows their smiles. As she comes to the present, she aches again and sees ash in front of her. As she picks it up, pangs of revenge and anger course through her – ‘Kaleja cheer doongi, aah niklagi.’ This was a very powerful act by Vidhya with stirring abhinaya, great music to suit the mood, and the vocals with that heart-wrenching aalap. 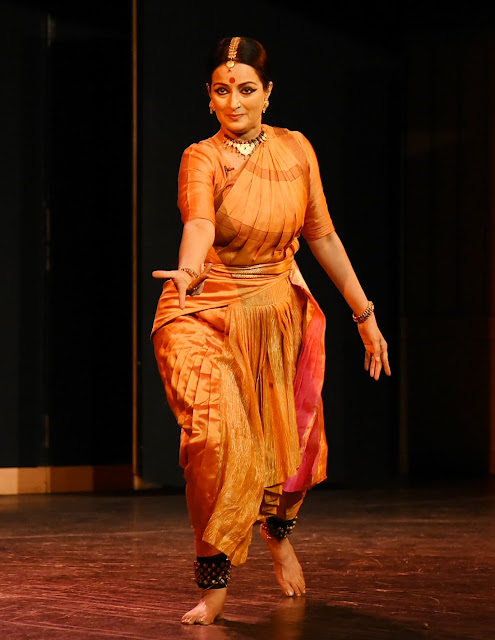 Act II: Luminance. Language: Tamizh, lyrics: Priya Das, translation: Prof. Raghuraman. In the second act, Draupadi reminisces about her birth. She is a luminescence that emerged from the fire. Vidhya employed the expressions and gestures for agni and her eyes, especially, were very evocative. Draupadi has been described as very beautiful and she binds the seven chakras in the body. If the Pandavas are the five senses, she is the sixth one. 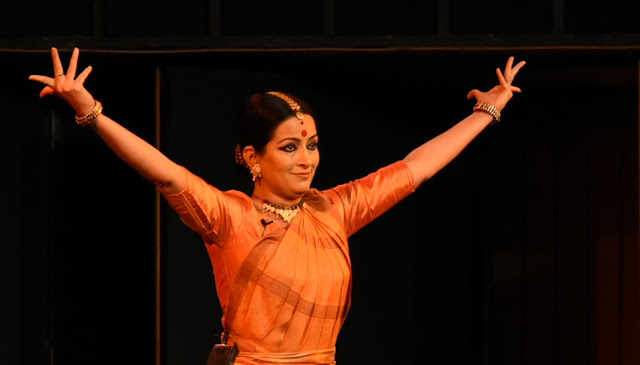 In the next scene, Draupadi is shown addressing Gandhari, the mother of the Kauravas. Draupadi, in her rage, tells Gandhari that she chose to be blind on the fateful day when Draupadi was disrobed and now, she suffers as her hundred sons are dead. Gandhari had sworn to cover her eyes to come to terms with her husband being blind. That flame in Gandhari’s eyes had settled within her as she chose to live in the dark. And it burned her sons as well, who committed the horrific act. Vidhya’s eyes expressed a lot. 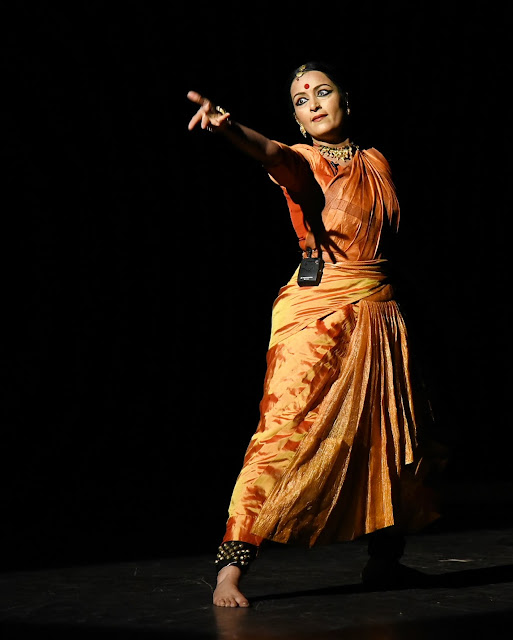 Act III: Kindling. Language: Bengali, lyrics: Rajib Das and Swagato Basumallick. The fire that was born had to be kindled. The scene is about the swayamvara of Draupadi. Karna is barred from taking the challenge since his lineage is questionable. That was an important instance in the making of the war. 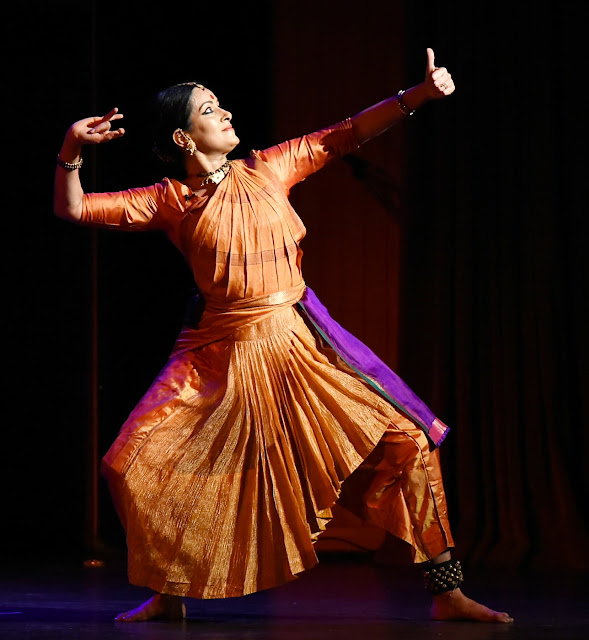 And then Arjun, in disguise, shoots the eye of the fish, and she is married to him; yet, she has her doubts. Vidhya portrayed the swayamvara scene and Arjun taking the stance for the shot at the eye of the fish using its reflection in water. 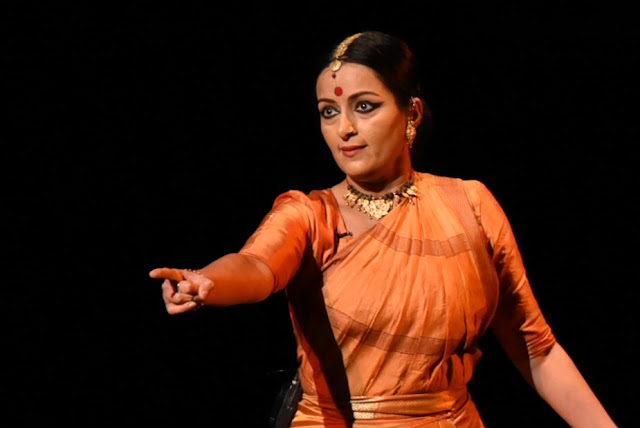 She is uncertain and yet walks towards him since her sakha Krishna had told her to do so. She reminisces about her marriage and how she was a dulhan with the sounds of shehnai echoing all around, the mangalsutra tied around her neck. Arjun was a veer purush but he did not have the right to divide her among five brothers. The pressures and ambiguities in the life of a woman in the society of those times were highlighted  by Vidhya. 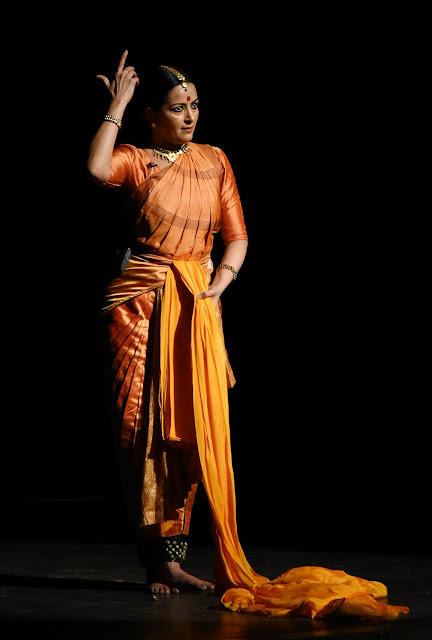 Act IV: Combustion. Language: Tamizh, lyrics: Subramania Bharathi. The fire that had been kindled is now a raging flame. An enraged Draupadi questions all her husbands. Was she just a minor pawn in this game of dice? Her revenge will be complete only when she bathes her hair in Duhshasana’s blood. The fire inside her burns with vigour. 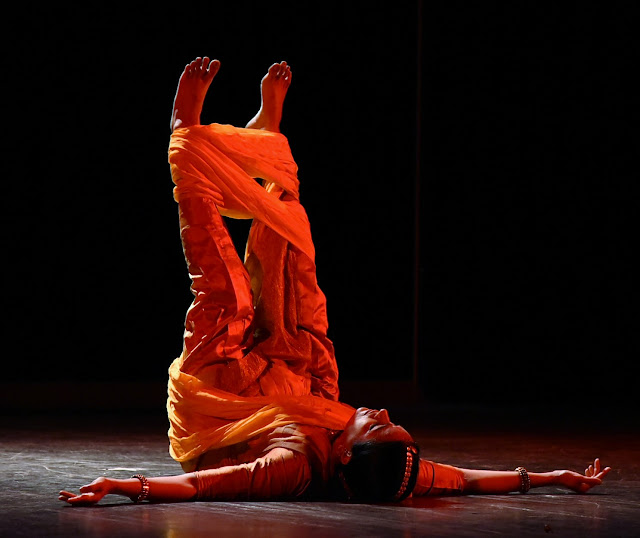 The scene starts with Vidhya lying on the floor in a foetal position, a saree tied around her legs. She gradually raises her legs and wriggles to get her legs free from the grip of her saree. Here, it is a different perspective of the saree since it is not worn on her body, the one that Duhshasana is trying to pull off, but a binding trap that has kept her prisoner for generations. As her hands and feet tremble, Draupadi makes a desperate attempt to free herself. 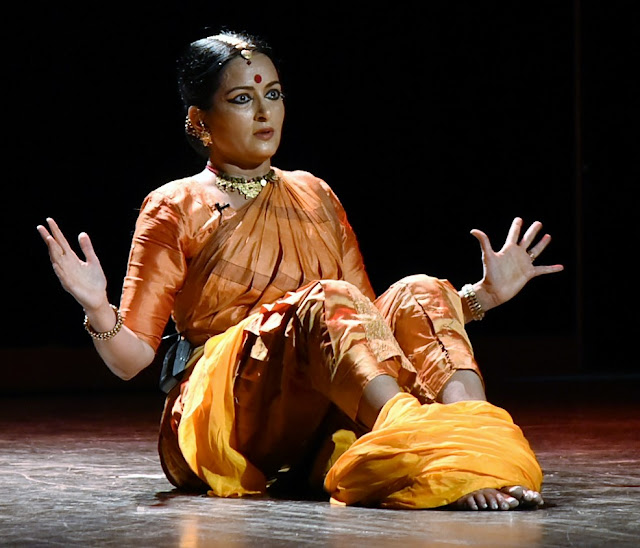 The music in the background made a sound like the staccato banging. It was a visceral depiction of rape, and made an impact that chilled the viewer. She trembles for a while and then starts going limp, symbolizing a state of despondency. She sways and turns as she tires. The scene ends with her pledge of bathing her hair with the blood of her violator. Vidhya’s abhinaya was very moving as she expressed rage on one hand and had tears welling in her eyes on the other. I think the act of tying the saree on her feet, which are turned upwards, had the desired impact on the audience.  Vidhya used a bit of speech as well when she was questioning Yudhishthira and at a few other places, but sadly, most of it was too soft to be heard over the music. 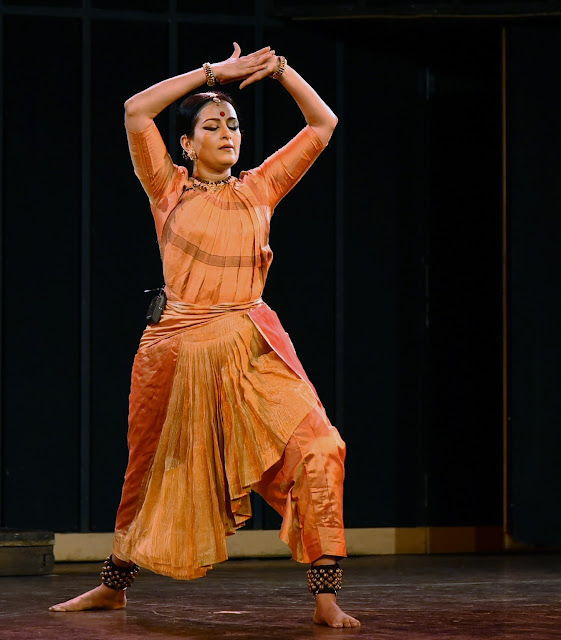 Act V: Carnage. Language: Kannada, lyrics: Kumara Vyasa. Duhshasana’s body was split into two, the blood from his thigh was collected and poured on her hair. The fire that had raged would cause destruction. Bhima pulls the dagger out, slashes Duhshasana and draws blood, bathing her in it. She braids her hair, ties it up with his intestines like a beni and with a smirk on her face, she puts a tilak on her forehead. This episode provided the vibhatsa rasa or gore to the scene. The visual explicitness could have been toned down a little since it might hurt some sensibilities. But what is not to be forgotten is that Draupadi is an incarnation of Shakti, who destroys all evil.

Act VI: Incandescence. Language: English, author: Shikha Saklani Malaviya. Every flame has an incandescence. This scene by Vidhya is a conversation between Draupadi, Sita and Radha. Though the conversation never actually happens, it’s a different perspective by Vidhya on three women from mythology who have had to suffer at the hands of their men. Draupadi tells them about the carnage of the war. Radha did not have to marry and so did not have five husbands and a mother-in-law who would ask her to be shared by five men. For Sita, she says that it was Rama who missed the opportunity to see the birth of his sons and watch them growing up. It was actually his loss and not Sita’s. 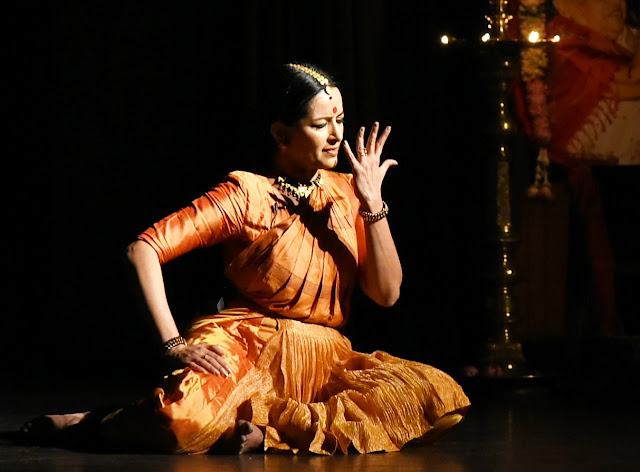 Act VII: Uprising. Language: Hindi and English, lyrics: Pushyamitra Upadhyay and Maya Angelou. This flame is just the tip of the awareness of the times to come. Draupadi was appalled because her husbands and her elders stood like statues when she was being insulted. She is further aggrieved by the fact that the world still hasn’t changed much. Vidhya stands on a pedestal, recites the poem ‘Still I Rise’. And her war cry-like song, ‘Utho Draupadi shastra utha lo, Madhav ab na aayenge’ is to motivate each woman to stand in her own defence as she relates it to the present state of women in India, where Draupadi cannot be forgotten since around every corner stands a Nirbhaya. And the truth of this statement chills you to the core.

This performance was commendable because of the abhinaya skills of the dancer. Though the story of Draupadi has been visited many times, it was the dancer’s different perspectives that gave it an edge. The interspersed nritta portions were in jatis that complemented the story.

Afterwards, I spoke to Vidhya about the production.

Q: How did you choreograph the jatis?
A: In a production, every moment and movement has to culminate in telling that story. In a production, there is a narrative, there is a thread. The narrative is the most important. Every single moment, every single jati… in fact, I don’t see them as jatis and sahityam, it has to become a seamless thread or a garland with different flowers and fragrances.

Q: Have you ever had to deviate from your form?
A: No, not at all. The footwork is there and it is organic. If the story requires a communication of power, it is there and if it does not, then it is softer or not there at all. 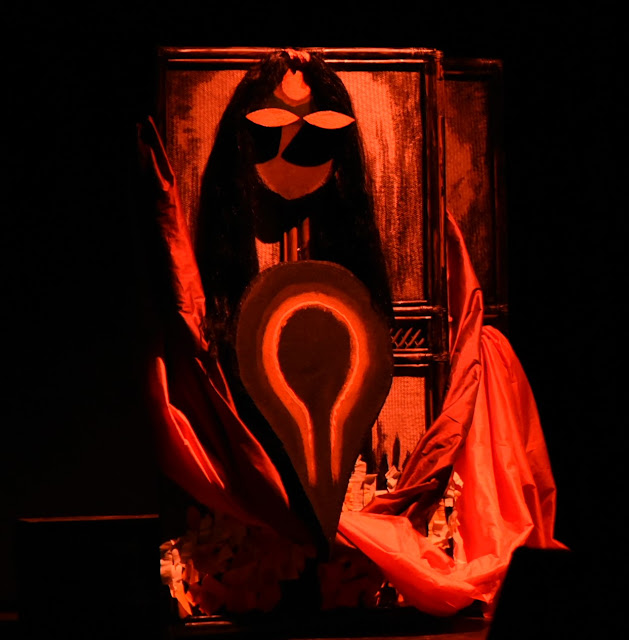 Himanshu's installation on the stage for Draupadi had a dark face with a very bold red bindi, drooping eyes and a yoni, the universal sign of femininity. Speaking about his installations, Himanshu said, "I had to keep my installations close to the choreography without giving out the essence of the choreography, and yet, take a stand of its own about the character shown in the production. That was the challenge. If the first character had shown how she changed the course of the Ramayana, the second was a character who still changes everything in everyday life. The yoni was used as a symbol of universal femininity. The saris draped on the installation played an important role since I like to play with fabric. The nine yards have a universal appeal." For Shoorpanakha, he draped the installation in a dark, coarse sari, but for Draupadi, he used a yellow silk sari.