I have put up a post recently about Abhimanyu Vadh, performed by Vanashree Rao as part of the three-day programme celebrating Birju Maharaj’s 80th birthday earlier this year. Some of the other performances I watched are detailed below: 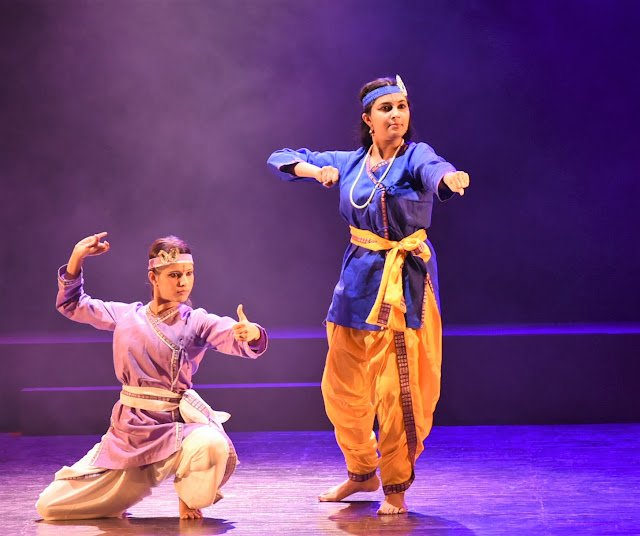 The three-day event had, naturally, a plethora of Kathak performances. On the first day, the last performance of the evening was by the disciples of Munna Shukla. The composition was by Pandit Jasraj in praise of Lord Vishnu, ‘Om Namo Bhagavate Vasudevaya Namah’. The performance began with the canto for the guru, ‘Dhyanamoolam gurumurti, poojamoolam gurupadam, mantramoolam guruvakyam, mokshamoolam gurukripa’. The two dancers also depicted the various aspects of Krishna’s leela and various episodes from his life – ‘Govindam gokulanandam gopalam gopivallabham govardhan dharan peetambaram padmanabham purushottamam’. 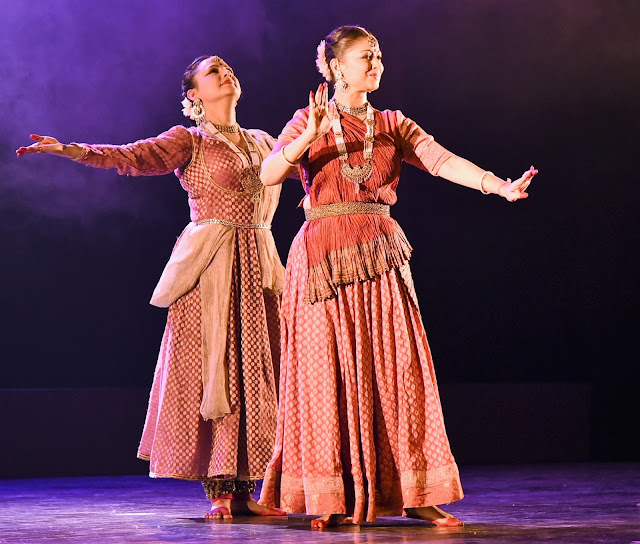 The liberation of Gajendra from the jaws of the crocodile, Krishna eating mud, Yashoda scolding him, and when he opened his mouth, his showing her the entire universe in it, Kaliyadaman, Vamanavatar – all these leelas were depicted through bhaav. The Ramavatar was shown with his killing of the dashmukh in battle. And finally, the peacock dance with Krishna. A very gentle and soft rendition, but I found the mismatched outfits, and sometimes even the mismatched nritta, disconcerting. They ended with geetopdesh and vishwaroopam.


On the third day, Dr. Sonal Mansingh was honoured with an award by Maharajji. I was not such a believer in genes carrying ability and talent running in the blood down the generations. I thought it was more about the conditioning and environment, but here, you got to see generation after generation of Maharajji’s kin performing Kathak as if it were their legacy.


The first performance was by Yashasvini, the younger daughter of Deepak Maharaj. She presented a bandish by Pt Rajan Sajan Mishra, ‘Laadli Radha’. This little girl presenting nritta, footwork, and covering the stage very confidently with tode and tukde, doing the abhinaya of Radha, playing with the birds, swinging on the jhoola, dancing with peacocks, chhed-chhad with Kanha, looked every bit like Radha. Her last stance, sitting down and holding her chin up, won the heart of the audience. The vocals were by Swaransh Mishra, Maharajji’s grandson and Pt Sajan Mishra’s son, following in his father’s footsteps as the sixth generation of the Banaras gharana. On the tabla was another scion, Pranshu Chatur Lal, while the sitar was by Chandrachud Bhattacharya, and padhant by Yashasvini’s older sister, Ragini Maharaj.


Ragini was the next performer. Her piece was also based on a composition by Swaransh, who also sang it. Meera’s iktara cannot bear her pain, said the song. It becomes Krishna and visits Meera to relieve her suffering. Ragini was able to portray the wait and the viraha of Meera with good bhaav, with some interludes of nritta, including some tode and tukde. The composition was very lyrical and sung melodiously.


Shinjini took the stage next. She is the daughter of Anita Kulkarni, and Maharajji’s granddaughter. The piece was called Dhara, and was based on a poem by Lord Tennyson called ‘The Brook’. It was a translation by Maharajji in teen taal. The piece was a narration on the life of a river, and Shinjini wore a blue costume for it. The river goes on forever. The performance began with the tapping of feet and the sounds of  jharna or a trickle of water. The wind blows on the hills. The river flows down scared – darpaaye, ghabaraaye. It reaches the strange shores of the planes. ‘Kal kal karti behti dhara’ – it flows with leaps towards its sea, ‘sagar ne haath badhaya’. This had interludes of nritta, footwork, tode and tihais. The abhinaya was very expressive. She held the blue drapes behind her to depict the finality of this journey. A very good concept.


Tribhuvan Maharaj had an interesting concept to his performance. The gopis are like the 16 matras of teen taal. They move and reach their destiny in sam, which is Krishna. The path of the gopis was shown by paran, tode, kram laya, tihai, bandish, jugalbandi  and footwork. It had very clean nritta.


Ipshita was the next dancer, doing a guru vandana dedicated to her guru, ‘Akhand mandalakaram'.Then she danced a thumri by Maharajji, ‘Jhamak jham aayi badariya’, using tihais and gat.


Mamta Maharaj, Maharajji’s daughter, did a natya nritya on Gandhari, who repents the derobing of Draupadi by her sons, followed by nritta. There were many more performances by Maharajji’s family members lined up, but it was already quite late in the evening and I could not stay to watch them all. Undoubtedly, though, watching the entire parivaar displaying their talent was awe-inspiring, and showed the full impact and scope of the Maharajs family tradition of Kathak, and especially of Birju Maharaj.