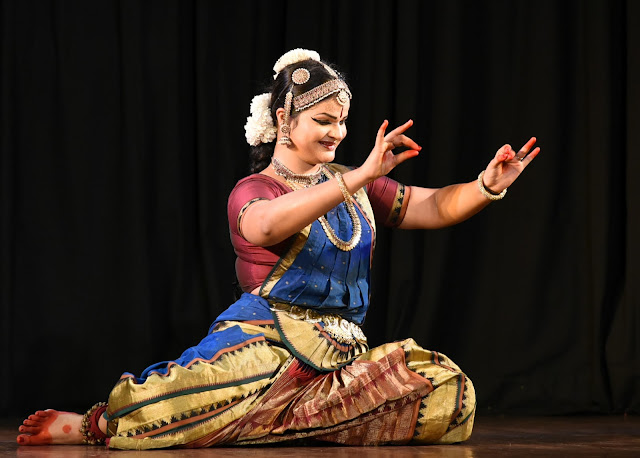 Young Bharatnatyam dancer Gayathri Rajaji from Chennai performed at the IIC in Delhi on the 16th of May. It was a margam performance. The striking blue saree of her aharyam stood out as it reflected the light. 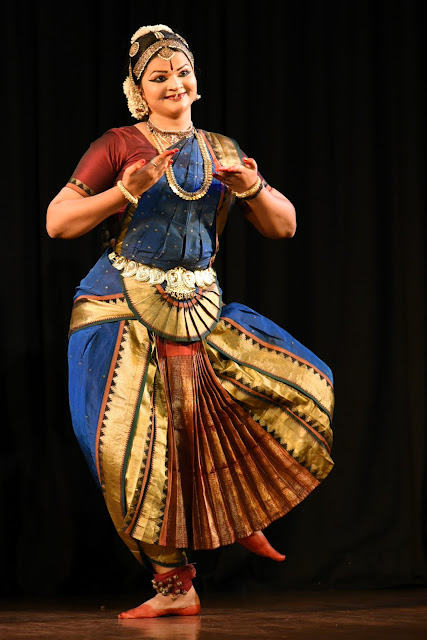 The first piece was a Stuti Pancharatnam, an ode to Ganesha, Shanmuga, Shiva, Amba and Krishna. The second item, a varnam, was in raag Khamas, roopak talam, choreographed by Adyar K Lakshman, a musical composition of Subbrama Dikshitar. The nayika addresses Lord Thyagesha, or Lord Thyagaraja. She is pining for his love, saying that her suffering is unbearable, so he should come to her. The flowers are blossoming, and the birds are pairing. She picks flowers, chooses the best ones, and waits for him. She is attracted to him like the deer is attracted to the scent of kasturi. His eyes are like the lotus, with the fiery third eye, she says as she is struck by the heat of love. She asks for his embrace and union. In the varnam, Gayathri depicted a dice game between Shiva and Parvati. Goddess Parvati wins and is proud of it. The lord breaks her pride by showing his majestic look to her – the moon on his head and the snakes, the tiger skin. The nayika asks, why wouldn’t you give me a glimpse of that look? The abhinaya by Gayathri for the dice game was done with a lot of sensitivity. The nritta portion had a lot of good footwork and hastas, and certain steps and leaps had a novelty about them. 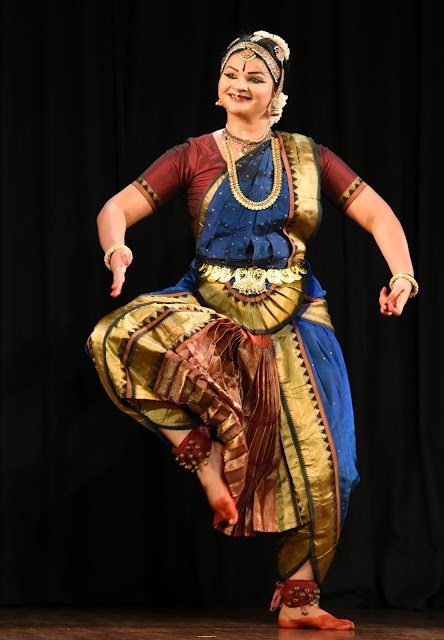 The third piece was a padam about Subramania Swami or Shanmuga, a composition of Kavi Kunjara Bharati, with choreography by Smt.Nithyakalyani Vaidyanathan. The padam is about the khandita nayika. Lord Shanmuga has been unfaithful and been to the other woman. The nayika tells him that he cannot contain his wandering mind and has lost it all. He is bewitched by the other woman. She says people are gossiping and she is embarrassed. The padam required Gayathri to emote a lot with her eyes, and she pulled it off well. It was in raag Kalyani, taal mishra chapu. 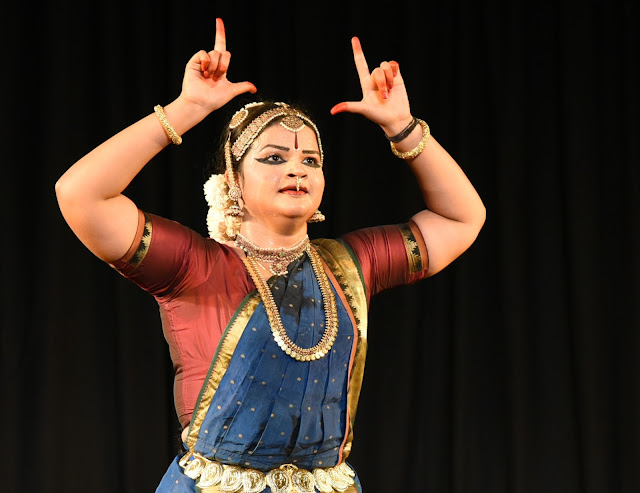 The fourth piece was in Darbari Kannada, a Meera bhajan called ‘Hari tum haro jan ki peer’ choreographed by Smt.Bragha Bessel. The instance depicted was the cheer haran of Draupadi, where the despondent Yudhishthir has lost all his assets to the Kauravas. Duhshasan drags Draupadi by her hair, brings her to court and pulls her saree. The bhakt-vatsala Hari becomes the saree. 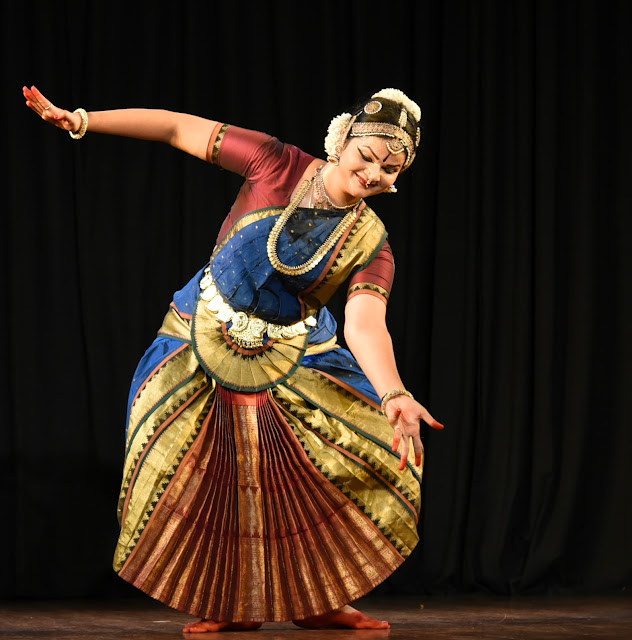 In the next instance depicted, the little boy, Prahlad, was saved by Lord Narsingh. He tells his father that he chants the name of his lord, who resides in everything and in all. And then Lord Vishnu appears out of the pillar. He drags Hiranyakashyap on his back and tears him open. 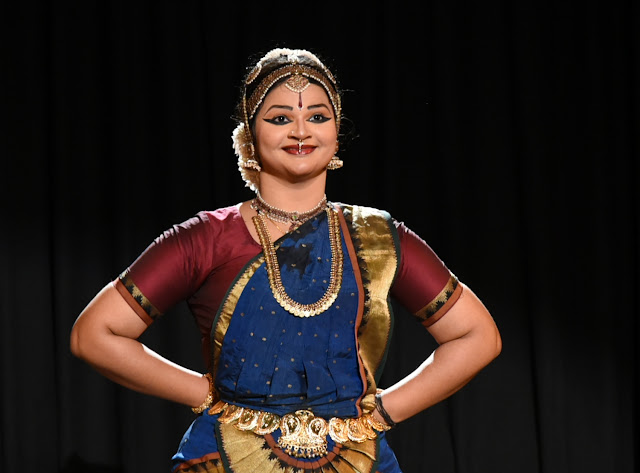 In the final tale, an elephant bathing in the water is being dragged by the crocodile to his death. The elephant cries out for the lord, who comes to his rescue. For the entire piece, the postures taken in the abhinaya, particularly that of the elephant being dragged by the crocodile, were good. The expressions and storytelling were skilled, with the dancer taking up varied roles with ease. 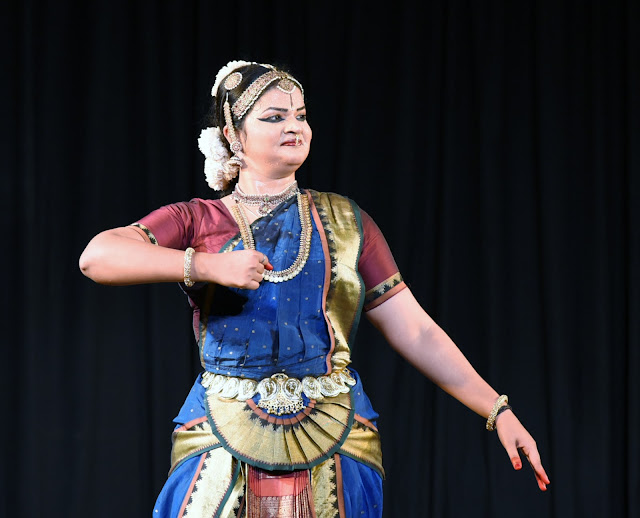 The final piece was a thillana in Shankarabharanam, an ode to Nath Srirangesh in aditalam. It was a choreography of Guru K Lakshman, and Gayathri’s footwork was quite effortless. 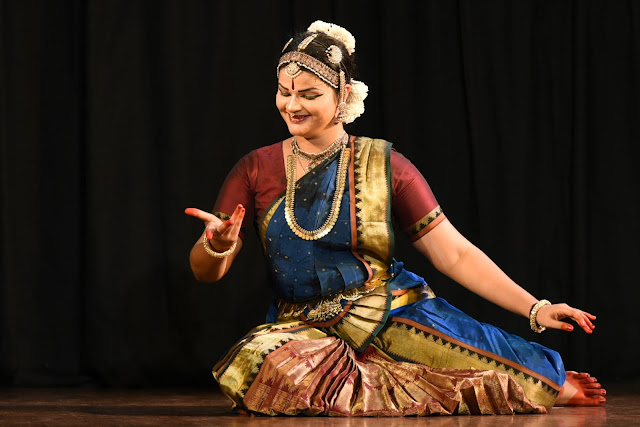