From Rilke to Tagore, Aditi dances to widening circles of inspiration

The foyer of LTG Auditorium in Delhi was lit by lamps casting shadows of lotuses and trees on the walls, the evening that Aditi Mangaldas performed Widening Circles earlier this month as part of the Natya Ballet Dance Festival. Aditi is a leading dancer of Kathak and is a disciple of Smt Kumudini Lakhia and Pt Birju Maharaj. She heads the Drishtikon Dance Foundation. 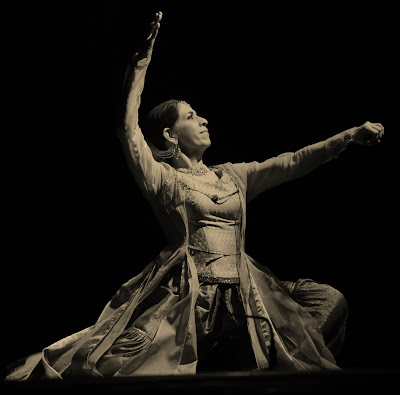 Perfection is the hallmark of all her performances. The concept and literature, choreography and dance – in this case, pure Kathak – rendition and recitation, all had the power of perfection. I too live my life in widening circles and I am thankful to be a part of this one in particular for I could attend this performance. The performance was based on the concept of pratityasamutpada or interdependent co-arising, which is a Buddhist philosophy. The entire composition was divided into three parts: 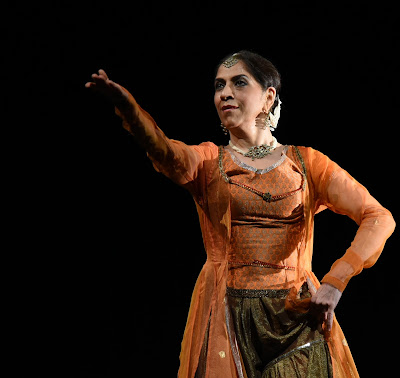 The sun: The glorious and the mighty to the delicate and the minute; it was an ode to the Sun. She has used the metaphor of a blossoming lotus, how a day in its life connects to the widening circles of life. Aditi was wearing a long shrug to depict the closed bud of the lotus. The Sun is worshipped since it gives light – rashmi or jyoti – to awaken life. ‘Om suryaye namah’ – Aditi depicted the chariot of the Sun, which is continuously moving. 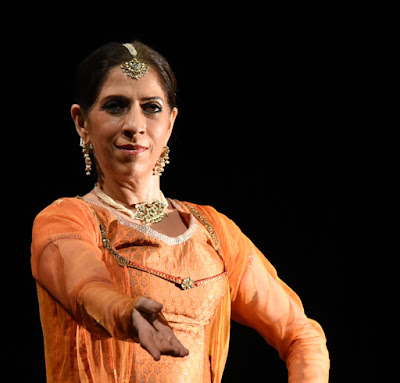 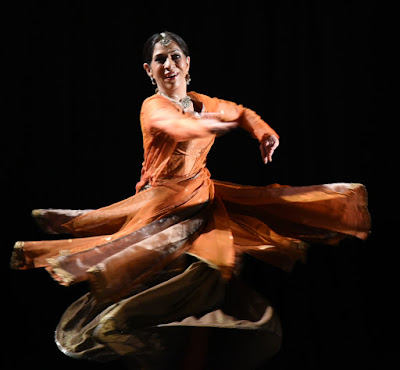 The nritta had very rapid ek paer ke chakkar, or spinning on one foot, to show the blossoming of the bud. She used padhant, tukda and tatkar for the surya stuti. Finally, the lights glowed yellow to show the rising sun and the lotus looking up to it. In a sitting position, she gently spoke, ‘I live my life in widening circles’. After an interlude of the sarangi, Aditi went on to do the second piece, the Earth.

The earth: Just as the bud opens at the crack of dawn, the stars blink and withdraw – a translation of the poetic line ‘chatak kali ki sitaron ko gudgudati hai’ from a couplet by Ahmed Nadeem Qasmi. 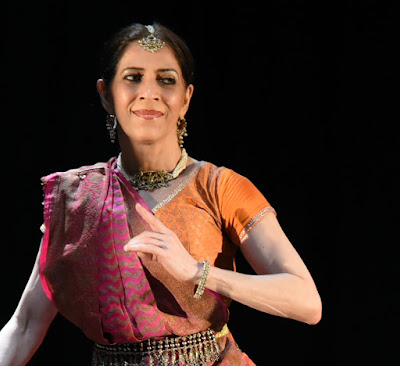 For this piece, Aditi wore a pink dupatta on her lehenga. The piece started with the footwork and shuddering of ghungroos, with the sound of a gong interspersed with silences. As the lotuses are blossoming, the grass and the trees grow vertically, and the deer prances horizontally. The lion follows the deer, which is then scared and tries to escape. 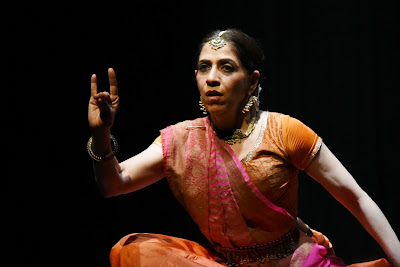 As the lion kills the deer, the hunter comes for the lion. As the hunter is distressed by the heat and the thirst, he washes and drinks from the river, and there, he sees the lotus in full bloom with the bee hovering over it, and he is reminded of his own beloved. It is then that the rain pours, shown by shuddering of feet, the droplets fall to the earth and the clouds thunder. The boatman rows the boat and drops his net to catch the fish in the river, where the lotus belongs. This is how life in the day of the lotus goes on. 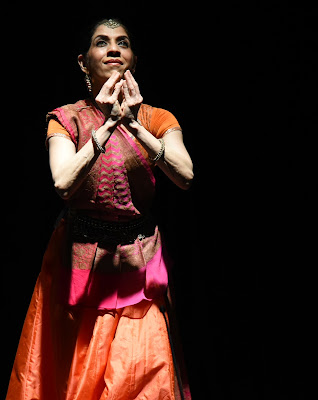 Aditi did some excellent nritta and nritya for the piece, and finally sat down to recite ‘I live my life in widening circles that reach out to the world. I may not complete this last one, but I give myself to it’. Then she recited the poem On The Day When The Lotus Bloomed by Rabindranath Tagore:
‘On the day when the lotus bloomed, alas, my mind was straying,
and I knew it not. My basket was empty and the flower remained unheeded.
Only now and again a sadness fell upon me, and I started up from my
dream and felt a sweet trace of a strange fragrance in the south wind.
That vague sweetness made my heart ache with longing and it seemed to
me that is was the eager breath of the summer seeking for its completion.
I knew not then that it was so near, that it was mine, and that this
perfect sweetness had blossomed in the depth of my own heart.’ 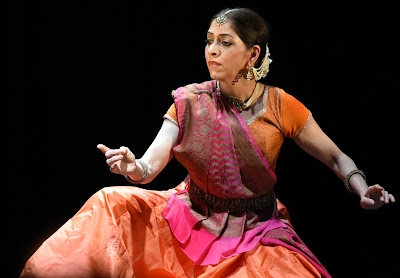 There was an interlude of a duet between the pakhawaj and the tabla by Ashish and Mohit Gangani. It is always an enthralling experience to hear them play.

The moon: The final part of the performance was ‘The Moon’. ‘The moon rises and alas I, the blossoming lotus, once again a bud, must endure these pangs of separation from my beloved’. When darkness sets in, the flower closes into a bud again, waiting for the sun to bloom. This was depicted in a bandish by Meerabai. Aditi wore a golden dupatta for it. ‘Main virahini, baithi jaagu, jagat sab soye’ – in my separation, I am awake as the world sleeps. In a seated position, she did the abhinaya for this piece – ‘while the others string beads, I string my tears (asuan ki maala poye). I spend the night counting stars. When will my moment of union and happiness come?’ 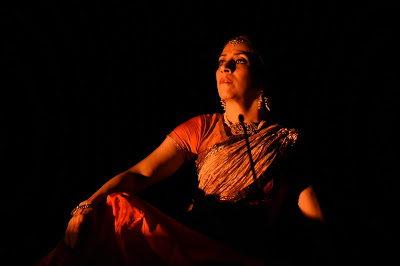 The stage had no lighting at all – the darkness symbolic of the sadness of the flower. Aditi entered the stage holding two lights, and did the abhinaya seated. The heroine is waiting and listening for footsteps or the sound of knocking from her beloved. She has put her baby to sleep and waits as she keeps dozing off. Outside, all creation is asleep, even the watchman. She reminisces about her embrace and the kiss of her beloved, which was a very sensuous portrayal by Aditi. The lotus awaits its beloved. 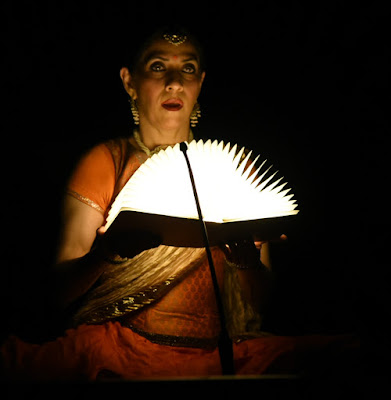 Aditi blew out the lights as the darkness set in, she opened a book which was lit from inside and finally recited Widening Circles by Rilke. ‘I live my life in widening circles, reaching out to the world… I may not complete this last one, but I give myself to it. I circle around the god, the primordial tower and I have been circling for thousands of years, and I still don’t know, am I a falcon, a storm or a great song?’ Aditi received a standing ovation for an impeccable performance, a very moving recitation and a concept that was unique. 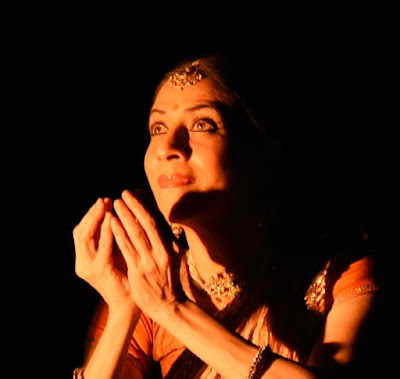 About the performance, Aditi said, “The concept was based on the Buddhist philosophy of pratityasamutpada - this is because that is. Everything in life is inter-related. That is why I had the theme of the lotus and the sun – one is mighty and the other a small speck of creation. The next is the earth and the lotus, and basically, the words said that at the crack of dawn, the stars seem to wink and withdraw – ‘chatak kali ki sitaron ko gudgudati hai, yeh kayanat ka ahang hai ya seher-e-hayat’. When the lotus opens, it’s as if the lotus is controlling the stars. Is it the earth vibrating or a miracle? The third is the virahini nayika, which is the lotus waiting for the sun. Rilke’s poem was a very beautiful connecting factor between all three. I had used it earlier in Footprints On Water. In the first piece, I only said, ‘I live my life in widening circles’. In the next, I recited two lines, and in the third line, I recited the entire thing. There is an unknown quality to it – you’ve been circling around god for thousands of years, but you still don’t know what you are. Rilke’s poem tied the pieces together in the poetry part. None of these things are directly connecting. One thing connects to the other, the inter-connectedness of life is an unexplainable thing. The basic idea is questioning – who am I? The poem is not interpreted in any of the pieces. It’s just a thread to knit these three pieces together in a poetic rendering of the concept.” 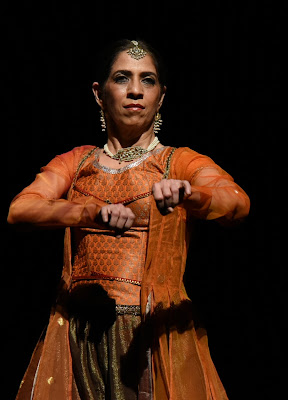