It was a festival where the masters exhibited their skills. On the 29th of February and the 1st of March, Sarngadeva Samaroh was held at the India Habitat Centre in Delhi. The ‘Sangeet Ratnakara’ of Sharangadeva (13th century) is a musicological text like the Natya Shastra, and it is important to both Hindustani and Carnatic musicians. Written by Sharangadeva (Sarngadeva), the first six chapters deal with music, and the last one deals with dance.

On the 29th of February, Guru Madhavi Mudgal and her disciples performed at the festival. Madhavi Mudgal is a renowned exponent of the Odissi style. She is the disciple of Guru Kelucharan Mahapatra. She has received repeated acclaim in major cities and dance festivals throughout the world. At home, she has been awarded the Padma Shri, the Sanskriti award, the Sangeet Natak Akademi award and many more honours.

Here, she began her performance with an invocation to Lord Shiva, a mangalacharan. It was a composition from Sangeet Ratnakara, and the music was composed by late Pandit Abhiseki. Next, it was a pallavi choreographed by Guru Kelucharan Mahapatra, the music for which was composed by Pandit Bhuvaneshwar Mishra. The solo by Madhaviji saw some pure nritta executed with excellence. Her footwork was very delicate, rhythmic and controlled, and hastas perfect. The movements were very graceful. 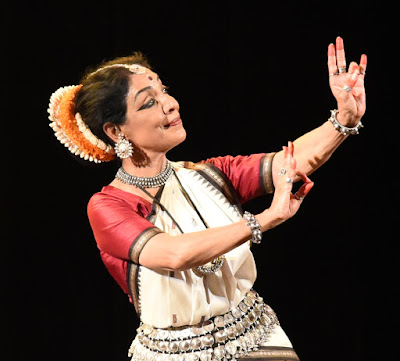 The third piece was an abhinaya one based on an ashtapadi from Geet Govind by Jayadev, Kisalaya Shayanam. The poetry says that Radha is annoyed with Krishna and he is trying to appease her. He tells her to place her lotus feet on a bed of new tender leaves so that he can press them. He asks if he can remove her anklets or the noopur and caress her feet. The music was by Shri Madhup Mudgal and the choreography, with emotional inputs and graceful movements, was by Madhavi Mudgal.

The next piece was a raga Mallika pallavi. The ragas that were used were Hamir, Kamod, Kedar and Chhayanat, emerging from Kalyan that. The choreography was by Madhavi Mudgal and music by Madhup Mudgal. The pallavi had complex patterns with alternate and complementing movements. The piece was performed by Shalakha Rai and Shobha Bisht.

Following this was another abhinaya piece based on poetry by the famous Odiya poet Gopal Krishna Pattanaik. The nayika here is a virahot kanthika nayika, who is awaiting Krishna’s arrival. The nayika in her separation is talking to the bhramar, or the bee - “Did you see him? Has he sent you with a message for me? It is the bee that seeks the lotus, the lotus does not come to it, just as I am pining for Krishna.” She is desperate and confused and the sakhi chides her for speaking to an insect who does not understand her feelings. In her choreography, Madhavi shows the nayika waiting in the kunj or the bower when the bee comes. She follows it around. Krishna here is shown as the Girivardhari, or the one who bears the mountain on his little finger, the one who danced on the hood of the Kaliya Naag. The abhinaya was depicted with all the subtlety the piece required. 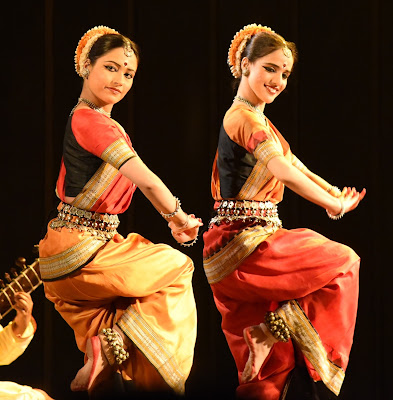 The concluding piece was a group choreography- Madhurashtaka. The composition is by 16th century poet Shri Vallabhacharya. The lyrics describe the attributes and beauty (madhurta) of Krishna - his lips, his body, his eyes, his smile, his words, his leelas, his clothes, his gait, his flute, the dust under his feet, his hands, his feet, his dance, his friends, his songs, his tilak, his gunjamala, the river Yamuna and its shores, its water, the blooming lotuses, the gopis, his srishti (creation) and his nurturing and destroying of it are all lovable and adorable. The group, through nritta, nritya, formations, stances and group choreography, depicted the piece with a lot of grace, ending with the stance of Krishna with his sakhis and cows. The choreography was by Guru Madhavi Mudgal - the footwork left a real impression. The music was by Shri Madhup Mudgal.

About the programme, Madhaviji said, “The first piece that I did was based on the tenets of Sangeet Ratnakara, since it is a Sharangdev mahotsav. The second piece was a bihaag pallavi, a composition by my guru, Kelucharan Mahapatra. It is interesting because it uses mahari movements. The next was an ashtapadi, followed by a duet pallavi in raga Mallika, taal Mallika.

The next was poetry in Oriya. The nayika in her unmaad (passion) is talking to the bee, even as her friend tells her that the bee will not reply.” 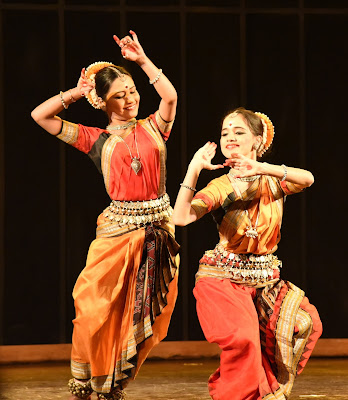 The dancers were Sudha Mukhopadhyay, Shalakha Rai, Shobha Bisht, Prerna Agarwal and Dipika Bisht. On the pakhawaj was Jitendra Kumar Swain, Gandhi Mallik on the manjira, Manikuntala Bhowmik and Kshitij Mathur on vocals, Kiran Kumar on the flute, Yar Mohammad on the sitar, Diwan Singh on the tanpura, and the lighting was by Sandip Dutta.

The next day, it was the turn of Parwati Dutta and her disciples. Visitors were greeted by a white coloured rangoli in the foyer of the venue.

Parwati is a versatile Odissi and Kathak dancer. She is a senior disciple of Guru Madhavi Mudgal, Padma Vibhushan Guru Kelucharan Mohapatra and Pandit Birju Maharaj. She has been conferred the UNESCO Cultural Award, Nritya Bhushan, Bharat Kala Ratna and many other prestigious awards. She is the director of the Mahagami Gurukul in Aurangabad.

The third composition was in taal Vasant, a piece based on Vasant Rituraj, beginning with a shloka and then paran and uthaan, all in nau maatra. It was performed to Charu Taram Vasante, a composition by Kalidasa. Describing the season, the words say that the trees are laden with blossoms, the air is pleasantly scented. A disciple of Parwati performed the piece. The pace of the piece was good, with chakkars and some footwork, and clean technique. 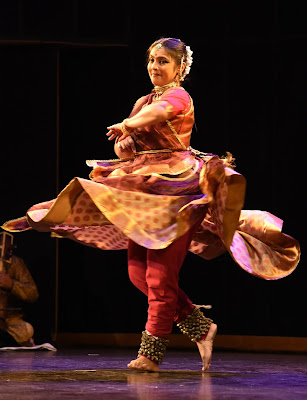 The next piece was a composition by Tansen about the rainy season. It was in dhrut taal in dhrupad using tatkar, paran and layakari - Indra Aayo Re. The piece depicted the lifting of the Giriraj parvat. When the wrath of Indra befalls Vrindavan, Krishna lifts Giriraj on his little finger and saves the people of Vraj from the torrents of rain, keeping them under the hill - ‘barasat musaladhaar’.

Following that was an abhinaya piece based on a thumri - ‘Mooratiya man mein basi ghanshyam (I looked for you everywhere, in Gokul and Vrindavan, and found you in my heart). The abhinaya in this one was very expressive. 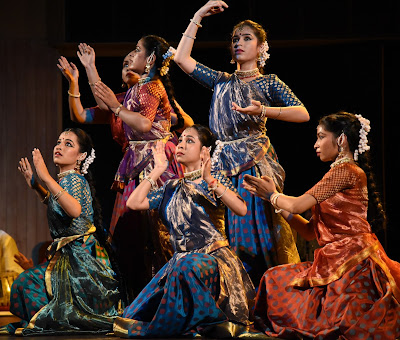 The final piece had a very interesting theme - it was shown how the varnas in Kathak have a reeti (method), which is like upasana (worship); that is, the padhant is not meaningless utterance. Each syllable has a meaning. The pakhawaj bol - ‘din’ - is like the suryodaya or the rising sun, and ‘dhan’ is dhyan (meditation). Every beat and every bol, every taal of pakhawaj, denotes a meaning. The group choreography was done very well and the technique was flawless. The piece ended with the chanting of ‘Om ganagadi’ like a mantra.

As a blessing to Parwati, Pandit Birju Maharaj gave a short performance at the end. Maharajji can attribute a lot of meaning to the bols of padhant. He said the trees are like dancers. Sometimes the bols are recited as if somebody is writing a letter. Then he went on to describe how the bols can show a bird feeding its fledglings in the nest. The pakhawaj was by Sukhad Munde, and sarangi by Sandeep Mishra. 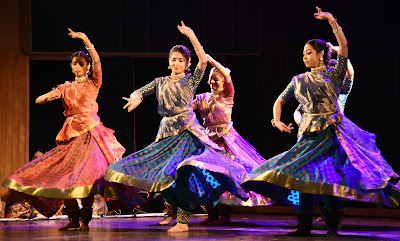 Parwati’s explanation of her performances was as in-depth and expressive as the performance itself: “I began with a solo, a composition from Sangeet Ratnakar by Sharangadev. It was an invocation of Naad Brahma. The manifestation of Naad Brahma can also be visualized and understood as light or Surya Dev. For this, I took another ancient poetry written in the 7th century invoking surya and describing it in a poetic manner. The verse says that the rising sun shines like a diamond on the head of a serpent, as if the entire universe is a sapphire tree and a golden leaf is the sun. For all those yogis who are trying to cross the sea of this world, the sun is like the mangal kalash, which is a symbol of an auspicious journey. Then I did some rhythmic, technical pieces in chautaal. I am more inclined towards the dhrupad and pakhawaj, and I try to revisit and revive these ancient glorious traditions of Kathak. I took a few pieces of the temple tradition as a part of my repertoire.

The second piece was by my students in nau maatra. I wanted to showcase the aura and energy of vasant. We started with verses from Kalidasa’s Ritusamhara, and then there were a lot of rhythmic patterns in nau maatra taal, bringing out the energy of vasant taal. The third piece was a dhrupad composed by Tansen on the rainy season. It had some excerpts from Govardhan Leela, and had the dance delineation of dhrupad. It is a different form of music and so the music rendition needs to have that kind of vigour, poetic majesty and grandeur, because dhrupad verses have different kind of words. I was also trying to think of different kinds of movements to go with the verses. 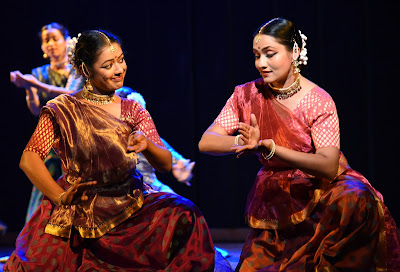 The fourth piece was a traditional thumri, ‘Murati tohri man mein basi Shyam’. The last piece I named Varnareeti, that the varnas (abstract syllables) have a tradition. Once, Kathak was a temple tradition, kathavachan (storytelling) was an important part of Kathak. Padhant or recitation is still an important aspect of Kathak. I wanted to bring all these elements together - the sound of ghungroos, the syllables, the sound of pakhawaj, of utterances. I wanted it to be a sacred offering. I begin with a Ganesh paran - just recitation, as that’s how dancers would begin in the ancient times, with recitation or padhant. It was attempt to relive that ancient practice, so I used a lot of metaphors from pakhawaj. ‘Dhaan’ is dhyaan, ‘din’ is sunrise, the light of knowledge, realisation, and then I tried to weave it into a jap or repetitive mantra. I don’t want to connect it to any religion (on being asked if these are offerings to the Lord), but these utterances have a divine power. According to the scriptures, we know about the beejakshar, the power of the mantra, the power of utterances. If we refer to the Natya Shastra, they refer to shishkakshara and stobhakshara. These are ritualistic utterances. There was always a practice of uttering them before a perfomance to sanctify the dancing space, to pacify the negative energy and to bring in positivity. The Natya Shastra and Sangeet Ratnakara, according to research, connect the dancer directly to the recitation or padhant. As a Kathak practitioner, I feel they are not just bol (spoken beats). It is abstract poetry, which is meant to sanctify the space. Personally, when I do the padhant, I get a kind of energy and inspiration. That is the light or power - the padhant is a puja.”