Three devis and their nritya shakti

Guru Raja and Radha Reddy organized a three day festival, Parampara, at Kamani auditorium in Delhi recently. On the last day, there was the enactment of Antaram. This was a performance that blended dance and theatre. The flower rangoli in the foyer had myriad colours, like the art forms depicted in the performance. 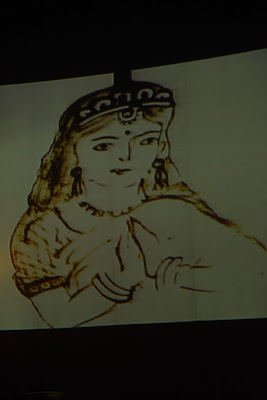 Antaram was a celebration of all these art forms – sand art, tholubommulu or leather puppetry, mime theatre, sculpture, artworks and graphics, and the dance forms of Kuchipudi, Bharatanatyam and Mohiniattam. 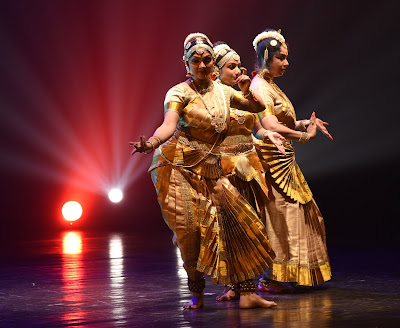 Antaram was summarized in these lines by the performance’s concept note: ‘Antaram is that which lies within. Internalized. Intrinsic. It is mystique, feminine manifestations or attributes. Roopantaram is a manifestation of that feminine power. It explores the distance between form and psyche.’ The dancers were Yamini Reddy (Kuchipudi), Krithika Subrahmanian (Bharatanatyam) and Gopika Varma (Mohiniattam). Yamini is the daughter and disciple of Drs Raja and Radha Reddy. She has been awarded the Sangeet Natak Akademi Bismillah Khan Yuva Puraskar for dedication to Kuchipudi. Krithika Subrahmanian runs the Namaargam Dance Company. Mohiniattam exponent Gopika Varma is also married into the royal family of Travancore, to Prince Pooruruttathi Thirunal Marthanda Varma. She has been trained under Guru Kalyani Kuttyamma and Shri Kalamandalam Krishnan Nair. She is known to ‘dance with her eyes’.


Talking about the concept of the performance, Yamini said, ‘We portray ordinary women who achieved divinity through their sacrifice. Vasavi from Andhra Pradesh was a simple girl and did not want to marry Vishwavardhan. Nevertheless, she does not want any bloodshed. So she sacrificed herself, and her intentions were so pious that she rose to divinity. She represents the gyanashakti. Andal from Tamil Nadu wears the garland herself before offering it to the Lord. Her ichhashakti is so pure that Lord comes down himself to marry her. Kannagi from Kerala, due to the injustice done to her, burns the city of Madurai. It is her kriya shakti that makes her great, and she is worshipped as the Attukal Bhairavi.” The character of Rambha, played by Suhasini Maniratnam, the conceptualizer of the presentation, is the embodiment of all three shaktis. 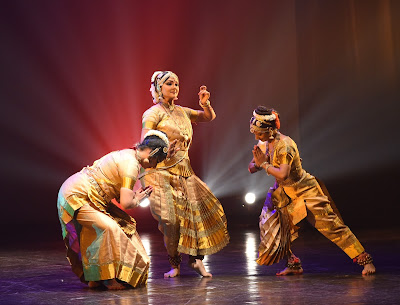 Suhasini has woven the three stories together and given them contemporary relevance, with short interludes of acting. She began her act as a teacher or a storyteller. She talked about the different stories we hear from different people. Here, she related the story she was told by the actor Anant Nag. They were shooting for a movie when he was taking his own sweet time to finish a scene and she was in a hurry. He told her the story of an animal farm where all the animals were living together happily in fresh air and plenty of sunlight. And then one day, a trap door opened and they scampered on to the conveyer belt in a hurry to see what was at the other end - and got slaughtered. That is the consequence of hurry, he said. In her narration, Suhasini said they would tell three stories from the Sthal Puranam, devotional documentation and from literature. Gods come to the earth as ordinary humans to interact with mankind . That day the auditorium itself had become the abode of the Gods. 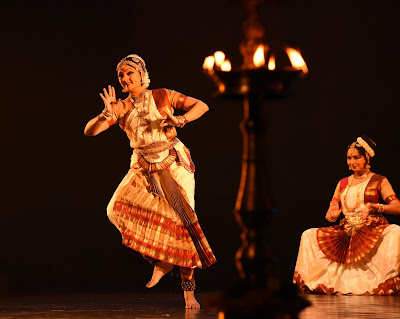 After the defining of Antaram and Roopantaram , the performance began with a devi stuti describing the devi as the mother Jagdamba, Karuna Rashi, Mata namo. The background screen had sand paintings of the Devi. The narration described the three powers of the inner self – ichha or will power, kriya or purposeful action, and gyaan or the power of discernment. The three dancers appeared on the stage in white sarees with red borders, the typical colours of the devi. Their nritta was laden with flow, flexibility and beauty. Next, Suhasini appeared on the stage as an airhostess to elaborate the story of Vasavi. This act was done well and dressed up as the airhostess, Amrita, she was quite effective. The story was based on the real life story of a little girl who was married to a shaikh for a little amount of money. The airhostess mistakes them for grandfather and granddaughter, but when she comes to know that the little girl, Amina, is married to a 65-year-old man, she raises a lot of hue and cry and manages to get Amina out of the situation. But all this goes in vain when Amina, at 25, is again forced to marry a 55-year-old widower. 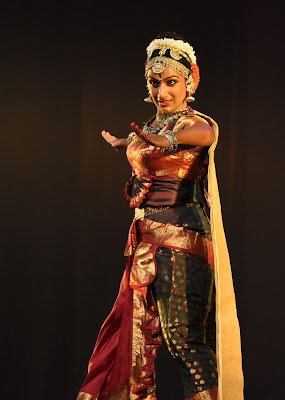 This story of Amina can be carried back in history or in mythology to a kingdom in Telangana under the king Kusuma Sresti. Here, the women were much more liberated. He had twin children – Virupaksha, a warrior, and Vasavamba. This little girl of 15 years was interested in art and architecture. The powerful king, Vishnu Vardhana, had set his eyes on her and forced the king to marry his daughter to him. She called the gotras – 714 of them – and 612 said sacrifice the girl. Only 102 said wage a war. Vasavi said she was ready for atmabali instead of a war and jumped into the agnikund. Here, her sacrifice raised her to the pedestal of a devi. Back then, in mythology, the lecherous king was punished. But the rich of today roam in their Rolls Royce even after offending the women. 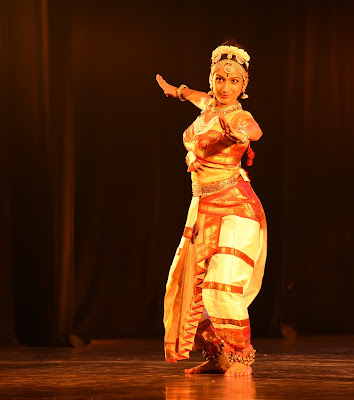 In the portrayal of the story, the background screen showed a fort. Yamini portrayed the beautiful 15-year-old girl and the arrogant king who forces himself on her. Her dance had very flexible and graceful nritya and very effective abhinaya.

The next story was that of Andal or Godamba. She represents ichhashakti or the capacity to envision, wish and achieve.


Suhasini enacted the story of a grandmother called Godamba. In a busy household, she is running errands for all and looking after her grandchild too. And then she is chided by her husband for misplacing his glasses, by her son for forgetting to wake him up. The husband introduces his family to a friend by recounting their academic achievements but his wife, though she is well educated, does not find any mention since she is “just a housewife”. Suhasini enacted the piece well, but the act was ruined by a malfunctioning sound system. She improvised the dialogues on stage and made a joke about the glitch. 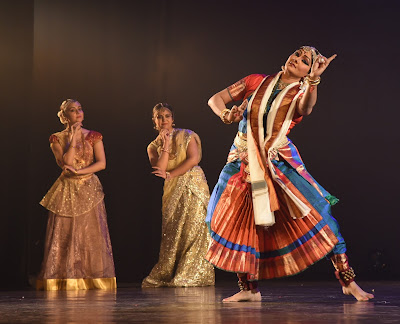 Andal’s story dates back to the 10th century in Tamil Nadu where a gardener finds an abandoned baby girl. He brings her up as his own daughter. The little girl would wear the garland herself first and then send it to the Lord Tirupathi, which is considered a blasphemy. The priests found out the truth and did not present the garland to the Lord. The Lord then himself appeared and asked for the garland, and took Godamba as his wife. 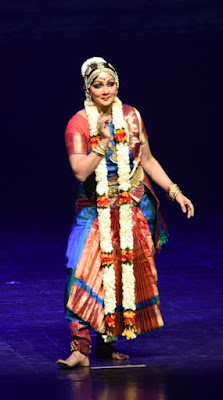 The screen showed a temple in the background. Kritika Subrahmanian enacted the piece in Bharatanatyam. Her abhinaya showed the little girl picking flowers and weaving them into a garland and presenting it to the Lord  was impressive. Andal was shown holding a parrot in one hand and a lotus in the other. The attributes of Lord Krishna -  ‘Shankha chakra kirit kundal sapeet vastram kaustubh mani’- were shown with a lot of flair. Kritika’s abhinaya as a little girl was impressive and so was the music score in the background. 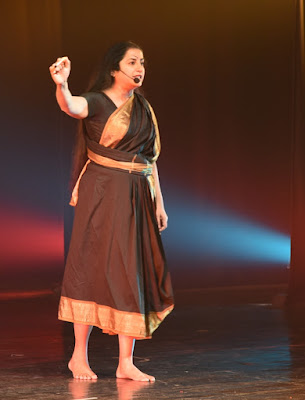 Kannagi was an ordinary woman whose husband was falsely accused of the theft of the queen’s anklet. The king sentenced him to be hanged till death. Since Kannagi is the manifestation of kriyashakti, her actions brought her divinity. She burnt the city of Madurai and is worshipped as the Attukal Bhagavathy. Suhasini enacted the piece and her black saree and her whole persona was that of Maa Kali. Here again, the mike that was not functioning earlier, became too loud and that was a big letdown. 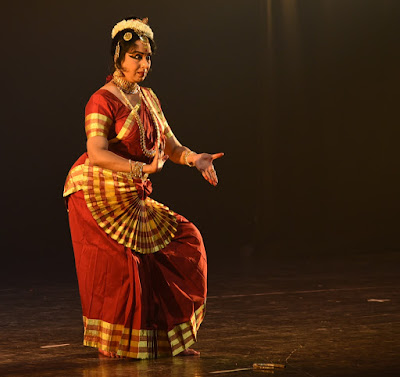 The act was followed by Mohiniattam by Gopika Varma. Gopika, with her stunning looks and a red saree, looked every bit the embodiment of the Devi. The attributes of the goddess- ‘Jagadambika, Vishweshwari, Adi Anant, Shive, Shankarapranavallabhi, Tripur Sundari, Matrirupini, Narayani’ (Mother to all, Goddess of the world, Without beginning or end, Beloved of the Lord Shankara, The most beautiful) were flawlessly depicted with a lot of expressive nritya. The lights highlighted the beauty of the piece. 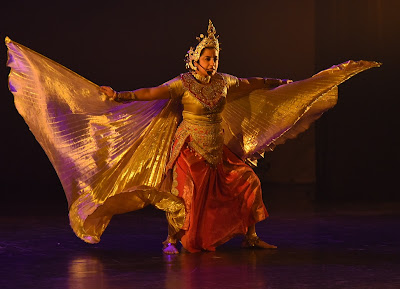 The next story of the performance was that of Rambha, a fifteenth century dancer from Sri Lanka, which was then a part of the south Tamil kingdom. Rambha, played by Suhasini, was an accomplished scholar as well. She got an invitation from King Adil Shah to perform in his court. But Rambha turned it down saying that she was a scholar and not here to entertain the king. She accepted the invitation on the condition that all the women in the king’s harem would attend her performance with their veils lifted. After the performance, the king met her and contrary to her expectations, turned out to be a thorough gentleman. They developed a friendship and often met and discussed the arts and architecture. Rambha developed feelings of passion towards the king. Adil Shah then built the Gol Gumbad. He invited Rambha to see the seven story-high structure, with the second largest dome in the world and whispering galleries. Here, Rambha heard those magical words from the king and she danced with joy. Rambha looks down at the burial area for the royal family and asks for space alongside the queen. The king tells her that he loves her but cannot give her that privilege, since she is not his queen. So she jumps from the terrace into that area and assures herself a niche there. To date, every visitor to the Gol Gumbad shouts Rambha Ho! And Rambha, buried next to the queen, turns in her grave with a smile. Rambha personifies all three - the ichha-shakti or wishfulness in your yearnings, kriya-shakti, a force driving your actions and gyana-shakti, to find the divinity in yourself. Antaram or your inward vision gives ‘Anandam’. Finally, all the three dancers appeared in golden dresses for the finale of the evening. 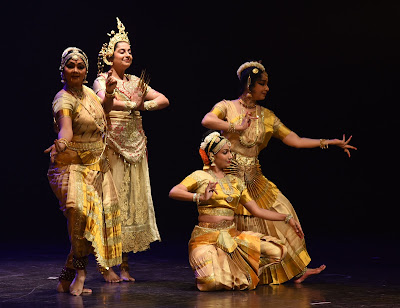 The entire performance was immaculate in many ways, like the weaving of the concept and its executions into other art forms like dance, music, theatre and multimedia presentations. The costumes were aesthetically done. But the irony of the entire concept was that what happened to women centuries back and was acknowledged as sacrifice to achieve divinity still goes on, but in vain.