Nirtya Darpan was held on the 13th of September at the IIC in Delhi. It was a journey through Indian art forms in the Guru Surendra Nath Jena style of Odissi. Guru Jena’s style Is inspired by the temple sculptures of Orissa. The state is rich in various art forms like the Jatra theatre, Patachitra scrolls, Oriya texts and exquisite temple sculptures of the Lingaraj, Puri, Konark and Chausath Yogini temple. His is a style that “brings temple sculptures to life”. Pratibha Jena Singh, his disciple and daughter, said that this style of Odissi shows how a sculpture would move as a body. About the choreography, she said that she has taken inspiration from the sculptures of Mukteshwar and Lingaraj and combined them with the shlokas of Adisankaracharya and Oriya poet Acharya Brihaspati, and bound it all in rhythm and taal.

Swati Vivek and Jaya Mehta are the disciples of Pratibha Jena Singh. They work together as a team to create the Dance Travels and various Odissi workshops for children and adults. Swati has been honoured with the Pratibha Sanskritik Samman, Delhi, in 2007. For the evening, they started with a performance by Saraswati Mangalacharan and a piece titled Konark, which I sadly missed. The third piece was Shreet Kamala, based on an ashtapadi by the great bhakti poet Jayadeva. This composition is popularly used as an aarti in Vaishnav households. The poem describes the beauty of Lord Vishnu through stories of Krishna and Ram. In her depiction, the dancer shows Krishna and his friends playing with a ball. The ball falls into the river and Krishna jumps into it after the ball, vanquishes the serpent Kalia and dances on its  hood. He is the destroyer of demons - madhu mur naraka. Rama, on the other hand, is the consort and shringara of Janakasuta or Sita. He is the slayer of the demon king Ravana. Here, the dancer depicted the story of the swayamvara of Sita, where Rama breaks the bow of Shiva. The lord has a complexion like a lotus and bears the Giriraj Parvat on his little finger. The music was based on raag Khamaj, taal khemta, tripata and ektali. It was a well-executed piece with good interpretive dance. 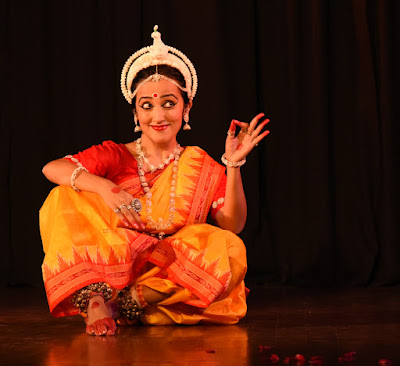 The next piece performed by Jaya was a solo, Saja Saja Saroja. It was based on a poem by the Odiya poet Banamali. The environs are full of beauty, flowers blossoming, birds singing, the moon reflected in the Yamuna. Radha is all decked up in her ornaments for the evening and Lalita, who’s acting as a messenger for Krishna, pleads with her to come along. As in the previous performance, the gestures and emotions were conveyed well, but as the dance form demands, the focus is on stances and not on the footwork, which is not very energetic. The bols sung by Guru Pratibha reflected the mood of the piece. Music and choreography were by Guru Surendranath Jena, the composition was based on raag Bajrakanti, taal jati, tripata, jhula and ektali. 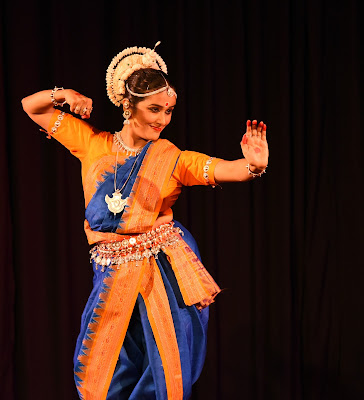 And finally, Swati performed a piece titled Shiva Shakti. It was based on the composition Shiva Pancha Stuti by Adisankaracharya, and Parvati Lasyam by Acharya Brihaspati, and inspired by the temple sculptures at the Lingaraj, Shukleshwar, Parasuramesvara and Mukteshvara temples. The description is that of Shiva’s attributes - the ornaments of snakes, half moon on his head, his long tresses tied into a knot, from which flows the Ganga river, damru in one hand, which gives the beats, agni in the other, trinetra - three-eyed - and his trident. He wears a garland of the skulls of demons, panchanan is his weapon, he smears the ash of cremation grounds on himself - bhasmalepan, and Nandi is his vahan or his vehicle. Shiva has bhoot-pret (ghosts) as his companions, and is always in a state of tapasya or meditation. Shakti, in contrast, is beautiful, ‘lalita anga suhasini’, adorned with ornaments, on her waist, a waistband, as she moves gracefully, feet adorned with anklets. The differences in them complement each other. They are purush and prakriti, tandav and lasya, merging as ardhanarishwara, the source of the universe, the primal parents. Swati’s portrayal of this piece with stances and abhinaya was particularly effective. Most memorable was her depiction of the bhoot-pret or ghosts. The composition was in raag Bageshwari, taal adital, jati and khemtal. The choreography for this piece was by Pratibha Jena Singh and music by Hari Narayan Das. For the entire performance, the live music ians were Hari Narayan Das (vocals), Prafulla Kumar Mangaraj (mardal), Pratibha Jena Singh (manjira and bol), Raj Kishore Dal Behera (flute) and Lavanya Kumar (sitar).