Two rivers meet in an ocean of dance

This fertile season in the arts scene in Delhi recently brought with it Vasantotsav, which was organized by Kalashram on the 25th, 26th and 27th of February at the Kamani Auditorium. The evening began with Dr Kapila Vatsyayan being honoured with the Achchan Maharaj Kala Jyoti Samman by Pandit Birju Maharaj. It was a pleasure to see a very lively Kapilaji, despite her not being too well that day.

The performers of the evening were Madhvi Mudgal and Alarmel Valli. Mudgal is a leading exponent of Odissi dance. She is the disciple of Guru Harekrishna Behera and Guru Kelucharan Mohapatra. She has many awards to her credit, notable among them the Padmashri in 1990 and the Sangeet Natak Academy Award in 2000. Valli is a doyen among Bharatnatyam dancers and choreographers in the Pandanallur style. She is the disciple of Pandanallur Chokkalingam Pillai and his son Subbaraya Pillai. She has been awarded the Padma Shri (1991), Padma Bhushan (2004) and the Sangeet Natak Akedemi Award (2001).

Madhavi Mudgal began her solo with verses from the Atharva Veda, where earth is described as the sustainer of all life - the land sustaining the flora and fauna and the rivers and seas sustaining aquatic life. The piece culminated in a pallavi celebrating life. The nritta piece was meticulously executed by Madhavi. Music was composed by Madhup Mudgal. The second piece was a composition of Goswami Tulsidas, detailing the sentiments of Lord Rama’s mother Kaushalya when she hears about him leaving for fourteen years of exile. As Madhaviji said, it was a piece choreographed 40 years back by Birju Maharajji for her when she was learning from him. The lyrics bring out the pathos of the situation – ‘Ramahu kaun jatan ghar rahiye, (O Rama! What will prevent you from leaving the house?) Jin shravanan suni vachan tihare, tin shravanan gaman sunati hoon, moten kaun abhagi’. In her depiction, Madhavi used slow emotive abhinaya. She depicted Rama without his ornaments, his hair tied in a knot on his head, like a tapasvi. Kaushalya beseeches Rama not to leave the palace. He is the same lad who played with her and embraced her and is now leaving her. He is the same child whose sweet voice she would hear and now she is hearing the news of his leaving for exile for fourteen years. Madhavi very skillfully depicted the emotions with her dance. She could portray the mother reminiscing about the past and her helplessness in the present situation.

Next, Alarmel Valli performed her solo, a padam in raag Charukesi, taal misrachapu. It was a composition by fifteenth century Telugu bhakti poet Annamacharya. In the poem, the devotee is agonized and bewildered since he is yearning for the divine. The poet draws upon the irony of the situation – by what means can I reach you, infinite Lord? Without beginning or end, I want to worship you fittingly with my hands but you are huge and encompassing all space. Valli’s depiction portrayed the four-armed stance of Lord Vishnu. The bhakta performs seva by bathing the idol, making chandan and applying it, stringing flowers into a garland and finally, doing the aarti. But the Lord to whom the seva is being offered encompasses the whole universe (vishwakaya). The bhakta says that he wants to gift the Lord some desirable gifts. But he is the very embodiment of all desires (sakalakamana). ‘I long to see you with my eyes, but I find that you have no visible form. What else is there for me but sharanagati or surrender? O Lord Venkateswara!’ The abhinaya was mesmerizing, bringing out the anguish of the devotee as he feels defeated. The hand and feet movements were all very precise and sharp. 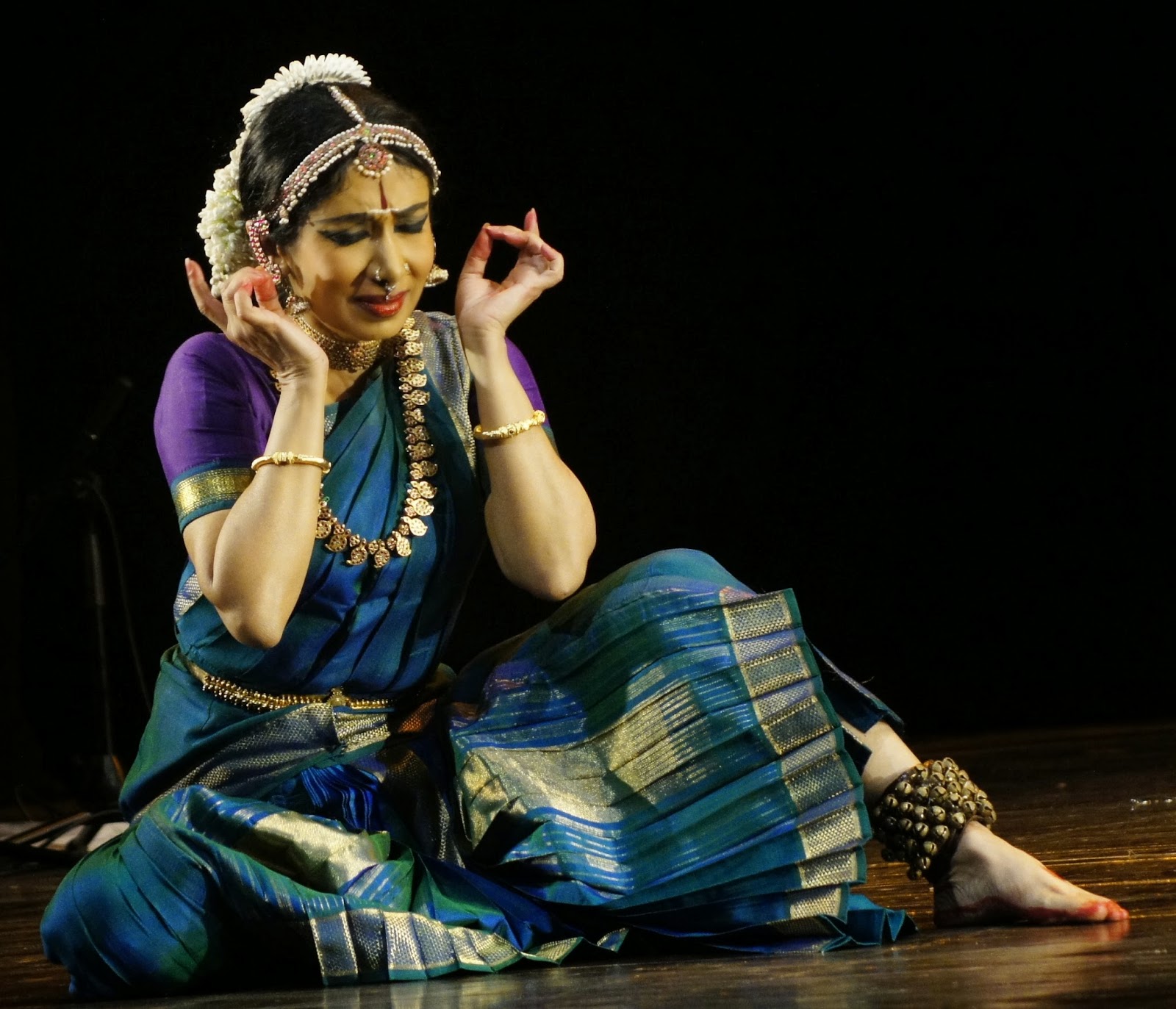 The next piece was Chanaro, a javali in raag Khamas, taal rupakam. Some attribute the composition of this javali to the Tanjore quartet and others to Puchi Srinivasa Iyengar. The nayika or Radha tells her friend that she is longing for her beloved. Radha celebrates her love and desire in a sensual mood. She is being peppered with arrows by Manmatha, and cannot bear the longing. Memories of her union with Krishna fill her with delight. Would the sakhi be her messenger to Krishna? In her depiction, Valli portrayed Kamadeva shooting the flower arrows. She is asking the parrot to shut up, since his voice is tearing at her. Valli captured the gait and attitude of the heroine as she is decking up and braiding her hair while admiring herself in the mirror. Valli’s abhinaya was not only perfectly emotive, but also perfect in complete movements, hastas and footwork, and in covering the entire stage.

‘Samanvaya’ – a pure dance piece was the culmination of the performance. It was the coming together of two doyens of two dance styles while still asserting their individualities. Both Mudgal and Valli made the dance and the musical genre of their forms come together. The lighting highlighted just the feet of the two dancers as the performance began, focusing on their footwork. In the woven tapestry of the two forms, the movements of both were juxtaposed to bring out their differences and similarities. The fast and sharp movements of Bharatnatyam were in sync with the fluid and wavy movements of Odissi. And yet together they looked so much in rhythm that it was a pleasure to watch. It is only the masters who could have done that. The music by Madhup Mudgal, Prema Ramamurthy and Lalgudi Sriganesh actually enhanced the whole
experience.

About the last piece, Madhavi said, “Valli and I have been friends, and to create something like this, you have to connect in your thoughts and inner self. And as friends, we match beautifully. We have created corresponding movements from both styles. The music too had to be worked on.” Valli added, “This piece has been in the making for some time. Every movement has to be juxtaposed against the other, as a foil against the other - some movements have been similar, some contrasting. We have used the strengths of each style. The piece took us about three months to complete. First, it was the music composed by bhaiya (Madhup Mudgal), with Prema giving the Carnatic inputs and the percussionists giving their bit. Each movement was worked out bit by bit. My mother was the third eye to our rehearsals, giving her inputs.”