Some performances are so evocative that they make you wish that the language barriers would melt away, and let you connect with every aspect of the verses and music they’re being danced to. The poetry is so powerful that you want to savour every word of it. It is dance that overcomes these barriers, since it becomes universal language. 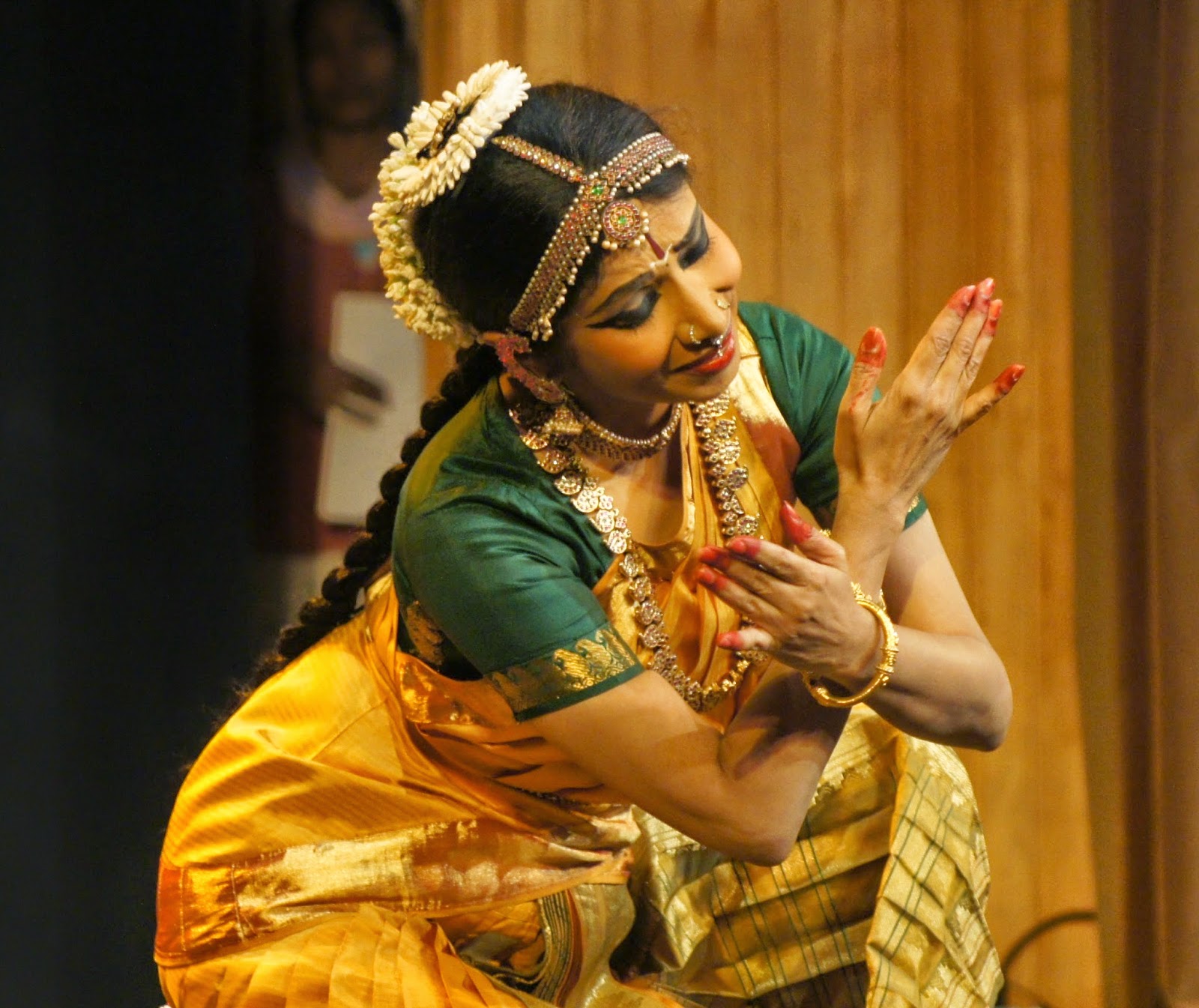 At the Habitat Centre in Delhi, the flowers were blooming to welcome the spring, when Alarmel Valli gave a solo Bharatnatyam recital on the 14th of March. The performance was based on the poetry of saint Annamacharya and it was titled ‘Is there some way I can reach you?’ Arundhati Subramaniyam, while tracing the trajectory of the performance, said that it started when she read a book, ‘The God on the hill’, a translation of Annamacharya’s poetry by an Englishman. It compelled her to revise her idea of bhakti literature. Annamacharya was not only a saint but also a bard, a poet with range, depth, ingenuity, voltage, who sang sacred and sensual poetry. His portrayal of the Goddess is unabashedly erotic, which shows body and soul are not exclusive. 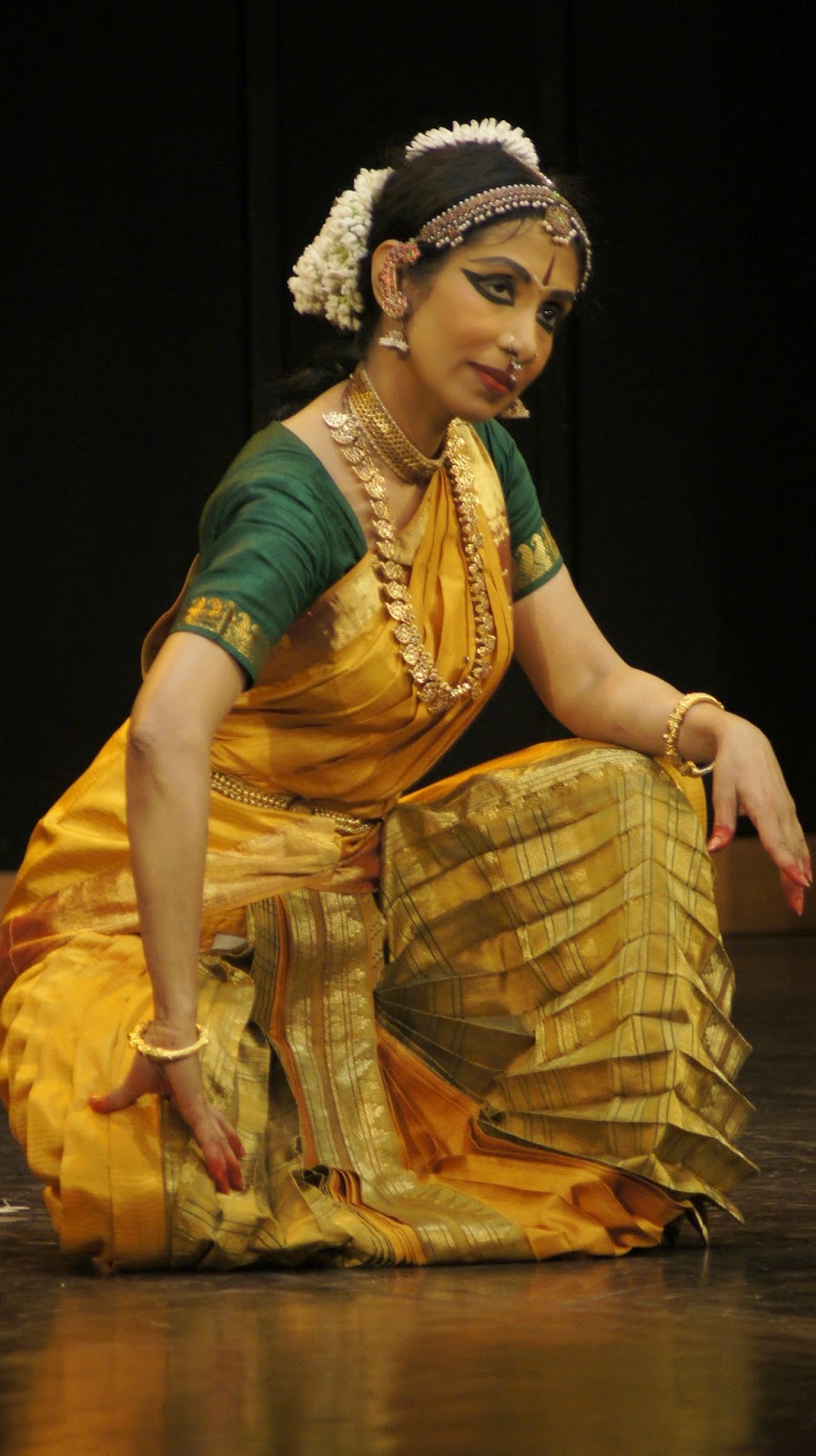 Annamacharya was known to live in the fifteenth century, when he used to compose a padam a day in praise of Lord Venkatesh. These songs were rediscovered in 1922, inscribed on copper plates. On the one hand, these poems were introspective, the words of a seeker, beseeching and imploring. On the other hand, they have shringar rasa. The poet writes as the goddess Alamelu Manga herself, who is the Lord’s consort. The poems take you straight to the bedchambers of the god, where the master of the universe becomes the slave. They are erotic and at the same time, subtle and intimate. 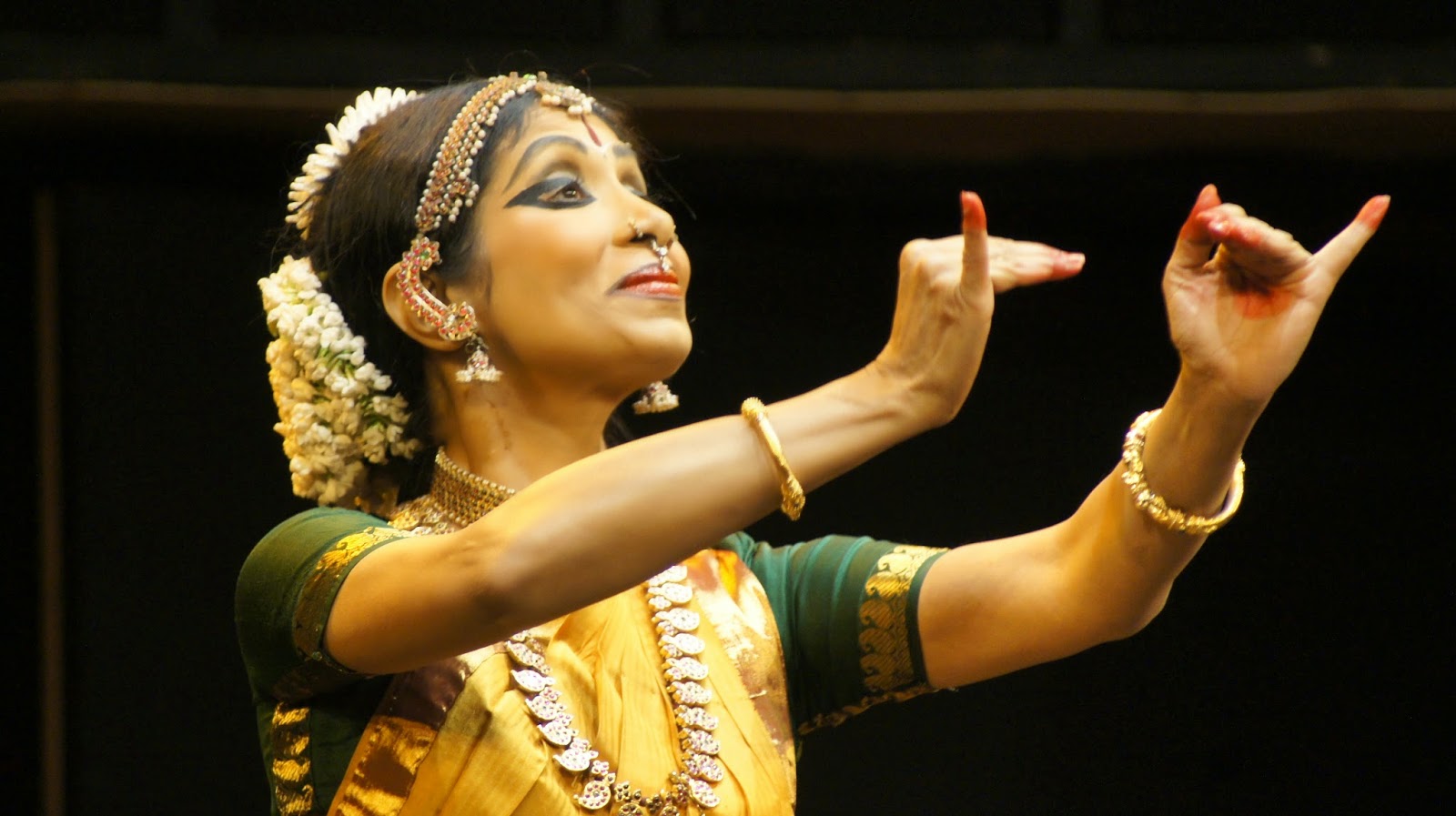 Alarmel Valli is a dancer and choreographer, and the foremost exponent of the Pandanallur style of Bharatnatyam. She has been trained under Pandanallur Chokkalingam Pillai and his son Subbaraya Pillai. She has been awarded the Padma Shri, the Sangeet Natak Akademi award in 2001 and the Padma Bhushan in 2004. She is the founder of Deepashikha, a centre for fine arts in Chennai. 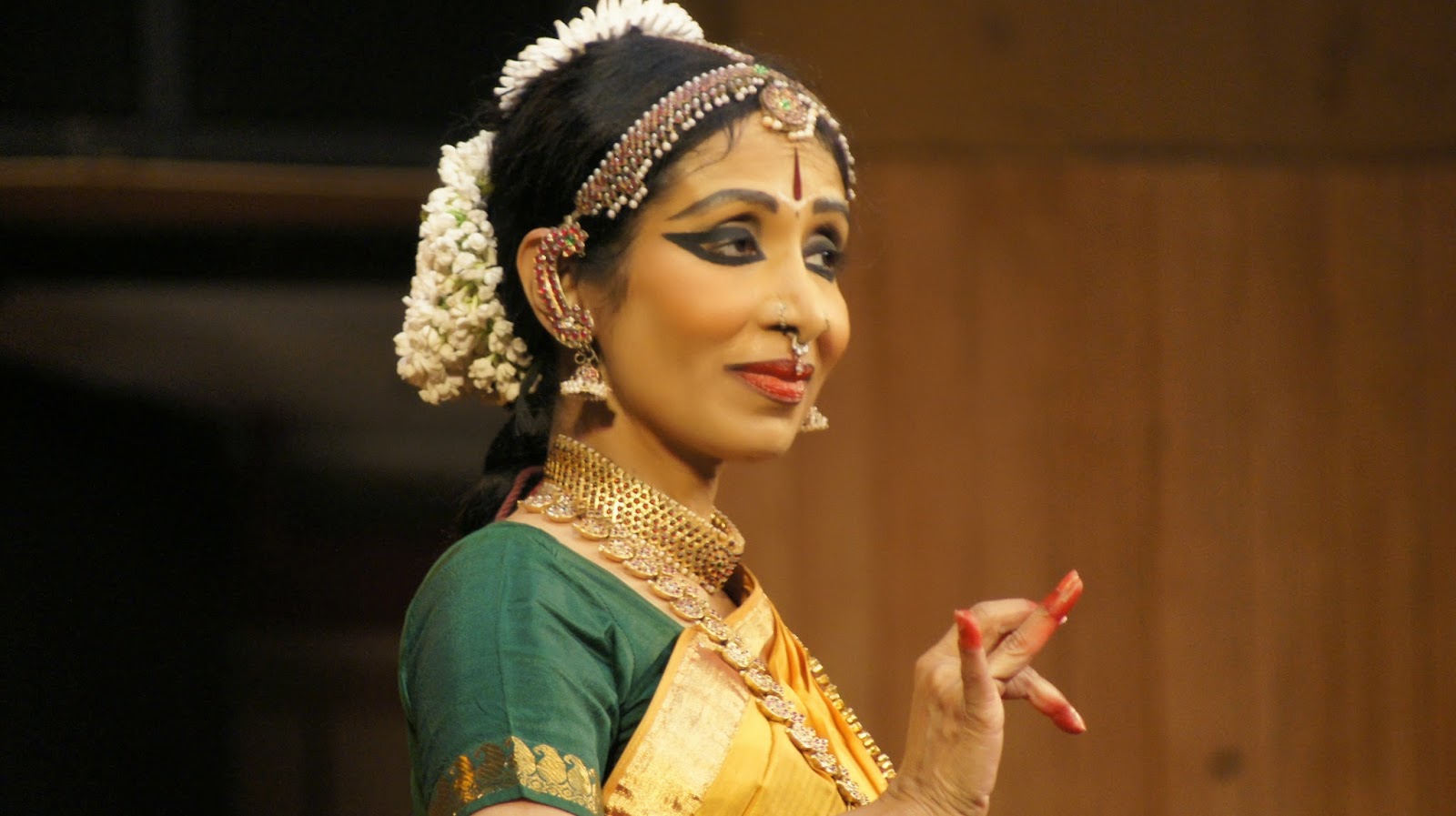 The first piece for the evening’s performance was an ode to Lord Vishnu, Om Namo Narayana. Lord Vishnu, reclines on the sheshshaiyya, Shriman Narayan, shriparameshwara, with a shankha-chakra-gada-padma, garland, kundal (ear ornaments), kamalmukha, kamalnayan, kamalnabhi (lotus being compared to the face, to the eyes and the navel) parampurush, paratapara (beyond this world), the darshan of the Lord Venkateshwara with the temple situated atop a hill is a blissful experience. The omnipresent Lord resides in all creation, the fragrance of flowers, tranquility of streams, churning of the ocean, heat of fire, blazing light and the sun, virtue and valour, and truth in the word. The piece ended with the chanting of Shriman Narayana. 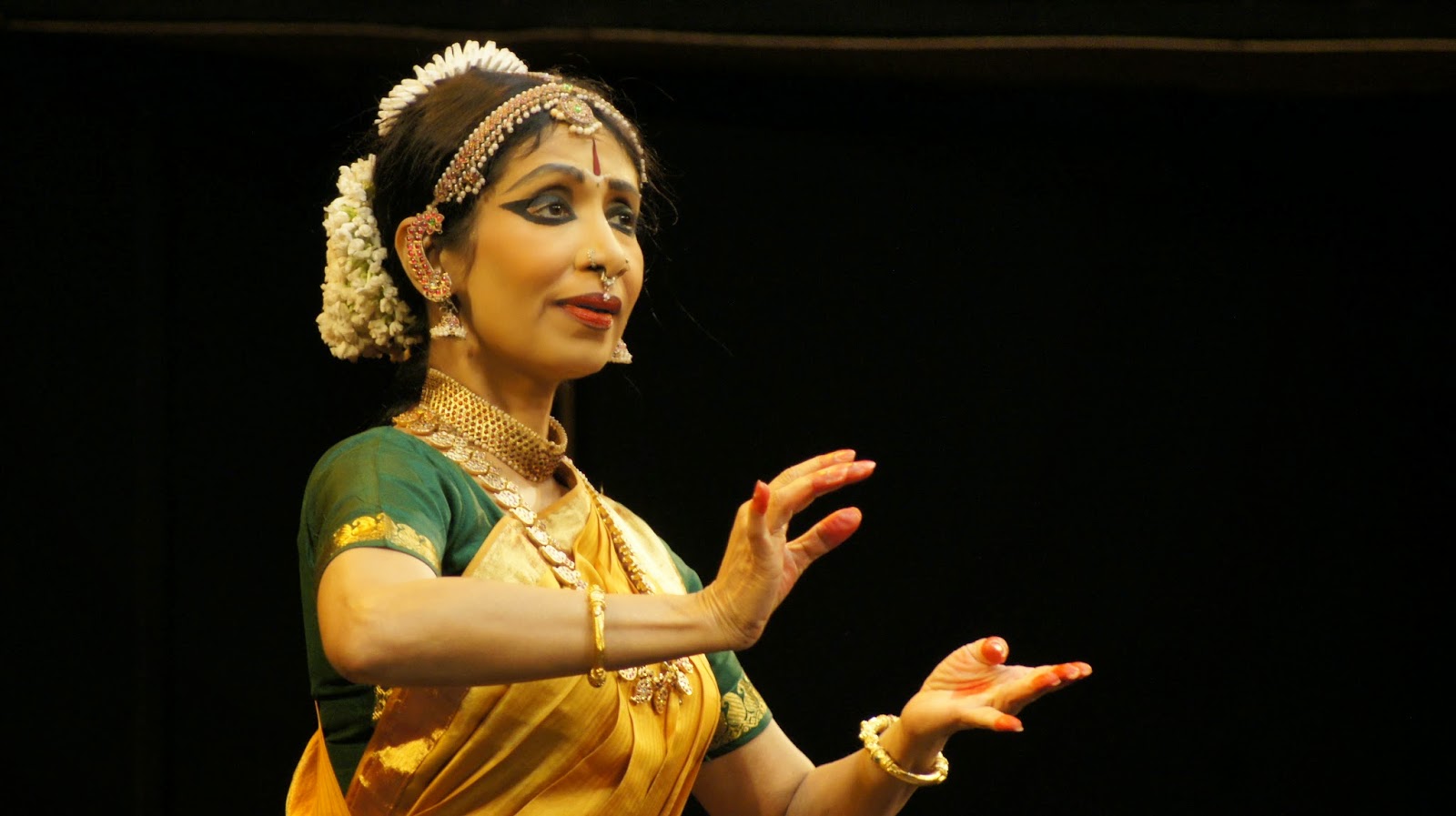 In the second piece, the poet switches from devotion to identifying with the goddess Alamelu Manga. The scene, according to Arundhati’s reading, is that of the bedchamber of the Lord, with the goddess. The mood is dark since the goddess is upset with him (khandita). Her tone is sarcastic and she makes it clear to him that she will come to bed and make love only when she is done with the anger. She tells him that she will answer him if he asks her a question, but is not ready to have a conversation with him. He can gaze at her, if he wants, and though she is beautiful as a flowering creeper, she will not intertwine with him like a creeper. Though it is the season for love, and the birds are cooing, but to her, it is cacophony, that is giving her a headache. He can hug her if he wants, but she is still burning with anger, and will not give her consent. Right now, he should be happy with what he has. The portrayal shows the lord approaching her with love, and teasing her with a flower, but she does not relent. The abhinaya by Valli was excellent, with her eyes expressing the wrath of the goddess. 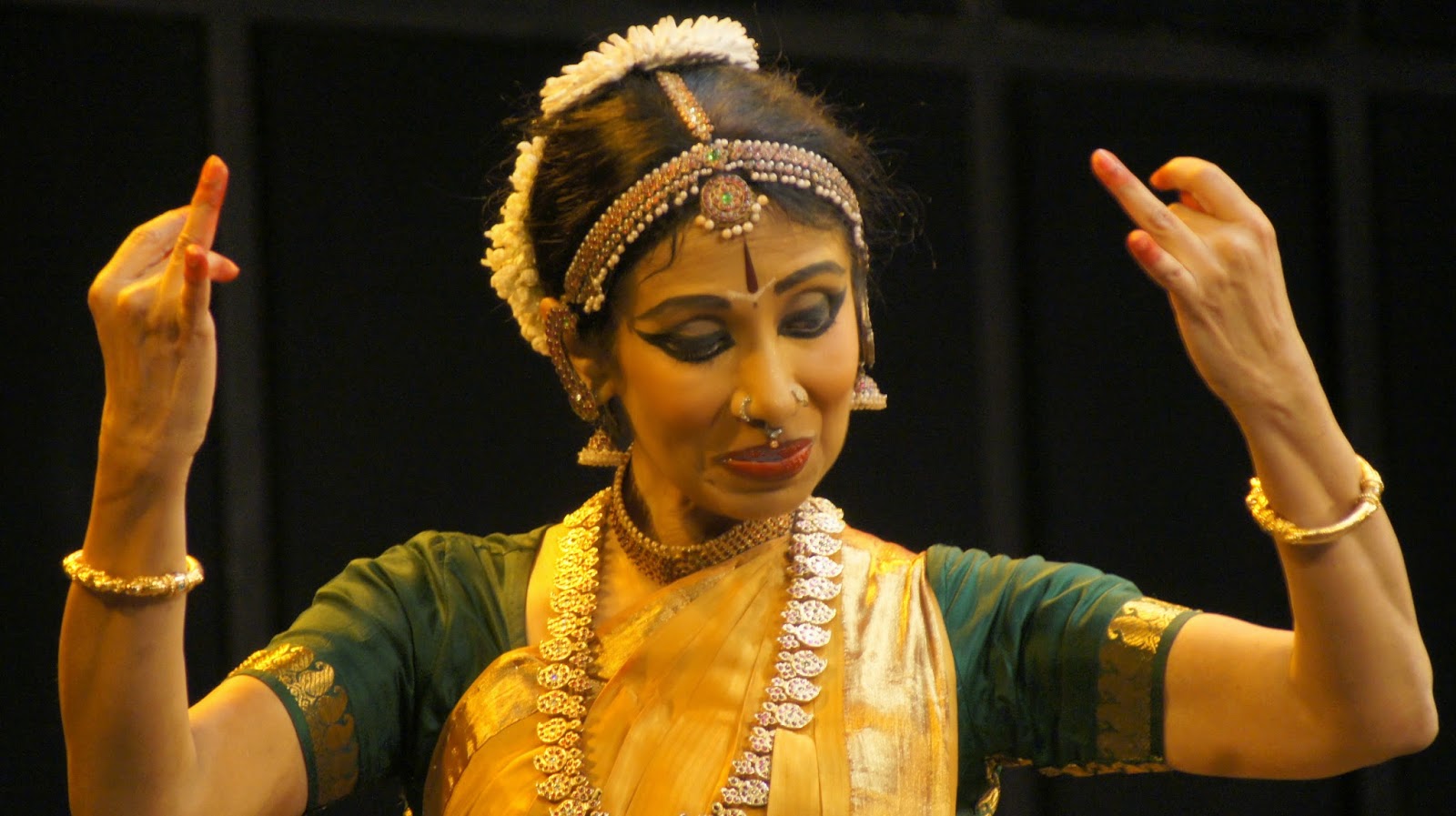 In the next composition, the goddess is shown in vivid colours. She is the vivacious dancer, dancing behind a sheer curtain, as the lord watches in rapt attention. She is like a cascade of beauty, like a half open bud, a gazelle, a peacock, a creeper, her anklets and toerings studded with gems, and their sound divine. Valli executed the piece with consummate poise and grace, with each action carved to perfection. 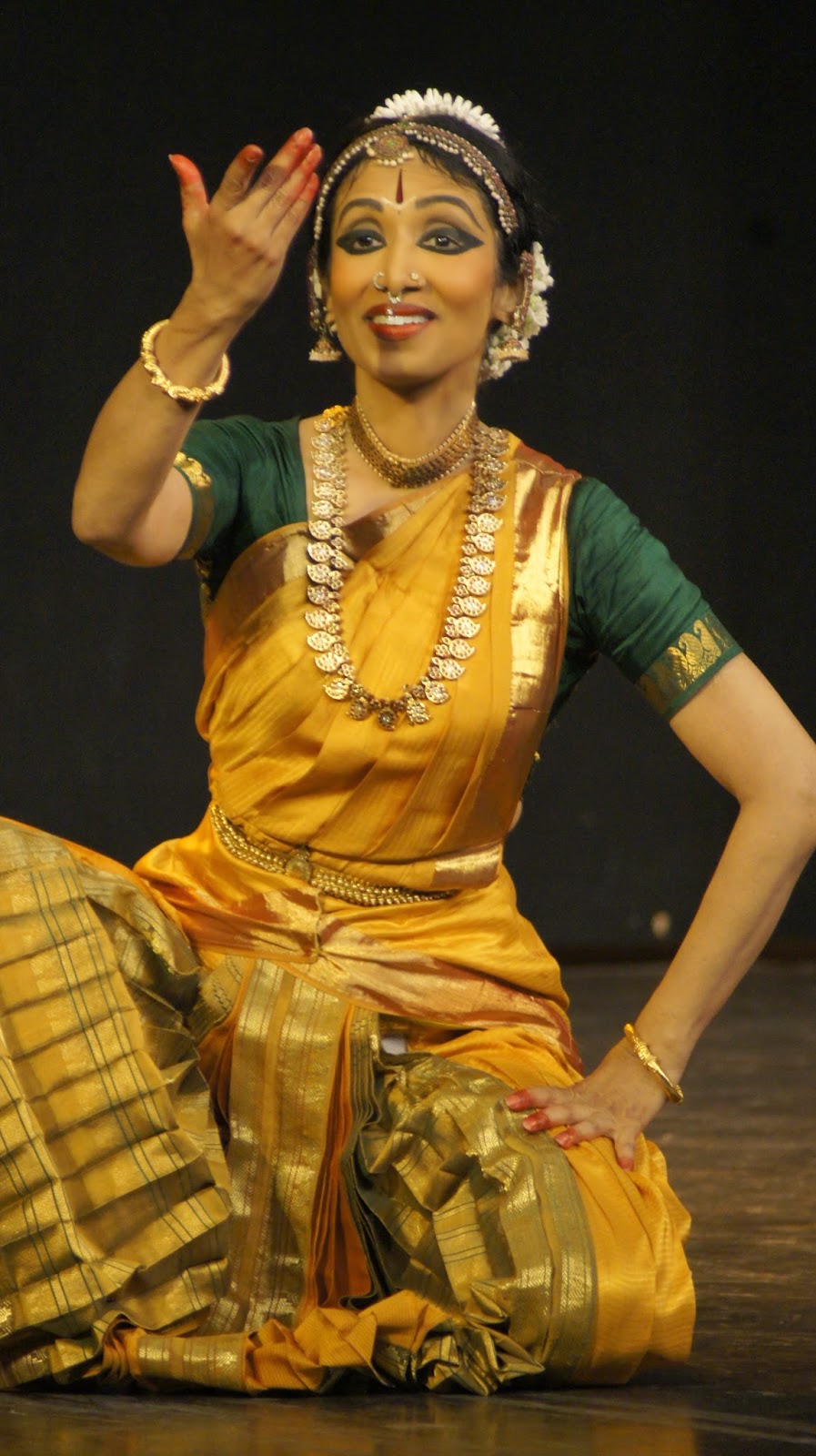 The next poem was an introspective one, with the title, Is There Some Way I Can Reach You? The Almighty has no beginning or end. He is so huge that the entire cosmos resides within him. He is omnipresent, all-pervading and yet beyond sight and tangible form. And if god and man are inseparable, then why this yearning and longing for him? Is there some way I can reach you? Valli said that the poet subscribed to the advaitavada, where god and man are taken to be one. For the portrayal, Valli showed the seva of the Lord - the bhakta gives the idol a holy bath, chandan-tilak, a garland made of flowers, and finally does an aarti and an offering of flowers at the feet. The Lord Venkatesh is vishwakaya (one who embodies the world) and agochara (one who cannot be seen through the worldly eyes). The yearning was portrayed by Valli with emotive abhinaya.

In the final piece, Valli wanted to end the performance with a positive note. The goddess Alamelu Manga is shown here to be very confident and sure, exultant and has a tongue-in-cheek attitude, is smug and exhibits mock humility. Playfully, in conversation with her friends, she makes humble, self-deprecating statements which imply that the Lord is truly lucky to have her. He accepts all that she does for him – in fact, he does everything for her, and totally listens to her. She possesses his heart and soul completely. He is the master, but she commands him and he serves her. He praises her, and she is always in his arms, where she becomes the master and he the slave. The attitude and gait of the goddess portrayed by Valli was very true to the character. She said that until she had read the translations of the poetry, she did not know what a feisty and contemporary thinking woman the goddess has been shown to be. The final image drawn of the goddess is that she looks at herself in the mirror, admires her moon-like face, lotus-like eyes, lets down her hair and fans herself with elan. It is fitting, at that moment, that dancer and goddess are indistinguishable – as is that linguistically, ‘Alarmel Valli’ literally is Alar Mel or Alamelu Manga, the goddess herself. 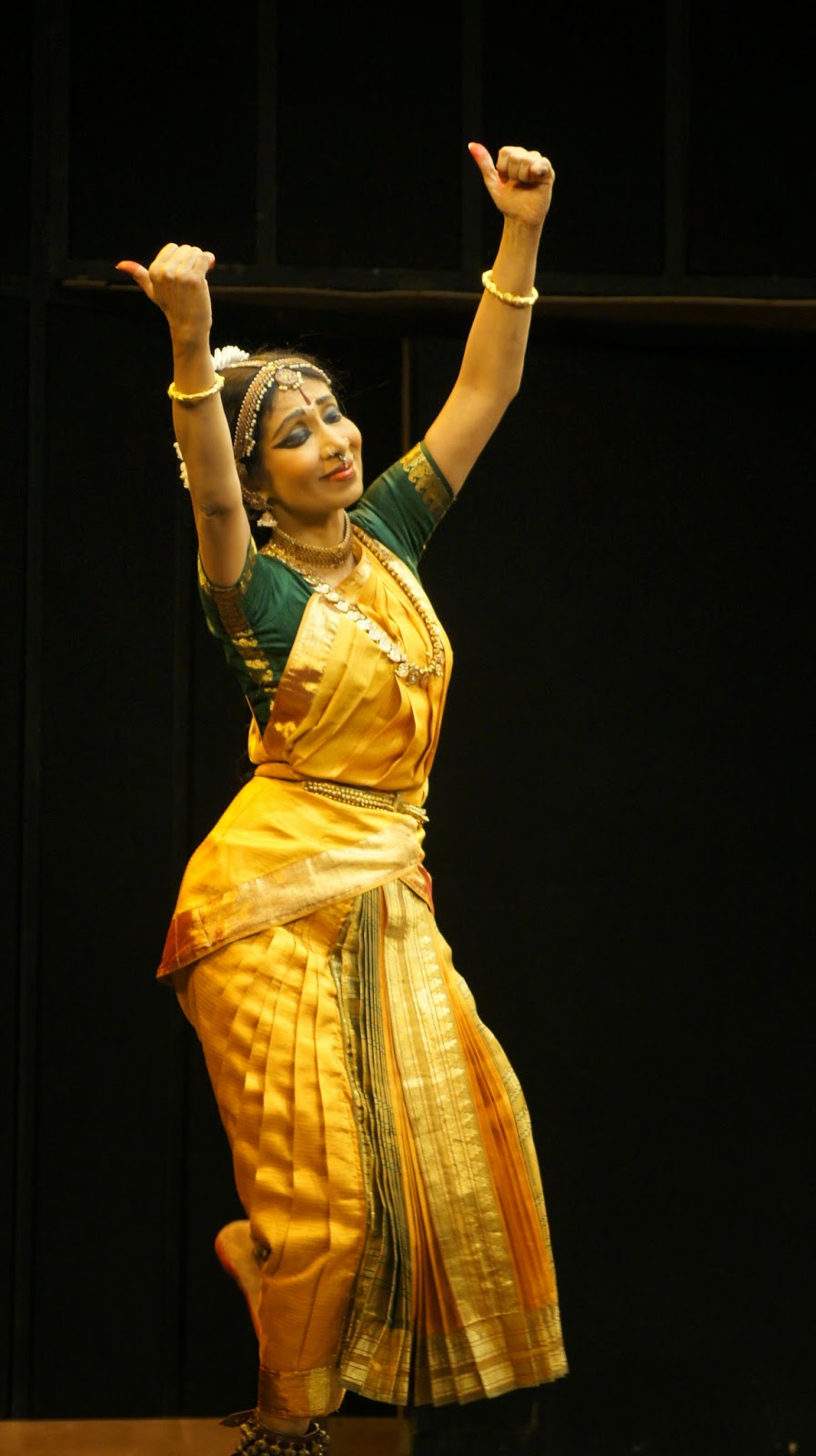