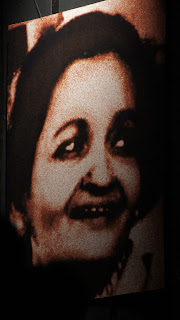 A tribute to Begum Akhtar, titled ‘Akhtari’, was presented by Vidya Shah and Danish Husain at the IHC in Delhi. Vidya Shah has already been introduced in this blog. Danish Husain is a theatre person and well-known ‘dastango’ or storyteller. The format for the evening was very simple and interesting. Danish narrated a few anecdotes from Begum Akhtar’s life in his dastangoi style and Vidya complemented them with her songs. Vidya Shah has been trained under Shanti Hiranand and Shubha Mudgal.

Begum Akhtar, born Akhtaribai Faizabadi in UP, was a celebrated singer of ghazal, dadra and thumri. Born in 1914, she achieved great fame as a singer and, thanks to her good looks, even had a short career in films when the talkies were introduced in India. She was honoured with the Sangeet Natak Akademi Award for vocal music, and was posthumously awarded the Padma Shri and Padma Bhushan.

Vidya spoke with great enthusiasm about her journey of exploring Begum Akhtar’s life. “I have learnt under Shanti Hiranand, who is a senior disciple of Begum Akhtar, so it was almost a sense of familiarity with her genius. I was curious and at the same time influenced and inspired by her person, since your person reflects on your creative approach. Since this is her centenary year, I wanted to do something special and different, something not like a biography but that which would bring out not only who she was but also my own perception of her. So I wanted to weave a story around her. When I approached Danish with the idea, he readily agreed to it. We then travelled to Lucknow and gathered whatever information we could about her, and also read whatever was written about her. It was a marriage of whatever we could understand of her eclectic personality and the iconic songs that she had sung. Plus, we also wanted to bring in accompanists who were an integral part of the performance at that time. Badloo Khan sahib, who had worked with her, volunteered to share some of his experiences. The repertoire of songs we chose was also a challenge since so much is etched in peoples’ memory and there are so many poets and sub-genres that the choice was difficult. But my purpose was to highlight her versatility. Hence, I made a choice of film songs, light dadras, thumri with khamaj and ghazals with raagdari and classic Urdu poetry in them. It was an effort to tell the story in a simple yet interesting manner,” she said. 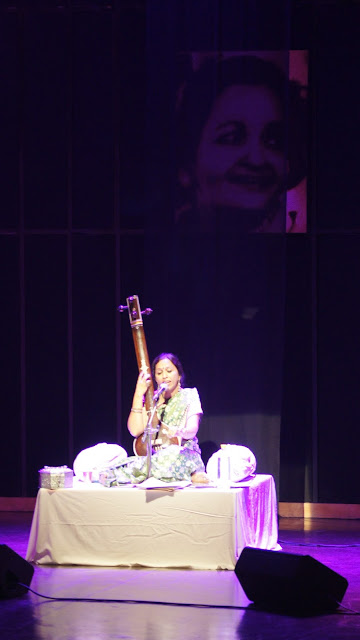 When asked if she had to make any voice modulations to suit the songs of that era, she said, “The more you listen to it, the more you get into the skin of the genre that you are singing. And every song requires a different approach and the song lends itself to that treatment. For instance, ‘Patli kamar lambe baal’ requires a different treatment than ‘Nanadiya kahe maare bol’. So things fall into place naturally.” 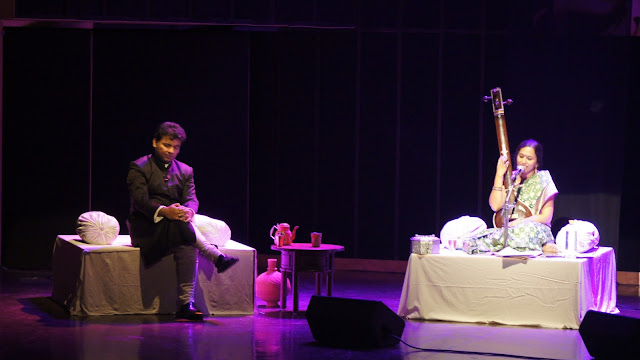 The stage was set in accordance with the requirement to accommodate Vidya as the singer, Danish as the dastango and the third pedestal for the accompanists. Danish began by relating the incident when the young Akhtari was taken to a peer by her concerned mother, Mushtari Begum. The mother was troubled by the ways of the young Akhtari. So the peer makes her open her book of songs and points to his chosen one. The first song sung was ‘Deewana banana hai toh deewana bana de, warna kahin taqdeer tamasha na bana de’. The song conveyed the Sufi message, ‘Log bazm ki har cheez ko parwana bana de’. Danish continued with the story of her life when, in 1914, she got the first proper training in music from Atan Khan sahib in Lucknow. He recognized her taste for semi-classical songs when he caught her listening to a song by a passerby bhatiyarin. Vidya sang ‘Nanadiya kahe maare bol, ek toh saiyaan moso rutho’. The song caught the folk strains. Next, they talked about Calcutta in the 1920s, when Gauhar Jaan was a big success there. When the young Akhtari recorded a song here, she started crying since it was believed that the microphone could steal the voice of the singer. She sang a song in the movie Roti by Anil Biswas – ‘Ulajh gaye nainava, chhute nahi chhudaye’. Vidya also emphasized the mood of the time by singing ‘Patli kamar lambe baal, chaloon jaise daminiya’. Akhtari had a sense of humour too – one day, she was sitting on a silver chair, gifted to her by the Nawab of Rampur, and complaining about him. When asked why she didn’t leave him, she said she was waiting for the matching table. She would joke with her accompanists too. Badloo Khan related an incident when she told one of her accompanists that his kurta was looking very clean, since he had just been married to a dhobin. The following songs captured the sense of humour – ‘Hamaar kaha maano rajaji, rajaji sauten ke lambe lambe baal ulajh mat jaana’ and ‘Hamari atariya pe aavo saanwariya, dekha dekhi balam hoyi jaaye’. In those times, there was a competition between the cities of Delhi and Lucknow in mannerism of speech and a lot of jokes were prevalent then. Akhtari always had that craving for social status, she wanted to get rid of the stigma of being a bai. It was then that she married Abbasi, and became Begum Akhtar. For this section Vidya sang a Daag Dehlvi composition, ‘Uzr aane mein bhi hai, aur bulate bhi nahin, jaan pyari bhi nahin, jaan se jaate bhi nahin’. A beautiful composition that says there is hesitation in both the beloved coming, and calling him. Following this turn in her life, Akhtari concentrated on becoming an ‘achhi ammi’ to her family, for which she took a five-year hiatus from singing. After this break, the song she recorded shows her pathos – ‘Koyaliya mat karal pukar, karajwa laagi katar’. Now was the time of her life when there was some hustle and bustle, and she started taking disciples. She did ganda bandhan as a guru, which was primarily a male-dominated tradition, so it brought out the feminist in her. ‘Ulti ho gayin sab tadbeerein, kuch na dawa ne kaam kiya’ was the following song.

She was friends with artistes of her time – Madan Mohanji, Pandit Kumar Gandharva, Anjani Bai, Jigar Moradabadi, among them - ‘Humko mita sake woh zamane mein dum nahin, humse zamana khud hai, zamane se hum nahin’. She was a live performer with a flair. Her nosepin would twinkle with her smile, and she would always inflect her song with a classical touch, since she was trained in pakke raag. This trait of raagdari is called ‘patti lagana’, like in the song ‘Jiya mora leheraye hai, chha rahi kaali ghatayein, sun ri koyal baanwari, tu kyun malhaar gaye hai’. She was the rockstar of ghazals of her time – ‘Ay mohabbat tere anjaam pe rona aaya, aaj kuch baat hai jo shaam pe rona aaya’. The last episode of her life Danish related was when Ustad Aamir Khan of the Indore gharana passed away. Begum Akhtar was very attached to him and stayed in mourning, locked in a room, for three days. ‘Hum bhi jaane wale hain, saaman toh gaya’. Her pain and solitude was captured in the song ‘Ibn-e-mariam hue, mere dukh ki dawa kare koi’. Accompanying Vidya were Badloo Khan on harmonium, Ghulam Ali on sarangi and Shanti Bhushan on tabla. They complemented her well. 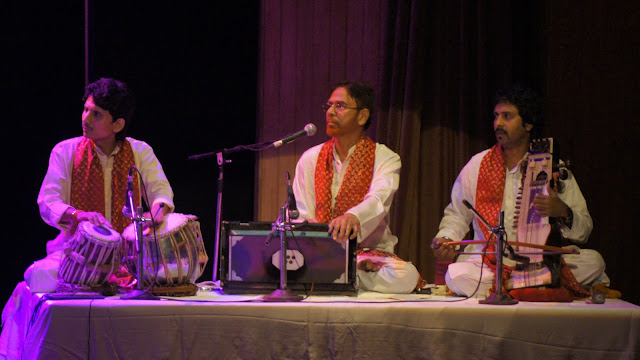