The final day of the 15th National Festival of Creative Arts, was held at IHC, Delhi on the 22nd of March, 2013. The first performance was ‘Ram’, a non-verbal experimental theatre, using excerpts from Bhavbhuti Ramayana, narrated through music, dance, masks and puppets, by Katkatha Puppet Arts Theatre, directed by Anurupa Roy. ‘Katkatha’ is a puppet arts trust formed in 1997. Anurupa Roy is a puppeteer and a trainer. The concept was by Vishal K Dhar. Anurupa roy said about puppet theatre, “Not enough people watch puppet theatre, but they should. There are a lot of pre conceived ideas about puppet theatre and we are trying to break them. There is a lot of power in this medium, in the relationship between the puppeteer and the puppet, and in the visual non-verbal story telling.”

I missed a few minutes of the show. From the point I started watching it, Rama was seen as ‘vanvasi’. He is frantically running and swinging his sword. The puppet of Rama was being manipulated by three puppeteers, the third one moving his legs. 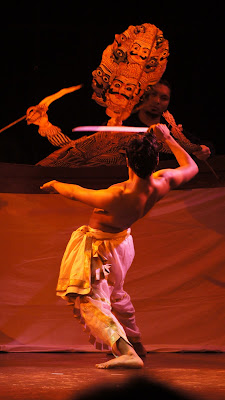 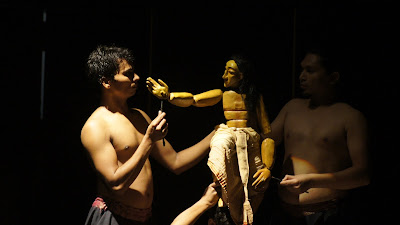 One of the artists then appeared as Rama and Ravana made an appearance as a puppet. A duel followed in which Ravana was killed by Rama. Sita awakens to find Rama beckoning her. The two appear as puppets again. Rama is filled with doubts as to Sita’s chastity. Rama’s thoughts were portrayed by puppeteers wearing masks which keep whispering to him. And so Rama abandons Sita. Rama becomes the king and rules Ayodhya for many years to come, but is left all alone. That is the concluding scene. The puppets were very fine in their craftsmanship.

Sharmishtha Mukherjee is a highly accomplished Kathak dancer. She has trained under late Pt Durgalal, Vidushi Uma Sharma and Shri Rajendra Gangani. She has performed extensively in Indian festivals and abroad. Her productions, though rooted in pure Kathak, have a contemporary theme and music, constantly merging the boundaries of Kathak and contemporary dance. 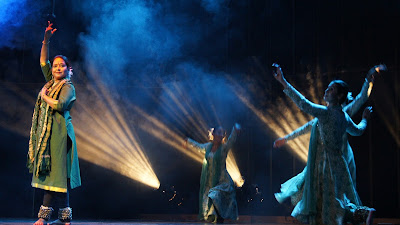 The production - She: Tales of Ancient Goddesses - relates the attributes of six Goddesses from the Rig Veda. Each of them represents a powerful natural phenomenon and abstract forces. Only one of them, Prithvi, is from the Atharva Veda. The production consists of six compositions, each dedicated to one goddess.

Aditi: She is the primordial energy, the original force behind all creation, the mother goddess. She is the devamatri, the heavenly bodies are born from her. The dancers wore red and black dresses to depict Aditi.

Vac: The goddess of speech. She is the vehicle of knowledge, the harbinger of communication, and the power of rishis. She helps grasp and exchange knowledge. The dancers portrayed Vac by trying to hear echoes, two of them trying to communicate, first feel and then express their experience.

Prithvi: The mother earth, vishwadharini, ratnagarbha, ratnavali, vasundhara. The dancers wore green costumes to show the vegetation on earth. She bears all men, women and beasts. 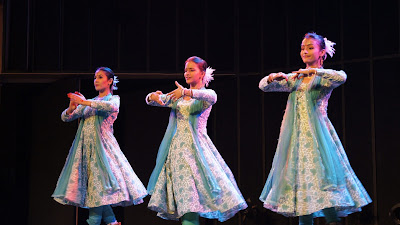 Aranyani: She is alone and fears none. She is the goddess of forests. She shelters those who seek refuge from her. This particular piece was my favourite. The dancers portrayed Aranyani by tapping their feet and ghungroos, depicting the sounds of the forest.

Ratri: The goddess of the night. Mysterious and powerful, containing potential for destruction, only to pave the way for new creation. She is the ultimate knowledge. The dancers changed into grey costumes. The chakkars in this piece were executed with great finesse.

Usha: The goddess of dawn, the final awakening of the human spirit. She is the medium of illumination. She makes the path easy for travelers. She has a golden complexion and is the bestower of all wishes. The dancers wore white costumes with coloured odhnis to depict Usha. The group showed great coordination in this piece. The performance ended with a stotra for the invocation of Shakti.

The footwork and technique of the dancers was impeccable, especially in the fast chakkars. The group maintained a well-rehearsed formation and kept pace with quick changes of costumes. Music was contemporary, by Advaita; choreography and concept by Sharmishtha Mukherjee; costumes by Sharmishtha herself. The dancers were Shivani, Shailja, Tripti Sangwal, Shobhna Jha, Kartika Singh, technical director - Nitin Jain. On the whole, it was an immense effort.
Email Post