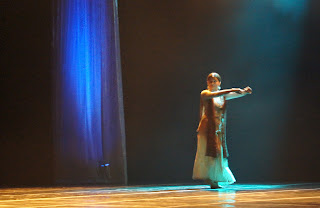 ‘Love, longing and transcendence’ was the concept and title of the performance by Malvika Sarukkai at Kamani auditorium on the 28th of September. The entrance had a rangoli of flowers with floating lotuses. The evening began with an illustrated lecture by art historian BN Goswamy on Sufis as seen by the Indian painter, titled ‘Inward Journeys’.


Malvika Sarukkai is an acclaimed Bharatanatyam dancer. She has been trained under Guru Kalyanasundaram and Guru Rajaratnam, for abhinaya under Guru Kalanidhi Narayanan, Odissi with Guru Kelucharan Mahapatra and Guru Ramani Jena. She has participated in major dance festivals globally. She has received several awards, notably the Padma Shree 2003, Sangeet Natak Akademi award, and the Raza award. She has made remarkable contributions to Bharatanatyam, and has also done creative dance choreographies merging with contemporary dance and collaborative productions. ‘ 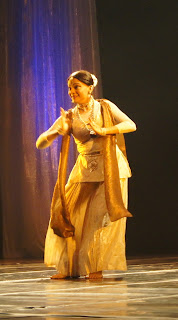 Love, longing and transcendence’ is based on the poetry of Amir Khusrau translated into classical dance. She said it was an attempt to seek the spiritual, moments with the ephemeral, the elusive, and transforming it into the language of Bharatanatyam has been a search and a challenge.

The stage had four panels of silver curtains flowing from the ceiling. For the first part of the programme, the recorded music composition was by Shubha Mudgal and Aneesh Pradhan. The motifs of the drenched lotus and the surging river resonate as recurring symbols of love. Such imagery was used to build a contemporary piece of dance to show the yearning to merge with the ‘one’.This piece was based on Rag Jog and translated from poetry by Amir Khusrau. The poetry was translated into English by Priya Sarukkai Chhabria. In poetry, God is portrayed as the beloved who lives across the river of worldliness or maya. The seeker or the bhakta is looking for means to go across. The boatman is the Guru. The first piece was the river of sorrow. ‘Woh gaye balam, nadiya ke paar, aape paar utar gaye, hum toh rahe majhdhaar’. The seeker is left caught in life’s currents, midstream. Malavika wore a black patka on her white ghaghra costume for this piece. 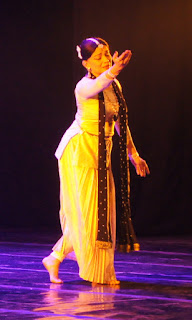 The second piece was the river of pleasure. ‘Khusrau nadiya prem ki, bhai re mallah ho, humko paar utar’. He is ready to give the boatman all the jewels he possesses and persuades him to take him across. She wore a red odhni for this piece. The third was the river of release. ‘Dekh main apne haal ko, roun zor-zor’. For he is a lustrous jewel, and I am blemished. She wore a blue jacket for this piece.Malavika showed all the emotions beautifully. The hands and feet had slow flowing movements. The high point of the piece was Shubha’s rendition of the verses in her powerful voice and Aneesh’s tabla. 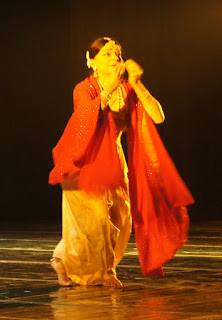 In the next part of the performance, the search for the spiritual was reflected in the interpretation by Malavika. She danced with her accompanying artists performing live. The various aspects of life were reflected in various verses. ‘The Bird’ – seeking release with stamping feet and arms reaching for the sky. ‘The Ocean’ of life jostles us. ‘Dance of the water drops’ based on Rag Hamsadhwani and teen taal. The drops of water dance singly and in collective rhythms to create patterns. Malavika portrayed the drops of water with fluttering fingers dancing in various patterns. The poem – ‘Khusrau darya prem ka, ulti wa ki dhar’ – reflects the ultimate truth about divine love. To go across, you have to surrender yourself in totality. ‘The Golden River’ in Rag Poorya Dhanashree and teen taal showed the path of the river to merge with the ocean – ‘Sunaad Tarangen’. The lighting created a beautiful golden glow. The piece about the dance of the water drops was beautifully executed. 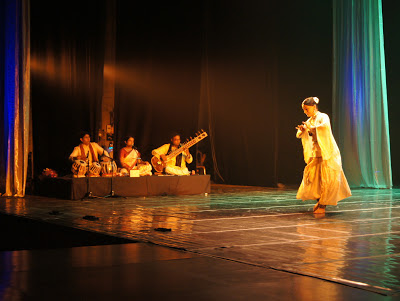 For the rest of the performance, for me as a layman, she could not hold the theme and make a connect with the audience. Nevertheless, it was a huge effort.
Email Post