With Geeta Chandran performing on the theme of Krishna Bhakti, exploring the three ‘bhavas’ – ‘Adbhuta’, ‘Vatsalya’ and ‘Shringara’ -  it was bound to be a divine experience. On the 15th of April, Nandalala Sewa Samithi Trust, a social, cultural and charitable organization based in Chennai, organized a Bharatanatyam performance by Padma Shri Geeta Chandran at Triveni Kala Sangam. The event was held to commemorate the 24th anniversary of their Delhi chapter. The foyer of the venue was decorated with flowers done in the style of the logo of the Samithi and it was looking awesome.
Geeta Chandran is the greatest exponent of Bharatanatyam in present times. She has been briefly introduced in this blog. She is not only a great dancer but also a great thinker, and puts a lot of research into her performance. She puts her soul into it and every expression comes from within. 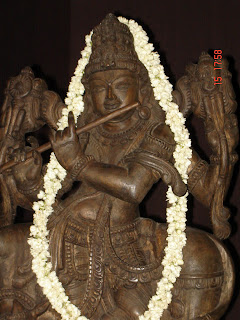 Geeta gave a brief idea about the theme of the evening’s performance. “A performance is special if your guru asks for it, and more so when the theme is ‘love’. Today, I decide to give it three components – ‘Adbhuta’, because Krishna is the ‘avatar’ of ‘Vishnu’ and the ‘adbhuta’ aspect of Krishna has always stayed with me. The amazement of the beauty of Krishna always stays. The next is – ‘Shringara’. It is the rasraaj or the king of rasas. It embodies karuna, togetherness, love and then viyog. The varnam I chose incorporates all these emotions or rasas. “Krishna ne begane baro” is one piece I learnt when I was just eight or nine years old and I have performed it now again. I do not understand why we perform this verse as mother and baby, since the verse does not say so. One day, when I was performing it as a bhakta yearning for the divine, I had my moment of realisation. There is an epiphany about it – in fact, there is an epiphany about all that Krishna did. There is a moment of realisation and then the logic is clouded by maya, and you tend to go back. Yashoda also had an epiphany – that is how I felt and I tried to convey it, though I do not know how much of it went across to the audience. I did this piece entirely for myself. And lastly, I always end my performance with a sankirtan because that is the only form of bhakti that is prevalent in kalyug. It is the only path to nirvana, piece and tranquillity. So chanting together is the panacea.”
The first piece was a Govindavandana, worshipping Lord Krishna as the incarnation of Vishnu, highlighting the adbhuta rasa. “Vishwaroop chaturbhuj kamalnetra kamalmaline kamalnabhaye kamalpadaye kans-vansh-vinashaye venuvadana sheelaya gopal lolakundal dharine”, one who resides in the heart of Rukmini and gopis, “sansara sagare uddharo”. These attributes of Lord Vishnu were depicted beautifully by Geeta through her dance, invoking amazement at the charisma of the Lord and pleading with him to help us across the oceans of worldliness. 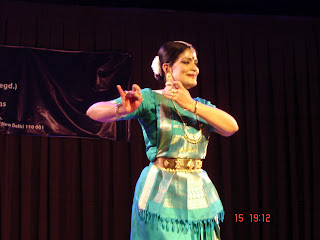 The second piece was based on the shringara rasa, “Gayati vanamali madhuram”. It was based in Raga Hamsadhwani. Krishna is frolicking in the kunj on the banks of the river Yamuna, “pushpasugandhit, sumalaysamire, munijan sevit yamunatire”. The birds are singing and the Lord is stealing the hearts of the gopis with his amazing looks and the melodious flute. “Kujit shuk-pik kunj kutil alak vanshirav purit”. The depiction of a playful Krishna was done beautifully by Geeta.
The varnam followed next in the shringara rasa – a sakhi is addressing Madhava and relating to him the viraha of the nayika. The nayika is sick with love and cannot stand anything that reminds her of Krishna. The bed reminds her of the amorous times spent on it. She is struck by the arrow of love and the sakhi pleads with Krishna to put an end to her suffering. The three characters were enacted by Geeta with a lot of elegance and the pace and rhythm of the varnam left the audience mesmerised.
The last piece, “Krishna begane baro”, depicts the vatsalya rasa. Geeta did amazing abhinaya on this composition. It actually appeared as if she were the mother Yashoda playing with her son, the baby Krishna. Yashoda is looking around the house for her son who’s running away from her and hiding from her. So she makes butter from her biloni and that tempts him to come to her. She offers him butter for a kiss. Then she feeds him, playfully puts butter on his face, dresses him up in pitambari and applies sugandhi and tika. But Krishna breaks the matki as soon as she is gone and scatters all the maakhan. She scolds him at seeing this and pulls his ear for it. Then it is a moment of epiphany and she sees him as God. But maya takes over and she forgets about the awakening, lifts her son on her shoulders and walks away. 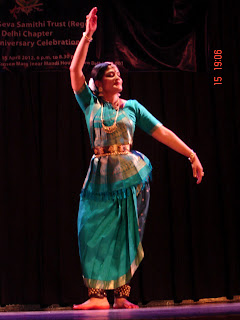 The performance ended with a sankirtan, “Jagamohana radha ramana vanamali vasudev shashivanana sarsijnayana”. It was the final prostration to the Lord and Geeta put her soul into it.