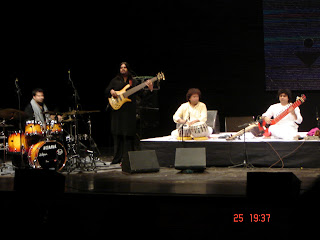 he lawns of Kamani Auditorium are decked up with rows of flowers of all colours, announcing the advent of spring. A beautiful rangoli of flowers welcomes you to the music concert, Aadi Anant, organised by the National Centre for Performing Arts, Mumbai. The music festival is based on the concept of eternity, as the name suggests.
On January 25th, internationally renowned percussionist Taufiq Qureshi performed with Niladari Kumar (sitar and zitar), Gino Banks (drums), Satyajit Talwalkar (tabla), Sheldon D’Silva (bass) and Angelo Fernandes (keyboard). Taufiq Qureshi, one of India's ace percussionists, is also an acclaimed composer. He is the son and disciple of the legendary tabla maestro Ustad Allah Rakha Khan and brother of Ustad Zakir Husain. He is not only rooted in Indian rhythms, but also has a phenomenal command over contemporary world percussion. He has performed at prestigious music festivals across the world and has also released many albums. He featured on the 2009 Grammy award winning album, Global Drum Project. For that evening’s performance, he played the ‘djembe’. Taufiq said that the ‘djembe’ is an African drum, but he plays it like the tabla. Since tabla is a descendant of the Persian ‘tabal’, he calls his instrument the ‘tabal djembe’.
Niladari Kumar is the son and disciple of sitar maestro Pandit Kartik Kumar. He started learning sitar at a very early age. He has a lineage of five generations of sitar players and this, coupled with many years of learning, has led to a mastery of technical skill and a profound understanding of diverse gharana styles. He is hailed as the more serious young exponent of Indian classical music and yet can connect to the progressive music lovers. He has many performances, albums, and awards to his credit, notably the prestigious Sangeet Natak Academy award won in 2007. For the evening, he played on sitar and the zitar, an electric sitar. That’s what he described the new instrument as, and let it speak for itself.
Gino Banks was on the drums. He is the son of the legendary jazz musician Louis Banks. On the bass guitar was Sheldon D’Silva, the tallest and heftiest member of the group. Satyajit Talwalkar on the tabla is the son of Suresh Talwalkar, a great tabla player. Jazz pianist and composer Angelo Fernandes, who has worked for Bollywood movies also, was on the keyboards. That evening, besides skill, there were a lot of great genes there too!

In the backdrop was a reproduction of a painting titled ‘Bhoomi’ by S H Raza. It was a perfect symbol for the theme of the evening.


Taufiq began the concert with the sounds of breathing, which he said was the first rhythmic sound a baby hears. Life is sustained by rhythms. Then each of the musicians played individually. Niladari began with soft soulful music which then transformed into fusion contemporary music on the zitar. Both were equally mesmerizing. Gino played on his drums with a lot of flair, twirling his sticks and setting the heart racing with his pulsating beats. Taufiq played on the djembe in classical ‘kayda’. He also played the sounds of a train moving, two trains going in the opposite directions and then a train going over a bridge. Satyajit is very versatile on the tabla. He played classical Indian beats as well as fusion. Sheldon played on the bass guitar as nobody else could. His technique and the way he struck the cords were very different. Taufiq and Niladari did a classical jugalbandi which was very melodious. The three percussionists played together and the music they created was fantastic. Finally, the entire group played together with Niladari on the sitar and then on the zitar. Lastly they played ‘Raghupati Raghav Raja Ram’. It was a confluence of instruments, musicians and music styles. It was an evening of a classical Indian rock concert.

It is God who is ‘Anadi’ and ‘Anant’. Music in this form has no beginning, no end, no definitions and no barriers. Music is God.
Email Post