On the 8th of January, 2012, His Holiness the Gyalwang Drupka delivered a lecture on Happy Mind Happy Life – his philosophy on how to lead a happy life. He is the spiritual head of the Drupka Lineage, and is an active environmentalist and educator. He embarked on an eco padyatra from Mumbai to Bhopal via Ajanta-Ellora, spreading the message of peace, harmony, goodwill and respect for the environment.
He delivered a discourse at the India Habitat Centre in Delhi amid a host of followers on the culmination of his yatra or green odyssey. He is the UN Millennium Development Goals Award recipient and a Green Hero of India. He lead Ladakh in breaking the Guinness World Record for ‘Most Trees Planted’. He is the founder of the school in Ladakh which featured in the Hindi movie ‘3 Idiots’.
His Holiness started his lecture by directly addressing the problem of rubbish on the streets. People, he said, are so busy making money and running after conveniences and material things, that they forget to look at the garbage and bend down to pick it up. Natural disasters are created by man himself. Man abuses nature to such an extent that he makes the disasters happen. So renouncing the world and family is not going to address this issue. The need of the hour is to think practically and radically and pledge to keep the environment clean. According to him, he undertakes this ‘pad yatra’ to raise awareness about the damage being done to the environment. The monks and nuns do their routine meditations and chanting during the yatra, but it is mainly an effort to clean the environment, to improve life for all collectively. He said that meditation is done to attain a state of happiness, but the actual sublimation is attained by understanding the suffering of others and then helping them. Doing something is more important than not doing anything. Happiness stems from a happy mind which in turn rests in a healthy body. For a healthy body, it is important to keep the environment clean.
The spiritual path to happiness is also another path, but it’s more mysterious and involves renouncing worldly things. ‘Buddha’ is a state of mind which is happy and content. HH said that he has been meditating and chanting since the age of eight, and his spirituality has driven him to practically do something for others. And this has brought him much more peace and happiness than meditation. So, attaining happiness has a spiritual path and a worldly path, that of understanding suffering and doing something to alleviate it. 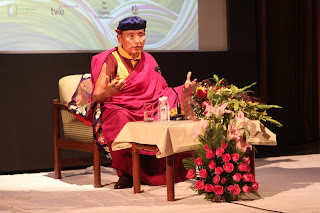 Whether one is spiritual or not or one is religious or not, nature has to be respected. If it is abused beyond a certain limit, it rebounds with fury. So be friendly with nature. Then your convenience should not come in your and neither your financial status. So do not create too much garbage and whatever garbage you see on your way, bend down and pick it up.
Happiness is a state of mind and the mind has the ability to create both good and bad. Some sufferings are created by the mind also. These are psychological sufferings that are unwanted and unnecessary. These can be corrected by meditation and cultivation of religion and values. But sufferings brought on by the fury of nature have to be corrected by action.
The movie showing the eco padyatra showed the passage of the monks and nuns to mountains to collect garbage, and also clean the rivers of the filth in them, which makes the water toxic. Despite troubles and tribulations, they carried on the good work. Also shown was the creation of the Guinness world record of planting the maximum number of trees on October 10, 2010. 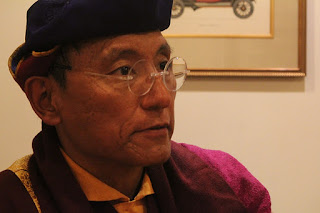 As the citizens of this world, all of us should feel ashamed that a person who has renounced the world should have to take up such a mission. A country which is rich in culture, heritage, spirituality and morality could not impart civic education to its citizens. Where do we lack?
Email Post