On the 5th October Parvati Dutta and group from Aurangabad brought an amalgam of seven dance forms- Odissi, Kathak, Bharatnatyam, Kuchipudi, Manipuri, Mohiniattam and Kathakali.
Parvati Dutta is a versatile kathak and odissi dancer. She is also a Guru and director of the Mahagami Gurukul, Aurangabad. She has been the disciple of Pt. Birju Maharaj (kathak) and Smt. Madhavi Mudgal (odissi) and has also received guidance from Guru Kelucharan Mohapatra.She has performed in India and abroad.

The performance began with  Nirgeet, an attempt to showcase the dance vocabulary of the ancient period. It revolves around the rituals performed in the ancient times to appease the Gods and pacify the demons .Nirgeet comprised of abstract utterances, melodic and rhythmic patterns coupled with symbolic gestures and motifs. These beats and chants were enunciated by the dancers in each of the seven forms of dance and were beautifully executed. The culmination was in “Sageet’ in praise of Lord Shiva. The verses praised the Lord as the one who resides in the Kailash Parvat, has the moon as his ‘mukut’ or head dress and snakes as his ornaments. The seven dancers enacted the verses in their own vocabulary.

The next composition was titled, ‘Sannidhi’ or flowing together. The seven holy rivers of India were symbolically represented by the seven dance forms: Narmada by kathak, Kaveri by bharatnatyam, Sindhu by kathakali, Godavari by kuchipudi, Yamuna by Manipuri, Ganga by odissi and Saraswati by mohiniattam. Each dancer performed verses on each of the rivers. Every dancer showed the flowing of the river individually and then together into each other. The river Yamuna is associated with Krishna Leela, particularly the ball game on its shores and then the vanquishing of Kalia Naag. Ganga resides in the hair of Lord Shiva and is called Shankar Mauli. The blending of the rivers in the form of dance, music and verses held the audience spell bound. The performance ended in ‘Shankha Dhwani’ and ‘Aarti’. Parvati Dutta conceptualized the presentation and performed the odissi portion with extreme poise and grace.

This is what the nation requires: Rather that ‘Apni dhapli apna raag’, one dhapli one raag and total blending of all interpretations. 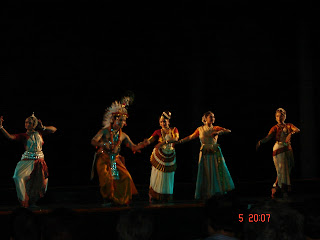 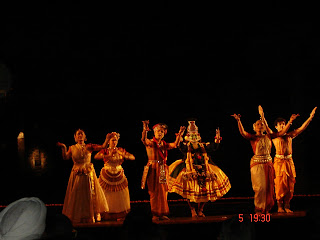